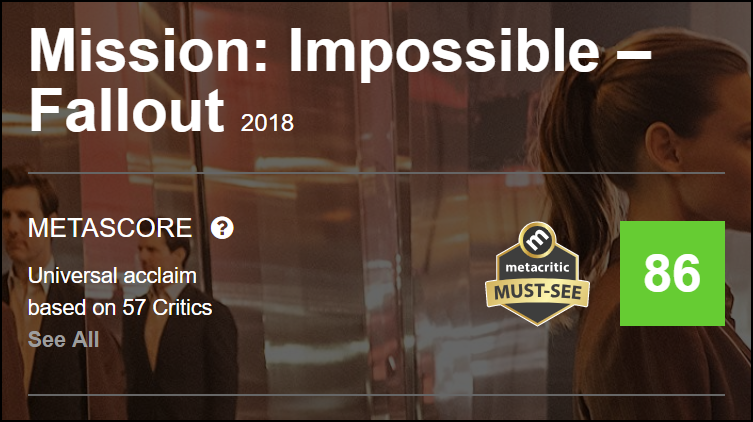 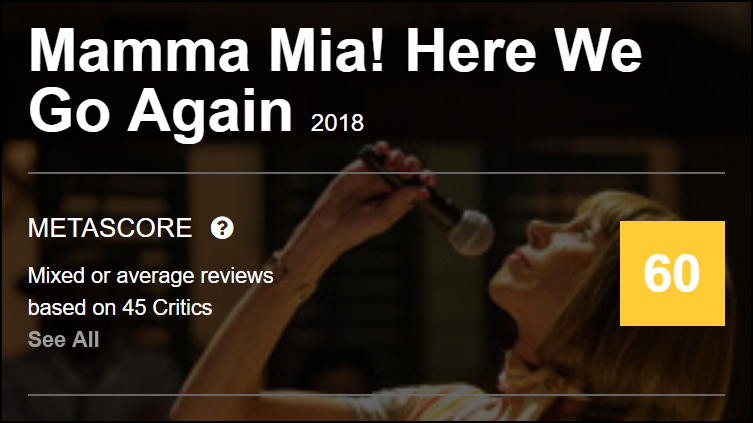 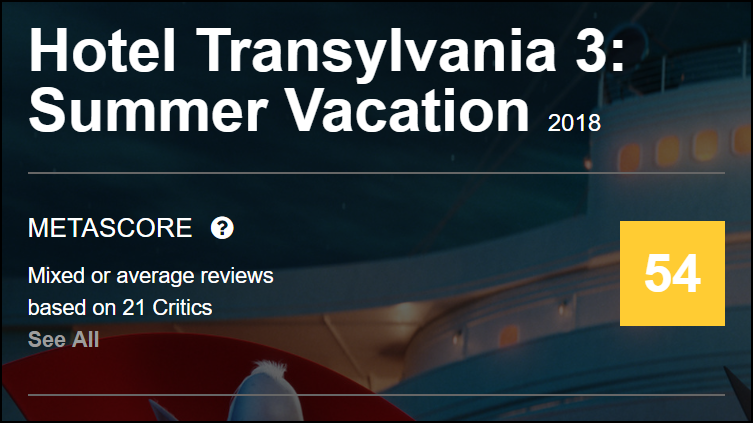 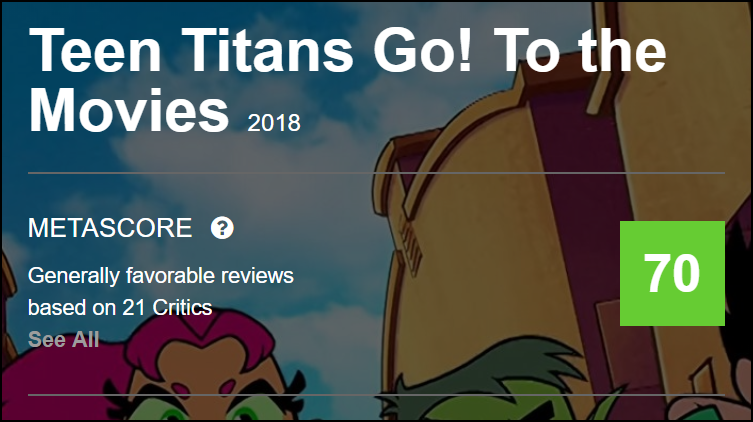 Tom Cruise has pulled off one of his most successful missions yet.

Still, “Fallout” signals a return to form for Cruise, whose last few box office offerings had less than stellar theatrical runs. “American Made” fared best, while Cruise’s reboot of “The Mummy” and “Jack Reacher: Never Go Back” suffered from high production costs and bleak reviews.

Overseas, “Fallout” brought in $92 million when it premiered in 36 international markets. Imax accounted for $12.5 million of its $153.5 million global opening. “Fallout” opens in China on Aug. 31.

“With an opening like this, we’re going to play well throughout the summer,” Kyle Davies, president of domestic distribution at Paramount, said. “Tom Cruise and Christopher McQuarrie deliver a thrill ride that’s so real, and that’s creating word of mouth.

Davies attributes Cruise’s tendency to perform his own stunts (one of which caused the actor to break his foot on set!) for increased interested in the action film.

“There was a hunger for something real and exciting,” Davies said. “There’s something very special and raw knowing that the filmmaker and star put it all on the line to create entertainment for moviegoers.”

“The ‘Mission: Impossible’ franchise is a crown jewel for Paramount Pictures,” said box office analyst Paul Dergarabedian. “There is a long track record that shows that they can rely on Cruise and his creative partners to deliver time after time. As long as Cruise can keep delivering the goods, ‘Mission: Impossible’ is an annuity that will keep paying dividends for the both Cruise and Paramount for years to come.”

The sixth installment has also received the some of the best reviews for the franchise. Its 97% certified fresh rating on Rotten Tomatoes is the highest for both the series, and of any Cruise movie. Audiences seem equally enthusiastic, as “Fallout” holds an A CinemaScore.

“Teen Titans Go!,” with a surprising 91% approval on Rotten Tomatoes, is based on the DC Comics television series created by Michael Jelenic and Aaron Horvath. Much of the TV cast, including Greg Cipes, Scott Menville, Khary Payton, Tara Strong, and Hynden Walch, reprised their roles, while Nicholas Cage, Will Arnett, and Kristen Bell voice new characters.

Among holdovers, Universal’s “Mamma Mia! Here We Go Again” stayed at No. 2 with $15 million, dropping 57% during its second outing for a domestic total of $70 million. Overseas, the jukebox musical picked up $26.6 million, taking its tally to $96.8 million internationally and $167.3 million worldwide.

“The Equalizer 2” was not far behind, picking up $14 million in its sophomore frame. The first sequel of Denzel Washington’s career has earned $64 million.

Another Sony title, “Hotel Transylvania 3,” landed in fourth, picking up $12.4 million in its third frame. In total, the animated adventure has amassed $119 million.

Meanwhile, Disney-Pixar’s “Incredibles 2 is nearing the coveted $1 billion milestone. With $573 million domestically, the superhero sequel is now the highest-grossing animated release of all time and ninth-best North American title. In its seventh outing, “Incredibles 2” earned $7.3 million for a domestic tally of $573 million. It has made $997 million worldwide, including $424 million internationally.

At the specialty box office, Lionsgate’s “Blindspotting” made $1.3 million when it expanded to 523 locations for a domestic tally of $1.7 million.

The North American box office is up a healthy 7.8% compared to 2017, according to comScore. Coming off last year’s dismal popcorn season, the summer box office is at an uptick of 10.2%.
Click to expand... 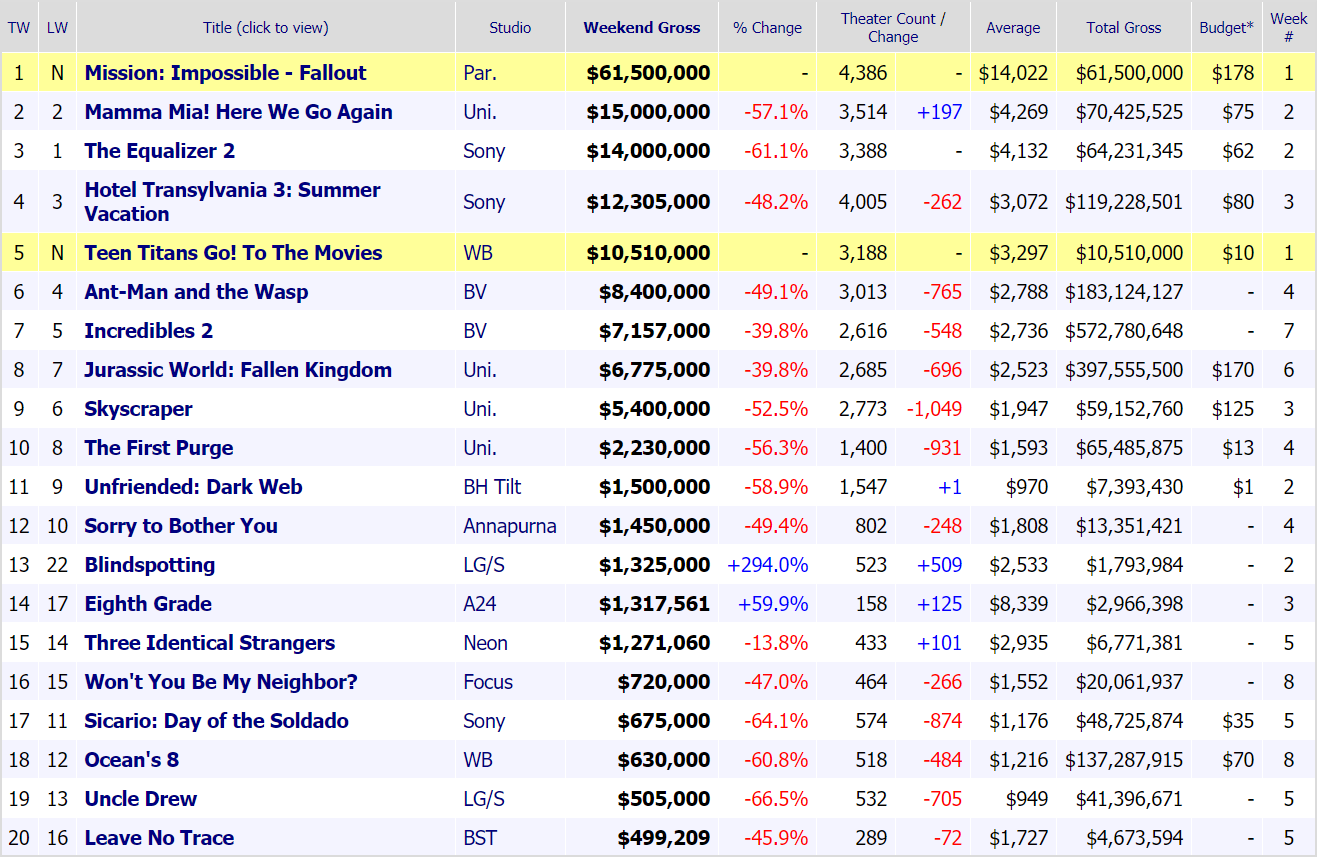 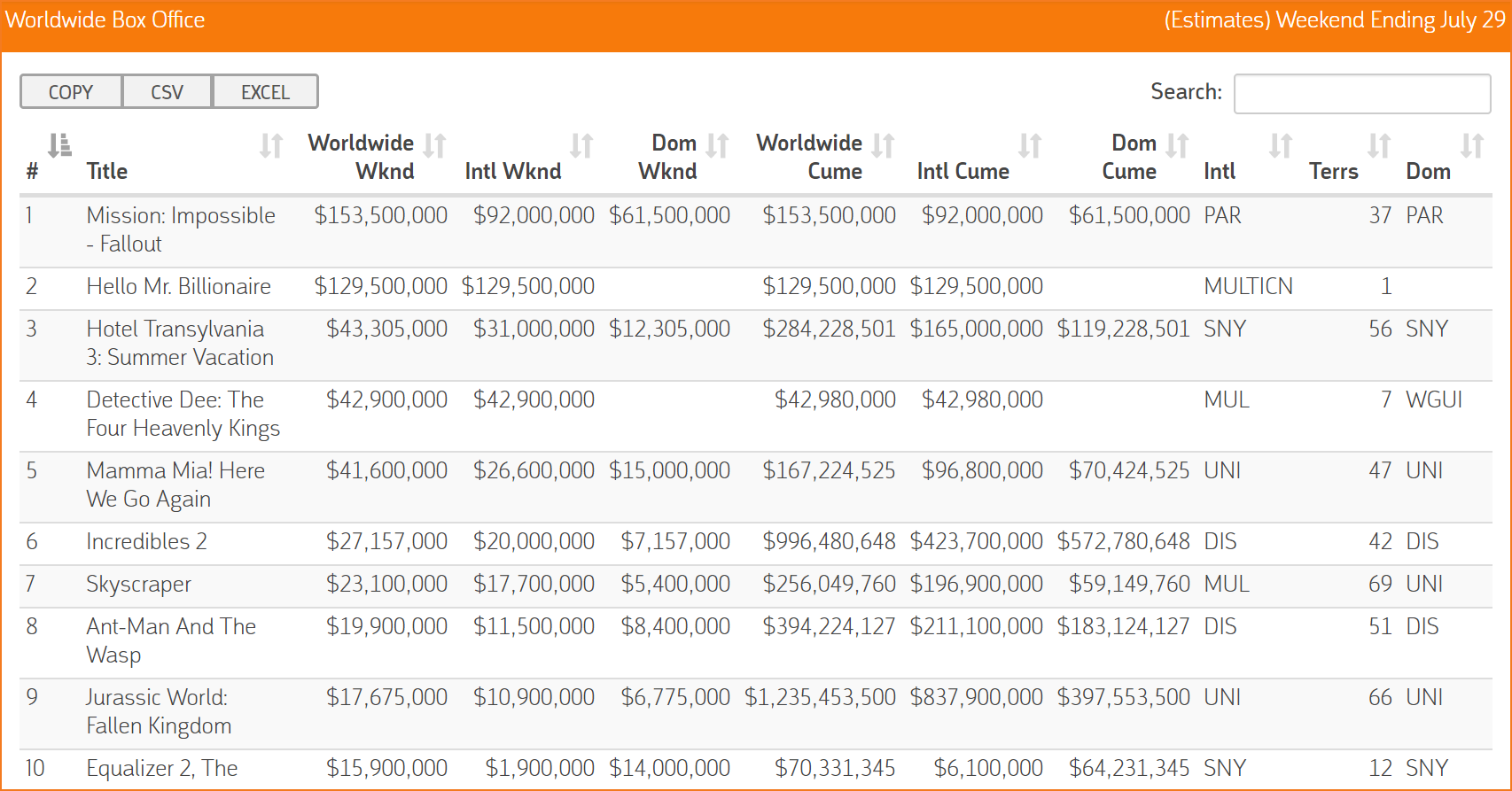 Looks like skyscraper is a bomb, man that looked terrible in the trailers

The Rock wants to have that Arnold draw to the movies but he just doesn't have it. You can't just put him in anything and have people come see it. He doesn't a Predator or Total Recall under his belt yet.
T

Gander said:
The Rock wants to have that Arnold draw to the movies but he just doesn't have it. You can't just put him in anything and have people come see it. He doesn't a Predator or Total Recall under his belt yet.
Click to expand...

He doesn't want to do any "dark" movies, and that will keep him from being the next Arnold.

As someone who thinks the show TTG is mediocre (but not the worst thing ever, and it's CN's fault the show is overexposed, not the people who make the show themselves), I'll say I had a really great time last night seeing it. I caught a 10 PM showing and actually there was only one family, the rest were people in their 20's-30's. I only point this out because everyone was laughing throughout the film so at least in my case the movie succeeded in appealing to everyone, not just little kids.

There is a lot to love in the movie, especially if you're a knowledgeable fan of the universe of DC Comics and their many animated series and movies. There were so many background jokes in this film it boggled the mind (like I'm sure there were a good deal I missed) and they make jokes out of fairly obscure elements of the DC verse. The animation is of course the style of the show but kicked up higher, but there's a few dream/fantasy sequences where they switch up the animation style completely and it's really cool. You do have to tolerate some of the TT's obnoxious behavior that was present in the show, but it was only like 5-10% of the movie tops and the plot of the movie is about the Titans realizing they have to start becoming real heroes if they want the public to appreciate them.

Also, WOW, without spoiling anything, I couldn't believe what the final line of the movie is. It's the sort of joke that you can get away with in a kids' film during it because the movie continues and kids won't still be thinking about it by the time the movie ends, but ending the film on such a joke was great. Also, there's one REALLY DARK joke about halfway through the film that was hilarious.

I'm not saying everyone who dislikes the show will think the movie is better, but I do think people who go in with an open mind and not let their dislike of the series cloud their mind may find themselves a fun time, especially if you're a big fan of the DC verse. I know both Nostalgia Critic and Cinema Snob (who had never seen the show) both enjoyed the movie, and neither are the sort to enjoy dumb humor that doesn't try very hard like the TTG series usually resorted to so I'm not alone here.

Also, you know, there MIGHT be something just a TAD interesting during the credits. Don't know what it could possibly be. Hey, you know what, don't worry about it. Forget I said anything, it's probably not anything that cool.....

TheChewyWaffles said:
He doesn't want to do any "dark" movies, and that will keep him from being the next Arnold.
Click to expand...

What is funny is his one solid non throw away movie is Faster which is a dark movie. This is The Rock at his best.