This thread is for the best of the best in Video Game GIFs. **Also WebM's

For viewing WebM's in chrome, use this extension

For Firefox, use this add on

They should be great quality, with great colors and smooth frame rates.

File size: Remember, smaller the better. Try to keep it at 15 or under. I'm not saying above that isn't allowed, but have a good reason for it.

Resolution: Aim for under 720p. For most GIFs, 640x480 is more than enough.
A 1080p gif is going to be prohibitively large, try to cut the size to at least 50%. And hey, you'll clear out some aliasing with the downsampling as well!


Programs for creating GIFs from footage

Information on how to best record footage for making into GIFs.

How to best create GIFs of older 8 and 16bit games.

When creating GIFs, my typical work flow is

If anyone feels something should be added to the rules, let me know and it'll be considered.

Also, if you submitted something in last years thread that you think is worth of being in the OP, send it my way and if it's up to snuff against everything else I'll toss it in.
A

Quick image tutorial for making a GIF in Photoshop. 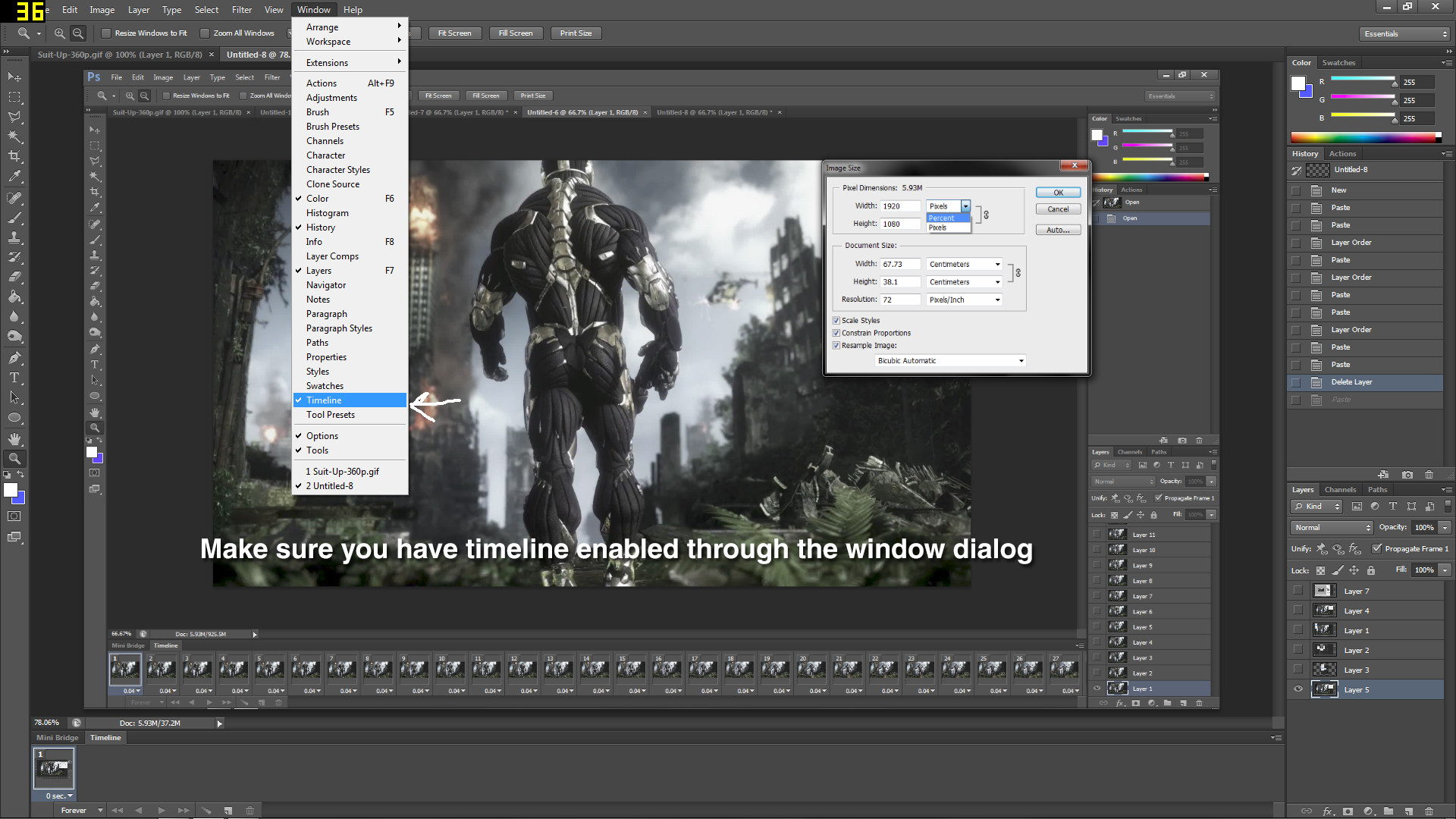 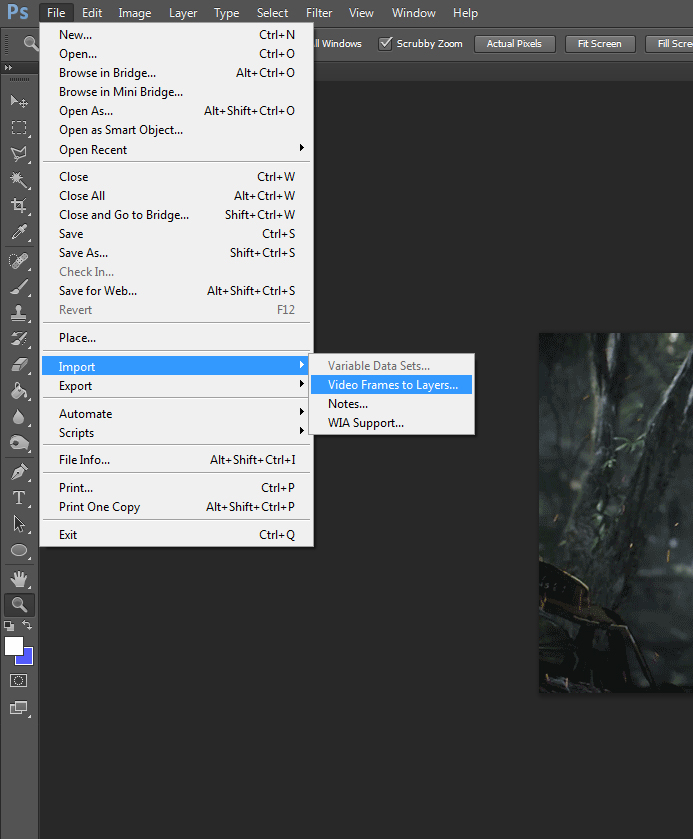 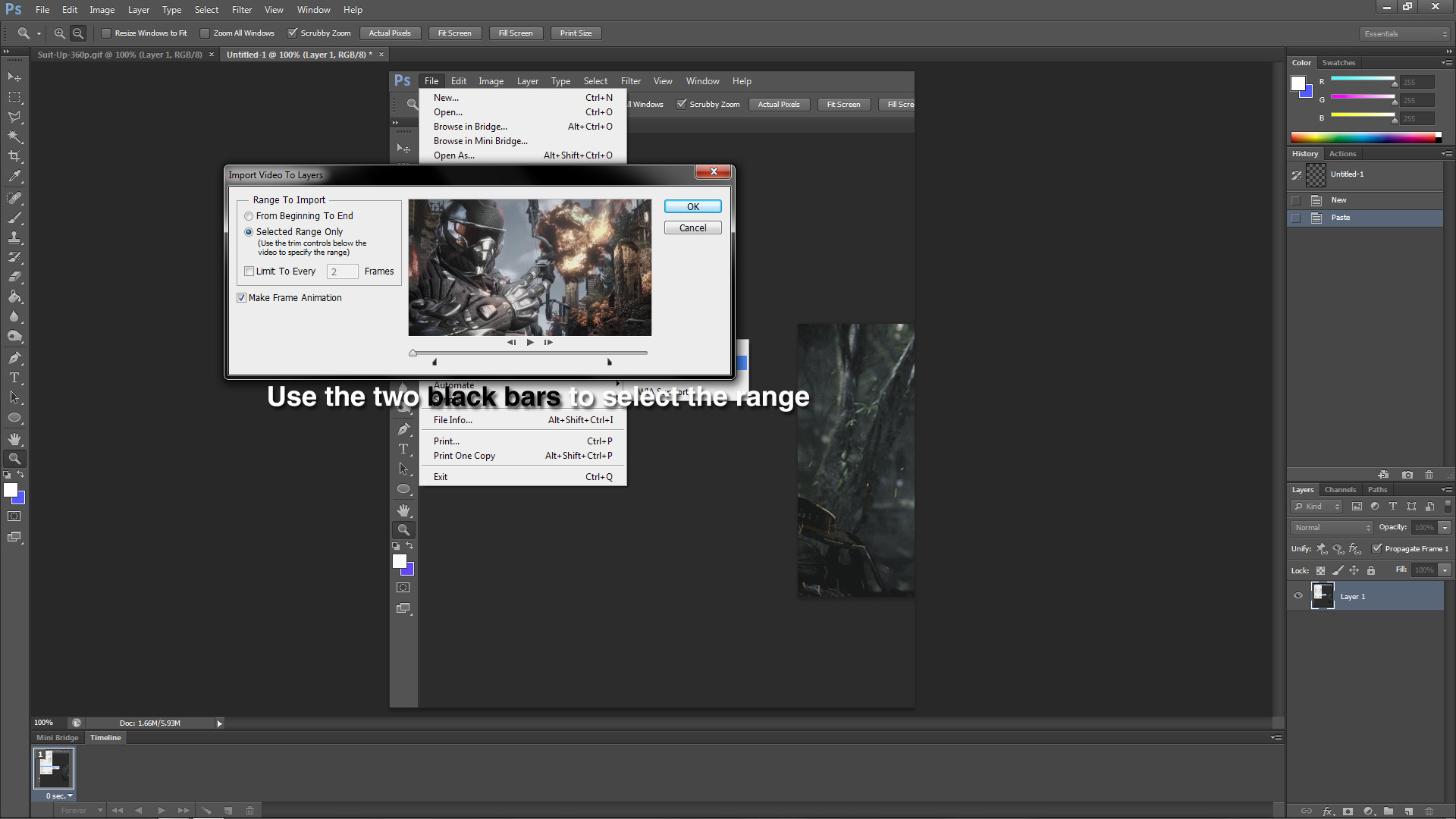 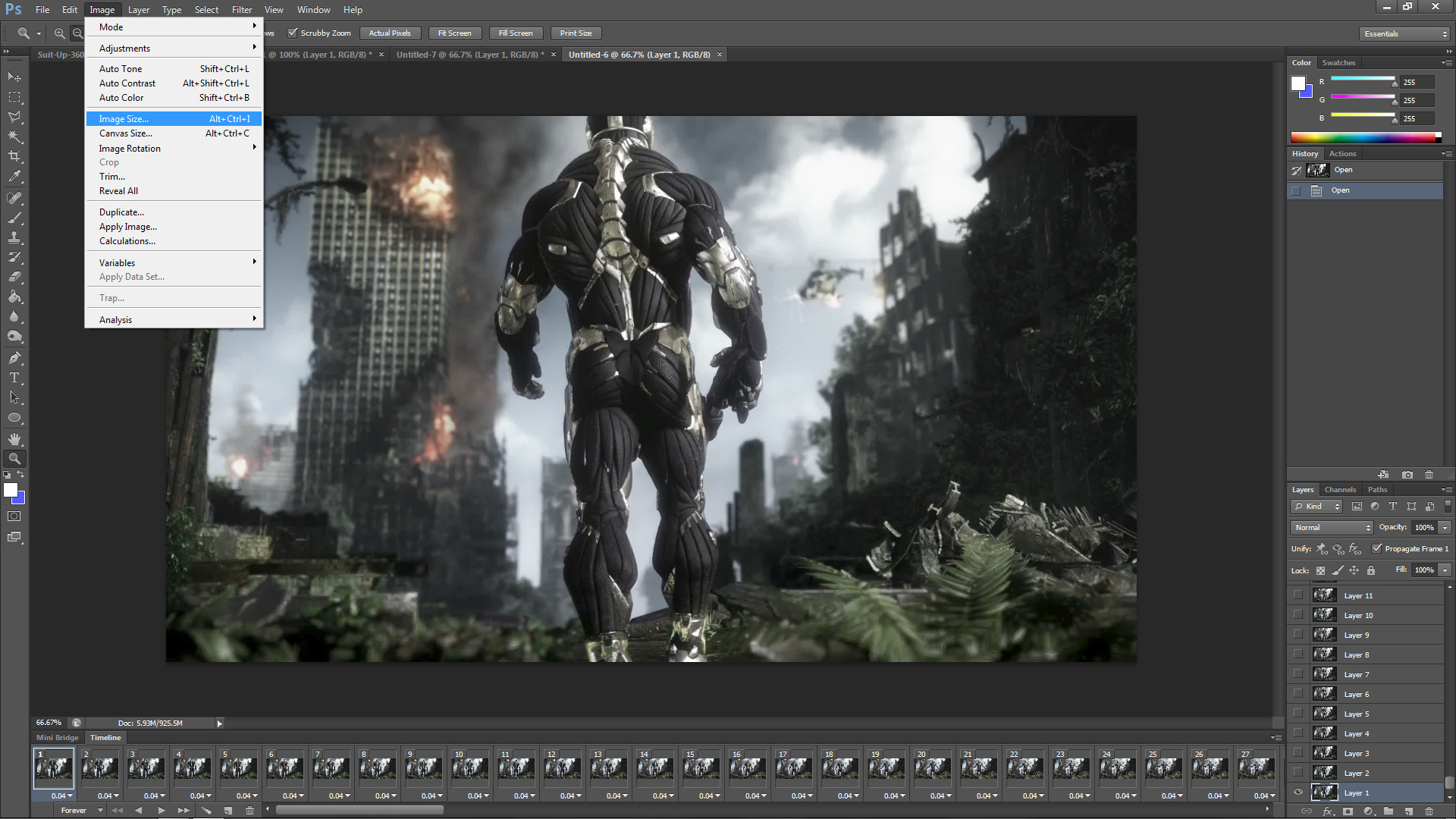 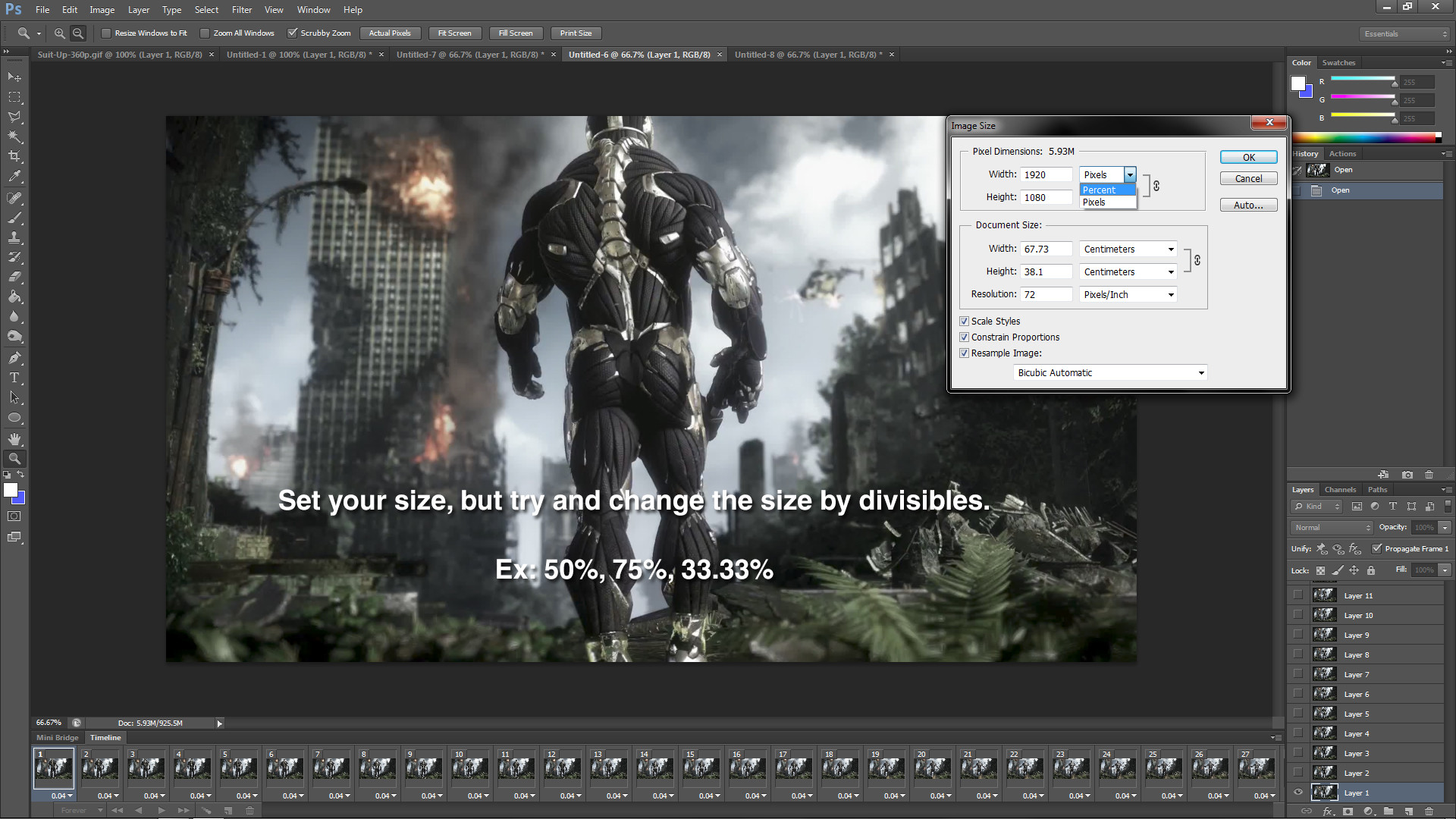 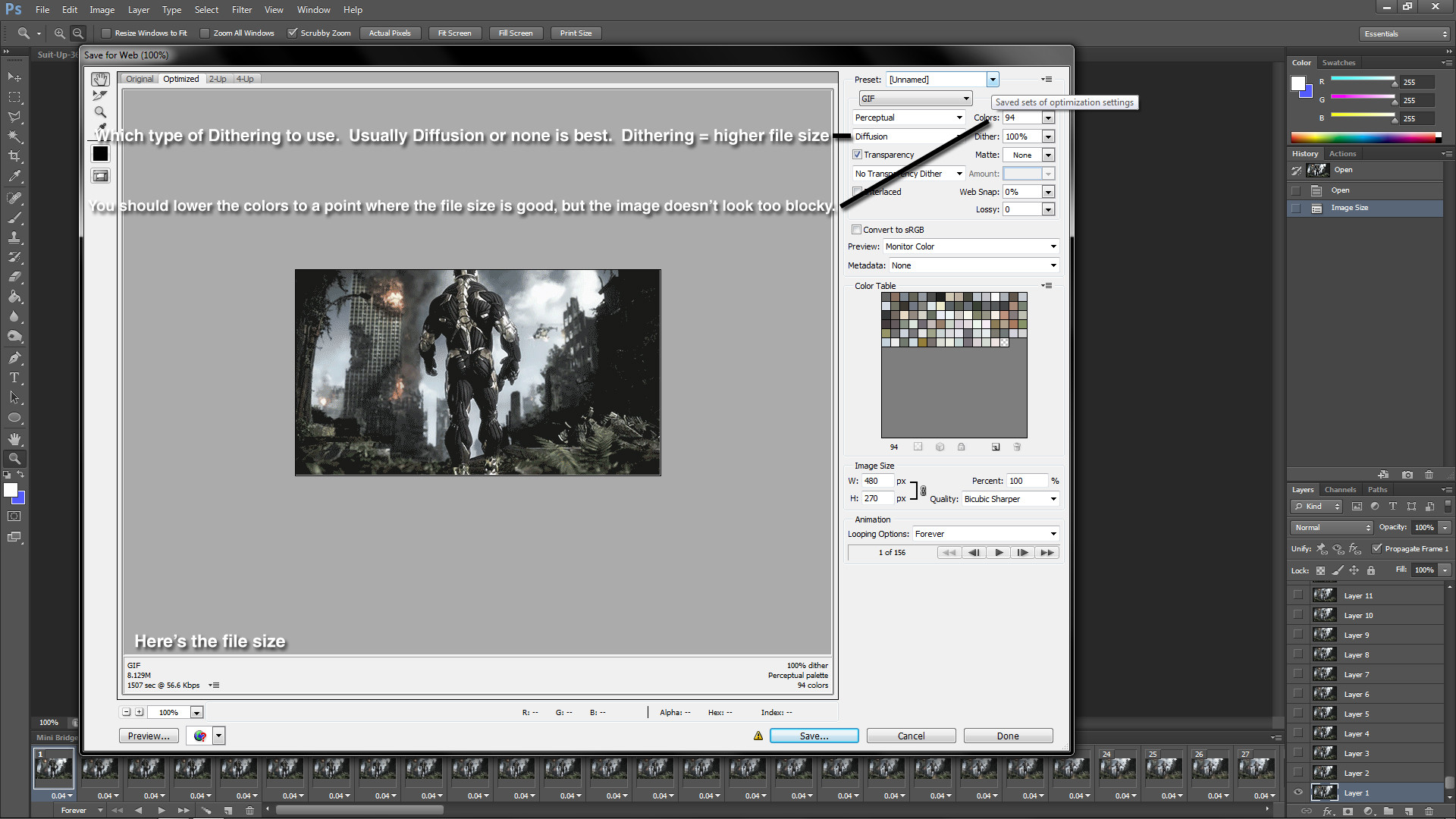 Photoshop is fabulous for gif making. It's part of how I justify my subscription to CC.
O

Gifs from the gods.
H

That GIF of Xenoblade makes me want to play it lol.
T

ugh at my color rates though, dunno how to fix it yet

Halo 4? Seems odd to group with those games. Either way, I'm pumped as well.
D

I can't wait to see what happens with this thread in 2 days.
A

Nabs said:
I can't wait to see what happens with this thread in 2 days.
Click to expand...

Feel free to check out the 2013 thread (linked at the bottom of the OP.)

I'd start at the end and go backwards because people really started to come into their own and learn how to make GIFs really well.

killermmn said:
man will this 50 fps gif will be norm for e3 gif thread??
Click to expand...

60 fps footage being readily available at E3 is still an issue so I doubt it.
A

RE4 handles the UI in an...interesting way.

Alo81 said:
RE4 handles the UI in an...interesting way.

I was going to quote that one too. It looks incredible.
D

Alo81 should make one as awesome as that for Monolith Soft's "X" too. ;D

There ain't no better feeling then this!

Damn, this gif makes me want a FEAR remake. I loved its MP, to frag someone by sliding in. Was priceless.
R

Sega1991 posted this in the Sonic thread a few days ago. It belongs here:

That Snow gif. Makes me want to buy it lol.
C

Those FEAR gifs loaded in such a way that the grenade throws and following explosions were perfectly in sync with one another.

It was great!
C

Upload your gifs to gfycat.com, those HTML5 thingies load way faster.
B

...how are you making the gifs look that smooth?
O

God..yup... now I want to play Xenoblade again. I cannot wait for X.

Yup... still love the original FEAR. What a fun game. Such a shame what FEAR 3 became, even if it was a sort of fun co-op game.

Good idea for a thread! Even though it's going to murder my browser, I'm totally subscribing.
O

I hope posting my own stuff isn't considered cheating...
H

BBboy20 said:
...how are you making the gifs look that smooth?
Click to expand...

Capture the footage at 60 fps
Z

My favorite was just firing at a wall and seeing chunks explode apart.
A

Grinchy said:
I was going to quote that one too. It looks incredible.
Click to expand...

A cool detail worth noting, when the car crashes the visor gets a small crack in the bottom right from the impact.

Wow, I really should play FEAR. That looks awesome.

Don't upload your GIFs to Gfycat - that's not for this thread.

Gfycat compresses the GIFs and reduces their quality. That's not what this thread is about.

Also, the idea of converting a video to a GIF to a video is sort of ridiculous - especially when quality is concerned.

I hope posting my own stuff isn't considered cheating...
Click to expand...

Absolutely appreciated and acceptable. Your game looks great by the way!

What game is this?

Oh and I'm subscribing to this thread. The dawn of a new generation will bring a plethora of amazing GIFs.
A

AstroNut325 said:
What game is this?

Oh and I'm subscribing to this thread. The dawn of a new generation will bring a plethora of amazing GIFs.
Click to expand...

I believe it is FEAR.
C

What's the ideal frame delay for 50fps GIFs in Photoshop?
A

Someone has to make an easy 4k/60fps .gif host/uploader for GAMING
Opinion Business

Musky_Cheese replied
Feb 4, 2021
An Introduction To Japanese Adventure Games pt.1 - What They Are and The Different Types
Analysis