Opinion Analysis A while back i tried to make sense of the complicated release history of the math blaster series of educational games. These are my findings.

I believe a majority of people over a certain age played at least one of Davidson & Associates Math Blaster games growing up. May it be at your school, at a friend or even if you actually owned the games yourself.

I was one of those kids and a while back i felt like experiencing some nostalgia and tried to track down what game in the series i played back then, and it was then i learned that it wasn't as easy as i first thought. To say that the series has a "messed up" release history is an understatement and after doing a lot of research i decided to share my findings in case anyone would be interested in reading about them.

Now, lets start. (Note that this will only cover the mainstream PC Math Blaster series up until the year 2000, as beyond that had no interest in it. I am also not covering its various spin offs such as Reading Blaster and Alge blaster, with one notable exception as detailed below)

The original Math Blaster was released in 1983 for the Apple ii, DOS and a bunch of other systems. It was a simple mini game collection where you ran around completing math themed challenges as an featureless man. 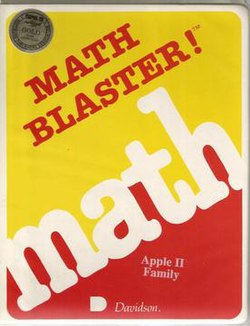 The game was given an update in 1987 and released as Math blaster plus!. This version featured a new set of challenges and the featureless man of the original became green alien known as the Blasternaut. It was otherwise mostly the same game though (Sadly couldn't find any better video of it) Yet another update came in 1990 as the game was released as New Math Blaster Plus!. This version featured a brand new set of mini games, much better graphics and an overall better presentation. It didn't have much in the way of an narrative though, which would soon be fixed. Math blaster was releasad yet again in 1993 as Math Blaster Episode I: In Search of Spot. And unlike the earlier games this one also gave you motivation for completing the challenges it presented in the form of an plot. The Blasternauts robotic buddy Spot has been kidnapped by a trash alien and has to go and save him in a series a math themed challenges. It also introduced a third character known as the "Galactic Commander" (GG) and her and Spot would go on to become regular characters in the series alongside the Blasternaut. 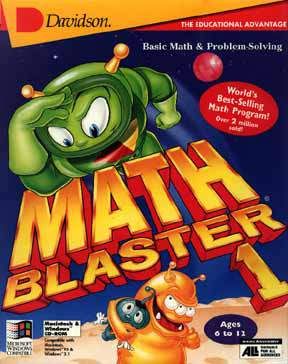 The existence of an Episode 1 would of course imply that an episode 2 was also being worked on. This game would arrive in 1994 and be known as
Math Blaster Episode II: Secret of the Lost City. In this game, the trio are searching for the titular lost city only to have their ship shot down by the evil Dr. Minus, and has to unlock the secrets of the city in yet another series of math themed challenges in order to stop him for good. Designed for slightly older kids than the previous games. It was also the first and only game to have the characters as CG. 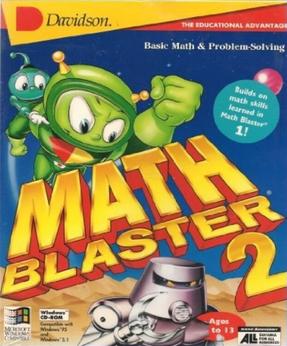 In 1996, another new game in the series would arrive in the form of Math Blaster Jr. As suggested by its name, this was made for pre-schoolers and didn't really have a plot. Being more of a math themed activity center featuring younger versions of the main characters.

The same year as Jr was released the main math blaster game was updated yet again and released as Mega Math Blaster. While the basic plot was the same (The Blasternaut having to save Spot from some alien, this time a slime monster) the graphics where updated, new mini games were added and a lot 90s "attitude" was present. 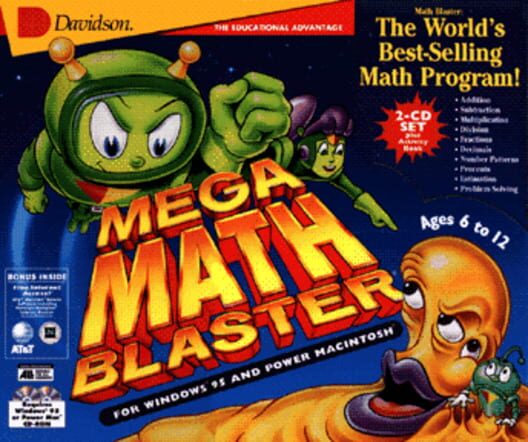 In 1997; Davidson & Associates decided to "unify" their edutainment lineup by having them target a very specific age group. The first of these to affect math blaster was released the same year as Math Blaster: Ages 9–12. A "reimagining" of episode 2, like Mega it told the same basic story as its predecessor by having the blasters ship crash on an unknown planet and having to use their wits in order to escape in yet more math themed challenges. Being relatively recent games, Jr and Mega was also repackaged the following year as Math Blaster: Ages 4–6 and Math Blaster: Ages 6–9 respectively. 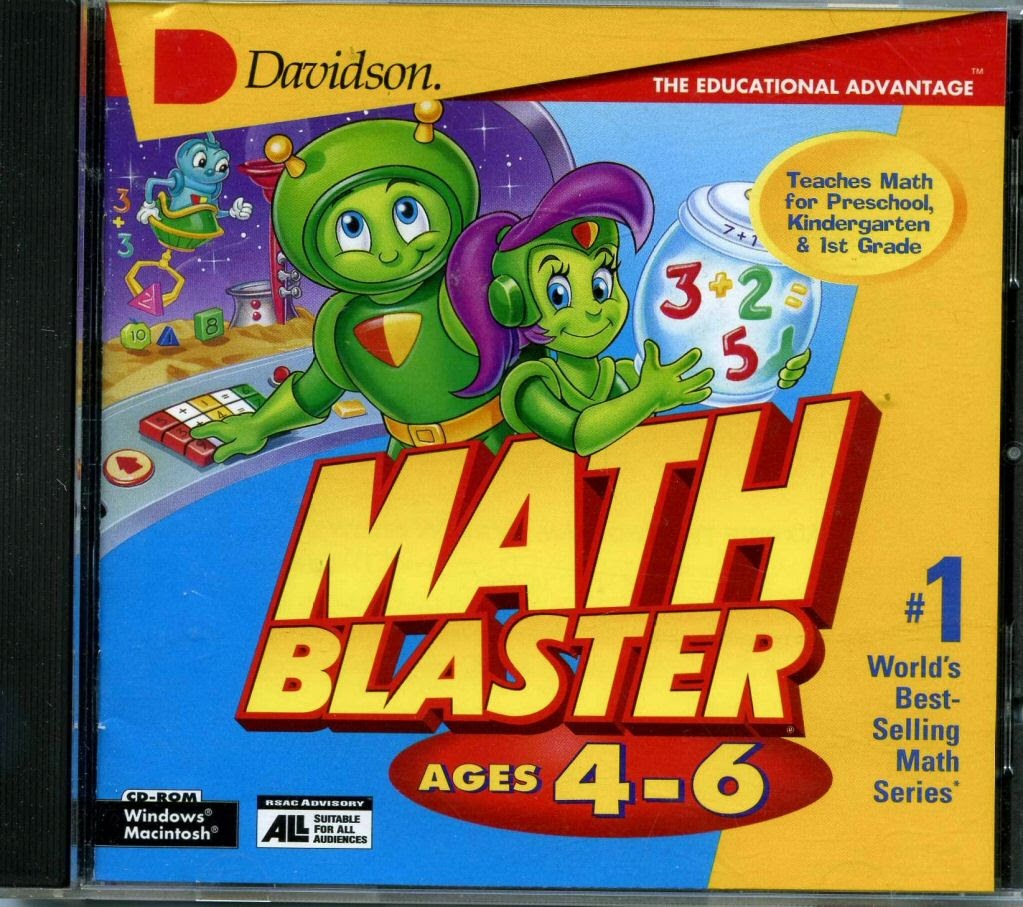 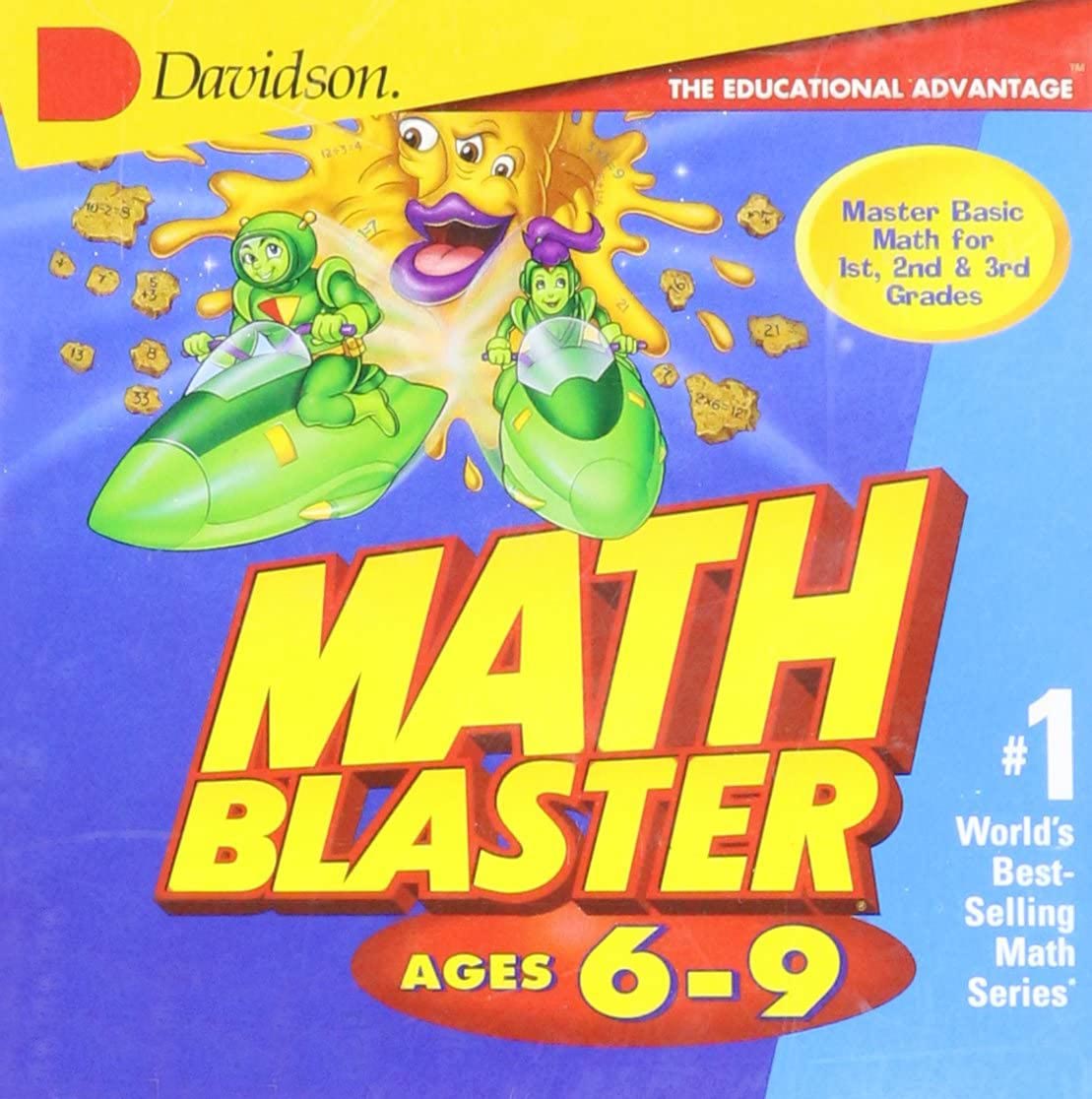 In 1996, Davidson & Associates had been bought by CUC Software and while business continued as usual for the following two years or so, things where soon to change. Around the same time CUC had also bought Davidson rivals in Knowledge Adventure (Most famous for the Jumpstart series) and the former where soon folded into the later and from that point on, all Math Blaster games was released under the Knowledge Adventure label. The "age group" label had meanwhile been proving to be controversial and KA decided to instead market the games towards a specific school grade. But alongside these 1999 games something else happened. A Nelvana produced animated tv show known as "Blaster's Universe" had its premier on CBS and despite having nothing to do with the Blasternaut and his story (instead featuring a kid known as "Max Blaster" as its lead character), KA decided to make the next group of games a tie-in to it. 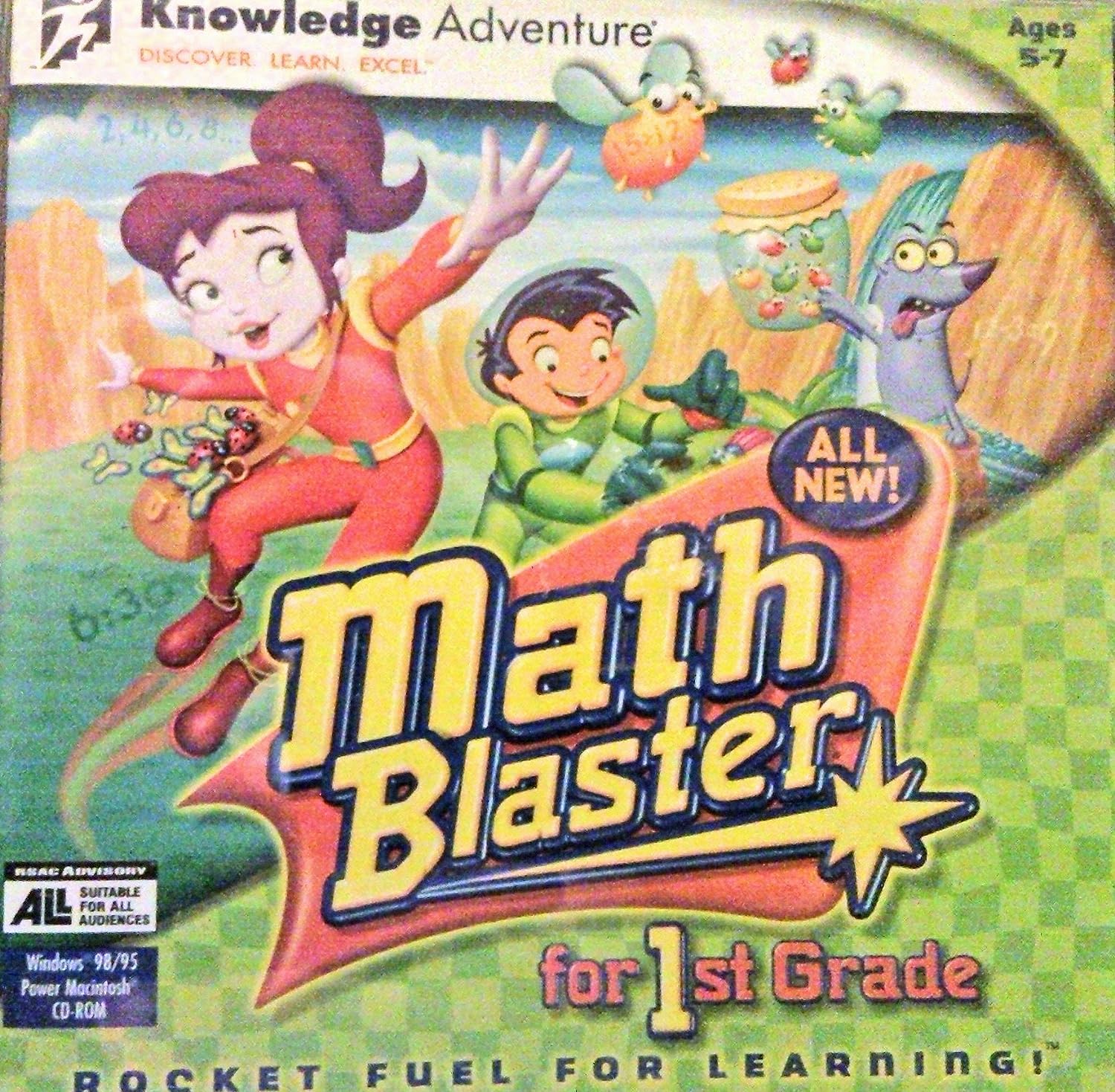 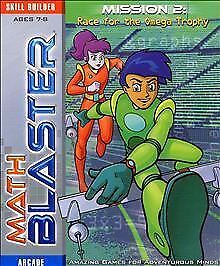 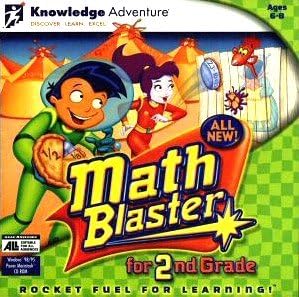 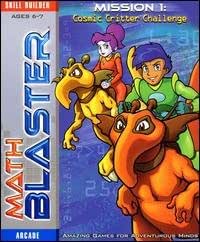 Its when it comes to the release of the games meant for 3rd, 4th and 5th grade though that things got weird. Rather than make brand new games, KA decided to repackage 4–6 and 6–9 as Math Blaster for 3rd Grade and Math Blaster for 4th Grade but here comes the twist. They still decided to have the box art proudly display Max Blaster and co, despite the games not featuring them whatsoever! 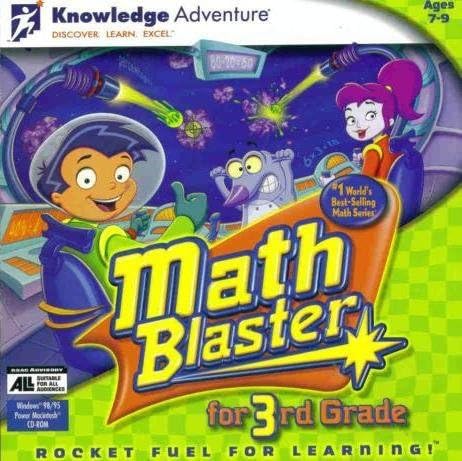 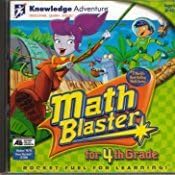 But even more confusing is what they chose to do with the 5th grade game. But first let me go in on a tangent here and talk about Math Blaster Mystery. A spinoff from the series originally released in 1989 (cant find any video so a stil image will have to do) that took on a more P&C adventure game approach to edutainment and was horror themed rather than space themed. 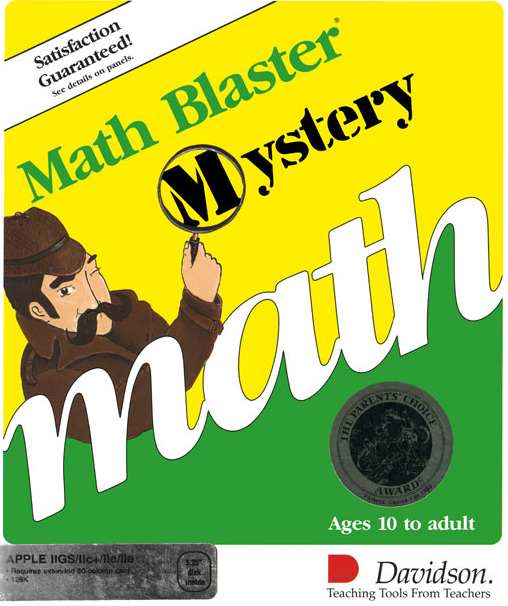 This game would receive an in-name-only sequel in 1994 known as Math Blaster Mystery: The Great Brain Robbery (also known as Math Blaster Mystery: Pre-Algebra) where you aided a different green alien known as Rave in stopping a mad scientist known as Dr. Dabble from taking over the world. Like the original, it played more like a math themed P&C adventure game than anything and was also horror themed, though to an even greater extent than it predecessor. 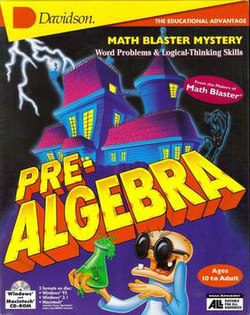 around the same time (1997-98) as mega and 9–12 released, this too received a sequel confusingly called Math Blaster: Pre-Algebra. Like said games it to featured the same basic plot as the original (Rave having to save the world from Dr. Dabble) but this time in a series of linear challenges akin to the mainline Blaster series. And if you haven't figured it out by now, this is the version KA later released as Math Blaster for 5th Grade in 1999, despite having nothing to do with the other games. Though this time they went out of their way to not feature Max Blaster on the cover and they even brought back Rave when it was rebranded back to its original name in 2000. 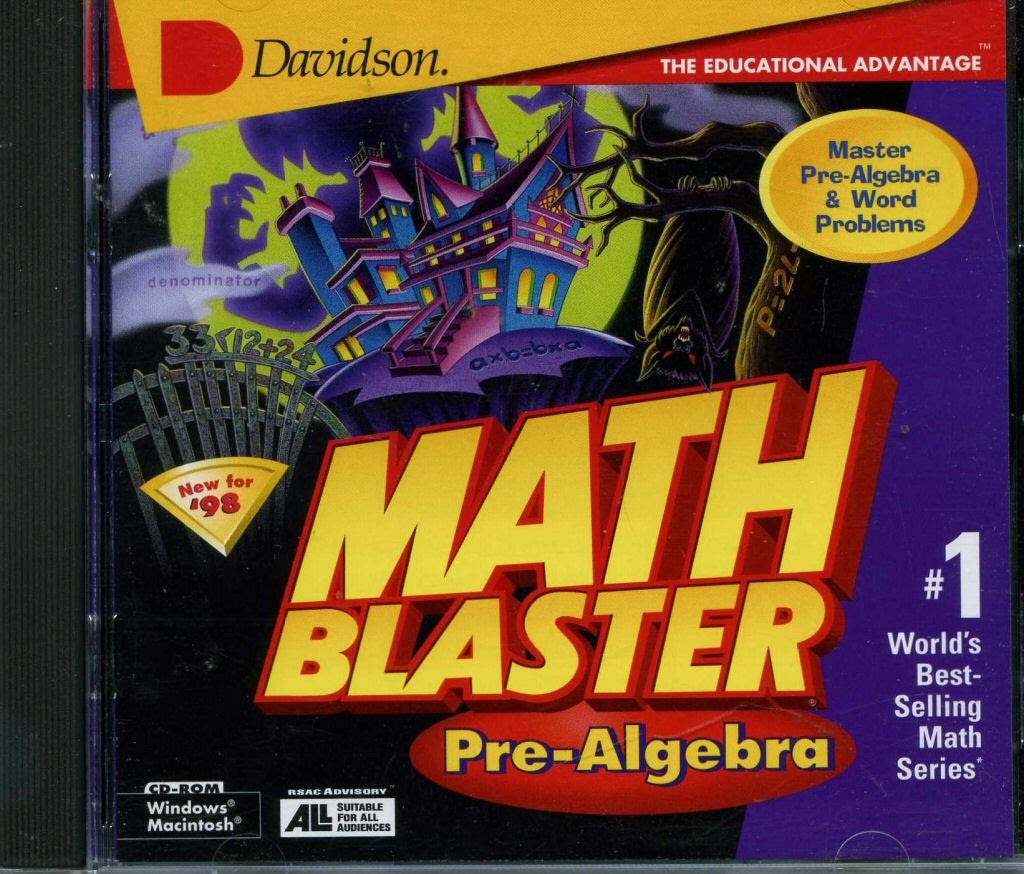 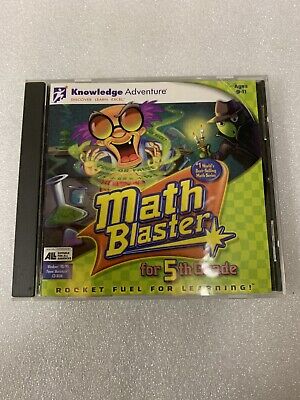 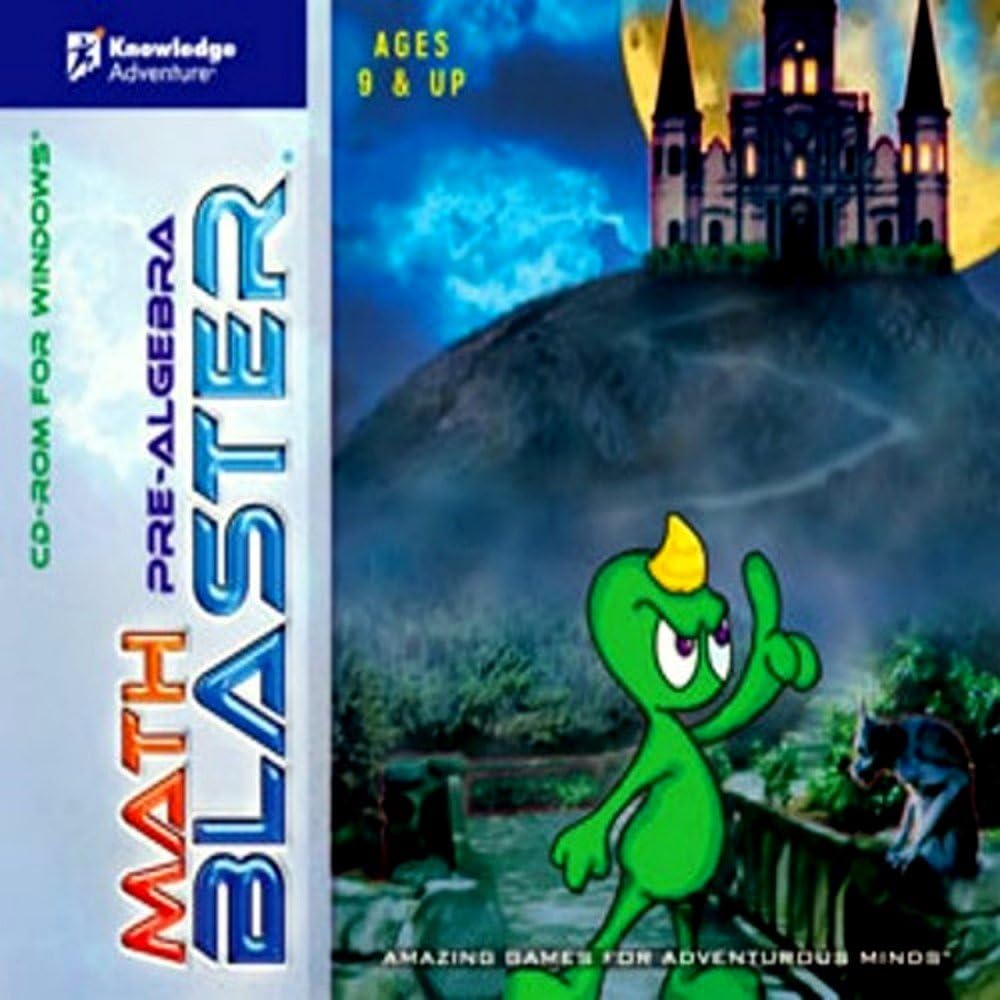 Now back for the potential 4th Max blaster game i mentioned earlier. All of my research suggest that this game was released alongside the other "age group" games in 1998, which its name of Math Blasters: Ages 8-9 would support. But that seems strange considering that it was a full year before the cartoon premiered and my research also claimed Max blaster didn't exist prior to it. It was hard to find much info on it in general, and its possible that this game might actually be where Max Blaster originated before making the jump to TV, but i could never find anything to support this theory either so for now it remains an oddball in the series. 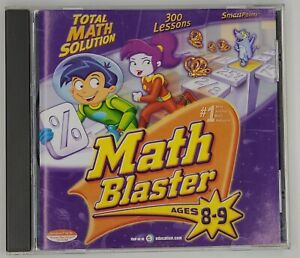 And with that i considered my research finished (the ones i played was Jr, Mega, Episode 2 and pre algebra if your curious). To think such a on the surface simple series of edutainment games could have such a complex history.

Considering doing the same with the Jumpstart series some day that i also played during my childhood, but from what ive heard, that one is even more complicated, so maybe some other time.

I appreciate the effort.
Reactions: Solarstrike and Kuranghi

Wow thats a nostalgia hit. Maybe it was some UK clone but I remember something like this, where you had to solve math puzzles before a "laser wall" reached a certain point. Might just be my addled brain combining things though.

I've probably seen at least one or two of these while browsing for software at the time but never played any of them. Still a very nostalgic post made with effort and it shows, thanks for your time!

Kadve said:
Like the original, it played more like a math themed POC game than anything and was also horror themed, though to an even greater extent than it predecessor.
Click to expand...

I'm assuming you meant point and click (no idea what abbreviation it uses) instead of POC?

Hawks Eclipse said:
I'm assuming you meant point and click (no idea what abbreviation it uses) instead of POC?
Click to expand...

Yes. No idea why i got POC from. For some reason i have pretty much always refereed to them as such...
Reactions: Hawks Eclipse
You must log in or register to reply here.

Aug 12, 2021 started kingfey
Sep 9, 2021
Needlecrash
Game Dev A look back at the Ratchet & Clank series & Insomniac Games | Behind the scenes