the waifu age is still coming Anime Japan 2013 had plenty of booths at Tokyo Big Sight advertising the latest anime and hawking related swag, but some companies also took the opportunity to showcase new technology that might be of interest to fans of animation.

Sony's new HMD (head-mounted device) takes those who wear it into the world of anime. It tracks your head movements so it feels as if you're actually inside a cartoon. Turn to your left, and the video you're watching will swing that way too. The example at Sony's booth was for the idol anime The IDOLM@STER and came loaded with two videos. One showed a concert, with the wearer in the perspective of an audience member. The other (seen below) is set in the offices of the talent agency from the anime and lets you watch the cast behind the scenes.
Click to expand...

This changes everything people. EVERYTHING!
F

those girls look younger than the ps4
L

Ok, they got Japan locked down.
V

Freeman said:
Ok, they got Japan locked down.
Click to expand...

I'd buy a PS4 if I could hang out with those Idols.

Is there a video of this?
C

And you thought Japan's birthrate was bad before
G

They're about to sell a million in Japan alone in 24hrs.
Y 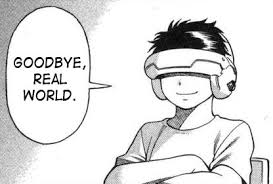 Persona 5 will be "more approachable"...
C

That's not Project Morpheus, right? It's the HMZ-T3W prototype with head tracking, the one they showed at CES.

I am genuinely fearful for the future.
B

That would be neat being able to walk around during some DBZ or HxH fights.
A

Anime, anime everywhere. No thanks.
A

How much is Sony stock going for right now? I'll take a million shares please.
F

If we need waifus to sell to actually get things like Sword Art: Online, then fine with me.
L

I imagine Nintendo isn't the person people want to fuck with this technology.
O

LumpOfCole said:
"I know not with what gameplay elements Persona 5 will be played, but Persona 6 will be played with VR and fleshlight."
-- Albert Einstein
Click to expand...

The other (seen below) is set in the offices of the talent agency from the anime and lets you watch the cast behind the scenes.
Click to expand...

Did you get a good view of the casting couch?
F


LumpOfCole said:
"I know not with what gameplay elements Persona 5 will be played, but Persona 6 will be played with VR and Novint Falcon with Tenga."
-- Albert Einstein
Click to expand...

There's hope yet! Thank you, Japan. Deliver us from the waifu-free tyranny of Facebook!

freenudemacusers said:
those girls look younger than the ps4
Click to expand...

This, exactly. Waifus are much cheaper than actual wives.
K

Sad? This is the pinnacle of human achievement.
D

Call me when there's a Golden Boy game

Hoo-doo said:
Sad? This is the pinnacle of human achievement.
Click to expand...

Ahahah... you're being sarcastic right?!


VR looks cool but this? This creeps me the fuck out.
You must log in or register to reply here.

Thoughts on the murmurs that Sony is winding down SCEJ and Japan side of things?
Opinion Rumor 2 3

SlimeGooGoo replied
Nov 14, 2020
VICE: It's only a matter of time before Sony kills access to PS3 and Vita games entirely.
2 3