Shawn Elliott retweeted this, looks pretty rad. Got that id look, but much more an interesting game than RAGE. Thought it deserved a thread, with all that gameplay. The video is pretty great, watch it.

Ashen Rift: A man and his dog. 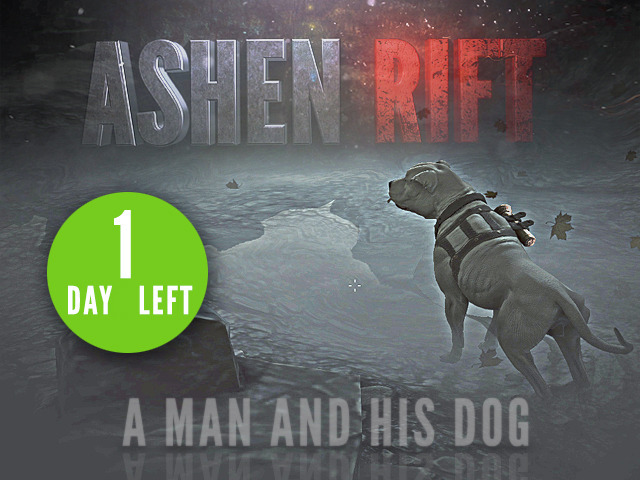 "Hello! My name is Barry Michael Collins and I am a games industry freelance artist with 14 years experience. Recently I started this project by dedicating 2.5 months of my time to work on it. I embarked on this project with the intent of being able to walk away from my life of freelancing while moving towards the goal of producing a game in the artistic and narrative style which appeals to me rather than the highest bidder."
Click to expand...

Fable, Dead To Rights Retribution, Fallout, I'm all for more dog partners in games. Here, you can give 4 commands in a D-pad type menu.

The back bone of the game is the idea that the players are in the shoes of a man with his dog in a world full of creatures which seek to devour them both. This leaves the player with 4 major elements to interact with:
1) The world.

3) The objects within the world.

4) The Enemies and other non-player characters (NPCs).

For starters, I really want to shy away from the trigger-happy standards of a first person shooter. I want to make ammo and guns sparse, forcing the player to find new methods of surviving hostile encounters.

The strength of Ashen Rifts design does not come from blasting bad guys with bullets for hours on end. It comes from the player's ability to play the game the way their personality dictates. Some people may be averse to combat situations and thus spend the majority of the game avoiding conflict. Others may just feel that the only way to progress is to kill everything in sight, and that is for them to decide and then figure out how to act on those impulses.
Click to expand...

The game will follow their journey as they leave the crumbling rural area of what use to be the central United States of America. As they eventually find themselves staring across the now barely recognizable Rocky Mountains, the path will become increasingly ashen and barren as they are continually introduced to desecrated areas of Earth like they have never imagined possible.
Click to expand...

Remember, The demos I am showing here represents under 5 months of mostly part time work! Imagine what the results of 10 more months full time work could yield. Please help me take this project from the demo it is now to a solid game for Mac, PC and Linux.
Click to expand...

It is time to take Ashen Rift to the next stage! I would like to be able to raise enough funds to work on this game full time until December of 2014. This would allow me a bit of a budget to pay for a Unity3D licence, outsource some aspects of development (Music, SFX, Voice overs, Coding and Art help etc) with the end goal being Ashen Rift as a 3 to 5 hour game.
Click to expand...

Obviously, hit detection and recoil is a bit wonky but early days. Although, that shotgun is snazzy!
M

Kotaku did an interview

Keep in mind that I also have a distaste for overly ham-fisted story lines... I feel like if this was a AAA title by a major publisher, he would be a cartoon of the sort of real person he could be. I don't need him to have some massive heart breaking story like "feeders killed my mom, dad, wife and children and now I'm going to get REVENGE!!!" y'know, its not like that, everyone has a shitty story... He's a little more of a realist, like you'n me, right, He understands that the world is the way it is, came to terms with it and is now determined to at least try.
Click to expand...

Interesting that the game might not have a typical motivation for the protagonist. btw, was just reading the wiki for A Boy and His Dog since the subtitle references that, and that is one fucked up story (not surprising from Harlan Ellison).
M

Failure:
So, what happens if it fails to reach 45k?
Well, I'll go back into hiding, keep working on the game and return within 6 months with a new pitch, a refined Kickstarter (or indiegogo) campaign.
Sadly this will mean that the release date will be pushed back atleast 2 months, but Ashen Rift will be back, with a larger team and a refined campaign.

Spread the word, get your friends to pledge (I'll figure out a referral program if enough of people are interested) and lets make this happen!

Thanks for the support so far everybody, I am blown away by the amount of backers and support!

In the meantime, Enjoy this video video with much doge! Good ole Bounder! Your new best friend.
Click to expand...

this is back on. pledged again. here's hoping
K

This is a pretty awesome concept.
You must log in or register to reply here.