Bamco Producer - "Which Ace Combat/Ridge Racer remake do you want to see?" 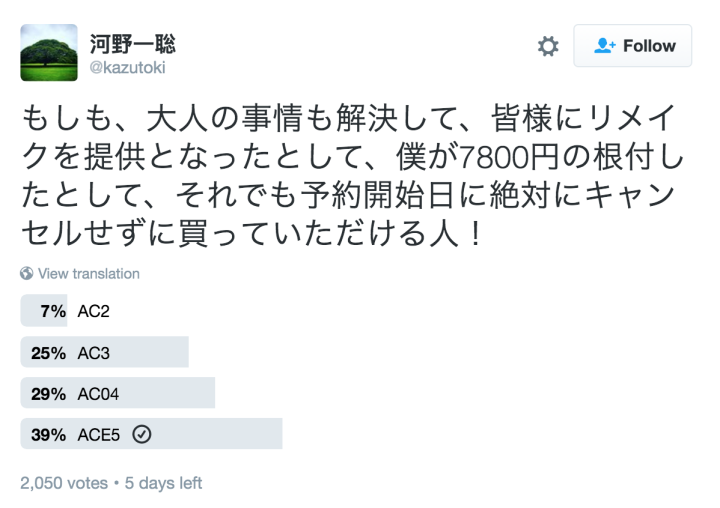 Looks like voting is already closed for RR.
K

I voted type 4, the only AC game I played was on 3DS. So I didn't bother voting in that poll.
R

Type 4 FTW. Was the soundtrack created entirely by Namco, so they shouldn't have any license problem?
R

If they manage to follow through and capture the sheer atmosphere of RR4 in a potential remake I'll be pretty stoked.

kenta said:
Which game won the Ridge Racer poll? The results don't appear on the mobile version of the page...
Click to expand...

Which game won the Ridge Racer poll? The results don't appear on the mobile version of the page...
J

AC6, offer a collector's edition including an ACE Flightstick and I'll be there day one
F

kenta said:
Which game won the Ridge Racer poll? The results don't appear on the mobile version of the page...
Click to expand...

I'd like to see something like Ridge Racers 3 really, a best of that also has modern mechanics and a slick interface.

Ever since Ridge Racer 7 they've been muddying the purity with car upgrades and slipstreaming (though Ridge Racer 3D struck a fine balance) so maybe it's for the better that they revisit the old catalogue of games.
@

If they go through with the AC remake, will they remember to tell people it's a remake this time around?
H

Heh, seems like every Japanese publisher has a remake planned. Can't they just make a new RR, call it Type 9?
J

Limality said:
Yes!!!! Type 4 was and still is quite epic
Click to expand...

I still perfectly remember the intro from that game even if I played it a handful of time. Great game with an amazing style.
A

Rymuth said:
Now I better flee before Ace Combat Zero fans realize their game is not in the poll. :3
Click to expand...

He tweeted later saying that he's a noob and posted late at night, so he forgot lol.
I

This is the best answer in my opinion. PS2 era Ace Combat games were definitely some of the finest moments in gaming for me.
J

I was going to vote RRT4. Glad the internet did it for me.

Now please, do it for Ace Combat 2
B

Oh shit! 5 was the Unsung War right? I got confused and voted for 4 instead. Although I liked 4's storyline as well.

Ace Combat 5 for sure.
A 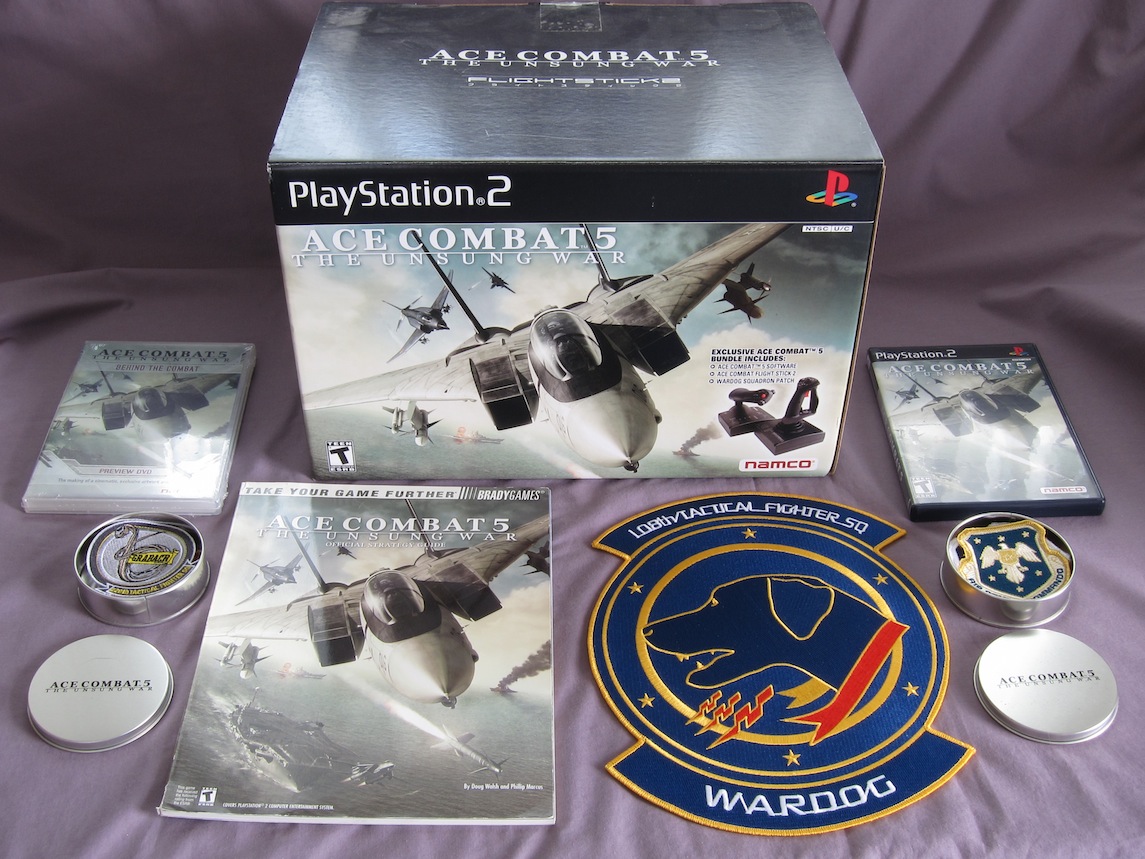 Rave Racer is the Ridge Racer game I want a remake of the most. 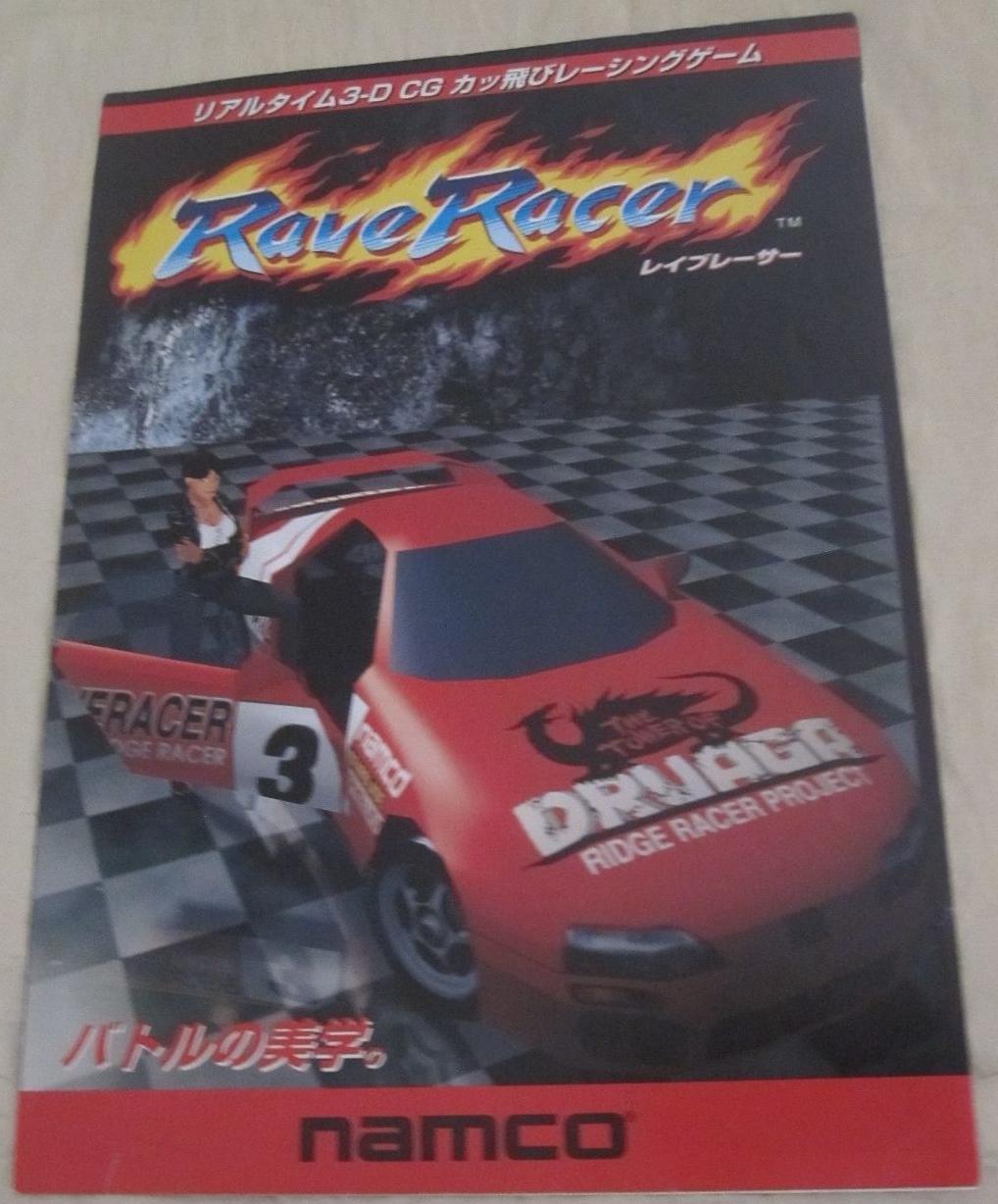 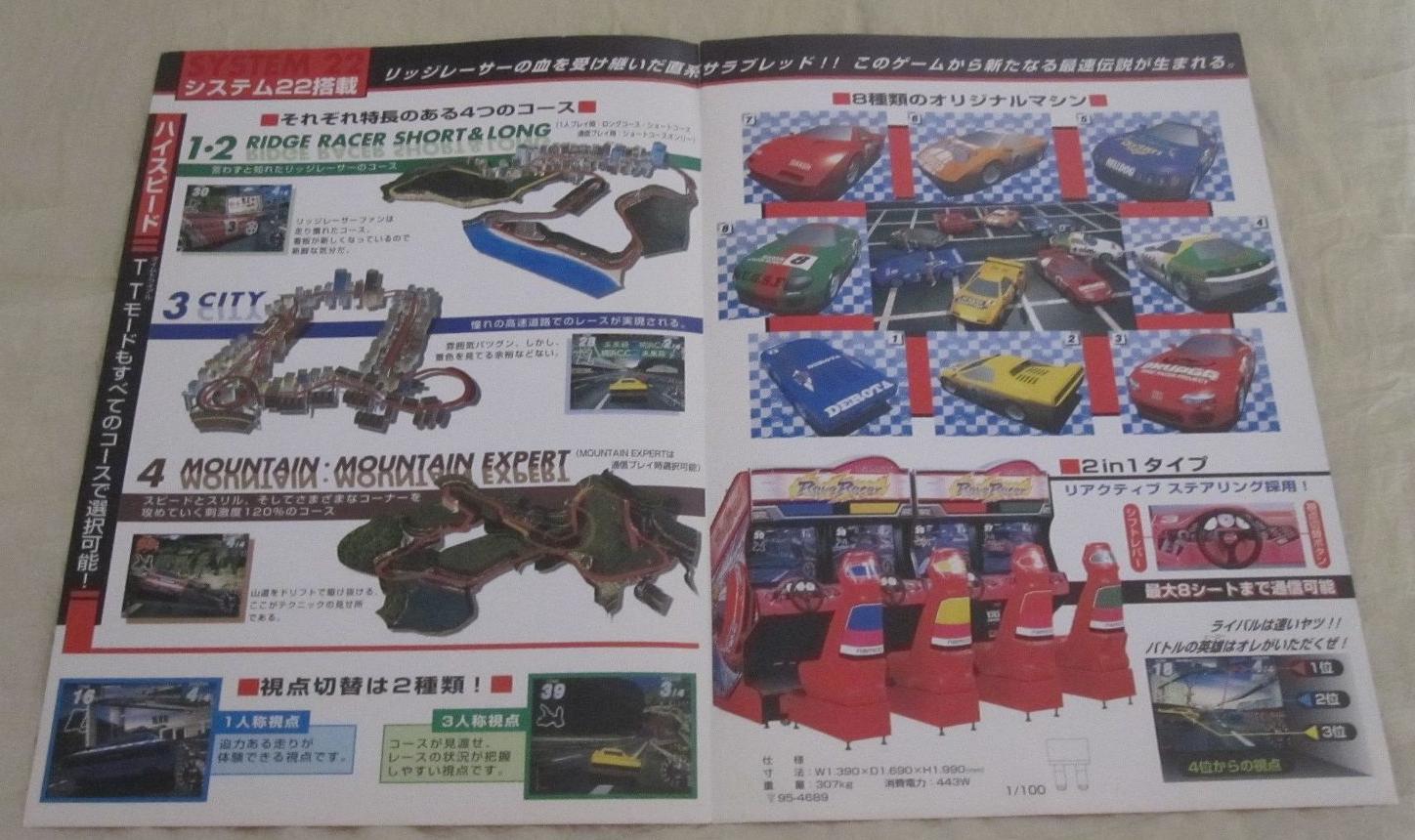 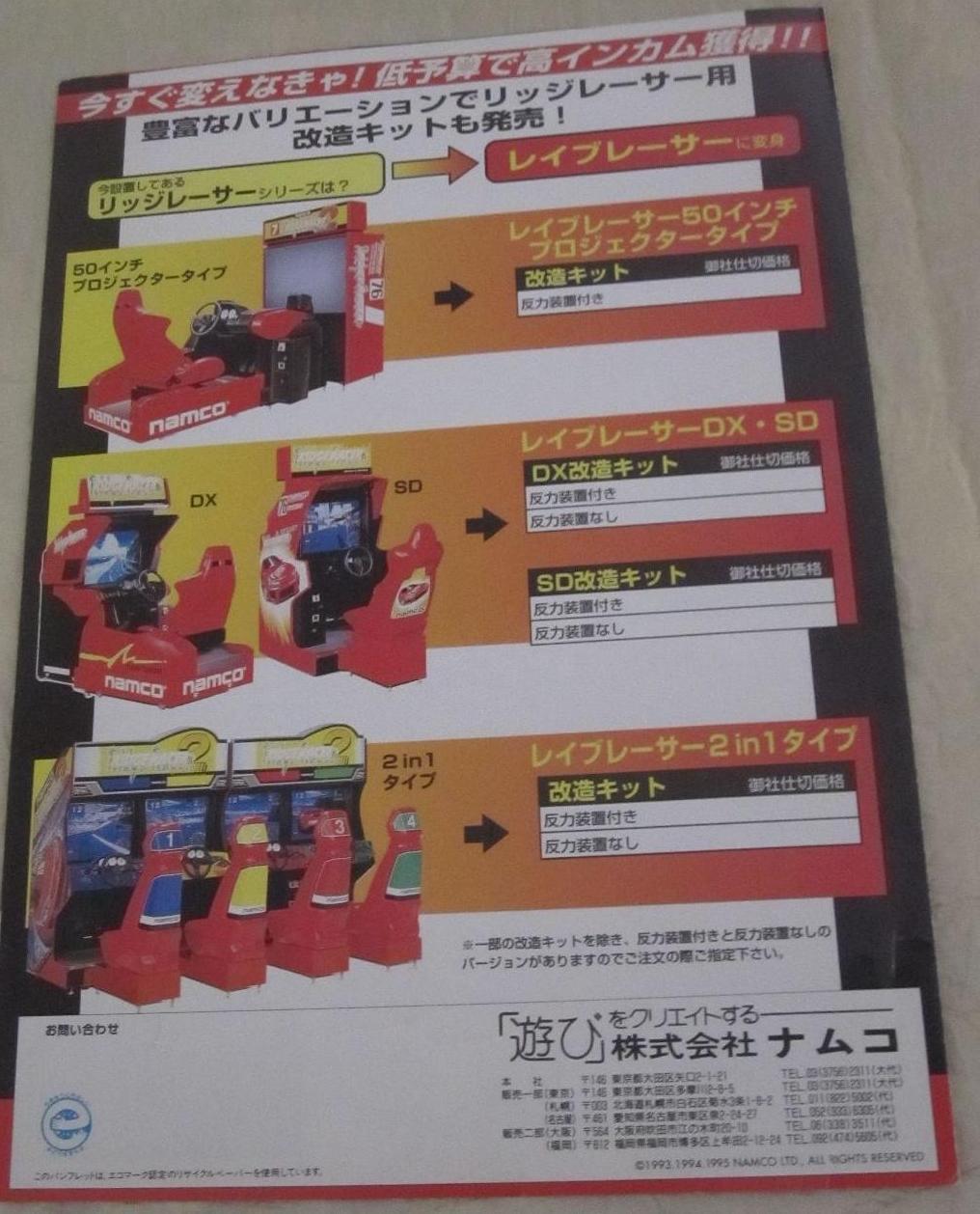 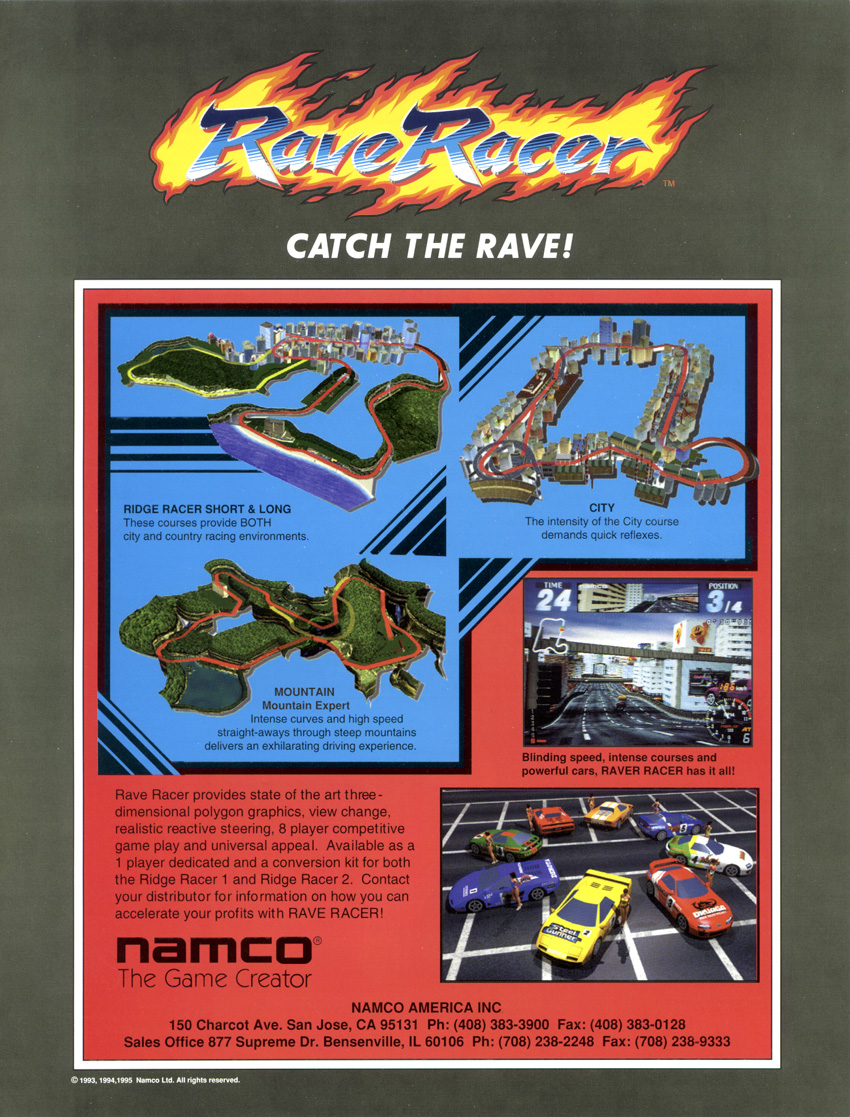 Rave Racer remake on PS4 would be amazing.

flipswitch said:
Type 4 FTW. Was the soundtrack created entirely by Namco, so they shouldn't have any license problem?
Click to expand...

They are still selling the soundtrack-CD, so I would be optimistic.

Give me AC5 and I will do cartwheels!
A

The PC Master Race was robbed. 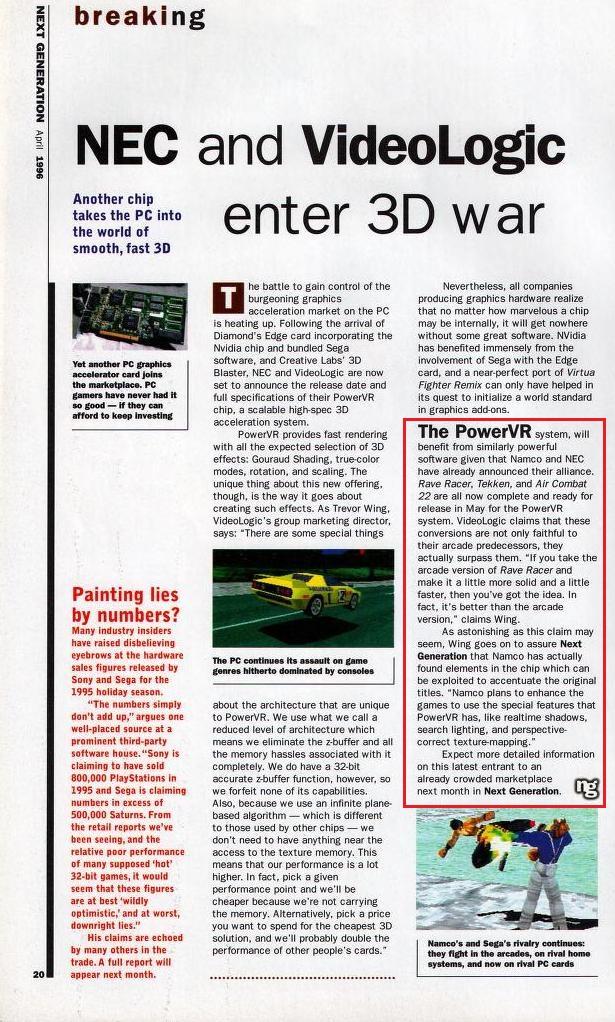 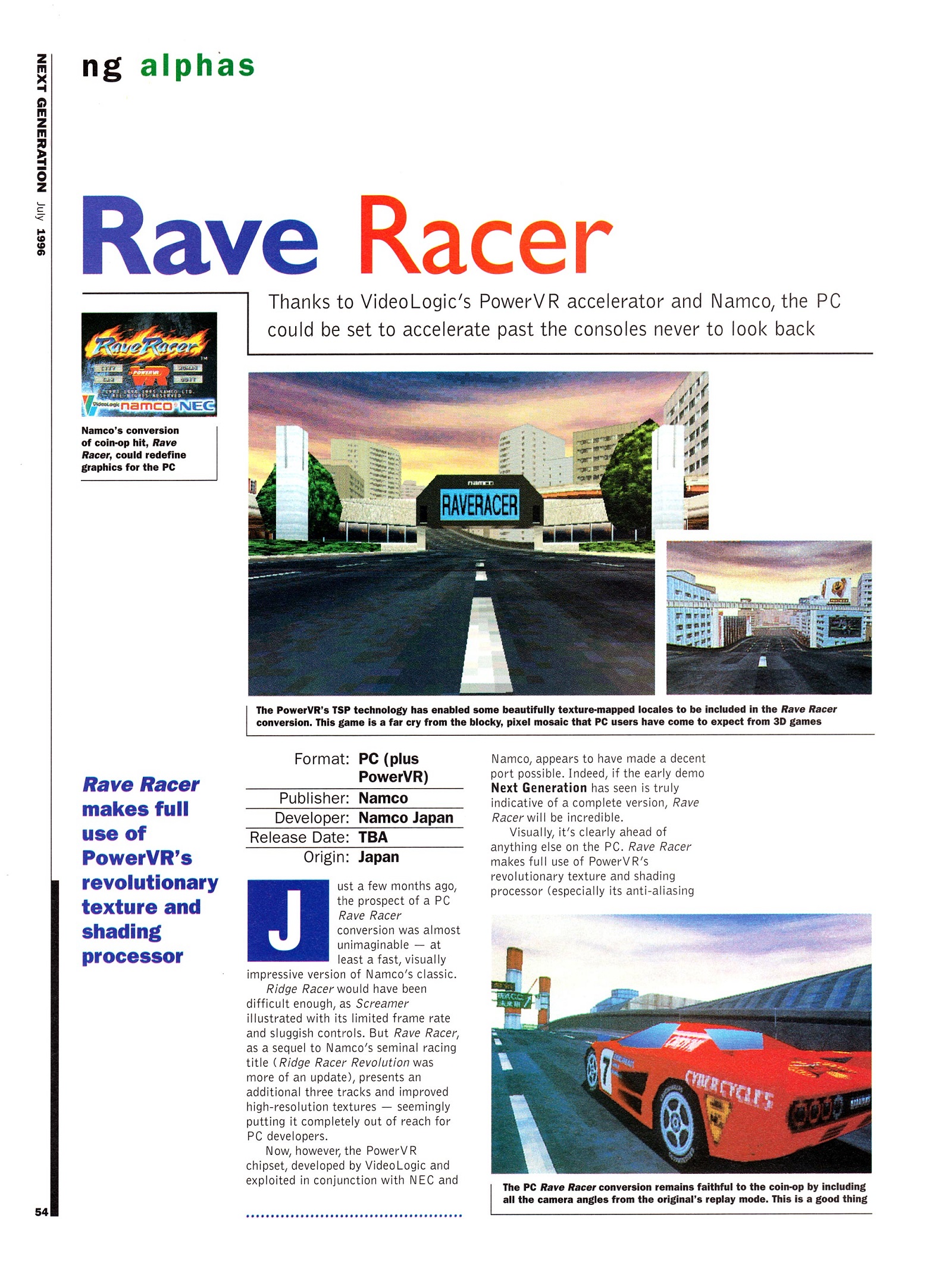 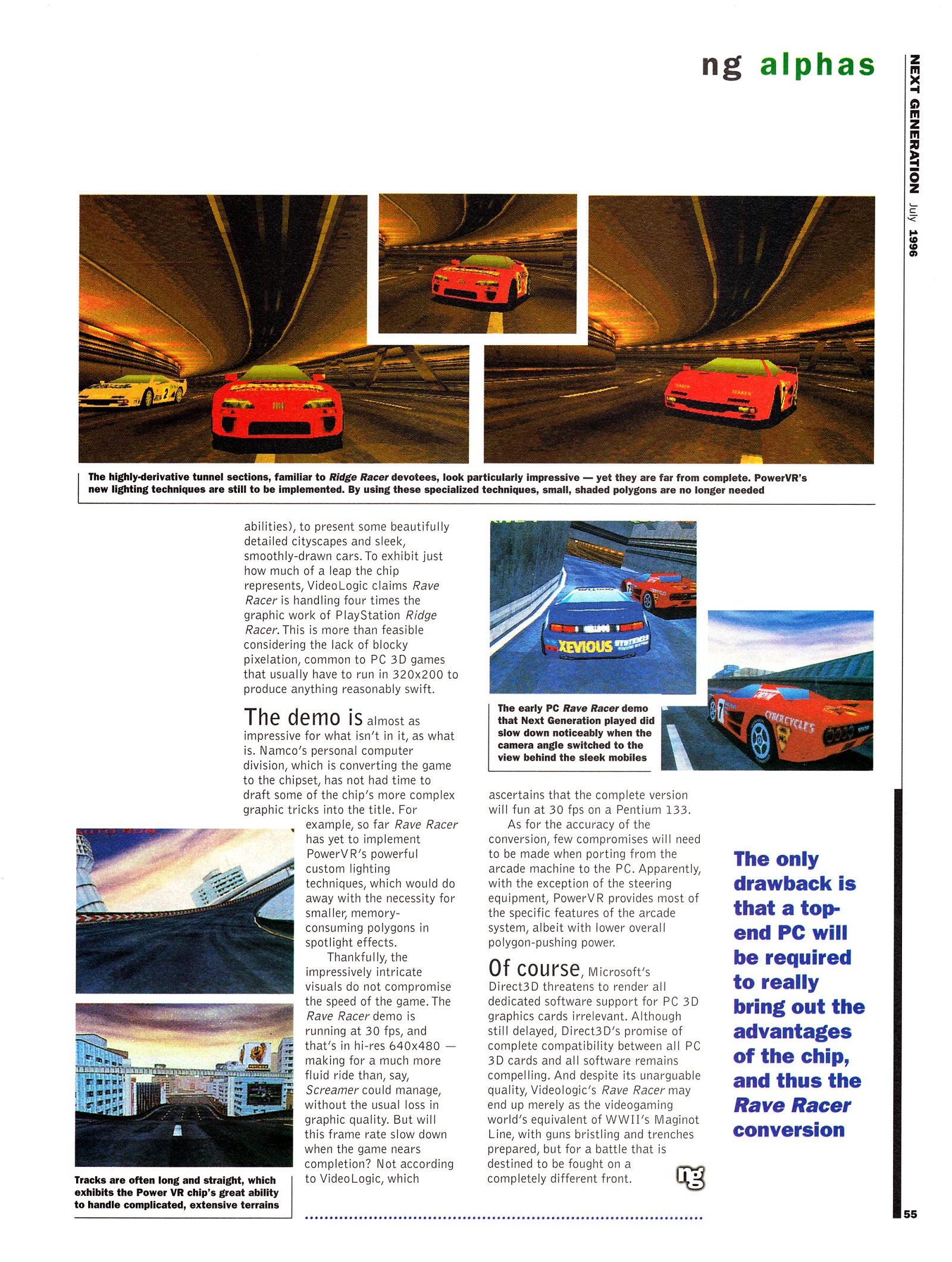 By a country mile.

Glad the Internet chose wisely in regards to RR.
Though I'd really like a ridge Racer / rave Racer arcade port.
Just 1080p that bitch and apply AA in spades and leave everything else as is.
Cheap
S

I need my flamenco guitars in HD, Bamco. Gimmie Zero.

but heres an idea, DONT REMAKE ANY OF THEM, make a new game in the same style as type 4
A

"I made the poll on an impulse in the middle of the night, Kono said in a follow up tweet, but as has been pointed out this morning, I forgot to include [Ace Combat] Zero. Sorry about that.

In Konos second poll, he asked whether people want a remake of a previous Ridge Racer entry or an authentic evolution of one of those games. The tweet encouraged fans to vote for Ridge Racer, Ridge Racer Type 4, Ridge Racer 7, or an Ultra Ridge Racer with many real cars. Currently, R4: Ridge Racer Type 4 leads the pack with 52% of votes so far. It is followed by Ultra RR at 19%, RR7 at 16%, and RR with 13%.

Kono has worked on several Ace Combat and Ridge Racer games during his career at Namco, serving as director of Ace Combat 5: The Unsung War. He is currently filling the producer role the upcoming Ace Combat 7. Its important to note that Kono does not indicate whether these two polls are officially sanctioned by Bandai Namco, so its unclear if the feedback will lead to any final products.
Click to expand...

Don't tease with this poll Namco. You better deliver on ACE5.
X

AC3 because I never played it. Already played 4 and 5
A

There is a God of Racing, and he smiles upon us.

But maybe make a new one in the same style after? Please? RR4's aesthetic identity needs to be the series trademark until the end of freaking time.
S

Honestly though, they really should just remake one of those PSP games considering they have all the previous tracks.

Edit: Okay, Rage wasn't in the running, they made the right choice.
M

Any of them, feed them into my veins Namco!
M

Edit: Actually thinking about it, since I never was able to play 3 & 2, I wouldn't mind seeing them remade.

RR Type 4 with current gen graphics would be amaaaazing
R

Mobius One or get fucked.

Would be nice to get an English version of AC3 with all the missions though.
S

No option for the original Ace Combat (aka Air Combat)?

The hell. Where is the goat ace combat Zero here?O_O

Either Ridge Racer 2 (the psp game) or type 4. I'd rather get RR2 because that has all the best tracks from every Ridge Racer game anyway. It's an amazing game.
M

Nah. It's a good racing game, and a decent attempt at appealing to the GT demographic by Namco's own admission, but it's not really what Ridge Racer is all about.

Menthuss said:
Zero. I'd be okay with 5 though.
Click to expand...

Nah. If zero does not get chosen. I would love more for 4 than 5 here. Mobius baby.
A

Neff said:
Nah. It's a good racing game, and a decent attempt at appealing to the GT demographic by Namco's own admission, but it's not really what Ridge Racer is all about.

I agree, but IGN's quote, not mine!

Neff said:
Nah. It's a good racing game, and a decent attempt at appealing to the GT demographic by Namco's own admission, but it's not really what Ridge Racer is all about.
Click to expand...

I think you're confusing type 4 with r:racing evolution or whatever it's called.
You must log in or register to reply here.

Your top 10 essential titles from the PS2 and GameCube libraries, combined.

Nov 19, 2021 started Tschumi
Nov 19, 2021
Mozzarella
TGA: The Game Awards Are Not For Audiences, They Are For Industry Representatives