Battlefield V battle royale prototype in the works at DICE

posts news as their odd job

EA’s DICE studio is testing a battle royale mode for Battlefield V that features similar gameplay to megahits like Fortnite and PlayerUnknown’s Battlegrounds, according to someone with knowledge of the studio who asked to remain anonymous.
Click to expand...
So the battle royale gold rush is on, and DICE is investigating how a massive, last player-standing mode would work with its current mechanics. But don’t expect to drop onto an island with 99 other players when Battlefield V launches this fall. The studio has not yet approved its battle royale for release, and it is still in the prototype phase. If DICE does decide that it’s happy with what it has, it won’t have it ready in time for the initial release.

If the mode does get the green light, Battlefield: Battle Royale could end up as a new part of Battlefield V as a free update. EA has provided a huge amount of support for its shooters in the form of regular expansions and downloadable content, and that is where a last-player-standing shooter makes the most sense. Anything is possible, though. EA could cancel the prototype, it could hold it off for the launch of the next Battlefield or a Star Wars: Battlefront sequel, or it could spin it out into its own game.
Click to expand...
https://venturebeat.com/2018/04/18/dice-battlefield-v-battle-royale/
Last edited: Apr 18, 2018

It was only a matter of time, cue Activision to do this next with Call Of Duty. I think DICE could do a great job and bring some control/ polish to this style of online play.

posts news as their odd job

CloudStrife_ca said:
It was only a matter of time, cue Activision to do this next with Call Of Duty. I think DICE could do a great job and bring some control/ polish to this style of online play.
Click to expand...
It's already been rumored that BR mode may be a part of Black Ops 4: https://kotaku.com/sources-next-call-of-duty-wont-have-a-solo-campaign-m-1825338768

Personally I think Battlefield is more naturally suited for a BR mode than Call of Duty.
I

Not too surprised. As long as it doesn't supplant traditional mp, then I don't mind.

GoldenEye98 said:
It's already been rumored that BR mode may be a part of Black Ops 4: https://kotaku.com/sources-next-call-of-duty-wont-have-a-solo-campaign-m-1825338768

Personally I think Battlefield is more naturally suited for a BR mode than Call of Duty.
Click to expand...
I agree with you fully, I also felt that Battlefield is more suited for it over Call of Duty. Red Dead Redemption 2 will also have a PubG/ Fortnite inspired Battle Royale mode, its like discovering "capture the flag" mode for the first time, now everyone is off to the races with it but I think Battlefield will do it best.
A

I wonder how the shrinking world will work?

I can already see EA licking it's chops at the possibility of making bank on a lootcrate system here ala fortnite.
Last edited: Apr 19, 2018

As long as the core mp game types are still here cuz from what I’ve tried ... BR GAMES ARE BASURA

Hate it when a game mode/type comes out and every damn studio needs to hump the legs of the cash cow like a rabid dog.

Focus on what you're good at, please the fan base and let those games that are in the lime light have their 15 minutes of fame. Because if you burn your loyal fans and can't compete in the new arena because everyone is already settled into what they like then you have just sunk your own goddamn ship.

Are we far away from getting Heavy Rain Battle Royal? /s

Strife In a Teacup

Dunno about a Battlefield BR, but I could go for a Battlefield 2 (2005 PC) type experience with the scope of Ghost Recon Wildlands with a large multiplayer limit.
Last edited: Apr 19, 2018

The originality in the market. Let's copy past everything.

They better hurry up. They can seriously dent PUBG's market if they do.

There is another PUBG clone, Ring of Elysium, by Tencent that is actually way better than PUBG in terms of not being clunky.

AlphaMale said:
I wonder how the shrinking world will work?
Click to expand...
levolution that makes the island fall apart around you from a rampaging megalodon

What we need is a battle royale hero shooter dota game.

Strife In a Teacup

Spukc said:
What we need is a battle royale hero shooter dota game.

Idiots
Click to expand...
Or a Highlander Battle Royale. Can't go wrong with a tag line of, "There can only be one".

WaterAstro said:
They better hurry up. They can seriously dent PUBG's market if they do.

There is another PUBG clone, Ring of Elysium, by Tencent that is actually way better than PUBG in terms of not being clunky.
Click to expand...
It’s Fortnite’s market now. PUBG is yesterday’s news at this point.

As long as it doesn't take away any of the classic game modes and doesn't become the main focus of the game I'm ok with this.

I'm kinda curious to see what's going to happen to PUBG once a more polished, content packed and optimized BR game hits the market (You could argue that's Fortnight but in terms of style and setting Battlefield is obviously closer)


dottme said:
Are we far away from getting Heavy Rain Battle Royal? /s
Click to expand...
It's coming. But instead of guns they just drop 30 players on a randomly generated mall and the first one to find Jason wins. Instead of weapons you unlock different types of voices and ways to call Jason. If you are unlucky you just get a rather quiet "Jason?" but on a good run you might get the classic "JASON!!!"
Last edited: Apr 19, 2018

Great, now call it Battlefield ONE as in ONE person. Complete the circle of confusion. I can already see the marketing.
Only ONE survives. Be the ONE.
Z

Market is flooded and boring with these games before they are even released...

AlphaMale said:
I wonder how the shrinking world will work?
Click to expand...
Sand storms are already in the game, so the tech exists

Spukc said:
What we need is a battle royale hero shooter dota game.

I don't play BR games but i'm sure dice could do something interesting with it.

Everything about Battlefield from the engine to the controls lends itself to a really particular kind of multiplayer experience. The more they try to adapt it to other trends, the more the whole suffers. The key is to keep things in line with the spirit of the franchise. I thought team Deathmatch was horrible in Battlefield 3 but Squad Deathmatch was cool in BFBC2, where you had four small teams going at it with a tank up for grabs in the middle I don't know if they could do something similar with battle royale.
C

CloudStrife_ca said:
It was only a matter of time, cue Activision to do this next with Call Of Duty. I think DICE could do a great job and bring some control/ polish to this style of online play.
Click to expand...
Agreed. Let the pro's make this mode and own it. Battlefield would be amazing and look gorgeous

VertigoOA said:
It’s Fortnite’s market now. PUBG is yesterday’s news at this point.
Click to expand...
In terms of Battle Royale, yes, but Fortnite is dominating because of its arcade casual nature. PUBG is still in that realistic shooter market, and if Battlefield takes over, it would be hard for PUBG to really keep their audience. I can already imagine Battlefield really taking a chunk out of the BR space because Battlefield is mechanically not clunky as shit like PUBG. If EA makes it free too, then it'll be a real contender. I doubt they will though lol.

What's the setting for Battlefield V?

Battlefield will crush PUBG if it gets BR. Better engine, more talented devs, more platforms. It will be a question of price that dictates the player base size. BF games tend to get cheap fast, but if they can offer a stand alone version it will be huge.

I bet the lone survivor gets to buy a loot box.

Good, we need something polished and I'm not a fan of Fortnight. Don't understand all of the negativity if they are looking at it as a game mode and not supplanting the normal modes. A great new BF with conquest, tdm, and battle royale? Fuck yes, sign me up. There are so many variants/things they could try with the formula, could easily be the best BR game.
N

n0razi said:
Im OK with this because Frostbite is a much better engine than whatever PUBG is using
Click to expand...
It's funny because PUBG is using Unreal Engine 4, which Fortnite is obviously using too, but they decided to emulate ArmA 3 as much as possible for some reason, and ArmA 3 is so clunky.

Well it's official, I'll check back in on AAA multiplayer gaming in five years.

and it (supposedly) still has single player unlike black ops 4. I bet if dice got rid of the the sp, no one would bat an eye 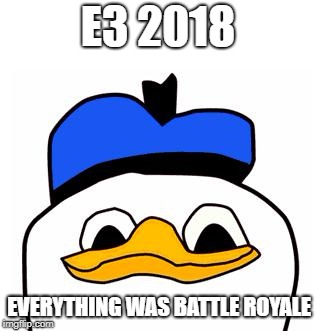 It obviously depends on the implementation but it could be a really good fit for Battlefield, I've always imagined what the game would be like with loads more players on the battlefield.

I suppose it could end up in their next Star Wars game too.

i don't see a good BR mode in BF or even COD, however i can easily see an amazing BR mode in Halo
V

When I first started playing PUBG on pc in the early days I couldn’t help but think what DICE would be able to do with this mode, mainly because of the bad optimization, terrible graphics and animations at the time in PUBG (its gotten much better). I can see an amazing BR game in a BF4 setting. Same guns and abilities, same mods and even some of the same maps. If EA just released a standalone version for $30 they would kill it.

50 vs 50 multiplayer mode with only one life sounds dope

WaterAstro said:
They better hurry up. They can seriously dent PUBG's market if they do.

There is another PUBG clone, Ring of Elysium, by Tencent that is actually way better than PUBG in terms of not being clunky.
Click to expand...
Yeah, it doesn't look abymal and framerate is solid too.

My PUBG GAME crashed again! No other game does this on my pc. BF BR can’t come sooner.