This is how people should do a bit of a SHAKE SHAKE to the OP for not including the actual best game in the poll.

Went with goldeneye, perfect dark is better in more or less every way, but it just runs too poorly on the 64 one of the few games I have played until sunrise
Last edited: Jun 30, 2020
Reactions: Kokoloko85

Ocarina of Time opened up the open world genre, and it's a verified 100/100 game so that takes the #1 spot but also Majora's Mask requires attention.
Reactions: Skullkid94700

Ravi_elite said:
No wrestling games? No Mercy
Click to expand...
As much as i have love and nostalgia for the n64 wrestling games, the controls and animations a way to stiff by modern standarts.

OoT is the objectively better game, but my personal favorite has got to be Banjo-Kazooie. It has so much personality, a fantastic OST, incredibly intelligent game design, fun characters...I played every save file to 100% completion.

Mario 64 is an important title -- not as a game, but what it did for video games as a whole, and I believe deserves an honorable mention here.

My favorite wacky title from N64 would have to be Mischief Makers. I'd be all over a remake/port/remaster soooo hard.
P

I Love Rock 'n' Roll said:
Came to vote for Ware Racer 64. So note for me (Yoshi and Kirby in the list!

Click to expand...
Really wish Nintendo would revisit the franchise. Jet ski racing genre has been dead for too long.

I could say Ocarina of Time, because it was the next level in gaming at the time, but I have a profound love in Banjo Kazooie. It's on the top tier of platforming even to this day

DAHGAMING said:
No Buck Bumble ?
Click to expand...
Thank you for reminding me this game exists. I now have the song stuck in my head and I'm okay with that.

best game? or most impressive technically?

best is such an ambiguous term - need more context of what type of answer you want.
Last edited: Jun 30, 2020
Reactions: myfriendtim

parathod said:
Really wish Nintendo would revisit the franchise. Jet ski racing genre has been dead for too long.
Click to expand...
Naaaa, well not for me.
I found the sequel on GC as beautiful as boring. I just hated it.
Last edited: Jun 30, 2020

Poll is missing quite a few options

Turok, Wayne Gretzky 3D Hockey, Blast Corps, and Shadow Man are not even on the list.
Last edited: Jun 30, 2020

But frfr, Conker is the goat and it isn't on the list.
Reactions: Blue Apple 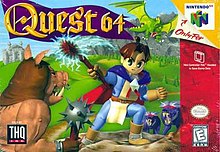 Zelda is great and I love it.

But Perfect Dark blew my mind. I've already spent months playing Goldeneye and when this absolute legend of a game came out I could not believe how much they improved everything (but the framerate).

So many games got equal time on that system for me. SM64/OoT are the obvious picks but for good reason. I still play Mario 64 today and it's fun as hell.

Well it's between Mario 64 and Zelda OOT.

Zelda OOT gets my vote.
D

SaintJonathan said:
Thank you for reminding me this game exists. I now have the song stuck in my head and I'm okay with that.
Click to expand...
It is in my head often, welcome to my world.
Reactions: SaintJonathan

Close between Mario 64 and Ocarina of Time, but I think Ocarina holds up better, so it gets my vote.

For me it was definitely Wave Race 64. I have played it the whole day with my friends.
H

Anyone who doesn't say Perfect Dark is either lying, not telling the truth, or just fucking ugly.

JordanN said:
Some of those games are just so hard to go back to, because the frame rates are really really rough. Or the N64 controller would have killed your hands trying to play them (*cough* Mario Party).

Only exception might be Ocarina of time, just because it's more puzzle based and generally has a slower pace.

Dissenting opinion but I want to go with Pokemon Stadium 2.

The visuals are much more easier on the eyes thanks to the cartoon style, and it also had those mini-games which I thought were a lot of fun.

I know there are better and more influential games, but I had the most fun with Stadium 2. I’d love to see a new take on it.

Perfect Dark was just a better GoldenEye and everyone who voted for GoldenEye knows it. Come...join the Darkside.

Land of the OKC Thunder

I was offended by you calling it Lylat Wars to be quite honest.
R

Love playing oldies, from consoles and PC, but very few N64 games hold up these days, played as back then, imo. Mario 64, OoT and similar caliber Nintendo games do though. Hard to pick just one given their quality but the choices aren't that numerous tbh.
Last edited: Jul 1, 2020

Jigsaah said:
Perfect Dark was just a better GoldenEye and everyone who voted for GoldenEye knows it. Come...join the Darkside.
Click to expand...
Its close. First few levels of Perfect Dark Is near perfect..... Golden eye was awesome.
Multiplayer = Golden eye
Campaign.... tie maybe perfect dark

Time splitters 2 is the only game that holds that Golden eye and Perfect Dark soul
Reactions: Jigsaah

Time splitters 2 is the only game that holds that Golden eye and Perfect Dark soul
[/QUOTE
Click to expand...
Time Splitters 2 was awesome. Can't front on that.
Last edited: Jul 1, 2020
Reactions: Kokoloko85

That Pokémon Snap isn’t on this list is a crime on par with Human trafficking.

Ocarina of Time is the best. I chose Goldeneye because it was a godly game back then. And after that, WWF No Mercy. BECAUSE REASONS.
You must log in or register to reply here.
Share:
Facebook Twitter Reddit Email Link
Top Bottom