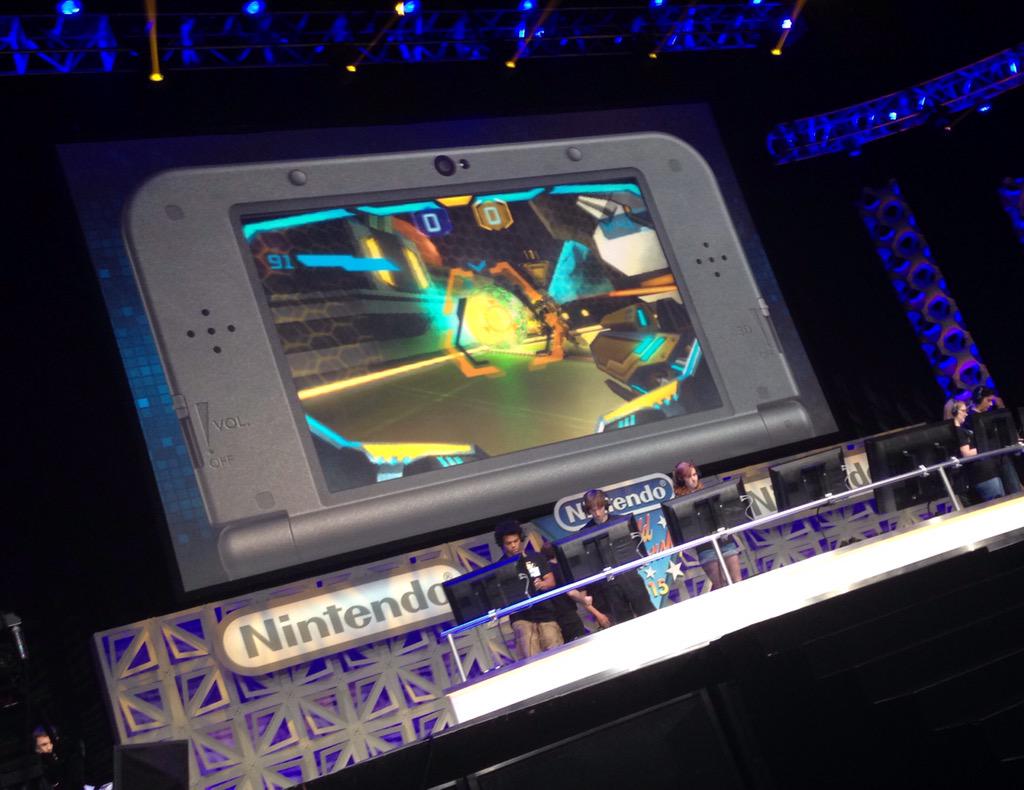 - An FPS mutiplayer Arena team shooter
- Objective: Try and shoot the goal repeatedly to get it in the opposite's team goalposts i.e. like football.
- When you score a goal, the goal gets smaller
- 3vs 3 played on NWC
- First team to 3 goals
- Use your laser to hit the ball back
- Cannot shoot laser constantly, have to manage your laser energy (power management)
- There are physics on the ball
- Arena also have verticality
- Your mech can be disabled and you are removed from the map
- Multiple mechs can be down at a time
- Blasting a ball at another player means you take damage
- Powerups can be collected on the map
- There is a jet power-up which forces jets to eject players and stuns them for a while
- Hold A button to do a stronger blast
- Balls drop from top of the arena at start of game
- You can score own goals accidentally
- Use R to strafe
- Use L to lockon


efyu_lemonardo said:
Any footage I can watch on mobile?
Click to expand...


Rainbowgun said:
The official Nintendo 3DS Facebook Page from Germany calls it an yet unknown Game

AzVal said:
I mentioned on the NWC thread and found the moment where you read Clearly "G.F.S. AEGIS" which is in line with the ship naming in the Metroid Galactic Federation naming for "G.F.S. Valhalla", "G.F.S. Olympus", etc.

Thanks Wario 64 for the gif.
F

Nintendo be on a roll today, I love it!
T

The crowd was not happy.
B

Metroid Prime Hunters is back.
D

You were quick lol. Looks fun!

When will us normal people be able to play?
S

What am I seeing?
Z

I want to know exactly who is behind this.
E

I am intrigued.
H

This is F2P I imagine.
M

I always have thought that Hunters was underrated...

Looks like mech soccer with guns instead of feet?
J

Did Retro make this game? It looks like Metroid Prime. The UI, that is.
F

Kinda hard to get excited for this when something like Rocket League is coming out soon.
I

Such a cool way to announce a new game. More of this, nintendo!
P

This game is a bit like Firestriker for SNES or Pong. You need to bat the ball into the other goal using projectiles.
N

Sendou said:
This is F2P I imagine.
Click to expand...

Either that or like $3 on the eShop. It looks terrible to me. Like something they cooked up on the Prime Hunters engine like 2 days before the show
K

I'm actually really intrigued by this idea. A first-person shooter focused on shooting a ball into a goal instead of shooting other players.
A

Looks like a retro studios game. I hope it is. The salt would be glorious.
B

So what's the excuse going to be that this "doesn't count" as a new IP?
D

After Splatoon, I need more of them, Nintendo must have some good ideas
T

Metroid Prime Hunters, is that you?

I'm getting a serious Metroid Prime vibe from this game's HUD. Wonder if this is from Nintendo Software Technology.
M

The Metroid ElectricBlanketFire was hoping for!
H

Looks a lot like Protocol by Sabarasa that got canned for WiiWare.

BatDan said:
So what's the excuse going to be that this "doesn't count" as a new IP?
Click to expand...

No recognisable characters or eshop only of course.
N

Spyder_Monkey said:
Looks like a retro studios game. I hope it is. The salt would be glorious.
Click to expand...

NST made Prime Hunters on DS if I'm remembering so maybe it's them.
S

but without the fun
C

Nintendo are really pushing in to fps/competitive multiplayer and trying to expand it. Another great, interesting concept. Reminds me of the foot ball game in Anarchy Reigns. The visual identity could be stronger though.
C

I love it when Nintendo does crazy stuff like this...
M

Oh so this is what Samus has been up to
F

It's no looker, but it's sufficiently different from the rest of the 3DS lineup that I'm interested. Hope it's another Garage IP.
D

Is this one of the Garage games?
F

This reminds me of Bombing run from UT2k4
G

FluxWaveZ said:
Metroid Prime Hunters is back.
Click to expand...

What the hell odds could you have gotten for Nintendo's next two new IPs to both be team based, goal based, shooters?

It's cool, but also so far out of left field it's unreal.
You must log in or register to reply here.