Today's Patch 9.1.5 PTR build includes a surprise update to two very obscure paintings from vanilla. While one has had its sexuality toned down, the other painting has been replaced entirely. 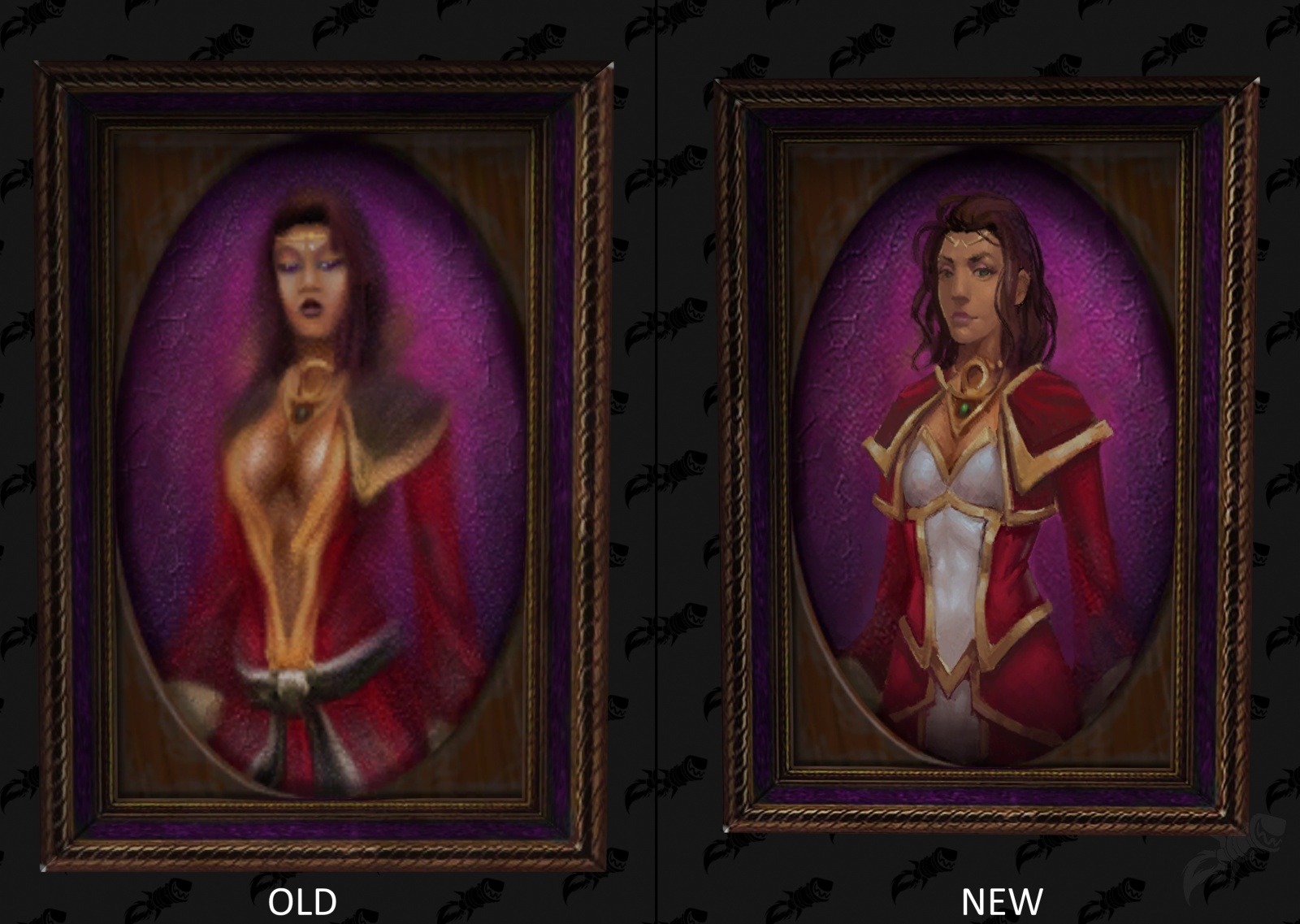 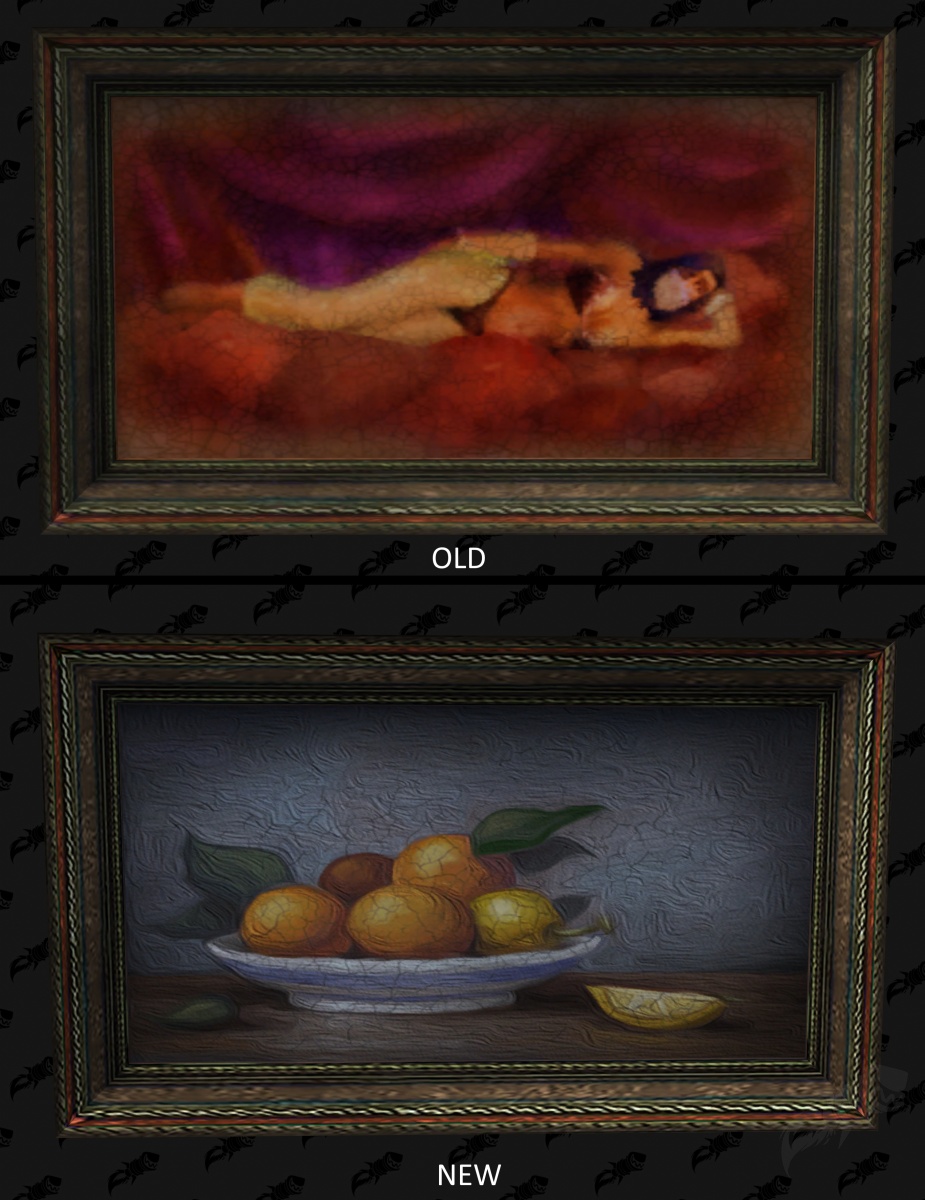 I can't anymore. This is just too much.

The best part, the 2nd painting is an homage to several classic paintings in the same style, but Blizzard is overcompensating just as expected.
Reactions: Celcius, TurboSpeed, clem84 and 48 others

At what point does the gaming industry scrub the female body completely from games?
Reactions: Celcius, TurboSpeed, clem84 and 43 others

Foorbits said:
At what point does the gaming industry scrub the female body completely from games?
Click to expand...

At this rhythm? Q1 2023
Reactions: TurboSpeed, decisions, SoraNoKuni and 5 others

The fruit basket is the best swap so far HAHAHAHHA!
Reactions: GrayFoxPL, phaedrus, Kerlurk and 11 others

Who cares? Who's staring at these?
Last edited: Sep 16, 2021
Reactions: nahcir, chilichote and kingpotato
M

This is very stupid and virtue signal-y. This does nothing. Women can look however they want, including how this pictures originally look, as long as you don't sexually harrass them Blizzard. God damn.
Reactions: TurboSpeed, Thanati, NeoIkaruGAF and 6 others

This is just ridiculous at this point. I don't understand the point here. It's like people are trying to paint a new reality that somehow beauty is shameful.
Reactions: TurboSpeed, NeoIkaruGAF, JoduanER2 and 12 others

The female form is being erased from games, but I have to be made to feel insecure due to the unrealistic beauty standards set by Kratos with his bulging biceps and incredible abs. Double standards.

I'm pretty sure they do this intentionally at this point for the publicity. They never change everything at once, it's always incremental so they they can have headlines throughout the year. They love the backlash from certain fans and the headlines it brings. The cherry on top is being able to call everyone who has no issue with the human body or just want the game to remain the same "evil" and perverted". They have the magical "progressive" bulletproof vest they can use to deflect and shut down any criticism.
Last edited: Sep 16, 2021
Reactions: poodaddy, NeoIkaruGAF, Terenty and 10 others

They want to update the game but should care more about update themselves...

And Blizzard will continue to be shit at listening to their actual paying customers, and continue to go all in on "woke equity" bullshit thinking that'll absolve them of their sexual harassment issues (it wont).

Though you can bet this is due to input from their "Diversity Equity and Inclusion" team.
Last edited: Sep 16, 2021
Reactions: TurboSpeed, Phase, Fake and 4 others

Alebrije said:
Meanwhile on most of world museums 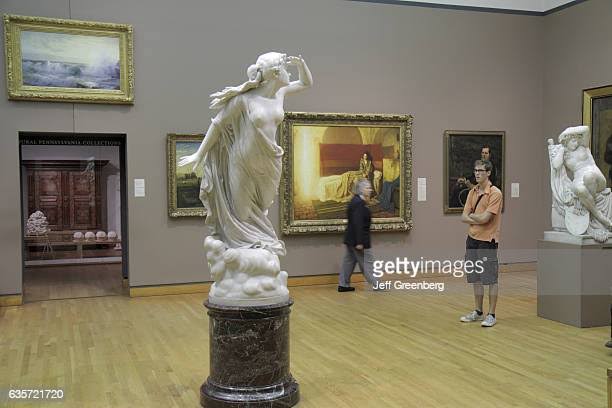 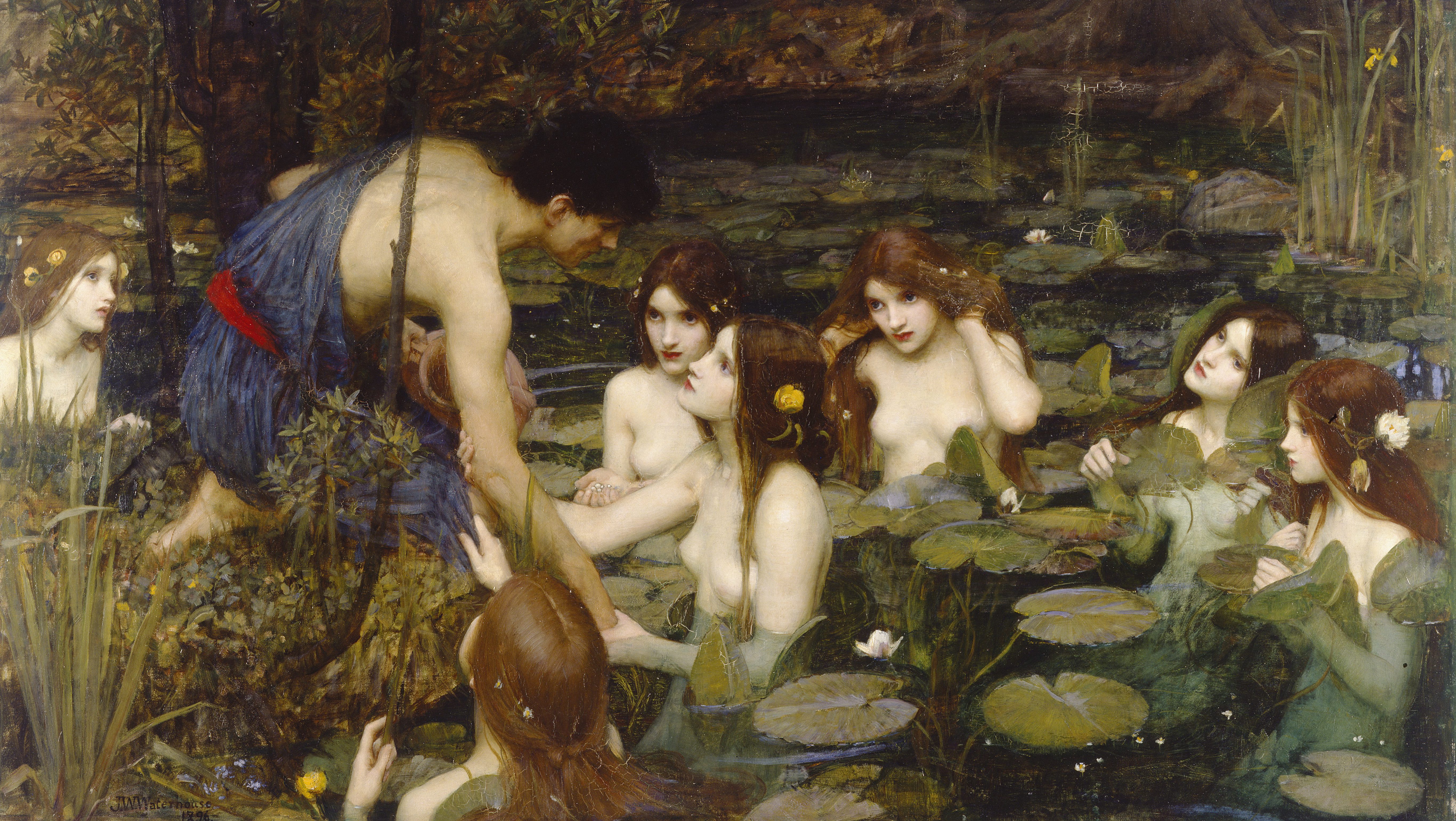 The museum has removed John William Waterhouse’s "Hylas and the Nymphs" as part of a work by another artist.

What does this do to make World of Warcraft a better game though?
Reactions: Fake, kanjobazooie and CGiRanger

Alebrije said:
Meanwhile on most of world museums

Thankfully they are not run by game companies.
Reactions: Bert Big Balls, strange headache and GymWolf

Pre-order Project EVE everyone. Do something positive instead of just watching everything get worse.

NieR Automata selling just 2 million turned Yoko Taro from a failure into one of the most profitable directors at SQEX, with greenlights for multiple projects. There are basically no Korean AAA console games, so Project Eve selling 1-2 million will mean more games like that.
Reactions: Phase, Fake, CGiRanger and 2 others

This saddens me, I have 10k hours of wow gameplay, left 5 years ago, glad I did
Reactions: Lupingosei

Jokes on them, the fruit picture looks like boobs on a plate 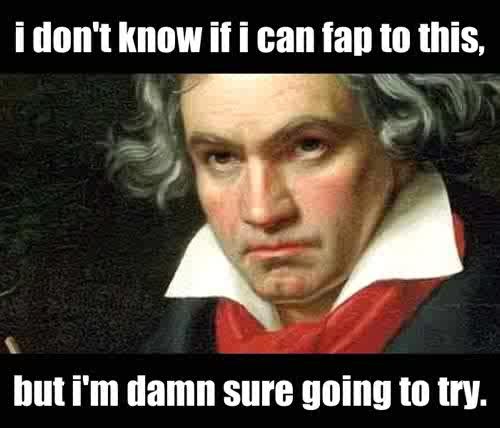 Reactions: TurboSpeed, Drac84, NeoIkaruGAF and 23 others

More bullshit to distract from their real problems.

I’m going to jerk off to that bowl of fruit out of spite.
Reactions: NeoIkaruGAF, Catphish, Terenty and 3 others

They literally turned the sexy woman into an object
Reactions: TurboSpeed, NeoIkaruGAF, justiceiro and 19 others 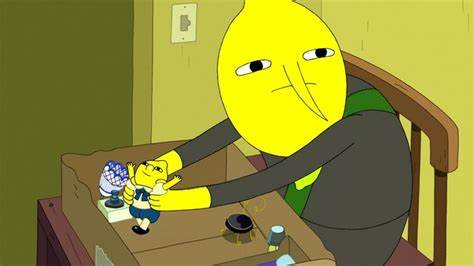 Reactions: Phase and GymWolf
B

While China's government is banning game industry to produce certain content, the western devs censor content themselves, I wonder if blizzard game devs all have daughters that rely on onlyfans to earn their income.

20 years from now those oranges will be deemed overly sexualized.
Reactions: NeoIkaruGAF, Terenty, McCheese and 1 other person

Dont you know, a female nipple is much more traumatic for the the youth than a man getting chainsawed in half in gears of war
Reactions: NeoIkaruGAF, tommib and Phase

Reactions: Fbh, StormCell, Inuteu and 9 others

Thanks Blizz for saving me from titties
Reactions: NeoIkaruGAF

hey, look on the bright side, at least it's not a deer person or a furry.
Reactions: poodaddy, NeoIkaruGAF, tommib and 1 other person 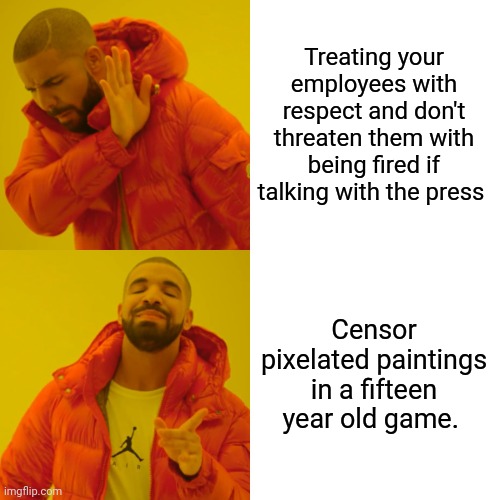 It's just PTR right? gives them time to give her hair dye and a buzz cut before retail.

No wonder folks are flocking to Final Fantasy when this is the stuff their development team waste resources on.
Reactions: NeoIkaruGAF and Bert Big Balls

They shoulda made the second photo a dude in a banana hammock.
Last edited: Sep 16, 2021
Reactions: NeoIkaruGAF and Kuranghi

If nobody's been following, they've been at this for weeks now following the lawsuit stuff. Some of the recent achievement renames:

Yeah. Doesn't stop there, they also recently replaced "blacklisted" with "blocklisted" in some of their code, although that's been going on across tech since BLM was flavour of the month.
Last edited: Sep 16, 2021
Reactions: NeoIkaruGAF, Mattyp, Drew1440 and 3 others

They need to go bankrupt.
Reactions: Mattyp, Phase, Umbasaborne and 4 others
S

Today's Patch 9.1.5 PTR build includes a surprise update to two very obscure paintings from vanilla. While one has had its sexuality toned down, the other painting has been replaced entirely.

I can't anymore. This is just too much.

The best part, the 2nd painting is an homage to several classic paintings in the same style, but Blizzard is overcompensating just as expected.
Click to expand...

They actually believe this is going to help them? I regret all my time in Overwatch, and am fully glad I never touched their other games on console and pc. I played some Diablo games as well, but that was a long time ago. Overwatch was an exercise in stress even before all this stuff going on now.

Hargate said:
More bullshit to distract us from their real problems.
Click to expand... 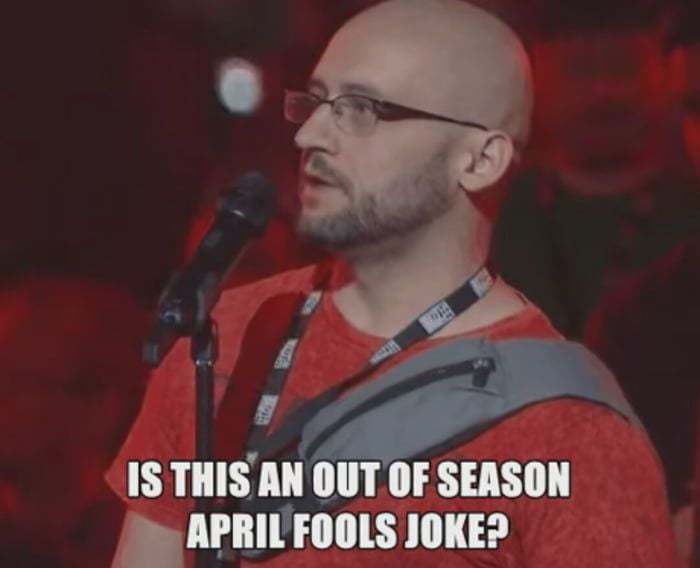 We are so close to having burkas as the standard for women in videogames.
Reactions: Forsythia, Phase, Fake and 4 others

Macattk15 said:
This is very stupid and virtue signal-y. This does nothing. Women can look however they want, including how this pictures originally look, as long as you don't sexually harrass them Blizzard. God damn.
Click to expand... 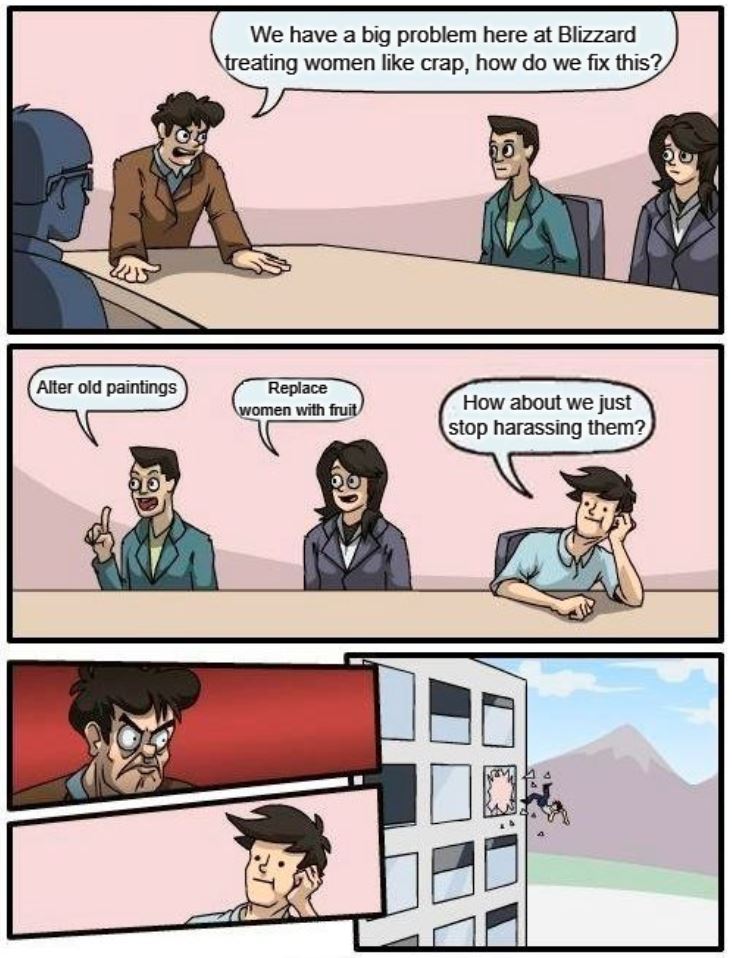 winjer said:
We are so close to having burkas as the standard for women in videogames.
Click to expand...

GymWolf said:
Jokes on them, the fruit picture looks like boobs on a plate

If you want to turn it up to Souls difficulty, do it while listening to this.

ResilientBanana said:
Who cares? Who's staring at these?
Click to expand...

Probably Blizzard, since it was enought for a completelly change(woman into a fruit basket).
Reactions: BlackM1st
T 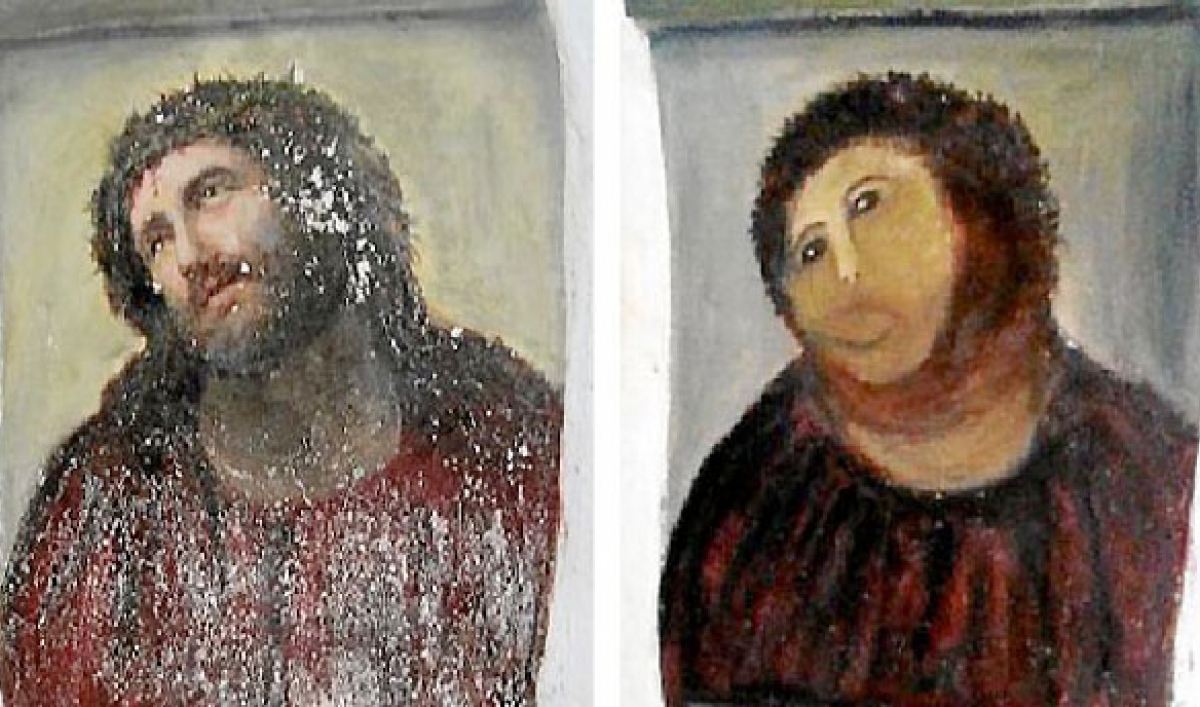 Good thing I never had any interest in this fucking game anyway.

I just posted the thread about Sir Clive Sinclair dying.

It made me a bit sad...but fucking hell, I realised how privileged I was to grow up in the 80's. There's nothing sad about that. What a grotesque, pathetic time we live in. JK was right, these people literally do want to cancel women from existance.
Last edited: Sep 16, 2021

How can you say prostitution is a legitimate profession and want to get rid of "over sexualization" in video games? 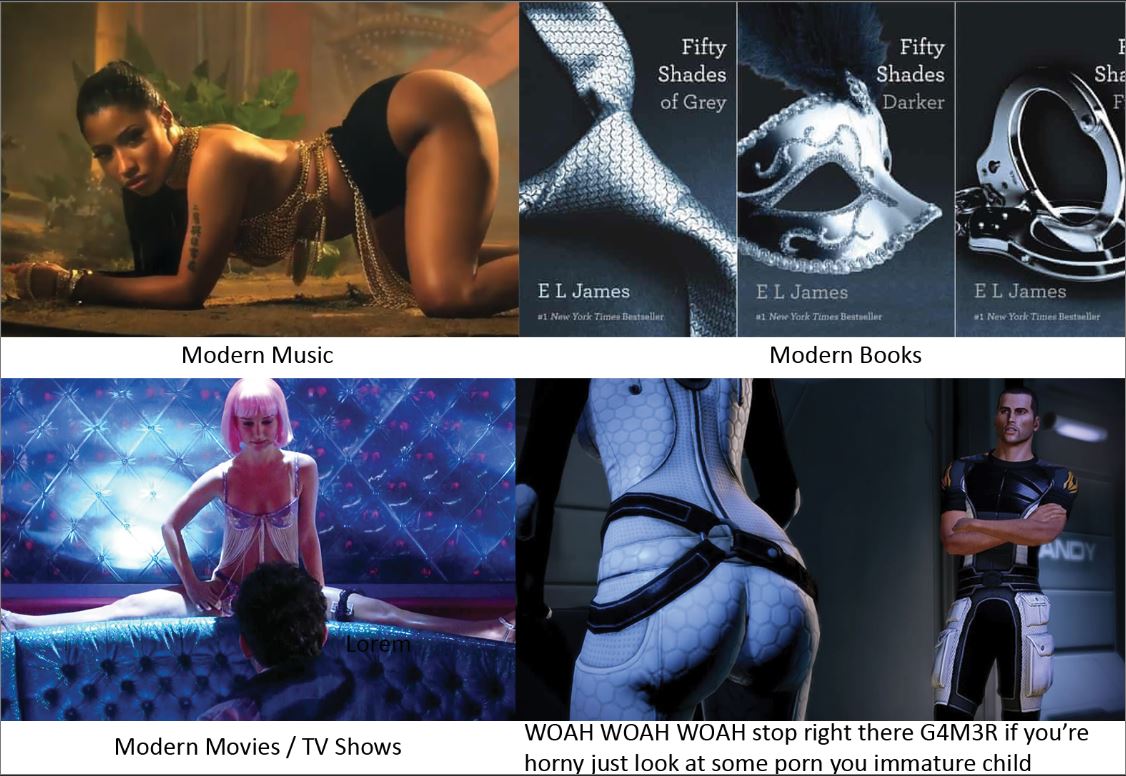 Reactions: Holammer, Aenima, NeoIkaruGAF and 33 others
You must log in or register to reply here.