Bob Ross was an amazing human being.

I loved watching his shows. Actually I thought all those live painting shows were awesome.
http://www.ebay.com/itm/Large-BOB-R...04414912?pt=Art_Paintings&hash=item23289083c0

The man is a legend.

Makes me want to paint My sister used to paint, and I wanted to paint as a kid but never got the chance.
D

He wasn't a human being, he was a God among Squirrels
Click to expand... 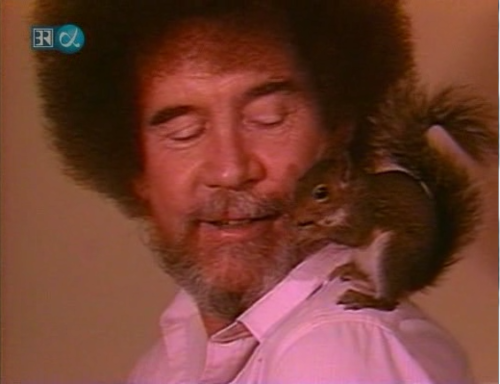 Lazy Man's Wallpaper said:
Can't tell you how many times I'd be all, "Yup, Bob just fucked it up for good there," then WHOA A MOUNTAIN
Click to expand...

Fucking this. Dude was a magician at turning blobs of shit into masterful landscapes.
C

Hell yeah he was, I used to watch his show all the time when I was a kid.

GTI Guy said:
I always loved that at some point in his process he does something that makes it totally look like he screwed up the painting then he does some stuff and magically it looks awesome.
Click to expand...

It's the power of the Happy Little Trees.
B

I love BR but I also kind of hated him for making it look so easy. 'Just push up on the brush a little and make this diagonal stroke and BOOn, it's beautiful landscape.'
A

he had a really nice philosophy about life too. Seemed like a kind guy
F

Lazy Man's Wallpaper said:
Can't tell you how many times I'd be all, "Yup, Bob just fucked it up for good there," then WHOA A MOUNTAIN

This is how I first heard about him, lmao
F

I read somewhere that he used to be a drill sergeant.

Ross enlisted in the United States Air Force at age 18. The Air Force transferred him to Eielson Air Force Base (in Alaska), where he first saw the snow and mountains that later became recurring themes in his artwork. He developed his quick-painting technique in order to be able to create art for sale in brief daily work breaks.[4] Having held military positions that required him to be, in his own words, "mean" and "tough," "the guy who makes you scrub the latrine, the guy who makes you make your bed, the guy who screams at you for being late to work," Ross decided that if he ever moved on from the military, "it wasn't going to be that way any more," vowing "never to scream again."[4]
Click to expand...

He was awesome when I was young, loved his soothing voice and how effortless his process for painting was. It felt so improvisational but perfect. Really almost got into painting, very inspirational.
B

I used to watch the Joy of Painting before bed because of the beautiful things his voice would do to my head. Now the kids call it ASMR.
Y

"Oh, if you have never been to Alaska, go there while it is still wild. My favorite uncle asked me if I wanted to go there, Uncle Sam. He said if you don't go, you're going to jail. That is how Uncle Sam asks you."
A

Used to watch this bro every day as a kid. Such a boss.
S

It all makes sense now. Bob Ross was actually Radagast the Brown.
M

Bob Ross was great. Many lazy Sunday afternoons in my childhood were spent chilling to his show.

I'm kinda surprised these full episodes haven't been shutdown yet. I thought there weren't any on YT because of Bob Ross Inc. and their copyright infringement claims.
D

Listening to his voice has always put me in a calm state of mind. Taking a short nap while listening to Joy of Painting is probably the most relaxed any human being could ever be.
F

Loved Bob Ross to death. As an artist myself, I was captivated by his show growing up. I watched it every damn chance I got.

About as influential to me as a young boy as Reading Rainbow, Sesame Street, and Mister Roger's Neighborhood.

It was fascinating to watch him paint, and, strangely enough, watching someone draw can be incredibly boring, but he always made it fun to see a piece take shape.
T

It is impossible to feel negative emotions while watching Bob Ross.
S

I always thought it was amazing how he could finish a painting so quickly.
F

Lazy Man's Wallpaper said:
Can't tell you how many times I'd be all, "Yup, Bob just fucked it up for good there," then WHOA A MOUNTAIN
Click to expand...

Man, when I was a kid I would always go to my one friend's house down the block and his dad every once in awhile asked us to shut down the games for half an hour and he put on Bob Ross after work, as he was a hobby painter himself.

Me and my friend used to joke about Bob all the time, "happy little tree with happy little squirrel", but we watched along with his dad and I can't tell you how many times we'd say "Oh my god, what the hell is he doing?!?" And exactly like you said, BAM, mountain, or BOOM awesome tree!

Thanks for the thread OP, I'm gonna take a nap with an episode in the background
Z

I used to watch Joy of Painting all the time. It was a total bummer when an episode would come on and it would be a guest painter.
Ü

Hes amazing. Such a calm, soft voice. Makes me feel all warm and fuzzy.

Oh my god... he's always on shrooms, explains his laid back, mellow attitude and love for nature and colour... it's all coming together.
P

Lazy Man's Wallpaper said:
Can't tell you how many times I'd be all, "Yup, Bob just fucked it up for good there," then WHOA A MOUNTAIN

He would always paint some beautiful clouds and golden sky, and then smear a pound of black paint over what seemed like everything. My little childhood mind wanted a whole painting of clouds because I didn't understand balance.

He was truely a master at what he did regardless of whether his painting skill was high or low. Just keeping up with that filming schedule must have been exhausting. He always did it with a smile.