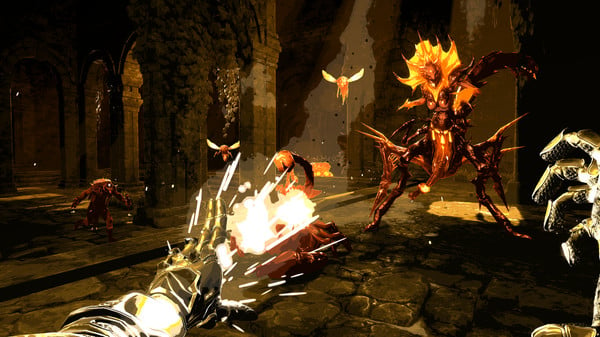 BPM: Bullets Per Minute for PS4, Xbox One launches this summer - Gematsu

BPM: Bullets Per Minute first launched for PC via Steam in September 2020.

“When BPM: Bullets Per Minute hit PC, the response we got blew us away, and we were aware that many gamers out there were keen for us to bring our particular brand of bang-bang-to-the-beats action to PlayStation and Xbox,” said Awe Interactive founder David Jones in a press release. “We always had plans to support consoles, but we felt like we should treat it as a brand new release, however, and as a result we looked for a partner to help us do these new platforms justice.”

Playtonic CEO Gavin Price added, “Signing a deal to publish a game made by a studio you’ve never physically met whilst simultaneously launching a publishing label might sound daunting for some, but here at Playtonic Friends, we saw it as a challenge to master one of the new normal’s routine tasks: Loudly and repeatedly informing each other that one or more of us had left our mics on mute during endless Zoom calls. It’s been a pleasure to come together with Awe Interactive and we’re genuinely excited to bring BPM: Bullets Per Minute to console gamers this summer.”

The console versions of BPM: Bullets Per Minute will ship with all of the additional content that has been added to the PC version post-launch, including five new characters, three new weapons, a new chapter with unique enemies, two new difficulty settings, and a mixture of new items, achievements, and tweaks.

Here is an overview of the game, via Awe Interactive:

About
BPM: Bullets Per Minute is a rhythm-action, first-person shooter, roguelike game where you must shoot, jump and dodge to the beat of an epic rock soundtrack. Delve into a randomly generated dungeon where one missed note can lead to your death. Gain game-changing abilities and loot powerful weaponry to defeat your ancient enemy: Nidhogg.
Fight as a mighty Valkyrie to repel the forces of the underworld from invading the world of Asgard.
Gameplay
In BPM: Bullets Per Minute, all of your actions and the actions of your enemies are tied to the beat of the music. Your enemies perform a dance-like sequence of attacks to an epic rock opera. BPM: Bullets Per Minute is inspired by retro shooters of the 90’s. It is fast, frenetic and rhythmical. You can double jump, dash, rocket jump and bunny hop to evade your opponents.
Your goal is to reach the end of randomly generated dungeons, collecting different weapons, abilities and items each time you play. These weapons and abilities can radically alter the way you play, making each playthrough unique.
You must defeat seven bosses to reach the final boss. Each boss moves and attacks in a unique way that you must learn to exploit if you want to succeed. Some attacks require you to jump over fields of lava, some to dodge fast projectiles, some to hold fast for a beat.
Key Features

As showcased during Day 2 of Guerrilla Collective 2021, watch this slick gameplay trailer, featuring giant mechs duking it out, for Wolfstride. In Wolfstride, an exiled ex-Yakuza, a rookie combat pilot, and a grizzled mechanic team up to compete in the Ultimate Mech Tournament. Use skills and weapons to defeat other mechs in turn-based tactical combat. Wolfstride is coming to Steam.
Click to expand...

If Croteam had made El Shaddai.

Releasing for the PS4 but enhanced to perform at 60 Frames a second in 4k on the PlayStation 5. We have the scope to provide a new trailer along with blog copy boosting about the performance on the PlayStation platform.
Click to expand...