Byleth joins the Smash team as the fifth DLC character on 28 January! 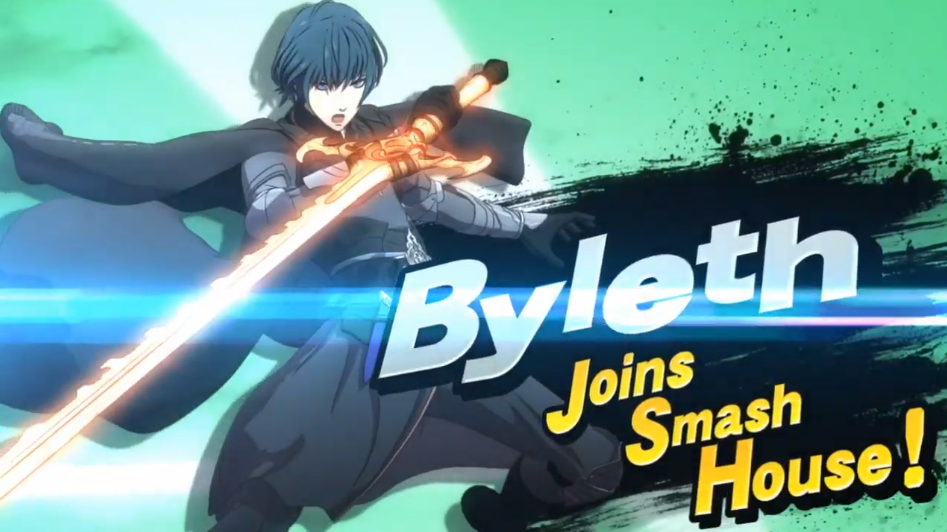 I'm surprised he of all peoples is in Smash. What do you think about him?
Reactions: DonF, MAtgS and Shaqazooloo

Feels a bit uninspired as an addition. Nintendo is just trying to move units of FE:3H with this, IMO.
Reactions: Tiamat2san and Shaqazooloo

I actually just tuned in halfway through the stream and saw two Marths. I was like huh, did the character get announced already? Then I looked closer, turns out it was Byleth...

Kinda weird that they're breaking their third party character streak with this. I think Byleth is an okay addition, but probably would've been better for the second DLC pack. I also hate sword characters with a passion. Why always swords? Get some axes and spears in there or something. It's FE after all.

Anyway, at the very least I'm glad it's not Dante or some other character I don't give a toss about. Terry was bad enough. At least I know who Byleth is, having actually played the game.
Reactions: rubenburgt

I'm glad they announced another Fighter Pass, haha. I don't feel like Byleth would be a good last character.

I dunno who that guy is but looks like another Fire Emblem character to me. When are we getting Joe Rogan in the roster?
Last edited: Thursday at 2:46 PM
Reactions: Shaqazooloo

Three Houses has an incredible OST so at least we get some awesome music with him
Reactions: chaseroni and Shaqazooloo

Smash has jumped the shark so hard.

what made it interesting in the first couple games is completely out the window nowadays.
Reactions: Holgren, Shaqazooloo and ROMhack

Not to be racist, but all FE characters look alike.
Reactions: Ryu Kaiba, Tiamat2san, ~Fake and 4 others

I had a feeling it might be a first party character with the lack of build up and the announcement being dumped in January but this is about as big of a letdown as they could have managed.
Last edited: Thursday at 3:20 PM
Reactions: jadedm17

Now why would they play Star Force music during the Battle Network section.

heckmanimation said:
Smash has jumped the shark so hard.

what made it interesting in the first couple games is completely out the window nowadays.
Click to expand...
Dunno if I agree but I know what you're saying. I like the game but it's become too much like other fighting games

Even the stage is underwhelming. We go from king of fighters awesome new wall mechanic to stage morphing around 4 different walk offs that most everybody hates.

Love it! Sakurai gave no fuqs at all, and here's a message to all the haters 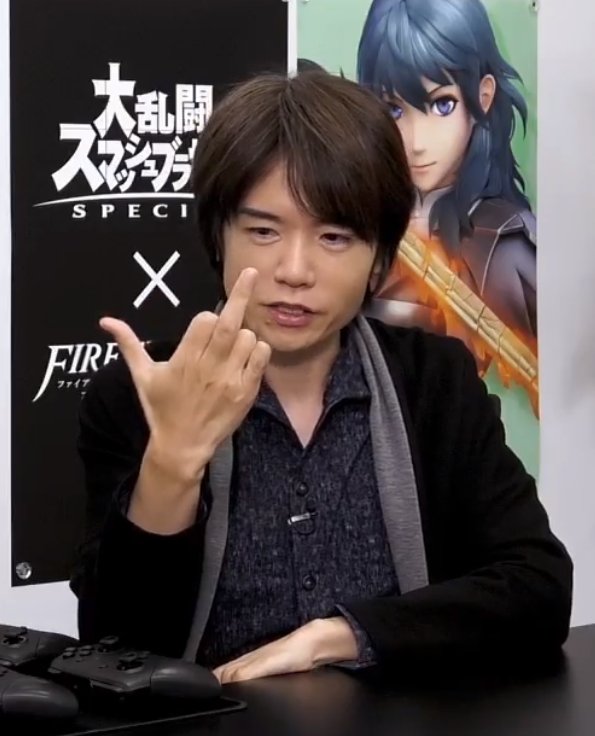 oh nice, always wanted a guy with a sword in smash
Reactions: anonychus, falcs, Ryu Kaiba and 6 others

Extremely disappointed. Not the way to end the first pack.
Reactions: MiyazakiHatesKojima

Am I crazy or do I remember Nintendo saying each character in the Fighters Pass was supposed to bring in a new IP?

Sakurai explaining what is Fire Emblem for the Smash Bros players is extra hilarious.
Reactions: Ryu Kaiba and Tiamat2san

Well that was anticlimactic.
Reactions: Zelent

Definitely not buying another Fighters Pass. I'll buy individual characters as they're released.

Everything would have been better than Dante, so I'm happy. Byleth was one of my predictions, too. And I'm glad fem Byleth has her sexy stockings.

6 more characters is awesome, too, and ofc I had to instantly do my updated predictions for Fighter Pass #2.

Fire Emblem needs to fuck off.

Sword Guy Seventeen? Come on. Someone just DMed me on FB and I said "Literally who?"
Reactions: Jarbloko, Shaqazooloo and iconmaster
P

Sword Guy Seventeen? Come on. Someone just DMed me on FB and I said "Literally who?"
Click to expand...
Yea they could have at least added some lance/dagger/axe character instead. The FE sword meme is absolutely real. Regardless, this is an awful pick, IMO. I'd have rather seen Geno, Shantae, Dante, or almost anyone else than another Fire Emblem sword.
Reactions: Shaqazooloo and Merzbear

2 years...a little long there when 6 characters came out in one year, but I guess the team is already on other projects....

Can Nintendo just put all these into a Smash spin-off?
Last edited: Thursday at 3:38 PM

This is probably one of the few characters that would get me to play the game again, thanks Sakurai!

;D
Click to expand...
I'm cool with all of that except Goku, please don't bring him into this. I've had enough of people begging for him to get in
Reactions: iconmaster
E

Mochilador said:
I dunno who that guy is but looks like another Fire Emblem character to me. When are we getting Joe Rogan in the roster?
Click to expand...
When he picks up a sword apparently.
Reactions: struggler_guts and iconmaster

Out of the Fighters Pass 5, the only characters we play are Joker and Terry. Should've just bought them individually, though I probably would've bought Banjo too just because.

Edit: I acknowledge that it's always nice to get more stages, though.
Last edited: Thursday at 3:49 PM

I'm cool with all of that except Goku, please don't bring him into this. I've had enough of people begging for him to get in
Click to expand...
- represents all anime games
- represents Bandai Namco
- has been in more games than most Smash Fighter
- Goku is *the* ultimate fighter. It makes sense for him to want to fight the strongest game heroes.

Nobody knows, but imo there's a lot that'd made sense to have him in Smash. Public reaction would be mega hype imo.
Reactions: chaseroni, iconmaster and Shaqazooloo
H

Smash fans being salty, why i'm not surprised?

We've got characters in this season pass you'd have never expected, out of 5 characters of the first pass, Nintendo only got 1, let them have it!

They were even too generous with the previous picks when you think about it: Nintendo got nothing from promoting Banjo that way for Microsoft, commercially speaking that move was kinda dumb, but they made it due to fans demand.

It's like we have now almost 100 characters in a fighting game, that is the largest roster ever and no fighting game would beat that anytime soon cause balancing such a large roster is a nightmare, and yet fans are not happy lol
Last edited: Thursday at 3:55 PM
Reactions: FloatingIslands, Saruhashi, cryptoadam and 2 others

Byleth having multiple weapons is pretty great and different than the other FE chars at least
Reactions: Shaqazooloo

All that DMC hype for another FE character?

2. Can someone explain why hoes mad

Shouta said:
Byleth having multiple weapons is pretty great and different than the other FE chars at least
Click to expand...
I agree. It's what saves him. Honestly, the issue isn't the sword but rather that we have four characters that quite literally all play the same as they are based on Marth. If it weren't for that, the perception wouldn't be as negative.
Reactions: iconmaster and Shouta

It's a bit underwhelming for me with both character and the stage!

This is the first Fire Emblem character in the game I actually care about. Haven't been able to get into the series until Three Houses.
Reactions: Shaqazooloo

H@3@ld23 said:
out of 5 characters of the first pass, Nintendo only got 1, let them have it!
Click to expand...
Saving YAFES (Yet Another Fire Emblem Swordie) for the final hurrah was a bad play. Should have stuck this Marth clone somewhere in the middle.
H

iconmaster said:
Saving YAFES (Yet Another Fire Emblem Swordie) for the final hurrah was a bad play. Should have stuck this Marth clone somewhere in the middle.
Click to expand...
It was a super low key announcement though, not as the final announcement of a Direct or at E3.

So i feel like Smash fans would have been mad regardless of where you put it cause they always come up with some nonsense dream character like Grinch or Goku.
Reactions: Shaqazooloo

As I said in the other thread I think this was hardly the original plan. When they decided on the next pack they obviously held some content back I'd say.

I love Fire Emblem: three houses but I'm seriously not excited for this.

Is anyone? It's clear that this is filler content. You could almost make this a marth skin to be honest.
Last edited: Thursday at 4:22 PM
Reactions: Shaqazooloo and iconmaster

the Fire Emblem characters are so unbelievably boring... WHY?...

iconmaster said:
Saving YAFES (Yet Another Fire Emblem Swordie) for the final hurrah was a bad play. Should have stuck this Marth clone somewhere in the middle.
Click to expand...
Should have been a bonus for the Second character pass sort of like The Pirahna Plant.
Reactions: Shaqazooloo and iconmaster

Did they say if we get stages with pass 2?
Reactions: iconmaster

Sp3eD said:
Did they say if we get stages with pass 2?
Click to expand...
I think it's not explicitly said but Challenger Packs always have been a character, a stage and music so it's really safe to say that we will.
R

This whole stream was next tier Sakurai trolling:

“Nobody, not even Nintendo will expect what character is about to be announced.”