Capcom and Dontnod entertainment are proud to announce Remember Me, a brand new action adventure title for Xbox 360, PS3 and PC.

Neo-Paris, 2084. Take on the role of Nilin, a former elite memory hunter with the ability to break into people's minds and steal or even alter their memories. Arrested, and with her memory wiped clean Nilin must now set out on a mission to rediscover her identity.

Watch your local trailer at http://smarturl.it/remembermegame

Nilin escapes; it's a third-person action adventure with Uncharted-style climbing sequences. The heads-up display is empty aside from elements in the environment and Nilin's status, which is represented as an orb behind her head.

The chase continues, with music that swaps between serene and techno. Now inside the building and away from the chopper, she has to fight goons in a corridor. It's a hand-to-hand brawler by the looks of things, and there's a particularly effective move called Memory Overload, which seems to kill the enemy by spraying their memories everywhere.


More combat is soon shown, with a wheel of commands and tools at her disposal. She's also able to slow time to quickly dispatch her enemies.

Back on the rooftop and the gunship in tow, Nilin manages to evade detection for a moment, climbs up the side and lands on the gunship itself, and steals the pilot's memories. The demo ends. It looks very impressive.


While all people in the world now have powers, Nilin has a unique one, Memory Remix, which can make people insane and kill themselves. A new demo starts, showing Nilin hunting down a general named Frank Forlan.

The player can use various sight modes to make her way through the rainy streets and past sentries. She soon climbs up buildings and hangs outside of a window, with Forlan inside the room.


She overhears how he just broke up with his girlfriend. Using this information, she's able to access these memories - a messy domestic in his apartment - and edit them. In the apartment, the player can select various elements - such a knocking over a bottle to opening a suitcase.

Knocking over the bottle doesn't work - Forlan just stumbles and fails to shoot his girlfiend. You can replay, take the safety off the gun first then shoot him, successfully editing the memory.
Click to expand... only thing it needs is a question mark at the end

this is the game crazy train leaked in gif I think.
E

Subtitle: As I Was Before This Console Generation

The trailer isn't half bad. Excitement level won't rise above tentative though, because, well, Capcom.
H 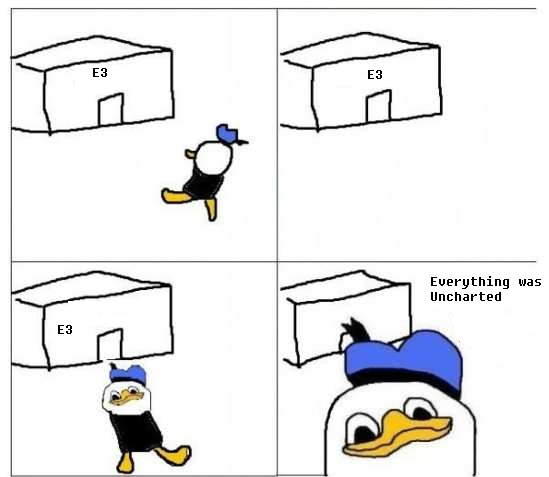 seriously this looks more like a mix of uncharted and beyond good and evil.

This game was designed to appeal to me. I like it. Actually I'm somewhat hyped.

The buttocks, they teased this at E3.
E

only thing it needs is a question mark at the end

Click to expand...
Came in looking for this - GAF never disappoint.
B

Click to expand...
first thing that pop in my head
U

Yamibito said:
The buttocks, they teased this at E3.
Click to expand...
Oh so it was that one huh ?
N

This looks familiar.
B

I love the visual design and aesthetics, I hope it plays as smoothly as it looks in the trailer.

But what is it with Capcom and shitty VA?

endresults said:
Subtitle: As I Was Before This Console Generation
Click to expand...
.
D

Nonoriri said:
This looks familiar.
Click to expand...
I think it's a videogame.
P

Wasn't this called Adrift at one point?
S

miladesn said:
this is the game crazy train leaked in gif I think.
Click to expand...
Yep, looks like it.
R

"I'm the hunter. Why am I being hunted?"

Hmmm... looks cool. I like the focus on Melee combat. And what a good, gameplay-focused first look, not just a CG tease or such.

Looks interesting. Keeping an eye on this.
D

Looks interesting, but I'm hoping it's not too scripted/cinematic.
K

Pranay_ said:
Oh so it was that one huh ?
Click to expand...
One of the shots in it is definitely from the gif he posted.
K

Oh, so this was that thing from the crazy buttocks thread.

Reminds me of aeon flux or somethin. Looks ok I guess.
E

Minority Report?
Looks like it's going to sell 10 copies.
T

derFeef said:
I think it's a videogame.
Click to expand...
Sounds legit.
T

That is some awful dialogue.
S

So is this CBoaT's game that he leaked during E3? The one with the gif of all the QTE prompts?
U

The M.O.B said:
That is some awful dialogue.
Click to expand...
are you familiar with Capcom
P

Heh, guess they did find a publisher and reworked it.
I

How can you ask us to remember you when you forget Wii U?

Will it end with the reveal that her mission was to commit future 9/11?
I

Combat looks like its taken from Batman Arkham City
H

Reminds me of the new total recall trailer.
X

Cartman86 said:
Will it end with the reveal that her mission was to commit future 9/11?
Click to expand...
EMOTIONS
G

Terrible to say the least, and look at that another game not for Wii U, the only franchises I care for in capcom are the fighting franchises and this blows.
P