Casio Loopy thread of GREATEST CONSOLE IN THE HISTORY OF THE OMNIVERSE.

Today I'd like to preach to you about the greatest goddamn console in mankind's history. It's not the Neo Geo, it's not the Saturn, it's not any one of those Neentoinduh systems. It's the:

I mean look at this shit: Can YOUR PS4 make you stickers from any game or DVD? I thought not.
But you may be crying: "What about the vedya gams? I want Veedyo gems, not stickers!" Well buddy, that's covered in spades with the Casio Loopy.

Now, think of your favourite animes. Like the schoolgirl that's the moon queen or the fighting monkey aliens or the androids with religious symbolism. Have you ever wondered: Where do all those animes live? Well, duh! They live in ANIMELAAAAAANNNNNNDDDDD! Lands are pretty big, aren't they? Now just imagine one JUST FOR ANIMES. Blows your mind, doesn't it?

If you want something more however, (But how could you with the awesomness of Animeland) you could also go for the epicness of Bow Wow Puppy Love Story. The intertubes loves cats, right? Well dogs are like cats except not at all. So with this you can play with your not cats while a mustachioed clock talks to you. If that is not the American dream, I don't know what is.

Do we have any school goes in the audience tonight? Don't you wish that school was more... COMICAL? Well through the power of interactive fictional entertainment devices, you have Little Romance. Look, the little man is getting electrocuted! Possibly fatal physical harm is so comical, if the Looney Melodies gang have taught me anything. Plus it has a piece by Beethoven. This game's classy as fuuuuuuuuuuuuuuuuuuuuuuuuccccckkk.

Or maybe you want to have a party. Parties are fun. Parties are cool. Parties also need a video juego equivalent.Dream Change: Kokin-Chan's Fashion party is the savior of party videospiels. You can even change your dreams here! Better change it so that the red sweater man doesn't get you. Ha Ha, that was a funny "A Halloween on 13th Street" reference.
And that's just the start! With such other titles like Caricature Artist, I Want a Room In Loopy Town, and PC Collection, you'll be locked in your house for eons. I hope now you see the greatness of the cultural touchstone known to us mortals as the Casio Loopy.


Yeah, the system is crap, but I miss the days in which random companies could put out consoles with like 10 games and expect their systems to sell out. It's a feeling that we'll never get again, even with the *insert hated Next Gen system here*. A shame, too. I wanted to see the RCA UltraBlast.

And yes, this is a bit of a parody thread. Sorry to the both of you that wanted to seriously discuss the Casio Loopy
L

woah look at that

to be honest the sticker printer is pretty dumb but the actual print is far better quality than i expected.

we will soon get a fucking madcatz console, so these kind of thing may not be over just yet, plus the ouya thing too
A

lord said:
woah look at that

to be honest the sticker printer is pretty dumb but the actual print is far better quality than i expected.

we will soon get a fucking madcatz console, so these kind of thing may not be over just yet, plus the ouya thing too
Click to expand...

The video is awful and has a poor sense of humor, but the device itself is cool as hell. I want a sticker-printer for the SNES. Or hell, for the NES. Seems like it'd be neat and useful for showing that you beat the game by printing out the last scene.
T

Silly me, I forgot to bestow a glimpse of perfection's visage to those not initiated.

superdeadite has the goofiest things
P

That shit looks too future.
I want one.
S

Toad.T said:
Silly me, I forgot to bestow a glimpse of perfection's visage to those not initiated.

Such a cute looking console.
P

Not anymore, son. The Internet only loves Doge now.
N

There is no legitimate reason why consoles can't have printers these days. It's a standout feature that has been lost to all the shallow mod-cons of today's gaming.

wow I thought I knew about every obscure console out there..
U

Toad.T said:
Silly me, I forgot to bestow a glimpse of perfection's visage to those not initiated.

Honestly I like it a lot more than the latest console designs. It actually looks like a game console.
T

yoooooooooooo a whole LAND of anime?
damn now you're talking my fucking langu-AW SHIT WE GOT STICKERS 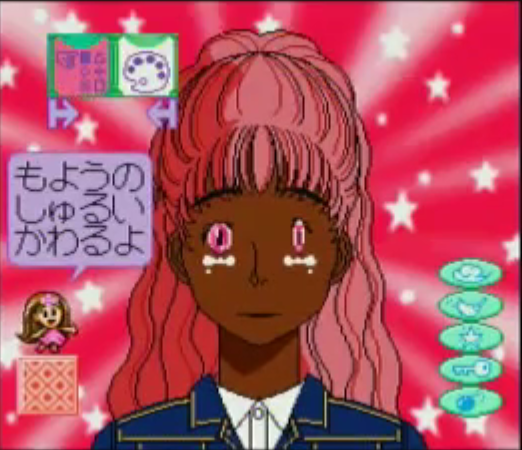 nope nope i want to get out of animeland
D

Well I was certainly surprised to see the Alfa System logo at the start of the puppy game.
B

NewGame said:
There is no legitimate reason why consoles can't have printers these days. It's a standout feature that has been lost to all the shallow mod-cons of today's gaming.
Click to expand...

Not exactly what you wanted, but the PS3 has a printer option and PS2 can be connected to a printer to print gran turismo 4 photos.
T

Yo, mah Loopers! I got some more info on the games that saw the truth in Casio's gift to mankind.

Like you know that "I Want A Room In Loopy Town" title I was talking about? The guy that wrote those early Squaresoft RPG titles (Whazit called? Final Quest? Dragon Fantasy?) made this game as well. Give it up for my main man, KENJI TERADA! It's better than those Final Dragon games as well, because you get to MAKE YOUR OWN ROOM OH MY FUCK.

You've got those new consoles that CLAIM they do everything, but do they offer word processors? How about Astrology readings? How about all that PLUS MINIGAMES? You could do that in PC Collection. Finally, the PC Master Race and the Console Master Race can do mating dances together and make little baby vediyo geams. You need more proof of the title's awesomeness-sauce? Check out this vine.

I wasn't able to find info on caricature artist, but I bring you info about THREE NEW TITLES. HARIHARI Seal Paradise, Chakurakun no Omajinai Paradise and Lupiton no Wonder Pallete. There's just too much to say about these titles, so i'll just lead you over to over here. This is where I got my new info from as well.

Catch ya on the Loop side!


There's only 11 titles released for this thing. Seriously? Mind you, in theory a console just for girls is a good idea, but most of the titles aren't really games at all. Plus there's the whole can of worms regarding female stereotypes and not giving girls a chance to experience the same games as boys. I guess if anything, the system is just a historical curiosity and should be treated as such.

I do love these blips on the industries' radar, however. There's just something neat about having your own set of games exclusive on a single console without any overlap of games (As in, the Ouya/Madcatz devices mentioned earlier all use Android OS's/Software.) It just feels like you're attempting to break into a vast kingdom all by yourself.
C

Gotta give them props for using A B C D instead of jumping from A B to random X Y like the others.
You must log in or register to reply here.