All it took was a single sample of frozen Siberian soil for an international collaboration of researchers to discover, and revive, a new type of "giant virus"  a virus whose unusually large size means scientists can spot it through a light microscope.

Indeed, despite being frozen for over 30,000 years, Pithovirus sibericum still packs a punch: a simple thawing procedure allowed it to infect a throng of unsuspecting single-cell organisms for the first time in thousands of years. And given that climate change is already causing the ground to thaw in regions such as the Arctic and parts of Alaska, scientists fear that this lab experiment could eventually take to the field, leading to the spontaneous revival of ancient and unknown viruses.

The discovery puts the concept of "viral disease eradication" in a bit of a jam, says Jean-Michel Claverie, lead author of the study and evolutionary biologist at Aix-Marseille University, because it means that there could be a slew of "eradicated" viruses  viruses such as smallpox, which caused its last infection in 1977, and the livestock disease rinderpest  laying dormant deep within the Earth's oldest frozen soil layers. "We might be able to eradicate viruses from the surface of the planet," the researcher says, "but that doesn't mean that there isn't a single particle of that virus still alive somewhere."

Claverie helped describe the first ever giant virus, dubbed Mimivirus, in 2003. Prior to the finding, scientists and physicians mistook these massive viruses for bacteria or fungi. Yet today's Pithovirus discovery, published in Proceedings of the National Academy of Sciences, stands out from previous findings because Claverie's team was able to demonstrate that warm temperatures can prompt ancient frozen "giants" to reactivate and infect anew. The researchers also think that the Pithovirus is the oldest DNA virus revived to date.

To uncover the virus, Russian scientists first had to extract a sample of permafrost buried 30 meters below the surface in northeast Siberia. The sample was then sent to Claverie's lab, in France, where researchers thawed it and introduced it to a culture of amoeba cells. After about a day, the researchers checked the sample and found that the amoebas had died. Because the medium was also treated with antibiotics, they knew the mass die-off couldn't be attributed to bacteria or fungi: a virus had to be the culprit.

Given its size and uncharacteristic shape, Claverie's team soon realized that they had discovered a new family of giant virus. Fortunately, further tests revealed that Pithovirus isn't dangerous to human health. But that might not always be the case with future permafrost discoveries, Claverie cautions.

Now that scientists have demonstrated that this type of virus reactivation is possible, describing other "giants" won't be nearly as time consuming, says evolutionary biologist and study co-author Chantal Abergel, also at Aix-Marseille University. "Just by retrieving the DNA, we can get a catalog of what is [in the permafrost] without reviving them." Such a catalog should provide advanced warning of any possible pathogens lurking belowground.

But documenting all the frozen viruses that might populate the Siberian soil won't be an easy task. "The regions of the Earth where viruses occur or that are affected by viruses, appear to extend to wherever life is found," says Curtis Suttle, a microbiologist at the University of British Columbia who did not participate in the study, "and permafrost is a rich source of microbial life."

Moreover, Siberia's frozen soil probably isn't the Earth's only source of undiscovered viruses. According to Claverie, other giant viruses might also lay dormant in the ocean's deepest sediment, which is cold enough to conserve their DNA and infectious properties. "There's no oxygen and no light down there," he says, "so it might be possible to find very interesting new beasts."

But hypothetical viruses embedded in the ocean's floor shouldn't make us nearly as nervous as the actual ones that await in the permafrost, Claverie says. As climate change progresses, increased temperatures are likely to cause their return. "This might be the Gulag's revenge," the researcher says. "Many of those people died from disease and they weren't buried very deep."

Claverie thinks that humanity might have no choice but to face old foes as the ice melts and bodies thaw. "All those things that killed people 50100 years ago could come back." Suttle, however, is skeptical. Climate change itself, he says, poses a much bigger threat. "I would be much more concerned about the hundreds of millions of people that will be displaced by rising sea levels," he says, "than the risk of being exposed to pathogens from melting permafrost."

For now, the search for new sources of energy in the northernmost reaches of the planet should be enough to prompt extra vigilance, Claverie says. Drilling and mining in those areas could cause some diseases considered eradicated by the World Health Organization to come into contact with workers, so implementing quarantine protocols at these sites will be crucial. "You wouldn't want one of these viruses to infect a miner and end up in London or New York," he says. "And if I was a miner working in Siberia, I would try to get vaccinated against smallpox."
Click to expand...

so it's like an ancient evil that awakens....
but seriously, if such a thing does happen hopefully it(the potential viruses) don't travel far.
G

The Thing was a documentary
E

evil solrac v3.0 said:
so it's like an ancient evil that awakens....
but seriously, if such a thing does happen hopefully it(the potential viruses) don't travel far.
Click to expand...

I really hope such a thing doesn't happen and if so, they could be treated/cured properly.

Maybe a nice virus will wake up instead.
W

Thanks, GOP. We are already dead.
J

PJV3 said:
Maybe a nice virus will wake up instead.
Click to expand...

Calling these things giant viruses scares the shit out of me.
J

Big-E said:
Calling these things giant viruses scares the shit out of me.
Click to expand...

how about cutie pie viruses

Jenga said:
okay like so what if it's a virus that gives you superpowers

I'd settle for that or a bigger willy.
P

There's an X-files episode similar to this...

Going to make a movie about this.

It will win all the awards except for Best Picture.
N

By "giant", do they mean it is like a mimivirus? If so... that's not expressly a bad thing. Start modifying that shit for retroviral therapy, son.
R

Another story on how we're all fucked?

For real though, this is extremely interesting and disturbing...like most of science.
C

I should have believed...

Giant viruses? That means that maybe we'll be able to actually work on them; retrofit them to cure diseases, rather than cause them...

In other words business as usual for the way the ol' Earth works.

But I guess I am not a science headline scaremonger.

I hope they're keeping a safe watch on the samples at the lab... 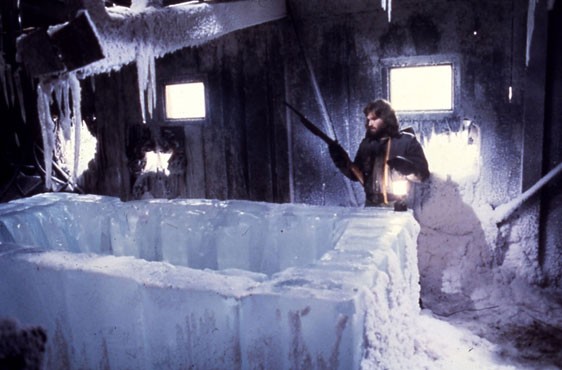 Another thing is if the permafrost melt a lot of methane is released and the positive feedback faster the melting process...
Other problem is the bugs and animals that before wouldn't live in such cold environment find a new home... so we have new carrier for such virus and it will spread easily... oh joy!
P

All it took was a single sample of frozen Siberian soil for an international collaboration of researchers to discover, and revive, a new type of "giant virus"
Click to expand...

Good job researchers! You revive that virus!
B

Jenga said:
how about cutie pie viruses
Click to expand...

My Little Virus Can't be this Cute
F

Big-E said:
Calling these things giant viruses scares the shit out of me.
Click to expand...

I imagined a school bus sized virus that doesn't infect you. it eats you alive

How can the virus live if it's frozen? Wouldn't that kill it? This is some white walker shit.
T


Full Recovery said:
How can the virus live if it's frozen? Wouldn't that kill it? This is some white walker shit.
Click to expand...

Bah, that's nothing. There are multicellular organisms that can freeze over and survive for extended periods of time.
J

Just remember: if you drive a car, or fly, or use energy from dirty sources (which is most of them), you're guilty of killing us all. Oh and also if you exhale after a breath.

jb1234 said:
Just remember: if you drive a car, or fly, or use energy from dirty sources (which is most of them), you're guilty of killing us all. Oh and also if you exhale after a breath.
Click to expand...

"This might be the Gulag's revenge," the researcher says. "Many of those people died from disease and they weren't buried very deep."
Click to expand...

so if you're a young earther and climate change denier, you're in the clear?
T

terrisus said:
And if you do any of those things you're also much more likely to die as a direct result of them (especially a car crash)
Click to expand...

Dude, you're speaking to the car crash king here.
I

Full Recovery said:
How can the virus live if it's frozen? Wouldn't that kill it? This is some white walker shit.
Click to expand...