Arcade Heroes has the details: 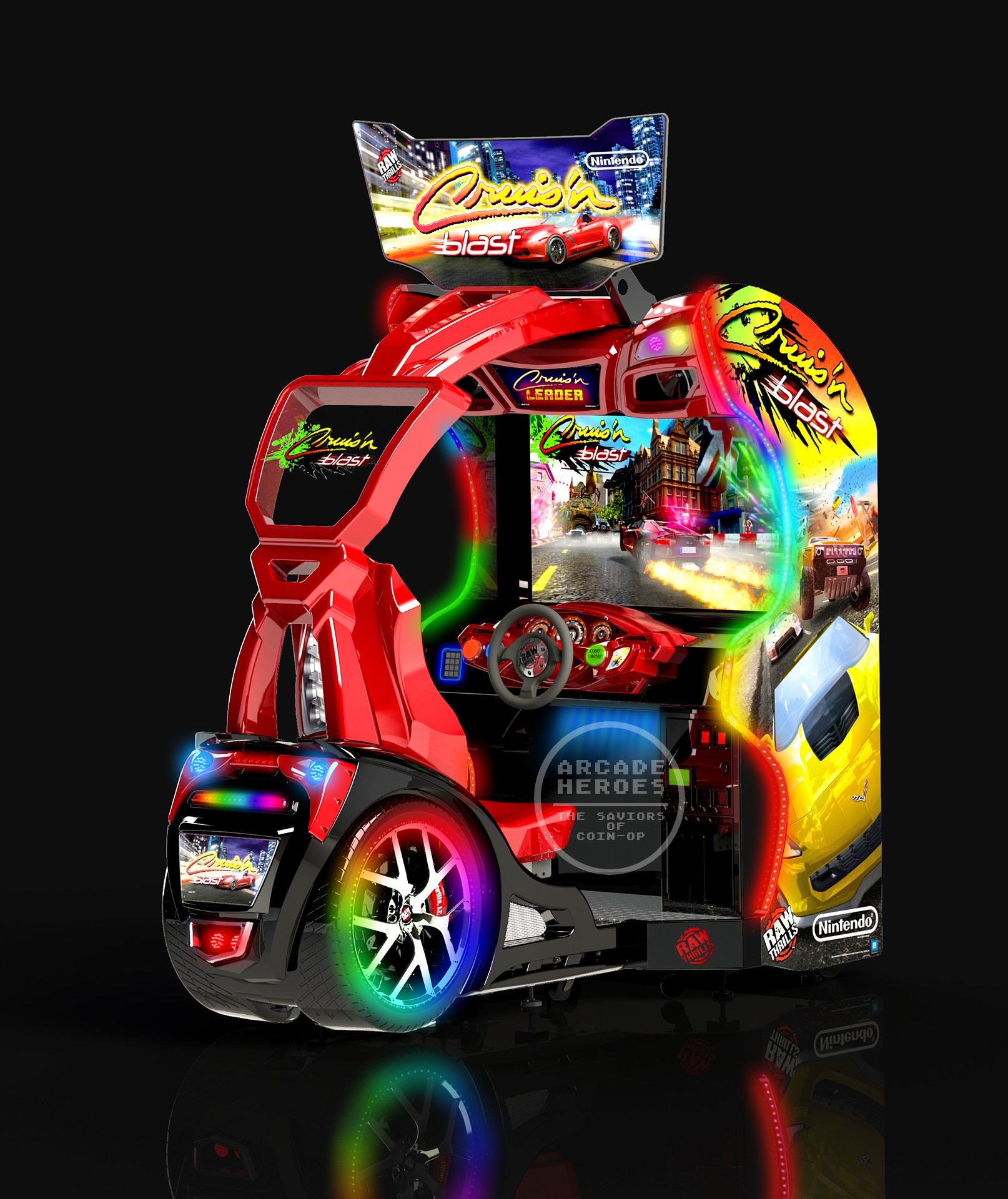 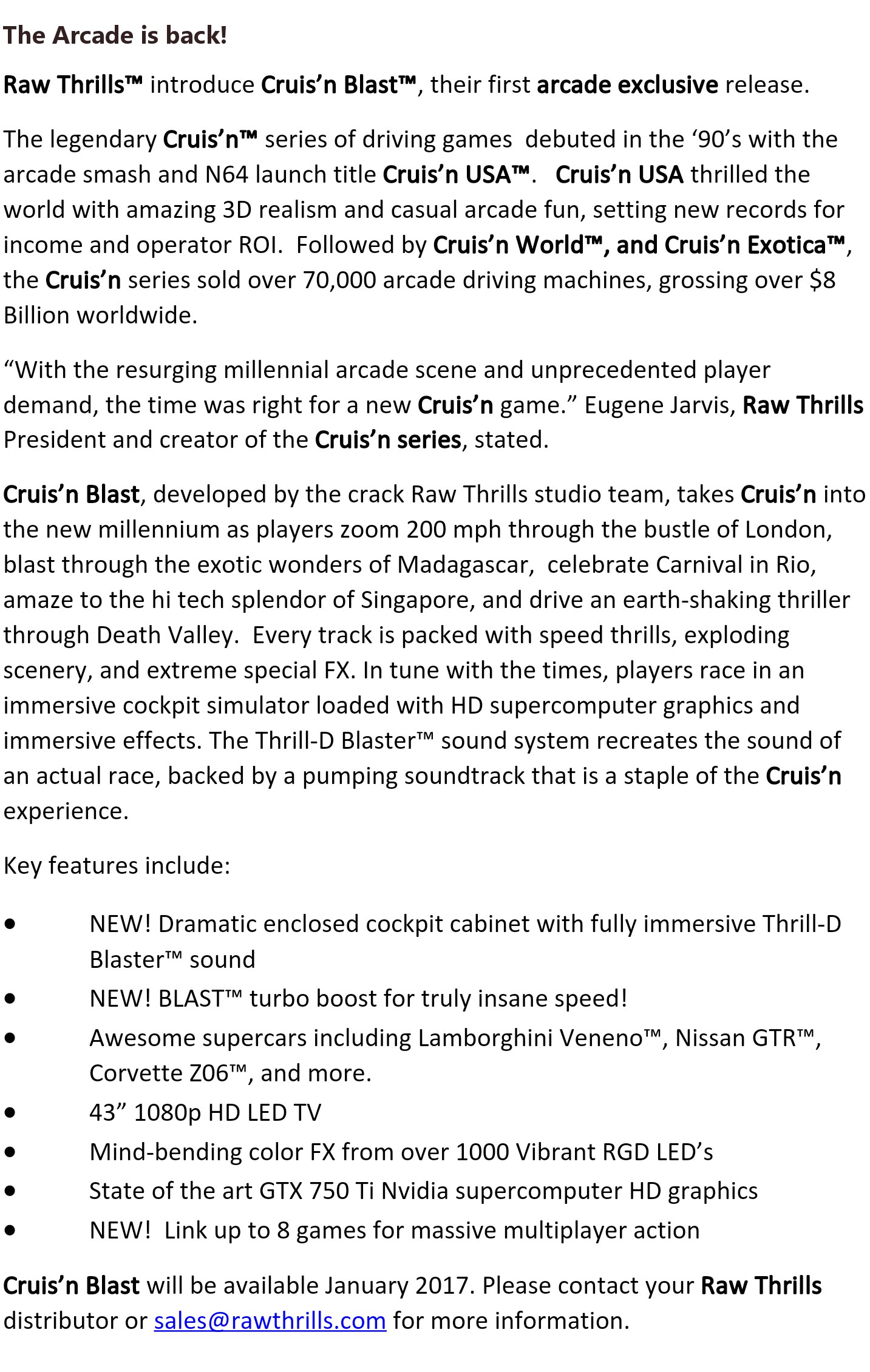 The Arcade is back!

"With the resurging millennial arcade sense and unprecedented player demand, the time was right for a new Cruis'n game." Eugene Jarvis, Raw Thrills President and creator of the Cruis'n series, stated.

Cruis'n Blast, developed by the crack Raw Thrills studio team, takes Cruis'n into the new millennium as players zoon 200 mph through the bustle of London, blast through the exotic wonders of Madagascar, celebrate Carnival in Rio, amaze to the hi tech splendor of Singapore, and drive an earth-shaking thriller through Death Valley. Every track is packed with speed thrills, exploding scenery, and extreme special FX. In tune with the times, players race in an immersive cockpit simulator loaded with HD supercomputer graphics and immersive effects. The Thrill-D Blaster&#8482; sound system recreates the sound of an actual race, backed by a pumping soundtrack that is a staple of the Cruis'n experience.


Cruis'n Blast will be available January 2017. Please contact your Raw Thrills distributor or sales(at)rawthrills(dot)com for more information.
Click to expand...

What's concerning is the line saying "arcade exclusive", I sure hope that's not the case.

Here's the footage from a few months ago when it was known as Cruis'n Red Line:

Funny thing is though it runs on Nvidia GTX 750 Ti. Not sure how that compares to NX's rumored Tegra chips.
E

Am I reading this correctly? An arcade exclusive in 2017?
M

another F-Zero arcade would have been better
H

Here, I'll transcribe the PR above for those who can't see the image.
P

The graphics are .... kinda retro
S

Is this the NX?! Oh shit are arcades making a comeback in the west?!
and the waiting continues...
G

I wonder if it will come to NX
C

I don't think a Raw Thrills game has ever been ported to console.
N

That boost looks like a shitload of fun.
J

Not shocking that it runs a 750Ti. Most arcade boards nowadays either go midrange or cutdown versions of the high range.

Sega's current arcade platform runs on GTX 650 Tis, Taitos is like a Radeon 67xx card or something, Namco likely uses something in a similar power range.
T

Transcribed PR is in the OP.
U

Unless Nintendo want's to kill the arcade scene in North America, they should wait until February to talk about the NX and give this game some space.

Gavin Darklighter said:
I wonder if it will come to NX
Click to expand...

if it's like every other Raw Thrills game you won't want it to.
H

750TI supercomputer graphics. Who told them this?
S

How much would something like this cost? Surely not $10,000
F

The cpu must be something like a quad core atom if they consider a 750 ti something special but dont list it.
B

Herne said:
750TI supercomputer graphics. Who told them this?
Click to expand...

I'd guess nintendo because compared to whats in the nx it is.
N

750ti is state of the art? Maybe for Nintendo.
M

Crimsonclaw111 said:
750ti is state of the art? Maybe for Nintendo.
Click to expand...

I'll hope somehow it would be released to the NX (in the end).
C

Hoped to see this game on any arcade near me lol.^~^
P

Fire the absolute fucking moron that didn't realize this needed to be called Cruis'n 4:
A Bruis'n
G

How much does the cabinet cost?
K

I love the series, looks awesome! Hoping for an NX port. Maybe we should start a petition for it once the NX is actually out! I miss arcade racers ;-(
P

Gaogaogao said:
imagine if someone wanted to make an arcade game with a titan x
Click to expand...

They would over complicate.
S

CO_Andy said:
I don't think a Raw Thrills game has ever been ported to console.
Click to expand...

A couple did on Wii (badly ported) but yeah Raw Thrills care for arcade so there is little reason to port the games to consoles (at least quickly).
V

They should be making another San Francisco Rush instead. There's never been another Arcade racer with big jumps and leap since the Rush series.
C

v1oz said:
They should be making another San Francisco Rush instead. There's never been another Arcade racer with big jumps and leap since the Rush series.
Click to expand...

Excite Truck for Wii is probably the closest.
C

My local Dave and Busters gets new machines all the time. Hopefully I can try this out.
C

v1oz said:
They should be making another San Francisco Rush instead. There's never been another Arcade racer with big jumps and leap since the Rush series.
Click to expand...

You should give Trackmania a try if you haven't.
S

man, we never had arcades in germany in the 90s
S

So they ditched the trading card thing.
H

I kinda like it. Its shallow as hell, and ugly even by the standards of first gen Wii games, but its also a competent and stripped down arcade racer. It even controls well enough using a wheel. I wouldn't rank it that highly in the history of arcade-style racers, but since its release its part of a pretty small sub-genre, and just being good was good enough for me.

I'd buy this if it ever got a home port, which it likely won't (if their Batman game won't come home, nothing else would).
R

Ah yes, look at those hip youffs enjoying a legendary game series.
B

Cruis'n USA was an average game at best, I can't believe that. At all.
S

Contributing to that $8billion.
L

that looks like a lot of fun. unfortunately i live miles away from any place that would bother buying arcade games anymore.

still, i can't help but love anyone making cabinets these days. i hope it does well.
J

While the 750 Ti is... rather the cheap option to go with, it is interesting that they're highlighting the use of Nvidia hardware, given the speculation around NX.
You must log in or register to reply here.