Darth Zandatsu said:
So... apparently someone discovered the descriptions of all armor, items,miracles and sorceries in the beta as well some dialogue, click at your own risk

Regarding PVE -
PVE - I will try and stay away from what was already said, you can take my word for it that everything said about the game so far is on point. Interaction with the enemies is good but the new heavier (Slightly delayed) feeling to the attacks and rolls takes time to get used to in comparison to both souls games before it unless your a duel swordsman in which the speed feels right at home. Targeting is odd with some spells but it might be intentional as some blasted an aoe off target but still hit. Same with weapons, heavy weapons are the same (Mostly, I will explain later) slow but strong and fast weapons are fast with less dmg. Spamming attacks with a slower weapon (Halberd) doesn't seem great since the weapon targets the last area you were facing even when an enemy moves around you, might be changed at the end or kept this way.

Regarding items -
Items &#8211; some consumables have new animations like humanity. Flasks are slower to heal while enemies are more aggressive. Confirmed magic item grass that recharges the spell casts count completely.

Regarding STR -
I did not get to test the STR stat heavily or see any rapid changes at the moment although while invading a host did hit me with a LARGE sword attack that knocked me into the air but luckily he was stunned by an enemy before it fully connected causing little dmg but it was relatively quick for such a large weapon. There was an invader who was wielding a new Zwei aand even some of his attacks were much faster so I think its fare to say they sped up STR weapons considerably with some attacks.

Regarding PVP &#8211;
Helpers and Invaders can both use Flasks :shock: I did not get to try my healing items but most likely those as well.

Invaders have less HP maybe 75% or a bit more when invading. Not sure about whites, no one summoned me.

As an invader you cannot manipulate the environment levers anymore or attack enemies as usual but you can use bonfires to light your own torch in there world which may offer other possibilities for the bonfire but that is my speculation.

Invasion and summons as of now do not make a sound when entering your world but do give a screen warning as usual.

Invading from one spot in my world allowed me to invade in 3 different locations in the hosts world possibly putting invaders closer to the host now but 2 out of the 5 invasions I had did place me in the same locations, no random spawn spots.

Invaders and helpers have a timer confirmed as a small hour glass icon that&#8217;s barely visible. Most hosts died before I could test the timer.

PvP felt the same just slower and heavier, I did get a "Lag stab on a guy without even trying. It is WAY more difficult or at least different to backstab now and no where near what it used to be BUT it seems that faster characters may have an easier time doing so or at least characters with speed, (Agility?) Dying as an invader (at least killing yourself) does not remove humanity, when you return to your world you will be at full hp and human.
Click to expand... 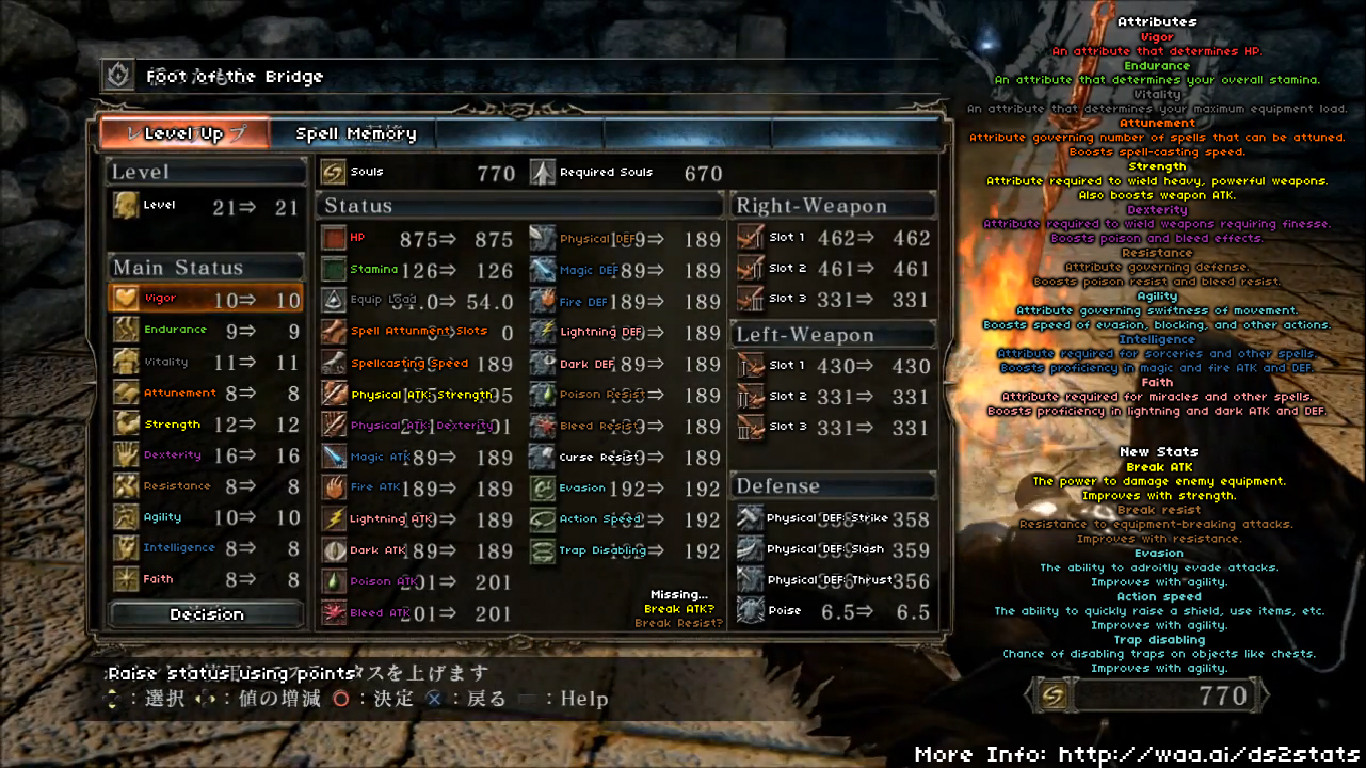 General
Movement speed is increased.
Sprinting speed is now close to charging speed.
Estus restoration is now slower than Dark Souls I.
Action speed is dependent on Agility (More explained in the stats section).
Getting hit with plated armor makes a "clank" sound rather than a fleshy sound.
Humanity is now replaced with "Human Effigies".
Bonfire is no longer needed to turn human, just Human Effigies to turn human instantly.
Human Effigies don't restore health.
Healing stones are a new healing item.
Healing stones can be used when moving, but restoration speed (and/or amount) is dependent on stone type.
Three items in each hand.
Hollowed players can now get invaded.
Dedicated servers for better connections.
Enemies are more tenacious.
Enemies ambush around items.
Enemies switch from ranged to melee frequently.
More types of soapstones (Or different styles of soapstones).
Ranged weapons can be used while moving.
The more times died while hollow, the more your base health is reduced, similar to curse (Restored once humanity is restored).
Many previous sets from Dark Souls I will make an appearance in Dark Souls II.
Rings and arrows will give burden instead of being weightless, different from Dark Souls I.

Covenants
Darkwraiths are now called the "Brotherhood of Blood".
New covenant "Way of the Blue" (Not official name) has players assist other invaded players.
Gravelording is still a possibility.

Animations
Many new realistic and fast animations with the help from MOCAP.
New emotes.
Players show fatigue when low on stamina.
Tumbling when the player falls from certain distances.
Different backstabs for different weapons.

UI
Summoned Phantom's health can now be monitored at the side of the screen.
Humanity counter now replaced with an icon (Rumored to be covenant icon?).
A heading appears at the top of the screen at times (Game news?).
More minimalist hud, item circle in lower left minimizes when not in use, entire hud disappears when not in use. Status effect icons are still visible.
Using gestures doesn't take you out of the gesture screen.
Gesture screen enlarged.
Bonfire screen zooms in on character.

Inventory
New inventory screen.
More in depth weapon categories (Straight swords, sabers, rapiers, polearms, etc).
Total of 40 items shown on each page with a description at the bottom.
Inventory screen zooms in on your character on the right.
Items can be used on the inventory screen without exiting.

Graphics
New lighting system that gives an even more realistic look.
More detailed faces and bodies.
Beards are included.
Cloth physics that react to the world.
Lighting Bonfires create an aura that lights up the room.
Click to expand...

I like that the title screen is similar to Dark Souls 1, love that look.


Graphically it looks like a major improvement as well, really excited for this game!!!!!
V

It does look really good. Animations look improved s well. Still think the UI is a bit too big but it's nice that it looks cleaner.
S

May be taken down. Shows Co op play.

I'm downloading it just in case...

This looks so good.
I

Looks and sounds amazing. So excited!
I

3 players in the game makes dark souls no fun.

I thought this was running on PC at first, but then I saw the PS button prompts. Wow the graphics have come a long way since Demon's
P

Dissapointed that he didn't pick the new dual swordsman class.
I

That upgrade in graphical fidelity makes me amazed at how far they have come in that regard since the days of Demon's Souls.
A

"Commence Sparring"
"You Helped The People"

The menu select sounds are pure evil. They need to release an open network test on Halloween night.
M

Man that is quite a graphical upgrade.

when is the beta open for the UK?
C

Hype out of control

I need in this beta.
C

Please do. Every single armor shown so far has looked great.

It looks so good! I need it now! March is to far away.

you haven't lived until a random little kid ask you "how do you make love".

Can this game's design (or TW2/3's) be implemented in a more sci-fi world, like say, star wars (light sabers instead of swords at the end)?
L

It's drastically better. It was immediately obvious to me.
G

you haven't lived until a random little kid ask you "how do you make love".

really ? It's clear as day for me. If the the beta wasn't ps3 only I would have thought it was the pc version.
C

Can this game's design (or TW2/3's) be implemented in a more sci-fi world, like say, star wars (light sabers instead of swords at the end)?
Click to expand...

YOU HELPED THE PEOPLE.
C

Looks so nice. Even then, I want a next gen version so bad.

I would gladly pick this game on PC, but Dark Souls is plagued with cheaters last time I played.

I would gladly pick this game on PS3, providing the framerate is stable this time, but hacked PS3s have access to the PSN. While cheating didn't seem prevalent while playing TLOU, it was annoying when it happened. I can even imagine how worse would be if a cheater invades me in Dark Souls.

For a next version, I would only want 1080p60fps and no cheaters.

LunaticHigh said:
It's drastically better. It was immediately obvious to me.
Click to expand...

double jump said:
really ? It's clear as day for me. If the the beta wasn't ps3 only I would have thought it was the pc version.
Click to expand...

Nope, still not seeing it.
Maybe it's because I played the first one on PC and I have different expectations?
G


Which is awesome.
H

FreddieQuell said:
Would gifs be cool to post here?

But the real question is: is the "is that it?" emote still in the game?
S

camera looked like it was resetting when the dude was walking up the hill (vid 1). kinda like it was working against him....

second video ends in typical DS fashion, that fiend had a freaking sliver of life to go. I would have done the same thing, it could have gone either way.
V

sprsk said:
YOU HELPED THE PEOPLE.
Click to expand...

Hard to get a feel for the game with 3 people running around.
S

In video 2, he summons a guy that has Cloud's sword from FFVII.
C

Coiote said:
Looks so nice. Even then, I want a next gen version so bad.

I would gladly pick this game on PC, but Dark Souls is plagued with cheaters last time I played.

I would gladly pick this game on PS3, providing the framerate is stable this time, but hacked PS3s have access to the PSN. While cheating didn't seem prevalent while playing TLOU, it was annoying when it happened. I can even imagine how worse would be if a cheater invades me in Dark Souls.

For a next version, I would only want 1080p60fps and no cheaters.
Click to expand...

The absence of GFWL and having dedicated servers should really help with this issue.\ on the PC front this time around.
H

Have the animations been downgraded? Look at the way the guy runs. Looks absurd.

Other than that I like what I see. Seems like a return to Demon's Souls dark environments.
D

This series is going places!
P

lmao at the guy getting wrecked as soon as his phantoms aren't there to save him.
K

Is it just me or does the walking speed seem a little faster?
Looks great...trying not to watch too much, though.
You must log in or register to reply here.

LTTP(I guess): Demons Souls is probably the most unfair souls, or in fact maybe any other game out there imo