ScribbleD said:
Destructoid has a gallery of the new screenshots up on their site: http://www.destructoid.com/hot-new-...2.phtml?utm_source=dlvr.it&utm_medium=twitter
Click to expand...

I can't link the Famitsu images because it's not allowed, but here are amateur translations for the story bits that go with them from 4chan (with some alternate translations from reddit).

I have drawn convincing stand-in images where appropriate to go with them:

PROLOGUE
This is Lothric.
A place you have drifted to that the heirs to the flame, the Lords of Cinder, call home.
All the pilgrims are heading north.
They know the meaning of the prophecy:
"When the fire fades, the lords have no thrones."
When the First Flame dies out, the bell rings,
And the old Lords of Cinder will be called awake from their coffins. 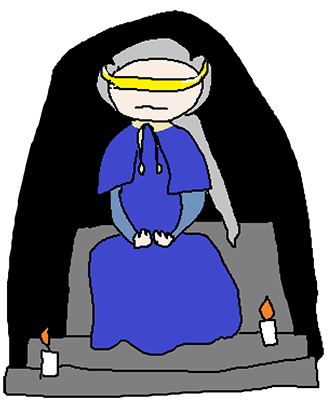 FIREKEEPER
The/a firekeeper of this game (not sure if they're implying she's the only one that remains), she protects the bonfire at Firelink Shrine and exists to serve the player.
She is losing the light and conceals her eyes with a coronet. 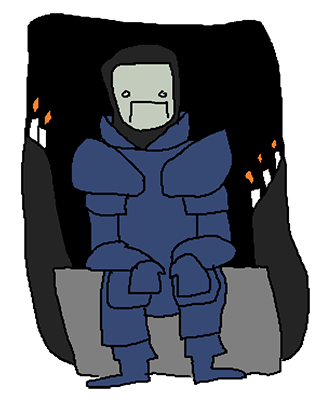 HAWKWOOD
A man that sits at Firelink Shrine.
He is an honorable fugitive from the immortal army of Faran, and sits alone before ashes without flame.
However, he is heartbroken, and is decorated with no more than his armor and his greatsword.
[However, his heart already broken, the armor and greatsword of the undead company are merely adornments.] 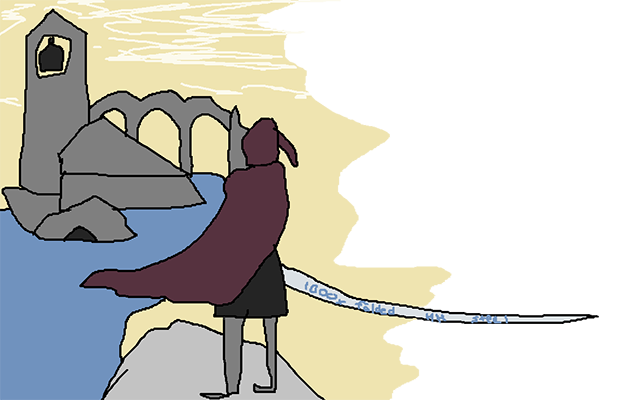 FIRELINK SHRINE
An important place that exists high up; and looking down upon Firelink, a lone mercenary.
Endowed with great talent, he wields twin song/evil blades, with the skill an dexterity of a swordsman. 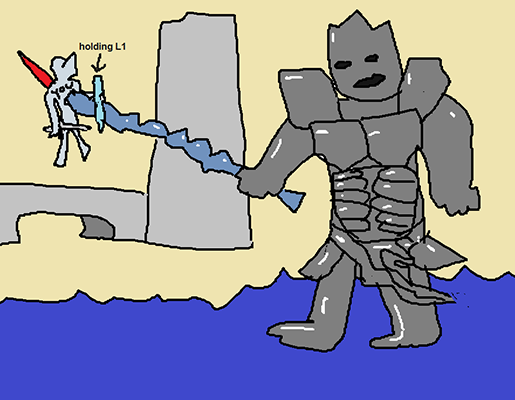 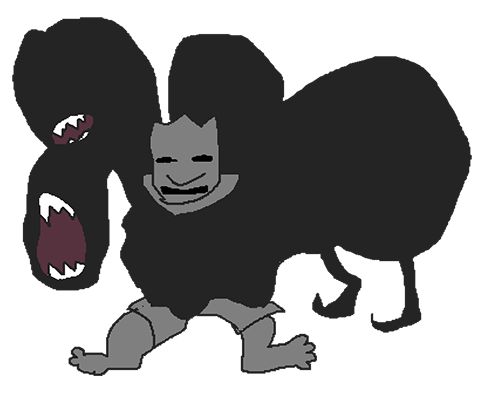 STRUGGLE TO THE DEATH WITH A DARK, WRIGGLING THING
Pus that spills out from within the Ash Adjudicator, Gundar, that he calls "a dark, wriggling thing".
Spending a long time within him, having had ash without flame, this thing that dwelt within his bowels, and now runs rampant in the world, is an omen of ruin. 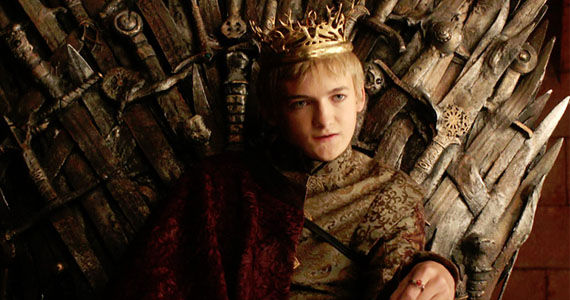 A SMALL MAN WHO PRONOUNCES HIMSELF A LORD OF CINDER
Ludleth of Courland, a small, seedy-looking man.
Sitting atop one of the five thrones of the Firelink Shrine, he proclaims himself a Lord of Cinder. 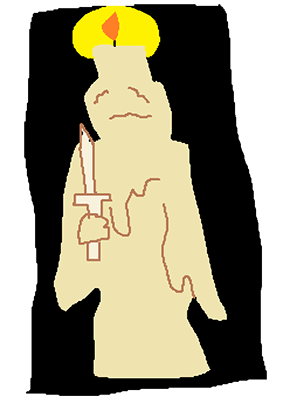 WISEMAN OF THE GREAT ARCHIVES
Former wisemen that studied at the Great Archives.
The sword is a candlestick that emits a guiding light.
Their bizarre appearance, a candle worn atop the head, is said to be a curse inflicted upon them by the magic of their books.
[The reason for the outlandish guise covered in wax is a spell preventing them from being captured by the evil spirits of the books.] 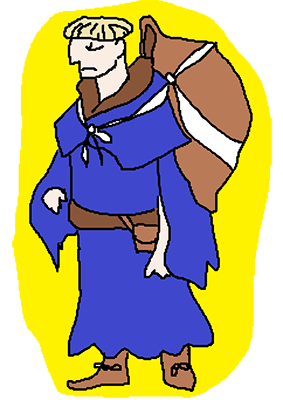 TRAVELING CLERGYMAN
The traveling clergyman is clad in blue robes, a sign of the immortal/undead, and is burdened with a large lid/cap on his back.
The lid/cap is born from within undead and seems to beckon someone.
[The lid/cap is apparently a thing that restrains that something which before long will be born from the inside of the undead/hollow.] 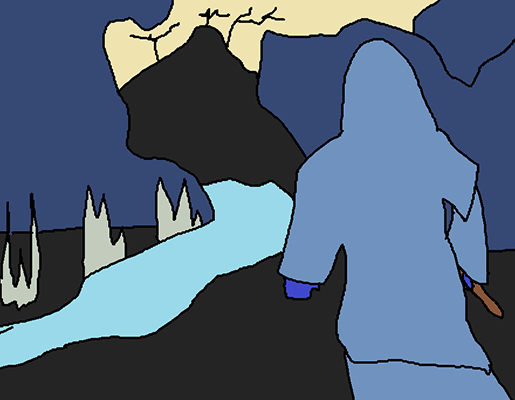 POTTER'S FIELD / PAUPERS' GRAVEYARD (cemetary for those who left no relatives behind)
To revive the flameless ash, a magician went to roam the potter's field.
Clad in robes, he can wield all manners of Soul magic.
[The sorcerer who came about wandering in the Cemetery of the Kinless, brought back to life as "ash without fire".] 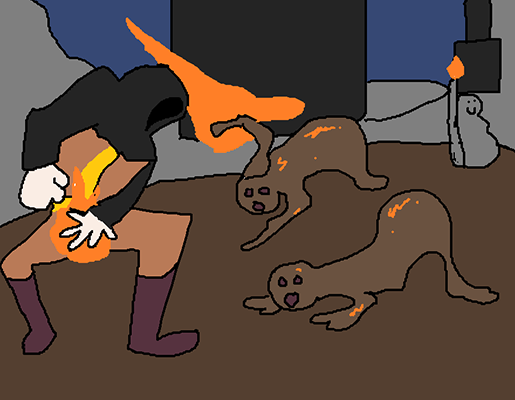 GROTESQUE MAGGOT-PEOPLE AND THE PYROMANCER SHAMAN
Within the cathedral, grotesque maggot-people are challenged by a pyromancer.
Pyromancers practice the wielding of fire.
The maggot-people within cling to their canes, and believe the light emanating from them is a miracle of the gods. 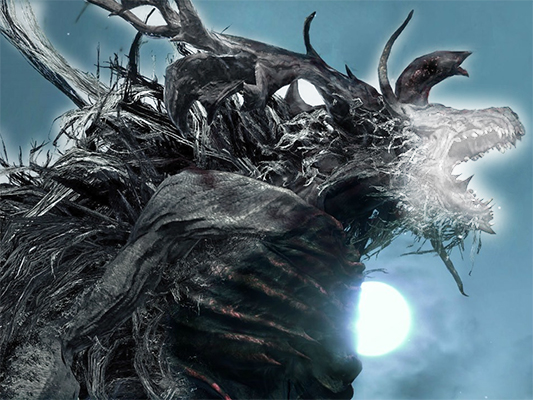 DEFILED BEAST
Hunched over, the defiled beast walks on two legs.
It is said to have dug up/reclaimed a Soul from the depths of the swamplands. 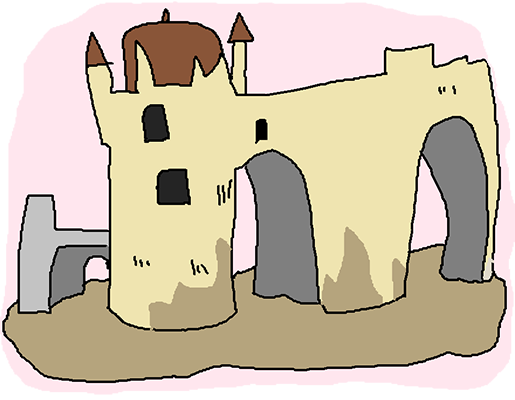 ANCIENT RUINS ATOP THE CLOUDS
Cloudtop, ancient ruins said to exist on a lofty peak.
It is a place those on the "path of the dragon" aim to reach, but its location was lost to the annals long ago.
A

I see Dark Souls is going for a new art style for the final entry. Looks... interesting. I wonder if this has anything to do with Undertale's success?
M

I really hope the opening is mysterious like Dark Souls and Bloodborne.

Loving the new firelink shrine, too. I'm hoping it will be like the Nexus in DeS. Nexus was the best, followed by Firelink, then Majula. I didn't think much of the Hunter's dream tbh, not enough NPCs to talk to.

Dark Souls 2 was fun, but the opening was awful!

When that old woman says something along the lines of 'you'll lose your souls over, and over again... prepare to die' I was like, cheers for the dank memes brev.

I'm liking the art direction the new game is taking. The Undertale influence is strong.

It seems like this game could have a possible stronger link with Dark Souls I since there are a lot of recurring elements, especially Firelink Shrine.
R

Something feels off about the art direction this time
P

This is probably the most creative, and best, way to get around the no scans rule.

I wonder if the DS evil end is canonical....
Z

Guys do you think this could be a sign that From is considering bringing the Dark Souls series to 3DS?
H

OP is forever cool in my book. What a great idea!

Edit: The fact that it's being playfully trolled by a mod is a good sign as well. Subscribed.
T

Best thread of the day!
G

All right, you win.
W

Are you sure you're not the Art Director for Dark Souls 4?
H

Art is on point, as always in Souls
C

I see they are using Xbox One screens for their promos this time.
Z

This is amazing.
P

So Paintborne is the next Souls game by FROM?
T

Primethius said:
This is probably the most creative, and best, way to get around the no scans rule.
Click to expand...

OMG, I love the drawings, haha

The Ancient Ruins atop the clouds bit makes me think of Lordran and how high up it was. Like when your in the Undead Burg and meet Solaire if you look down you see nothing but clouds. If we actually get to return to some Dark Souls 1 areas I'm gonna shit my pants.

Kinda funny business is this?

Went one sentence past PROLOGUE.

Read too much.
S

You're the best op


duckroll said:
Guys do you think this could be a sign that From is considering bringing the Dark Souls series to 3DS?
Click to expand...

Ah I see they're targeting 60fps

That OP is amazing. Take notes From.
P

Or firebending his balls.
E

tcrunch
the most aspiring artist in all of lordran
(Today, 06:59 PM)
A

well, where did you expect pyromancy to come from?
R

This ... wow. Thread of the Year contender.
S

I love the recreations.
I

So, the lords of cinder have come back to life and our character can acquire an state called "lord of cinder" too... Does that mean that our character is the same guy from Dark Souls/DS2?
O

This whole thread is killing me.
You must log in or register to reply here.