Destiny PS4 Timed Exclusives will last until "At least Fall 2015" 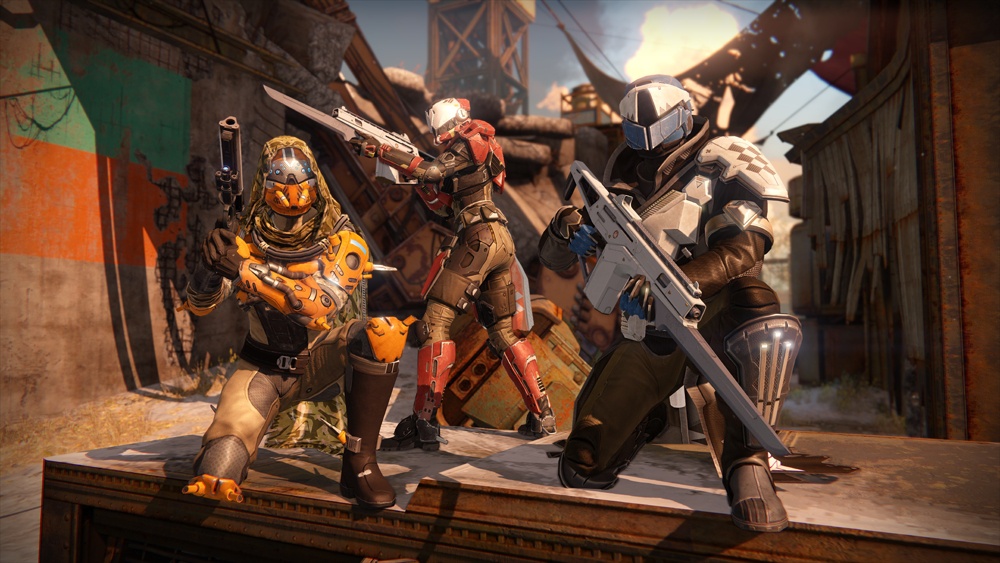 Exclusive content for PlayStation 4 owners includes the Exodus Blue Competitive Multiplayer Map, Dust Palace Strike, Weapons, Ships and Gear that will only be on PlayStation until at least Fall 2015.
Click to expand...

What the eff man? At least one full year?... that seems like a long time. Strikes from the alpha seemed like fairly valuable pieces of content, unfortunate they are closing this off for so long.
W

Exclusives are awful. That seems way too long
D

Wario64 said:
Exclusives are awful. That seems way too long
Click to expand...

Better than the whole game being exclusive I guess.
L

When's Last Of Us exclusive strike mission in Destiny?
R

Untrue until it's officially announced.
T

Nothing! I said nothing!

Smart move by Sony. They're essentially pushing the game as an exclusive without having to moneyhat the whole game. I'm sure the gap in sales between PS4/XBO will be pretty big.
S

Aren't these sort of timed DLC's usually limited to about a month ? A year is an awfully long time.
S

FutureWarCult said:
Untrue until it's officially announced.
Click to expand...

So amazon is just pulling this out of their ass, then?
G

Strange, Fall 2015 should be the game expansion, maybe DLC exclusivity ends with expansion release.
A

Lame, and I'm getting the PS4 version.
R

Holy shit. That's insanely long for a timed exclusive DLC deal. I figured it would be a couple weeks, a month at most. Sucks for the Xbox crowd.
A

Wouldn't be the first time. Still, it could happen.
B

Was getting the PS4 version anyway. Affects me none.
S

I guess thats good, I don't mind I'll survive without playing it I'm sure plenty of content is left for us on the XB1. I don't get the mind set for doing something like this this one game having a few exclusives won't be pushing many people to buy a PS4 instead.
R

I certainly wouldn't trust Amazon with my baby.
P

Courage said:
Smart move by Sony. They're essentially pushing the game as an exclusive without having to pay the moneyhat.
Click to expand...

Bungie.net forums is going to flip some burgers when they get word of this... they already were incensed about the alpha exclusivity.

A full year? Might as well be exclusive forever, haha.
S

"That clicker came from the fungus"
C

Yep. Console bundle, exclusive DLC, early beta/alpha access. I'm sure there'll be PS advertisements that will similarly show this around mid-late August. It's gonna give it a significant boost.
F

Ape said:
Wouldn't be the first time. Still, it could happen.
Click to expand...

FutureWarCult said:
I certainly wouldn't trust Amazon with my baby.
Click to expand...

One thing is amazon making up placeholder dates for games, another is specific details such as this. Amazon is just posting what they got. The only possibility is that the info they were given was incorrect but I kinda doubt that given how hard sony has been pushing destiny.
W

Seems like another reason to just avoid the game.
P

Exclusive content for the best version of the game? No complaints here.
M

just in time for Destiny 2: Modern Warfare
B

Sounds kind of weird, even for activision
S

FutureWarCult said:
I certainly wouldn't trust Amazon with my baby.
Click to expand...

That's... Not where babies come from.
R

Considering the amount of loot and content in Destiny, a slice of 3 sets of armor and 3 weapons or whatever doesn't bother me much. I'm sure players level out of this equipment fairly early on. Either way, a year is pretty shitty.

Piggus said:
Exclusive content for the best version of the game? No complaints here.
Click to expand...

Well at least the exclusivity is long enough to be meaningful.
N

Holy shit, that long just for weapons skins and a map?

That seems odd, wouldn't the expansion be released by then? Who would give a shit about some exclusive DLC by then.
N

Should we have two threads? One for glorious PS4 players and the other for second class gaming citizens?

This stuff is so dumb, and it'll only get worse.
M

Doombacon said:
Better than the whole game being exclusive I guess.
Click to expand...

the difference between the two would be paying for one. not being able to get access to content when you pay the same price is absurd
F

Well they are getting their money worth out of this....

I like this better that time exclusives DLC. Never understood that making people wait 2 weeks is really going to get people to buy that version of the game.

Couldn't care less, still getting it on the Xbox One
B

N.Domixis said:
Holy shit, that long just for weapons skins and a map?
Click to expand...

Crazy isn't it? I wonder how much Sony shelled out to make that happen. Holding off those things for a year from other console(s) cannot make that much of a difference in sales that it's worth buying it out.

Also getting PS4 version, but still think it's nuts. Unconfirmed though

rob305 said:
Couldn't care less, still getting it on the Xbox One
Click to expand...

I Might end up getting both versions depending on friends
M

Courage said:
Smart move by Sony. They're essentially pushing the game as an exclusive without having to pay the moneyhat. I'm sure the gap in sales between PS4/XBO will be pretty big.
Click to expand...

But is that the best course for Bungie? Many Halo fans are Bungie fans. Fans discuss still discuss Halo at length on Bungie.net, and many Halo fans will be getting Xbox One's for the Master Chief Collection, the last thing they need is to alienate long time Bungie, Xbox fans.

This holiday is really funny. You're going to have a Bungie/Activision game (Destiny), go up against former Bungie games of the past decade (halo CE, 2, 3 - part of the MCC) and also up against Activision with Call of Duty.

Sony probably does win out in this. Aside from killzone, they don't really have a shooter that it's strictly their own or has shooter fans buying their consoles for one and Destiny seems like it could be it for them.
L

Being a Xbox player, and a huge Bungie fan, it always stings seeing all of this stuff cater'd to the other platform with no recollection to anyone else. The alpha demo, the beta exclusivity, and all these exclusive content.

But what can you do. In the end I'll still likely enjoy the game

pretty suck ass. but then again, all timed exclusivity is.
T

Yeah, it'll definitely come down to that for me too. Exclusive content is bullshit either way though.
K

Wario64 said:
Exclusives are awful. That seems way too long
Click to expand...

95% of these these platform/retailer/whatever exclusive dlc content is hardly worth even thinking about it.
Pointless stuff.
J

Courage said:
Smart move by Sony. They're essentially pushing the game as an exclusive without having to pay the moneyhat. I'm sure the gap in sales between PS4/XBO will be pretty big.
Click to expand...

You don't think Sony is paying for this in some fashion? Basically the same thing Microsoft does with COD.
You must log in or register to reply here.

Danjin44 replied
Dec 8, 2020
The PlayStation 5 and the Xbox Series X Will Both Be Partially Outclassed by the Time That They're Released And Fully Outclassed One Year Later
12 13 14 15 16

angelic replied
Apr 11, 2019
Xbox is Shaping the Future of the Console Ecosystem (Playstation is 1 ecosystem, which is called PS5
2