Humankind is under attack by an alien lifeform that is secretly trying to undermine US democracy, bring down its government and harvest the DNA of its citizens.

And that alien… is you.

In 1959 Cryptosporidium-137 arrives on Earth in search for his predecessor clone, Cryptosporidium-136. Crypto-136 disappeared after Orthopox-13 sent him to Earth to prepare the large scale extraction of human DNA.

Pox sends Crypto on a mission to harvest human brain stems (which contain alien DNA due to an encounter between Furon warriors and humans in ancient times) to prevent the Furons from going extinct. Furon genitalia have withered away generations ago due to prolonged exposure to their own nuclear weaponry.

To accomplish his mission, he must battle US forces, infiltrate and sabotage secret government facilities and defeat Majestic, a shadowy government organization led by a black-clad figure named Silhouette. 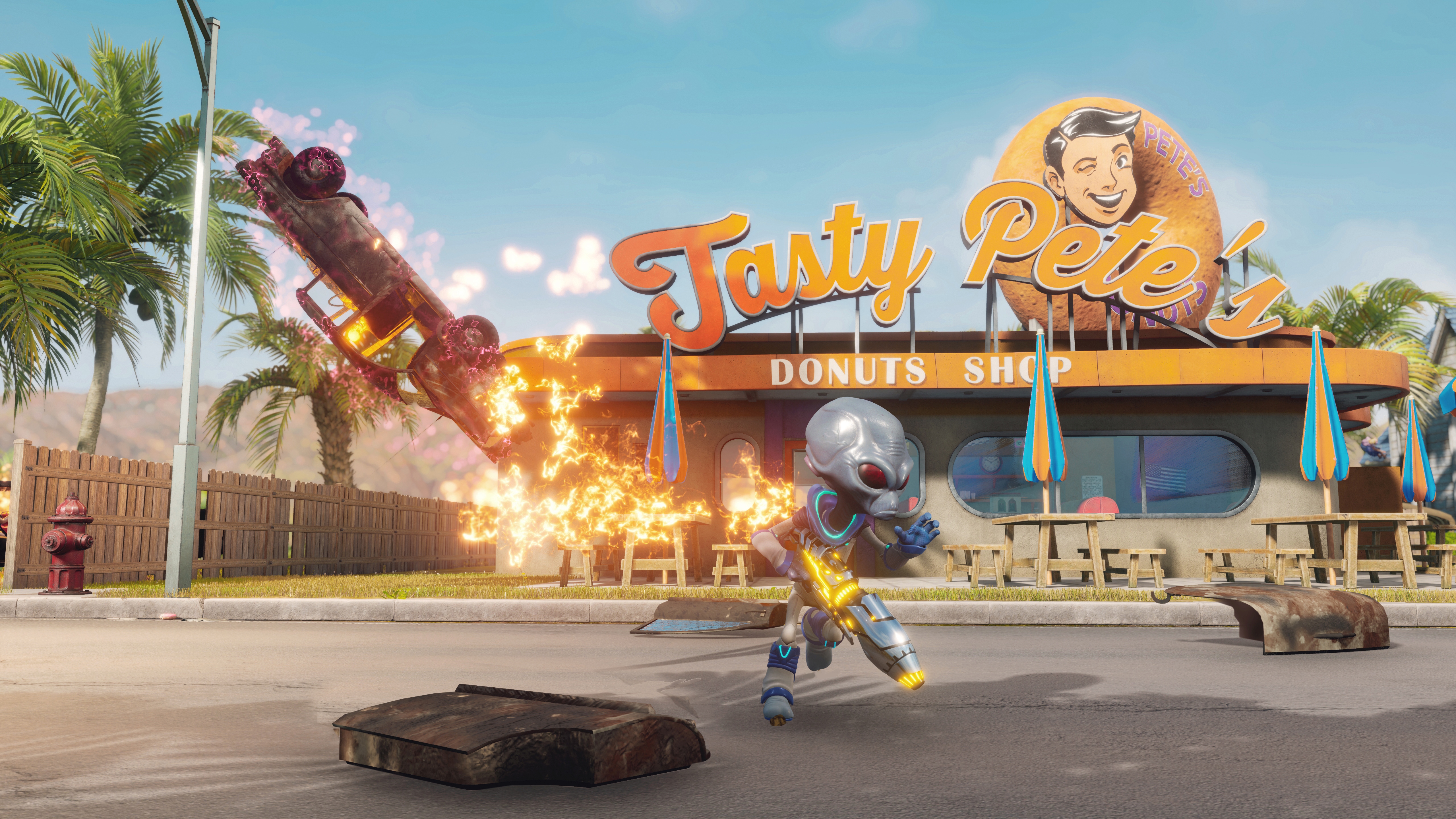 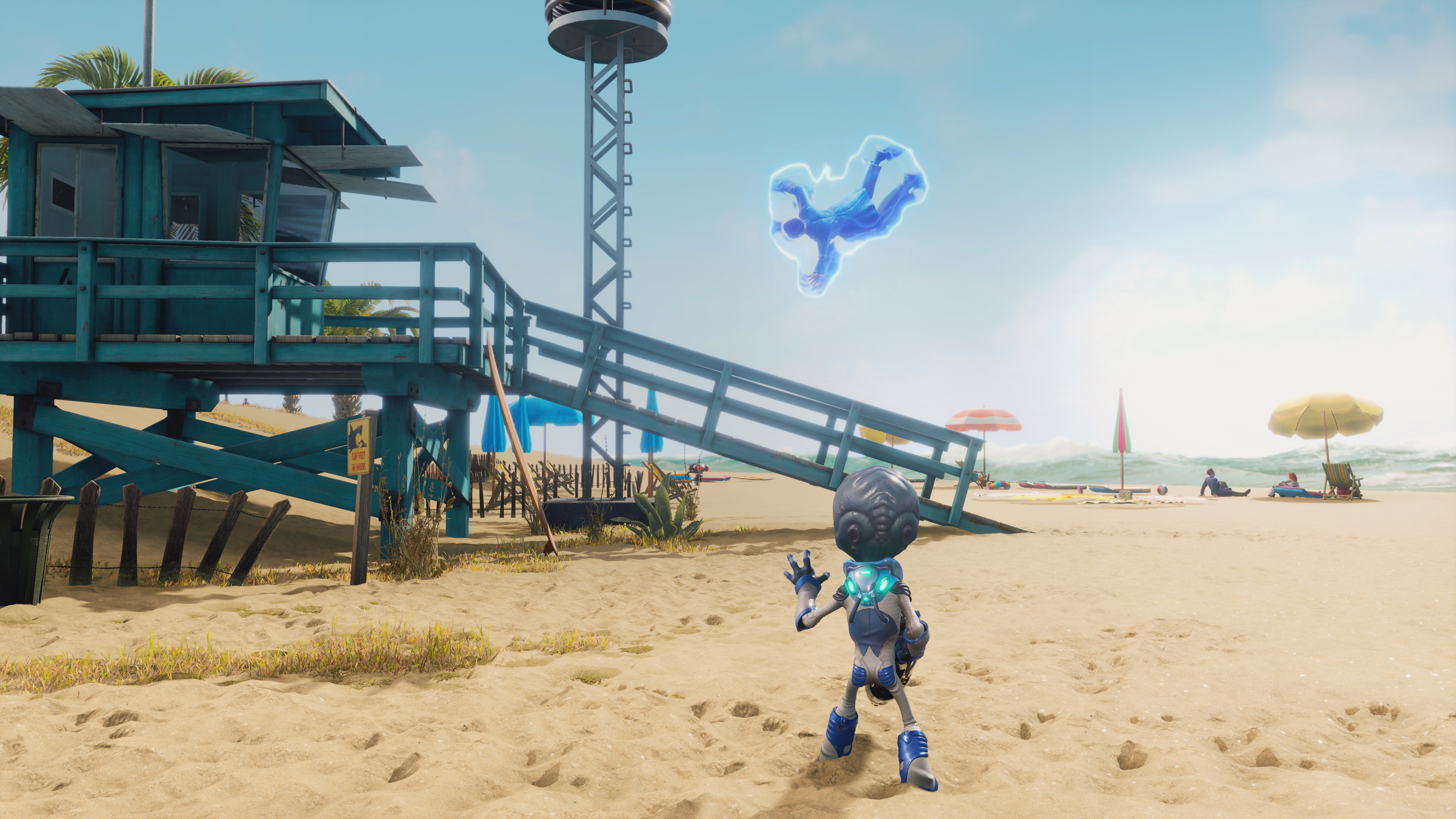 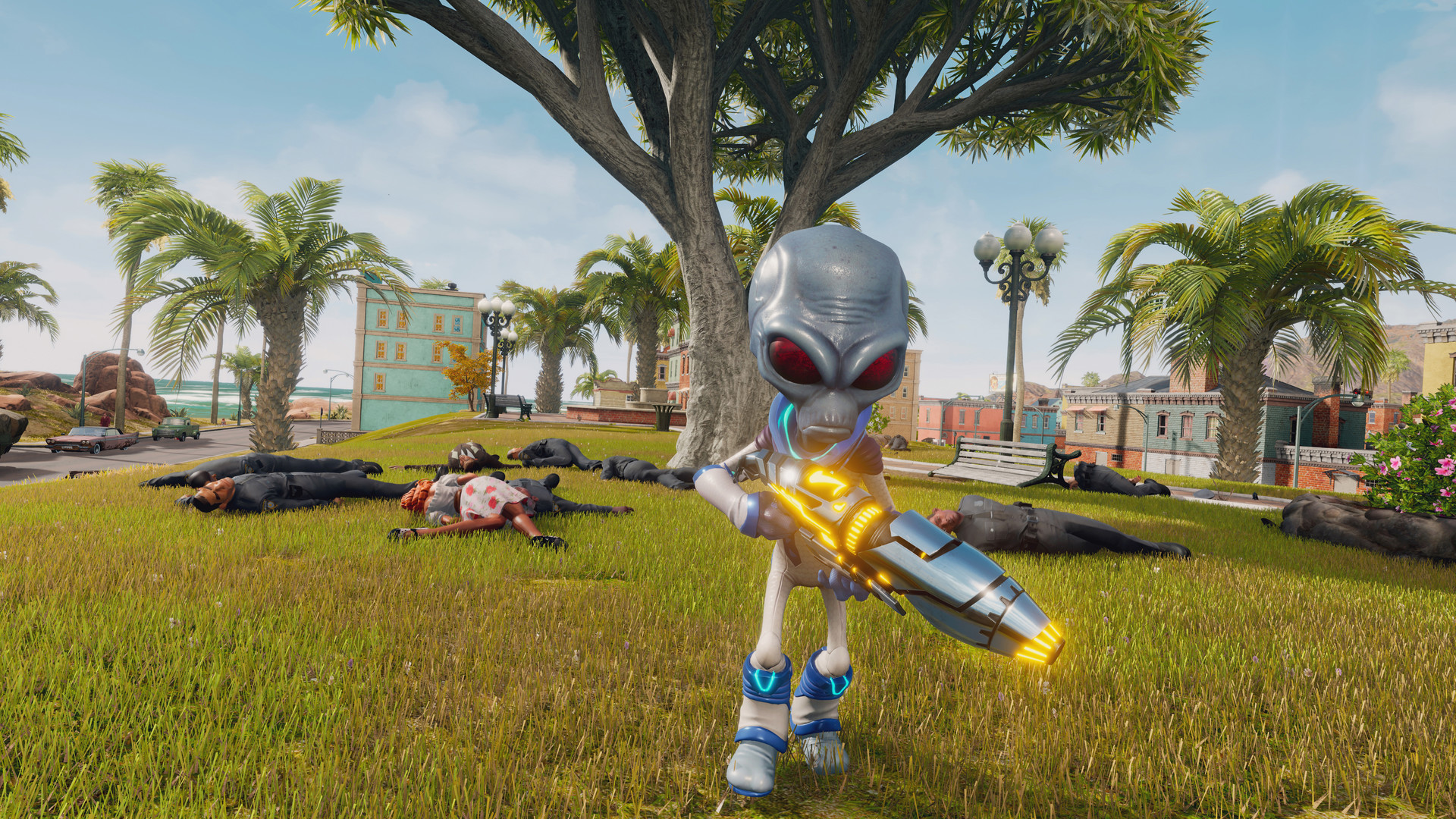 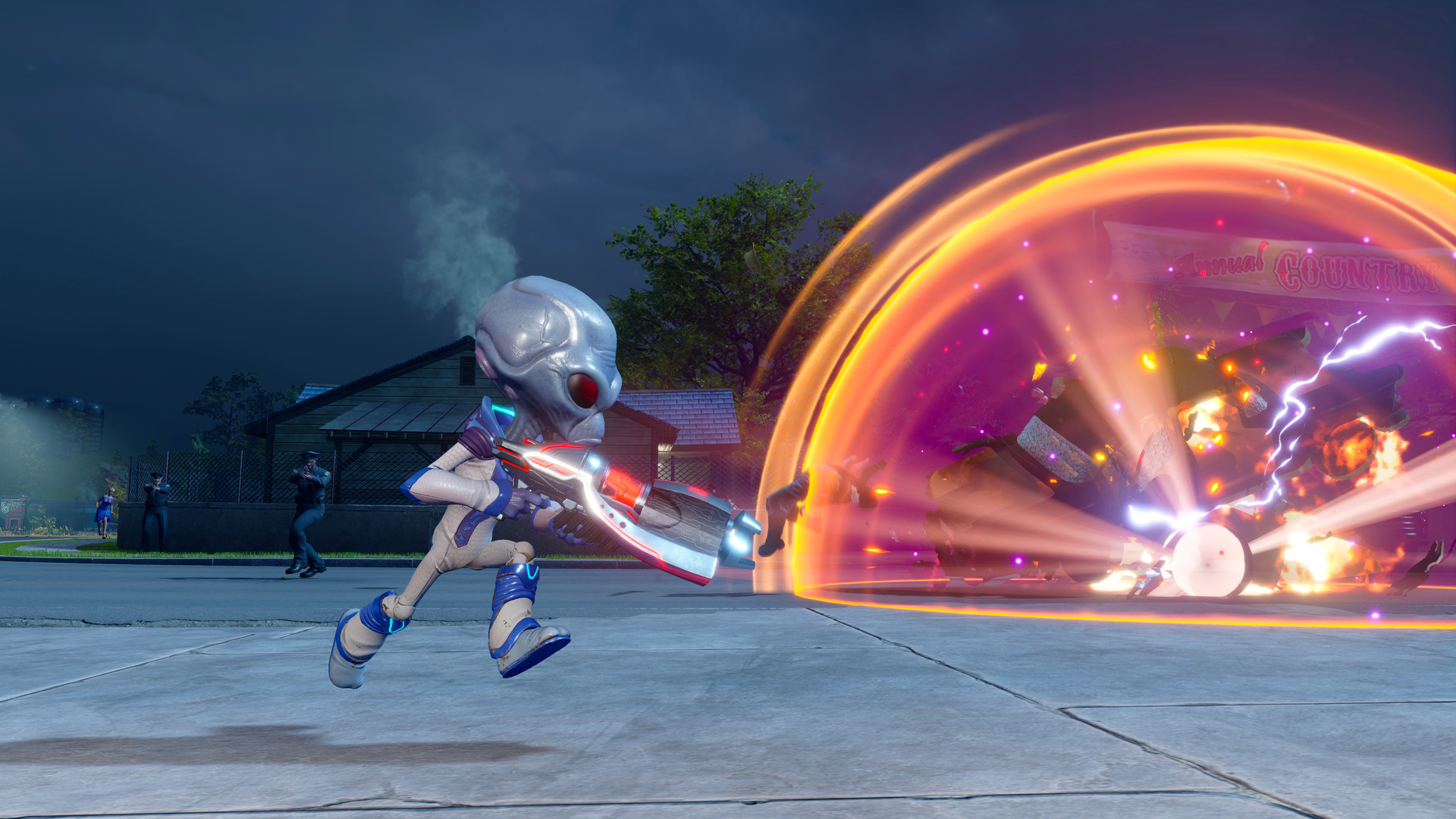 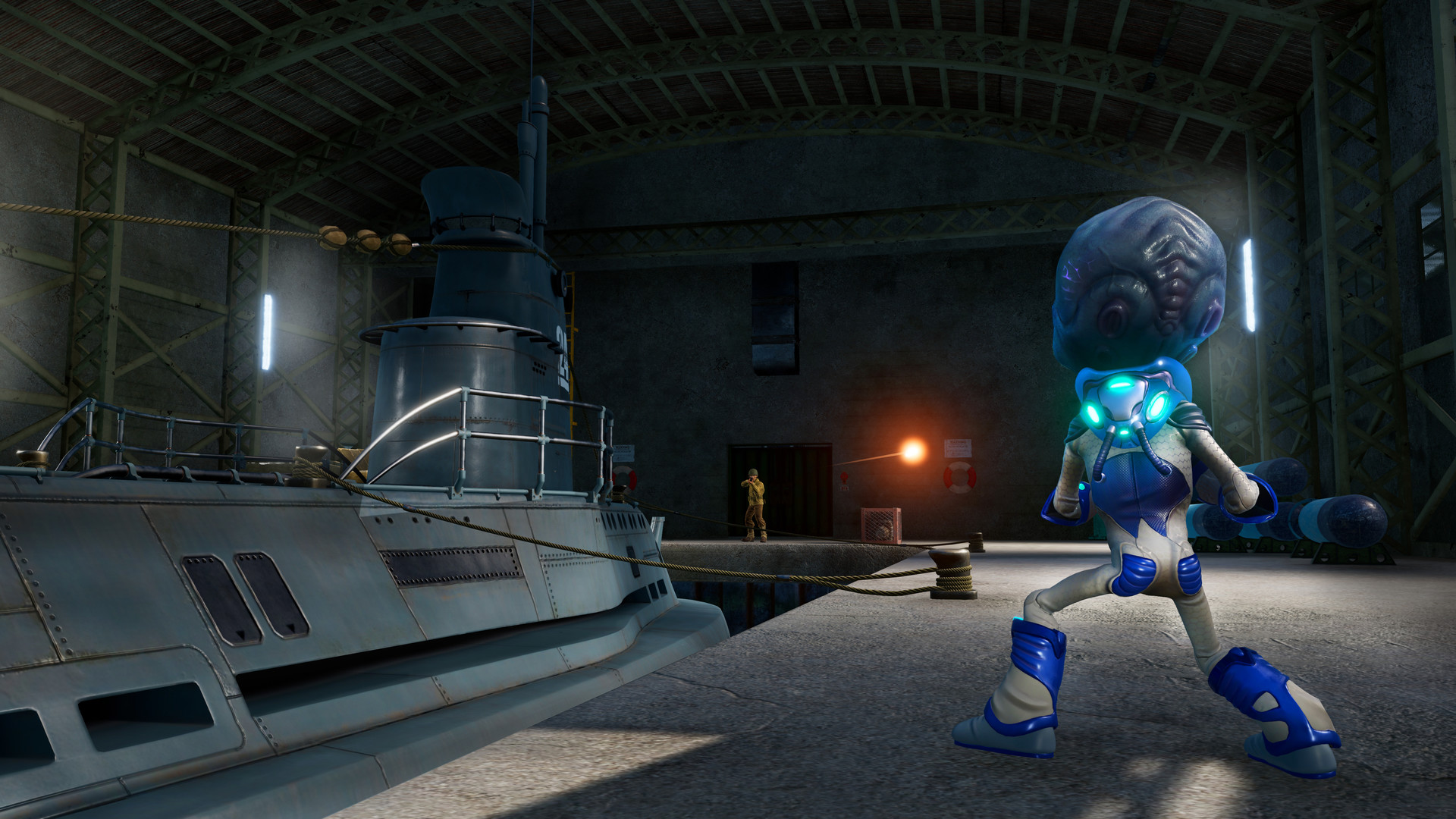 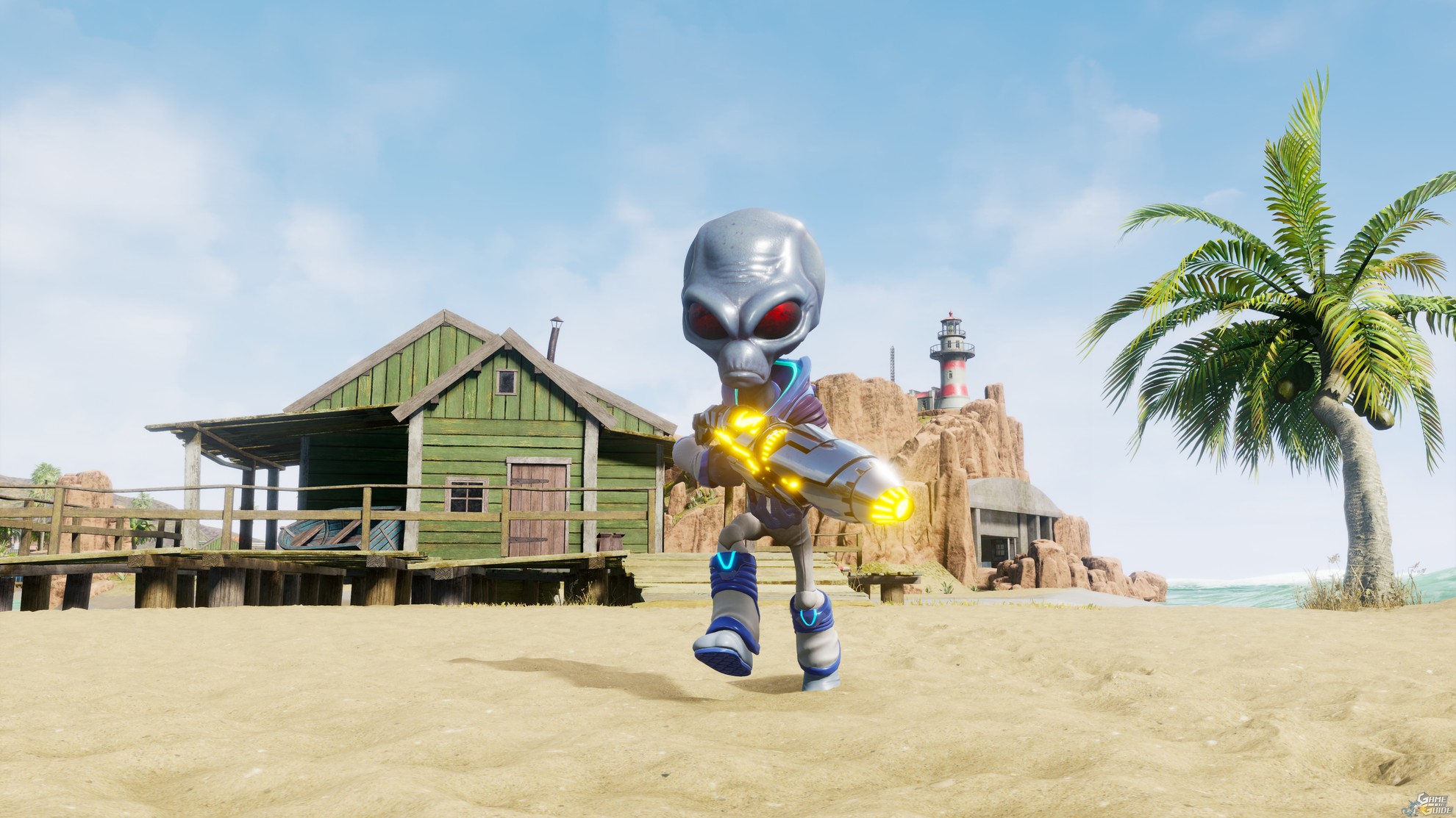 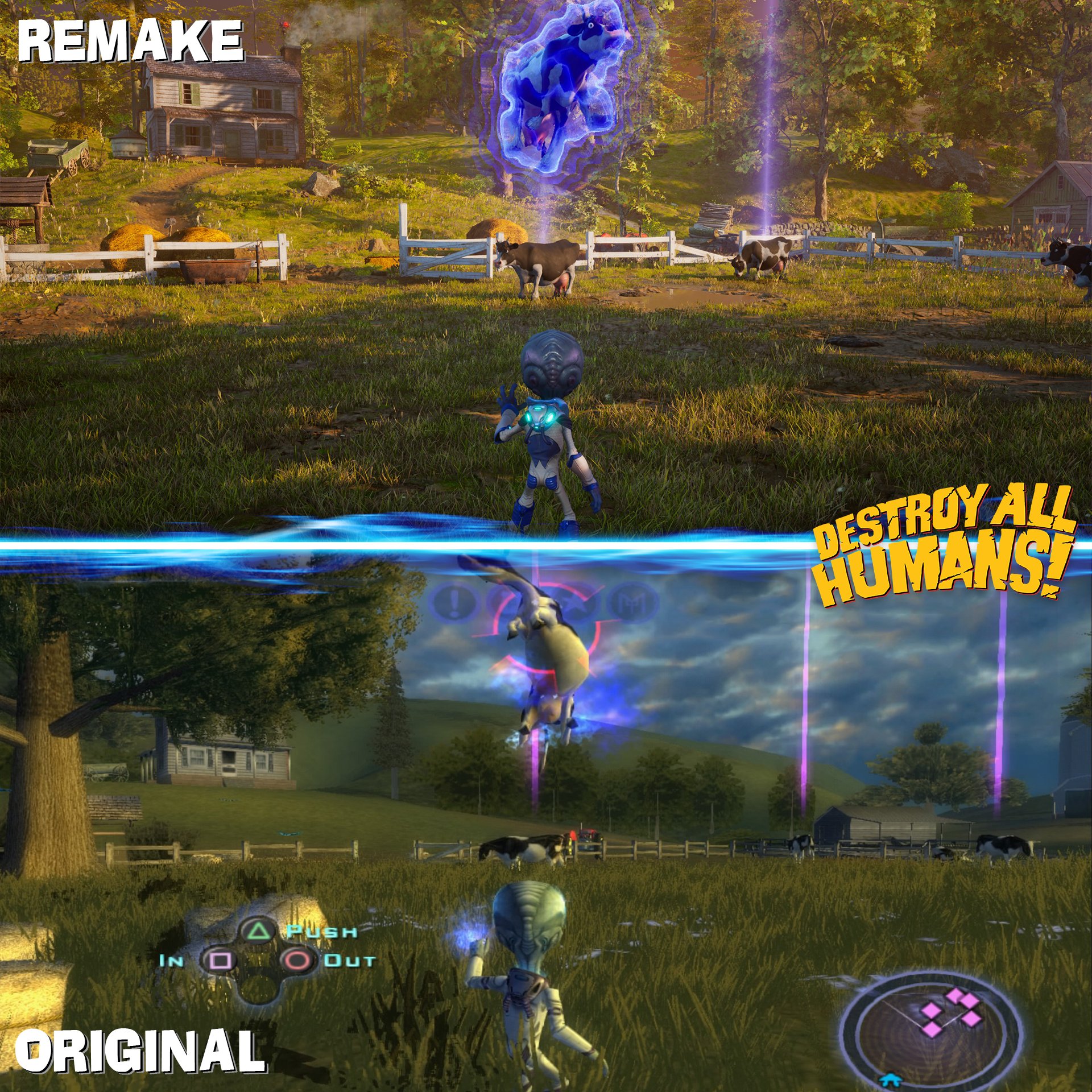 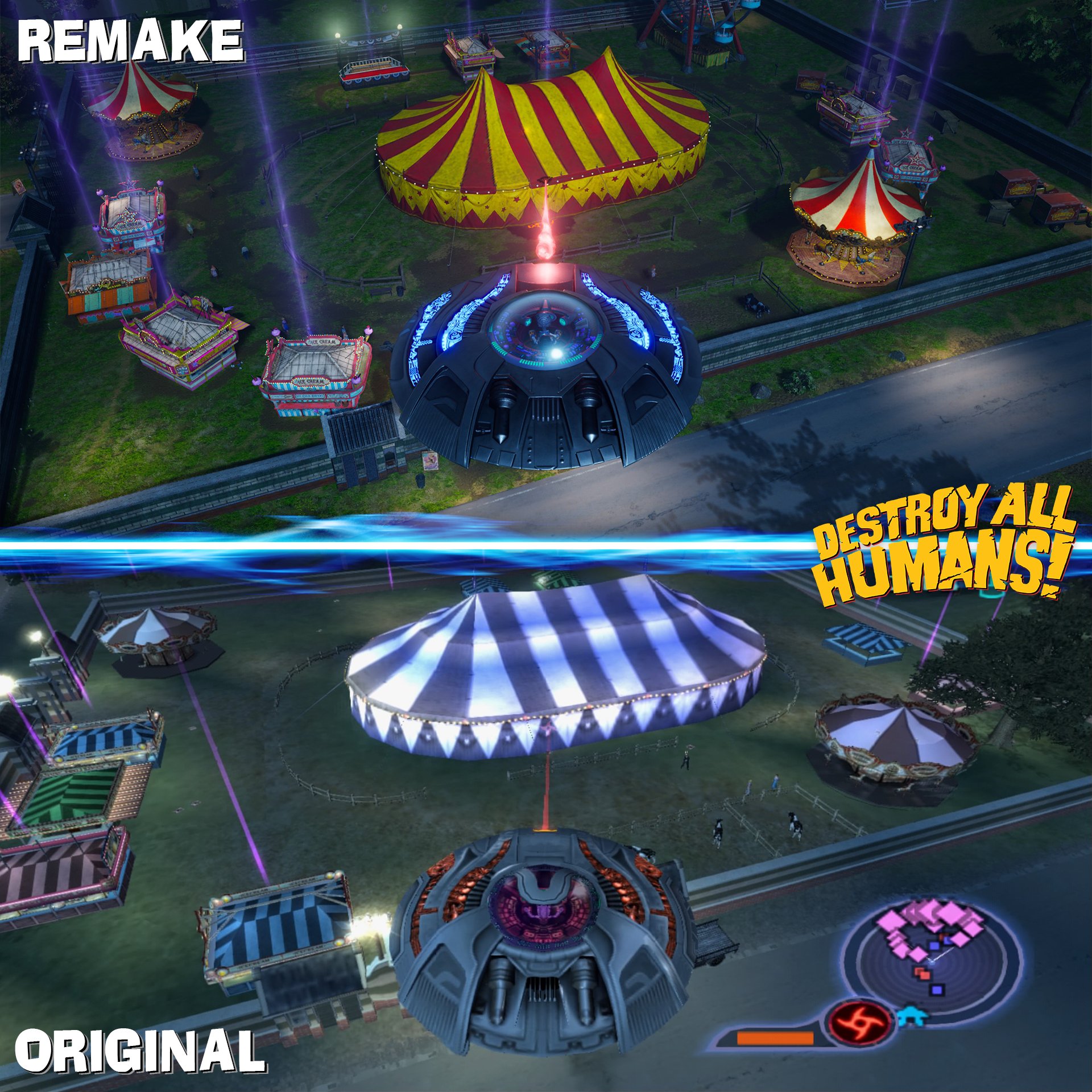 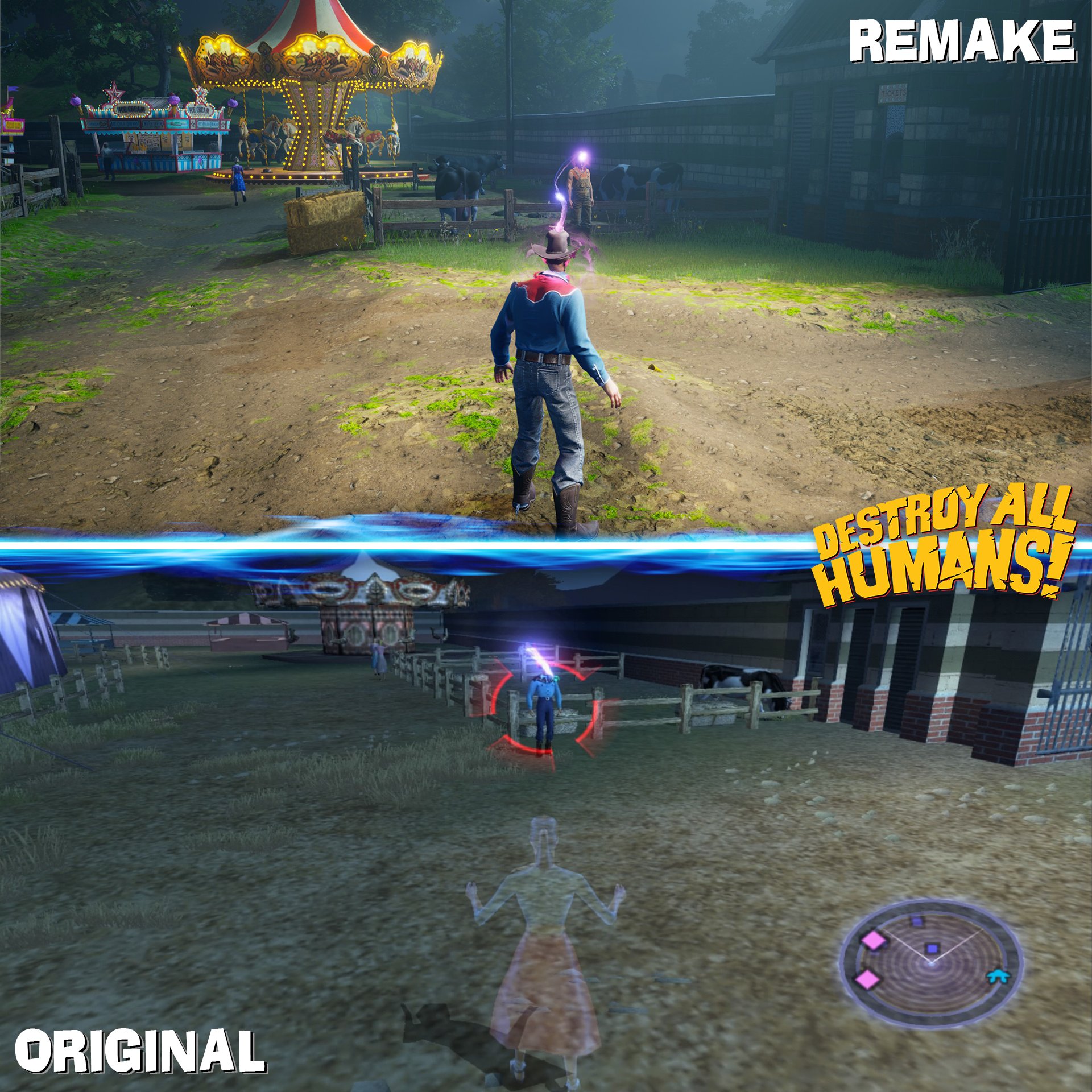 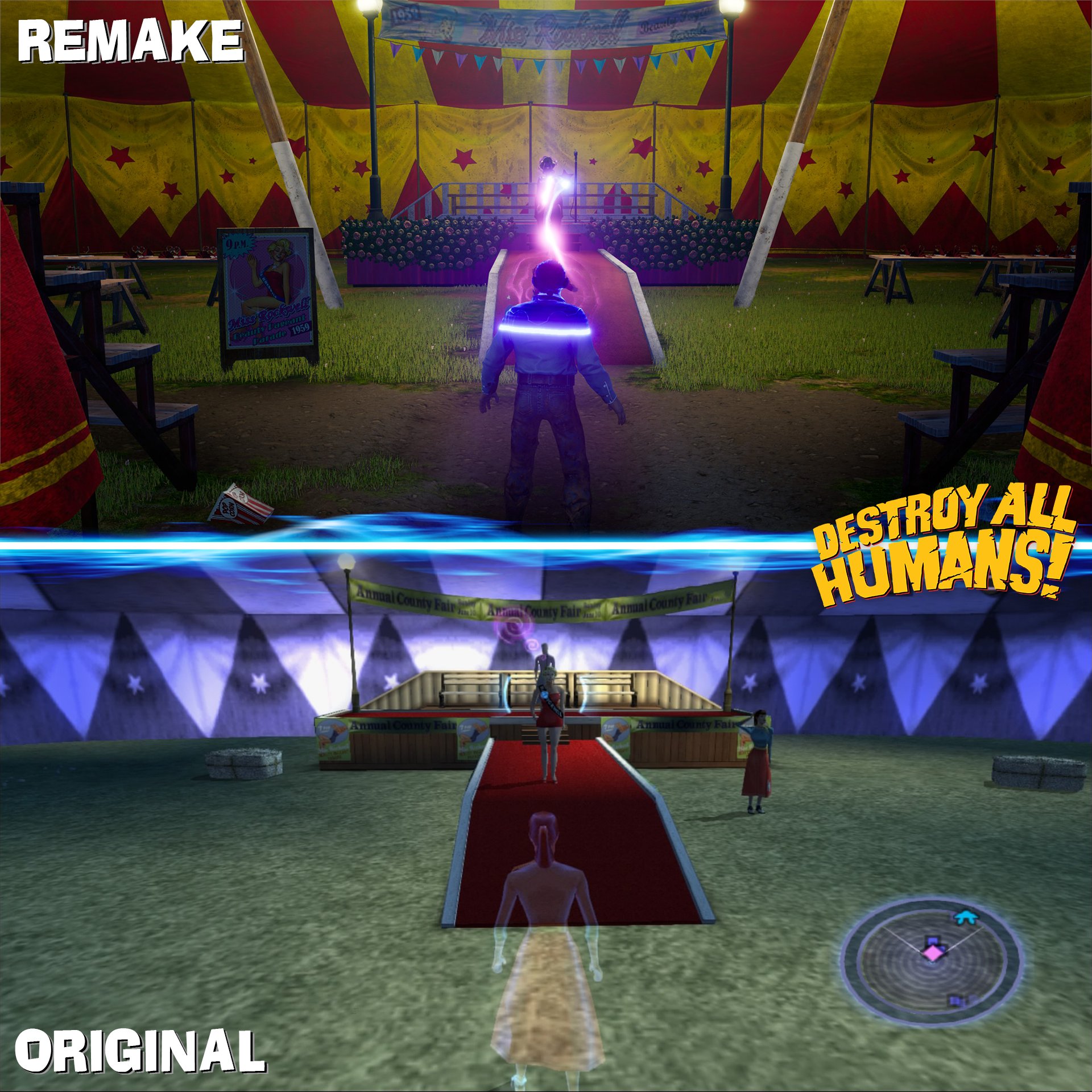 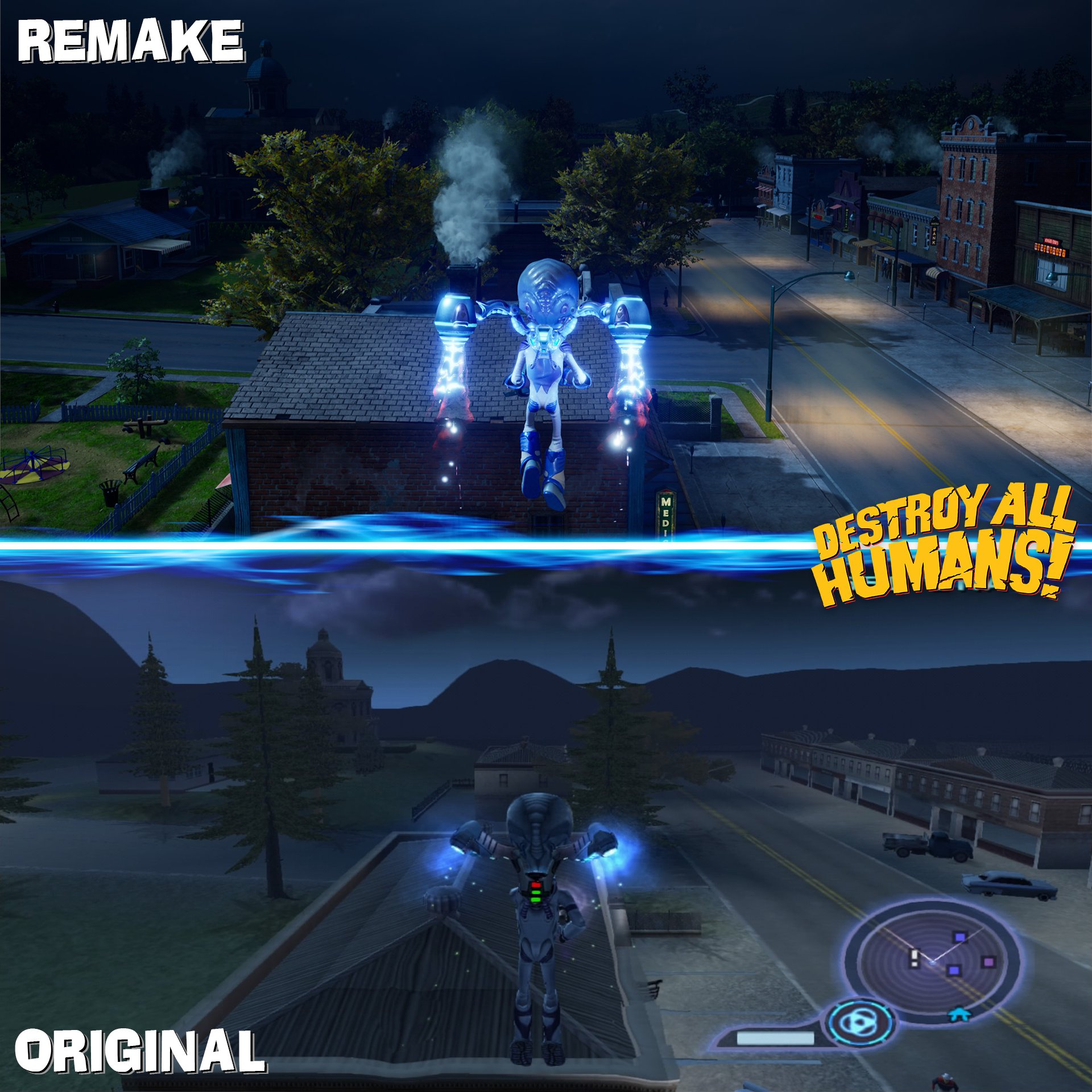 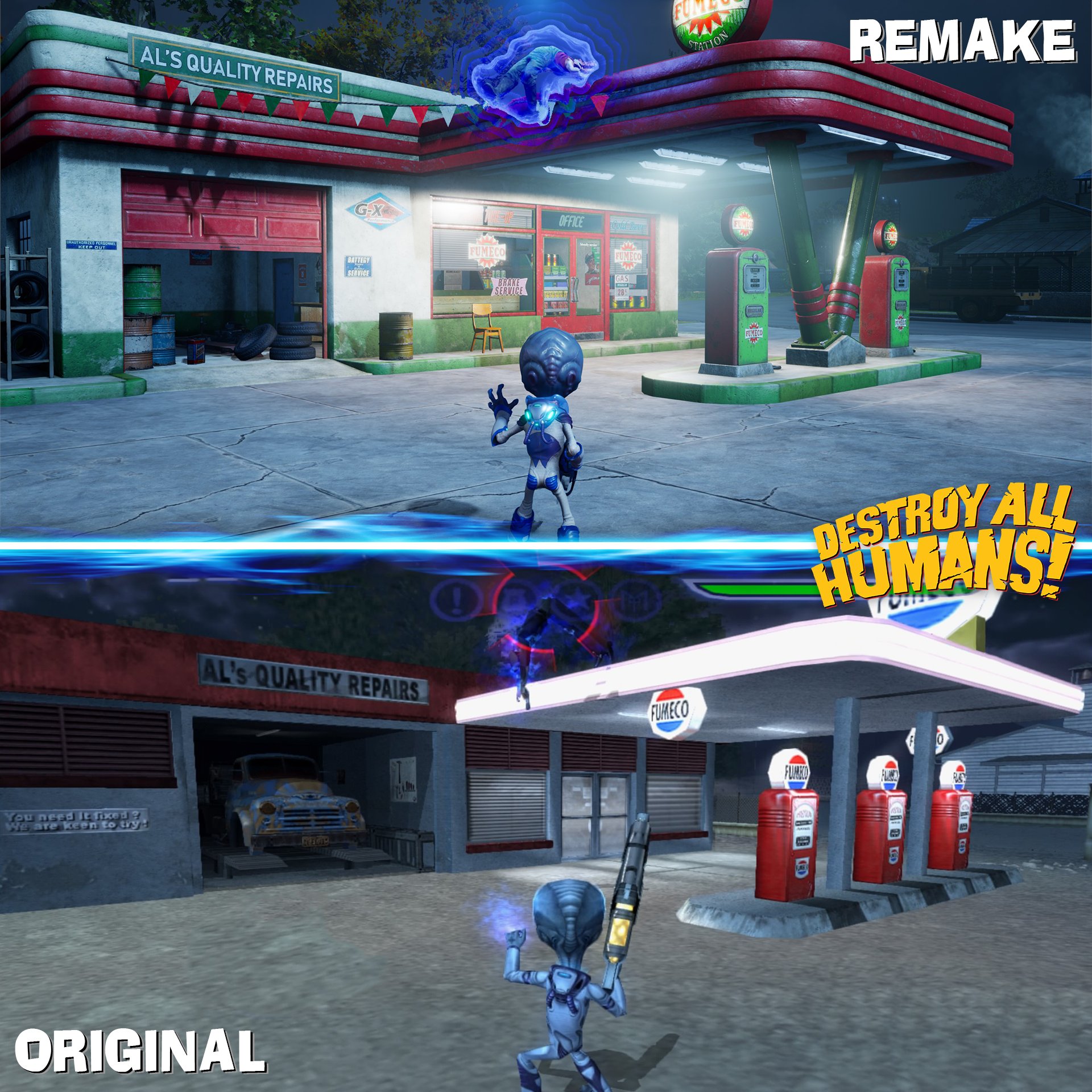 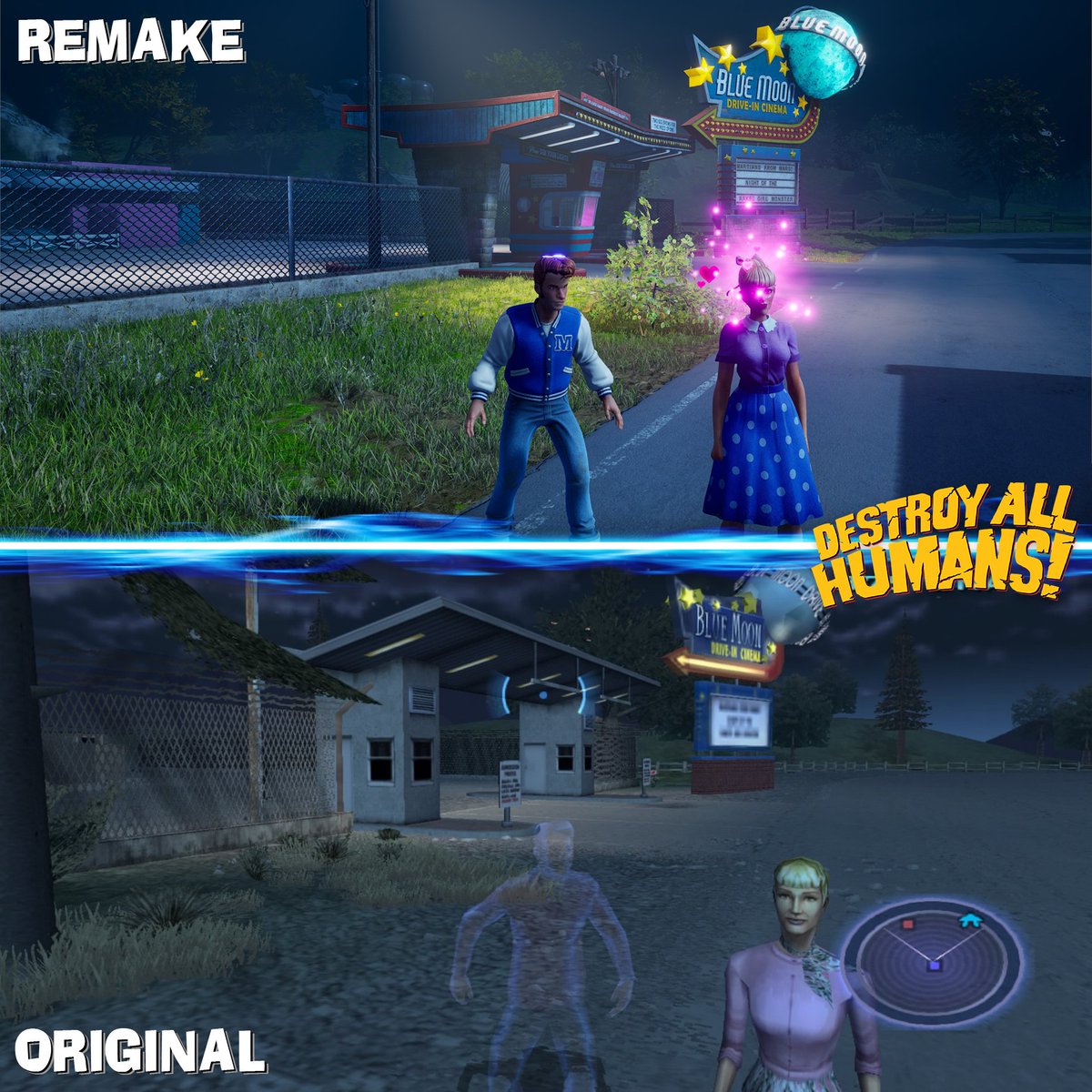 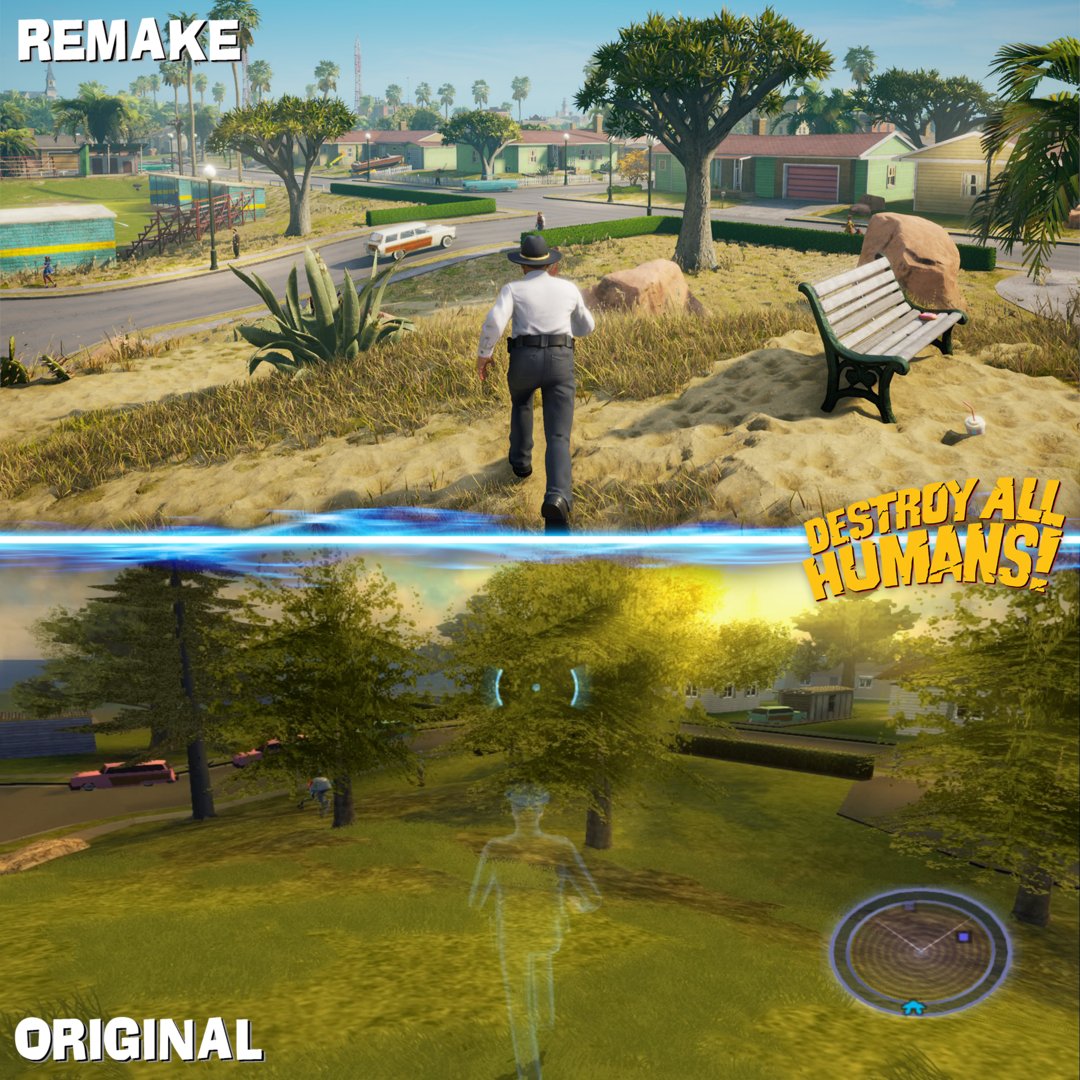 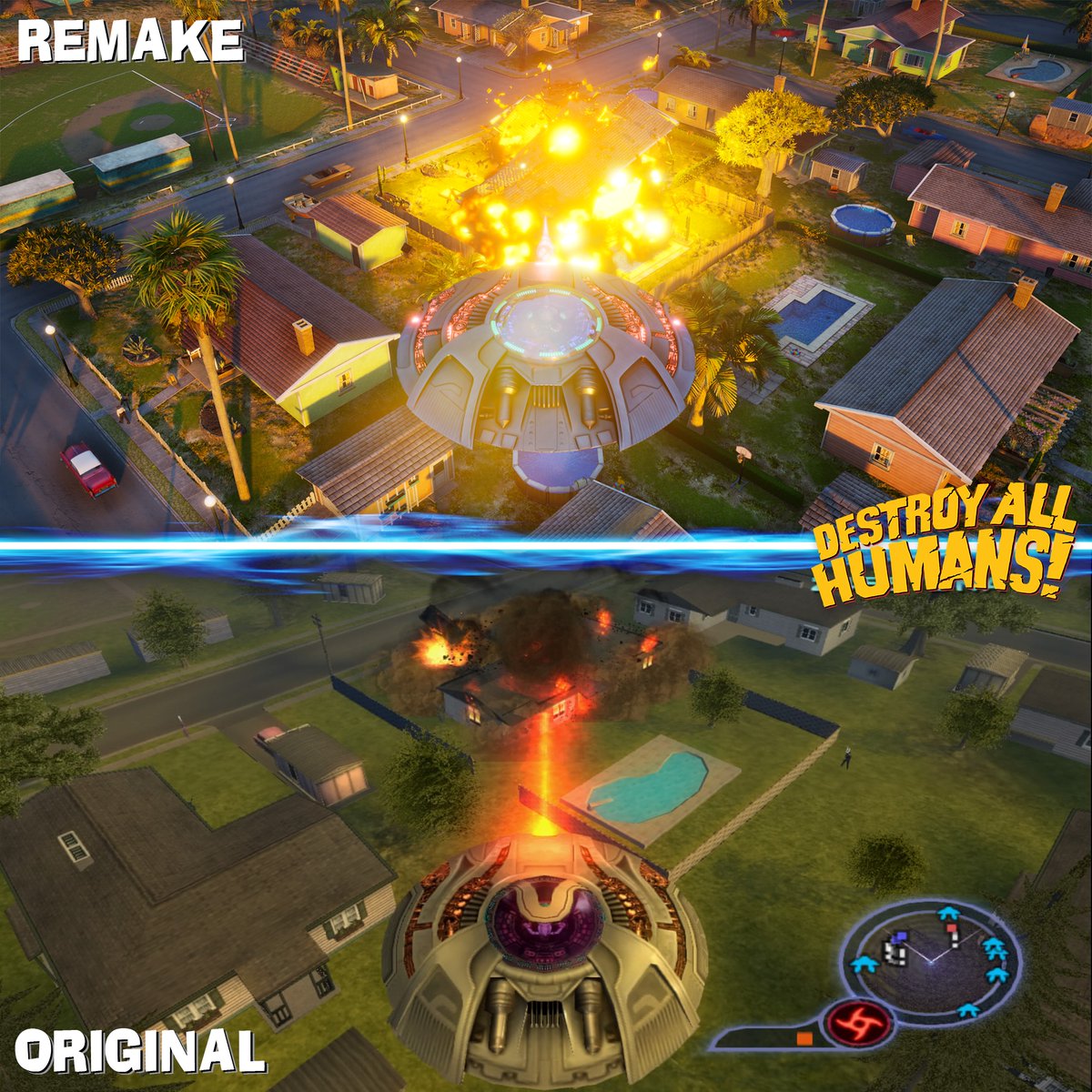 This unique example of human craftsmanship is brought to you by your benevolent Furon overlords! The Crypto-137 Edition will be available at selected retailers for an SRP of € 399.99 | $ 399.99 | £ 349.99 and contain the following items:
*North hemisphere not transparent. No Brain Juice included - sorry.

"What the Remake Changes and Improves - Gamescom 2019"

As someone who replayed the original

PlayStation 2 version a lot back in the day, the upcoming remake is actually my most anticipated game to play when it releases next year. I will be playing it on Steam and from what we've seen so far I think it looks amazing. Hopefully we will get a sequel or two as well.
Last edited: Feb 8, 2020
Reactions: cormack12, DryvBy, Cult of FartNoise and 5 others

I'm definitely excited for this. I'd love a good fuck off game.
Reactions: highrider and VysePSU
K

Didn't play the original, I'll definitely pick this up on PS4 down the line.
Reactions: VysePSU

I am excited to replay one of the oddest games of the PS2 era (at least for me). I still remember getting excited seeing this game on G4 back in the day. I had to have it.
Reactions: diffusionx and VysePSU

Union Town and Capitol City will also be interesting to see again.

Love THQ/Nordic. Games like this didnt exist anymore a few years ago, it was pretty much AAA and Indie, with no middle ground, but THQ have really reignited the AA industry.
So many good IP's they own now as well.
Reactions: Ceadeus

Stuart360 said:
Love THQ/Nordic. Games like this didnt exist anymore a few years ago, it was pretty much AAA and Indie, with no middle ground, but THQ have really reignited the AA industry. So many good IP's they own now as well.
Click to expand...
I love THQ Nordic as well. Thus far, they have given me Battle Chasers Nightwar (8.0/10), Darksiders III (8.5/10) and Metro Exodus (8.5/10) with Darksiders Genesis, Biomutant, Desperados III and via Deep Silver, are publishing Wasteland 3.

Must also add Focus Home Interactive as well because they have given me three games - Vampyr, A Plague Tale: Innocence and GreedFall - all of which were an 8.5/10 for me. Only negative is that there's nothing future wise thus far for me from them but I am hoping for Vampyr 2 next gen.

Both combined and individually are great for AA gaming.

I should have probably added that this game is also coming to Stadia.

I hope it doesnt flop, since Destroy All Humans! 2 is the real deal, the best game in the series by far.
Reactions: Cliff Underside

Didn't realize there were more screenshots of Santa Modesta and Rockwell but added them to the OP.
C

The first game was so mechanically unique and creative, and the sequel was even better. An early ps2 open world game that had with telekinesis, ragdoll physics, jetpacks, time stopping, bodysnatching and flying saucers set in the 50's and the 60's. Could there possibly be a better combination than that?

The remake looks a bit off though, I hope it doesn't make the same mistakes as the third game. That one basically killed the franchise, even before the studio itself went bellyup.
Reactions: diffusionx


That just leaves Capitol City which I'm sure they'll show off closer to release.

Otherwise, some older tweets compare the remake with the original.

Awesome. I worship the previous games. Let me have some more please. Day 1 (and onto my gigantic backlog you go. but I will play you, eventually)

Also thought I would clean up the OP a little by putting the art, screenshots etc. into spoiler tags.
Last edited: Jan 11, 2020
Reactions: Stitch and JimmyJones

Rhaknam said:
So much more detail. I like it.

Also thought I would clean up the OP a little by putting the art, screenshots etc. into spoiler tags.
Click to expand...
Looks like a remarkable improvement - but it still feels like it is a bit last gen. Regardless, I am so hyped to buy the game and replay it for the first time since it released!
Reactions: VysePSU

Yeah, I know it could look a little better graphically but seeing the gameplay has me super excited to play Destroy All Humans again. However, it does look really good in certain scenes like the sunset when the cop confuses Crypto's UFO for a new silo.

It should also be interesting to see the new mission in Area 42. I can already see myself free-roaming all six large maps like I used to back in the day after completing the story.

One thing I've noticed is the comparison GIF during the mission "Citizen Crypto" is set during the day in this remake instead of at night (when you disguise yourself as the mayor of Rockwell and hold a speech in front of the crowd). I remember in the original that the levels always had a set time of day.
Last edited: Jan 12, 2020

I don't remember where I first read it but I had it in my head that the remake would be out early 2020 when all we've really seen about the release date was just the year 2020. I'm hoping it'll be Spring or Summer 2020.

This is a screengrab of Santa Modesta taken from the short clip we saw a couple weeks ago. Definitely a noticeable difference in the graphics in this comparison. 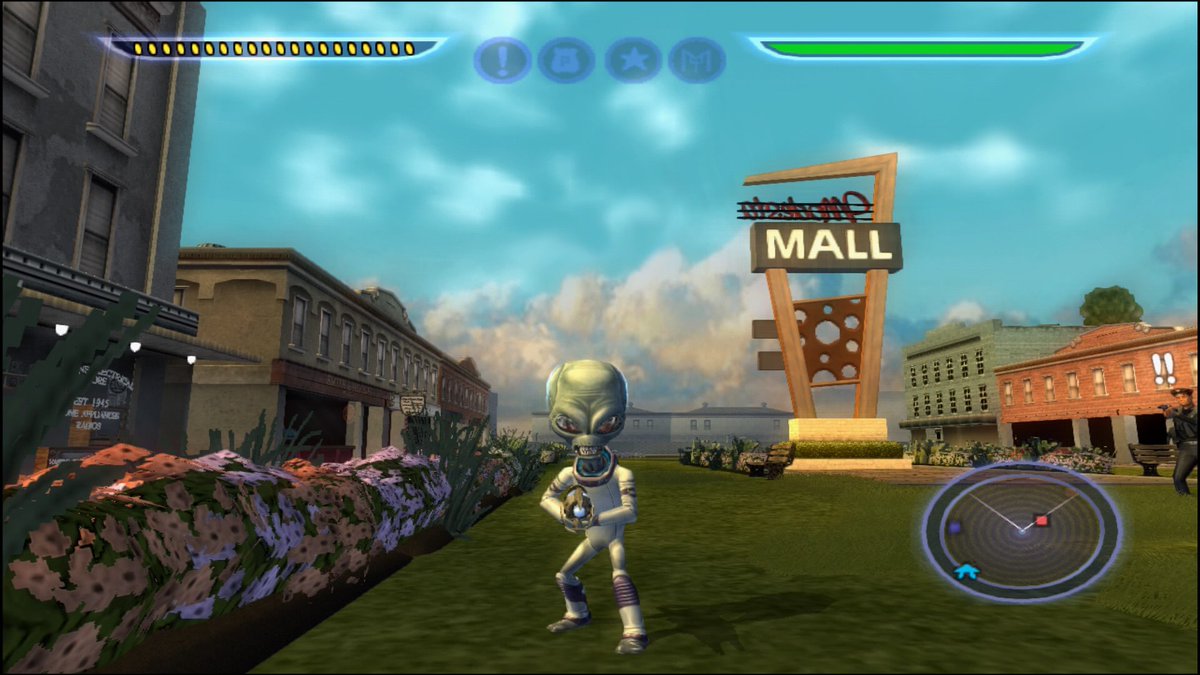 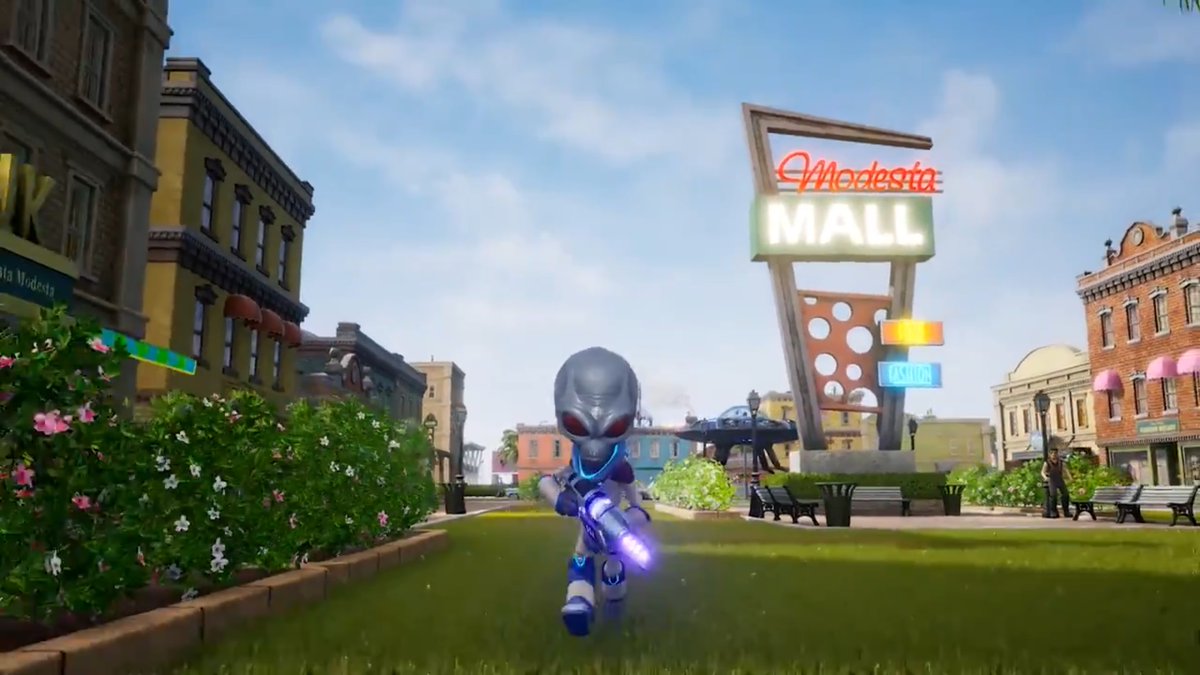 Should be interesting to see what the power suit soldiers look like in the remake too. 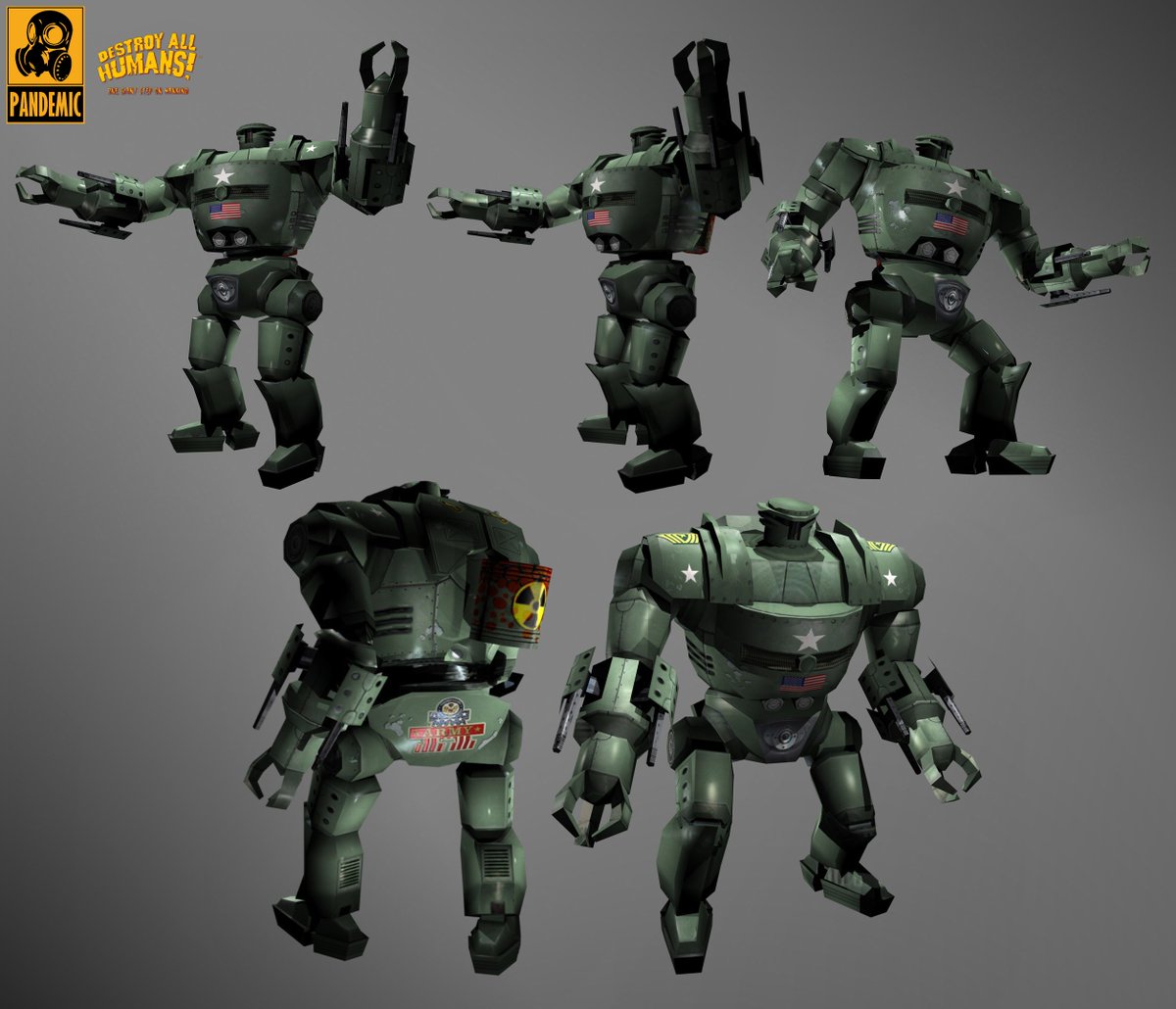 I like how you can better see your character model when disguised as a human this time around.
Last edited: Jan 25, 2020
Reactions: Stitch

The update is looking really good. I'm glad they are putting in the effort to "keep" the original 50's style but better
Reactions: VysePSU

Really looking forward to this. I hope this and Spongebob Rehydrated are successful for THQNordic so we will get more remakes on down the line.

My vote goes for the original Red Faction next.
Reactions: Cult of FartNoise and VysePSU

Cravis said:
Really looking forward to this. I hope this and Spongebob Rehydrated are successful for THQNordic so we will get more remakes on down the line.

My vote goes for the original Red Faction next.
Click to expand...
It's interesting because like this remake, Rehydrated will also feature cut content from the original.

As for Red Faction, I actually played the original last year. It was a fun shooter and kind of mind-blowing to me that it had such detailed destructibility.

How was the first game? I might buy it for my bro

The story is about 10 to 15 hours but much longer if you enjoy freeroaming the different levels after completing missions and disguising yourself as a human, causing destruction, and then doing your best to escape (without immediately returning to the mothership). I think it's a fun gameplay loop and there's a good sense of progression as you upgrade your abilities and weapons and become stronger.

The 1950s America setting and humorous dialogue from the NPCs when you read their minds are also entertaining. I would say if you're into aliens and UFOs and find the older alien invasion movies amusing that you'll really enjoy Destroy All Humans!
Reactions: Wait_What and Cutty Flam

I only ever played the demo of this on PS2 so I’ll probably pick this up!
Reactions: VysePSU

This is gonna be a lot of fun. Loved the original
Reactions: Branthrax and VysePSU

Cult of FartNoise said:
This is gonna be a lot of fun. Loved the original
Click to expand...
It’s definitely day one for me. Just need a release date!
Reactions: Cravis, Cult of FartNoise and VysePSU

Yep. I would love to see a new trailer and a release date. It shouldn't be too long now assuming they plan to release the remake within the first half of the year.

Another look at Santa Modesta:

Reactions: Cravis, Cult of FartNoise, waltyftmus Prime and 1 other person

The levels must have more than one time of day depending on the mission this time around since that's another comparison of Santa Modesta with different lighting. I wonder if this means we can choose whether to invade mid-day, evening or night for any of the six levels during free-roam?
Last edited: Feb 8, 2020
Reactions: Cult of FartNoise 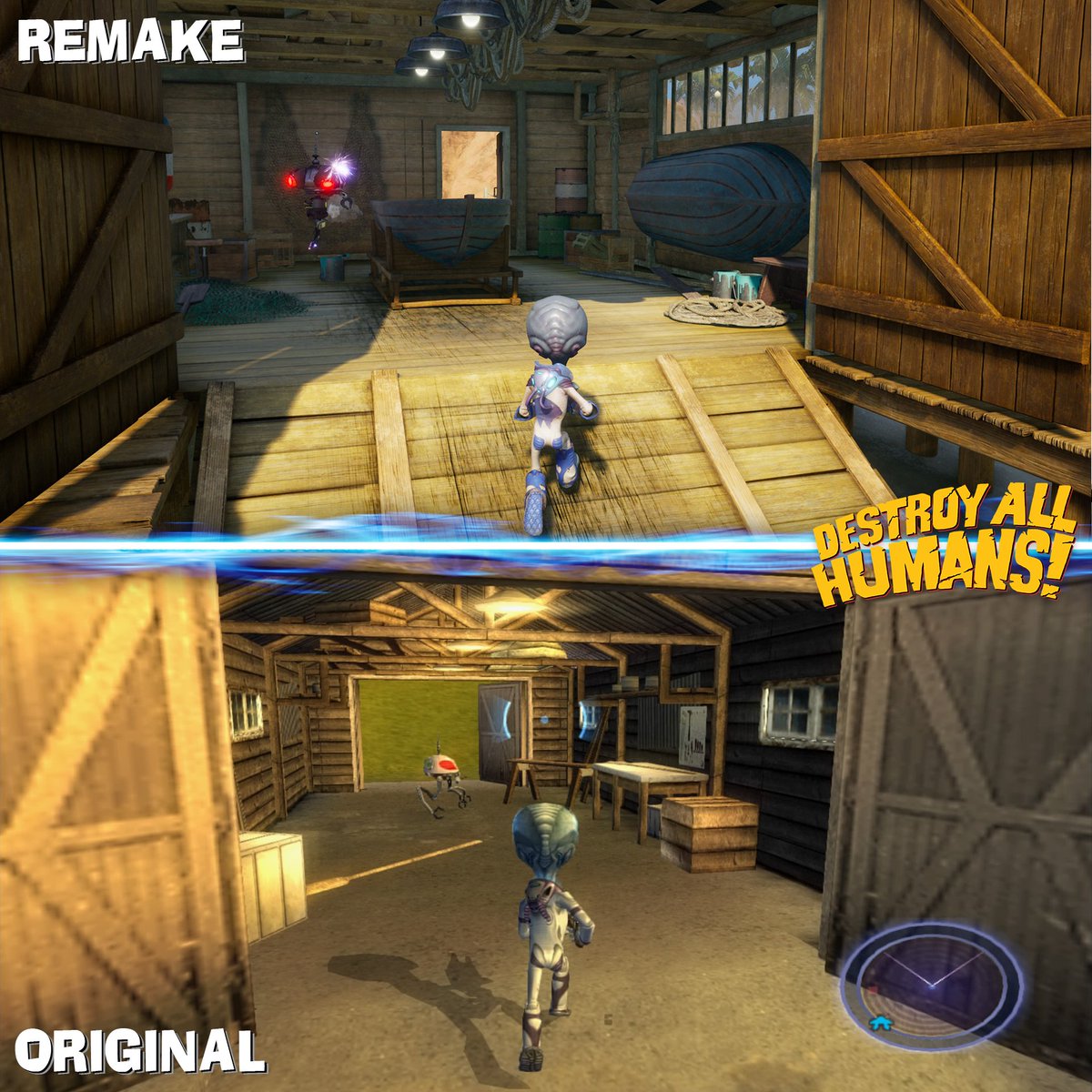 How popular was this series?, looks good.

I’m so looking forward to this, but nowhere is telling me a concrete release date other than December? They can’t be right can it...?

I’m excited for this. I played the demo back in the day but never got around to buying the full game.
Who wouldn’t want to play as aliens destroying the human race?

Likewise Stubbs the Zombie. That needs a remake!
Reactions: VysePSU, Cravis and laser_printer

Wow I went in blank this whole time but that looks like a great remaster.
Last edited: Feb 13, 2020
Reactions: VysePSU

Flintty said:
I’m excited for this. I played the demo back in the day but never got around to buying the full game.
Who wouldn’t want to play as aliens destroying the human race?

TheTurboFD said:
Dude I tell my friends this all the time. I had so much fun with Stubbs the Zombie and they've never heard of it.
Click to expand...
Had such an awesome soundtrack too with all the covers. 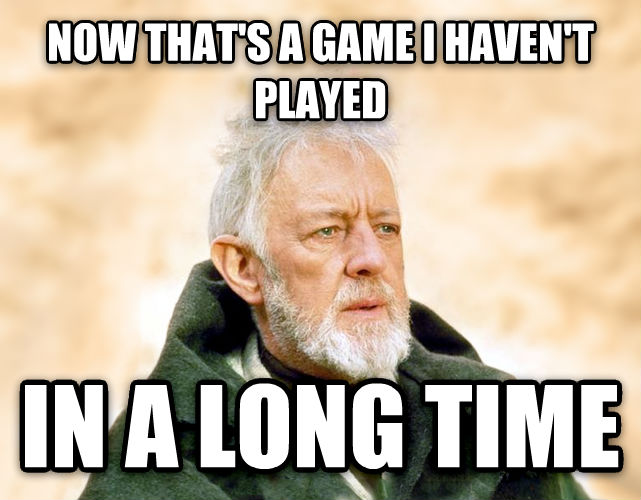 o'dium said:
I’m so looking forward to this, but nowhere is telling me a concrete release date other than December? They can’t be right can it...?

Click to expand...
We don't know the exact release date yet, only that it's coming out this year. If we take "just in time for its 15th anniversary" literally then possibly June 2020 but we won't know for sure probably until they release the second trailer.

I missed this one but someone else compared the Santa Modesta lighthouse area. 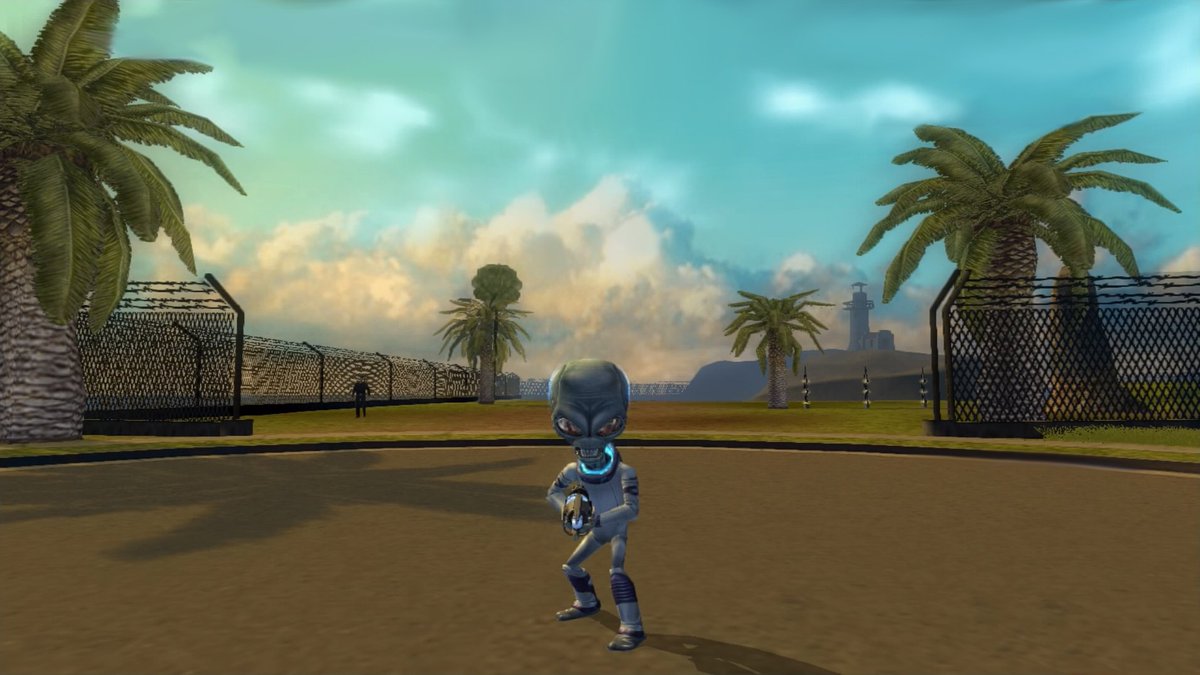 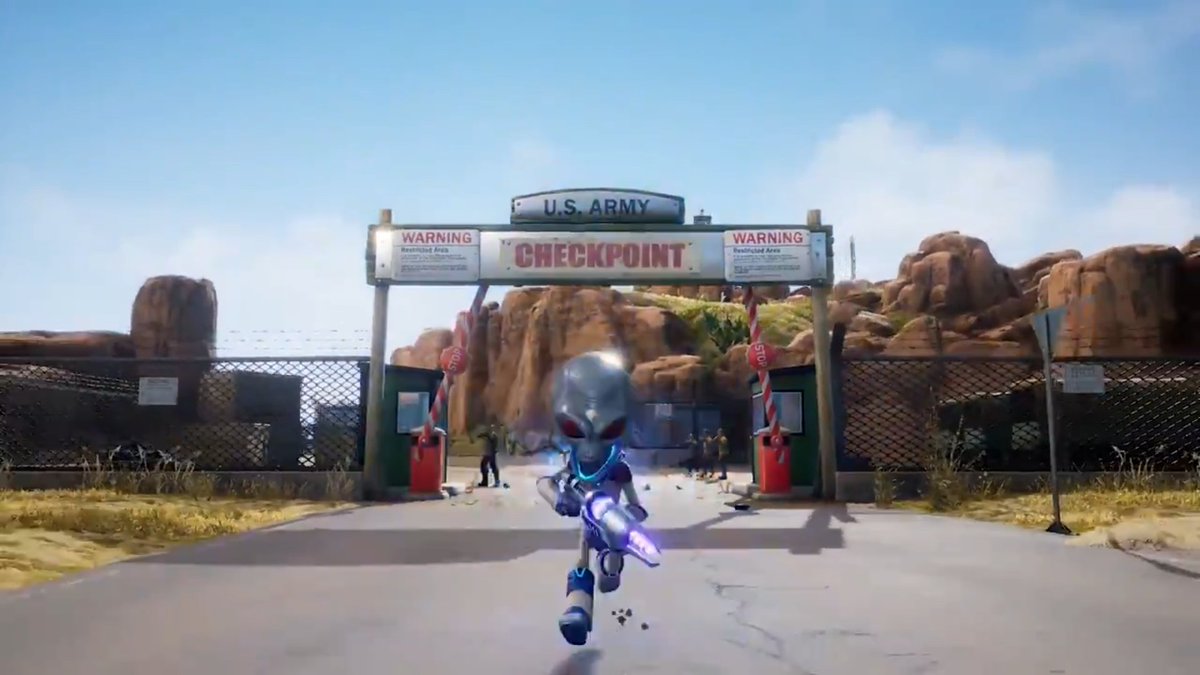 Not the best quality because it's another screengrab from the levels montage clip on their Twitter (see post #14).
Reactions: PPIMystaceus and Cult of FartNoise

Back to Turnipseed Farm with this one.