DmC: Devil May Cry is an unbelievably underrated game

What's up with this trend of people trying their hardest during covid to be hipster and bang the drum on deservedly buried games? Is the gaming drought really that bad?

Days Gone, Dragon Age 2/3, Biomutant....and now the opening poster is trying to convince us that the majority of fans and reviewers were completely delusional and DMC Remake was this underappreciated gem and all around solid experience.
Last edited: Jun 8, 2021
Reactions: Raonak

I thought about this for a while... The only hack n slash games I've ever liked were... Spartan: Total Warrior and the licensed LOTR action games. So I've very little to contribute here.

But I'm glad you had a genuine gaming experience, and that you decided to speak up about it.

Maybe I'll talk some day about how an ugly woman in a videogame made me gay *thoughtful wisethought*
Last edited: Jun 8, 2021
Reactions: Nemesis Prime

Honestly I'm still like fuck this game. The story and characters are worse than the original series. The fact that NT were a bunch of shitheels referring to Dante as a gay cowboy and this new Dante is hip and cool, made me say, "go fuck yourselves." The fact that combat was a complete downgrade compared to previous games (ie colored coded enemies and brain dead combat) and that Itsuno had to come to fix a lot of combat issues.

Ninja Theory is on the lower end of stylishly action games. They're more interested in smell their own farts than making a deep and cool action game.
Reactions: Zannegan, Keihart and Raonak
R

Atleast DMC2 was bad in an interesting way. Like it was worth experiencing how much of a downgrade from 1 it was.

It was a nice experiment and a great game. But DMC leans more to anime.

I liked DMC 5 but the series need to evolve.

I enjoyed the combat quite a bit, but wasn't a fan of the new art direction. I probably would have liked it a lot more if it was a completely different game instead of a DMC reboot. Still, all things considered, I'd score it a 7.5/10 overall.

april6e said:
and now the opening poster is trying to convince us that the majority of fans and reviewers were completely delusional and DMC Remake was this underappreciated gem and all around solid experience.
Click to expand...

Sounds like you have no idea what you're talking about, DmC PC currently sitting at 85 on metacritic, DmC DE PS4 83 metacritic 7.5 user score, 4.5/5 with 11k reviews on steam... but go on about how majority of reviewers didn't like it.

I don't know about under rated, the mainstream opinion is that is a good game.
Now if you ask the fan base, it's quite divided but also not pure "it's shit"

Personally, i don't like it. As ninja theory themselves said it, DMC was about what is "cool" and for me the reboot has nothing cool about it until Japan Capcom themselves go in there and basically revamped the whole combat, even then, no really enjoyable for me. 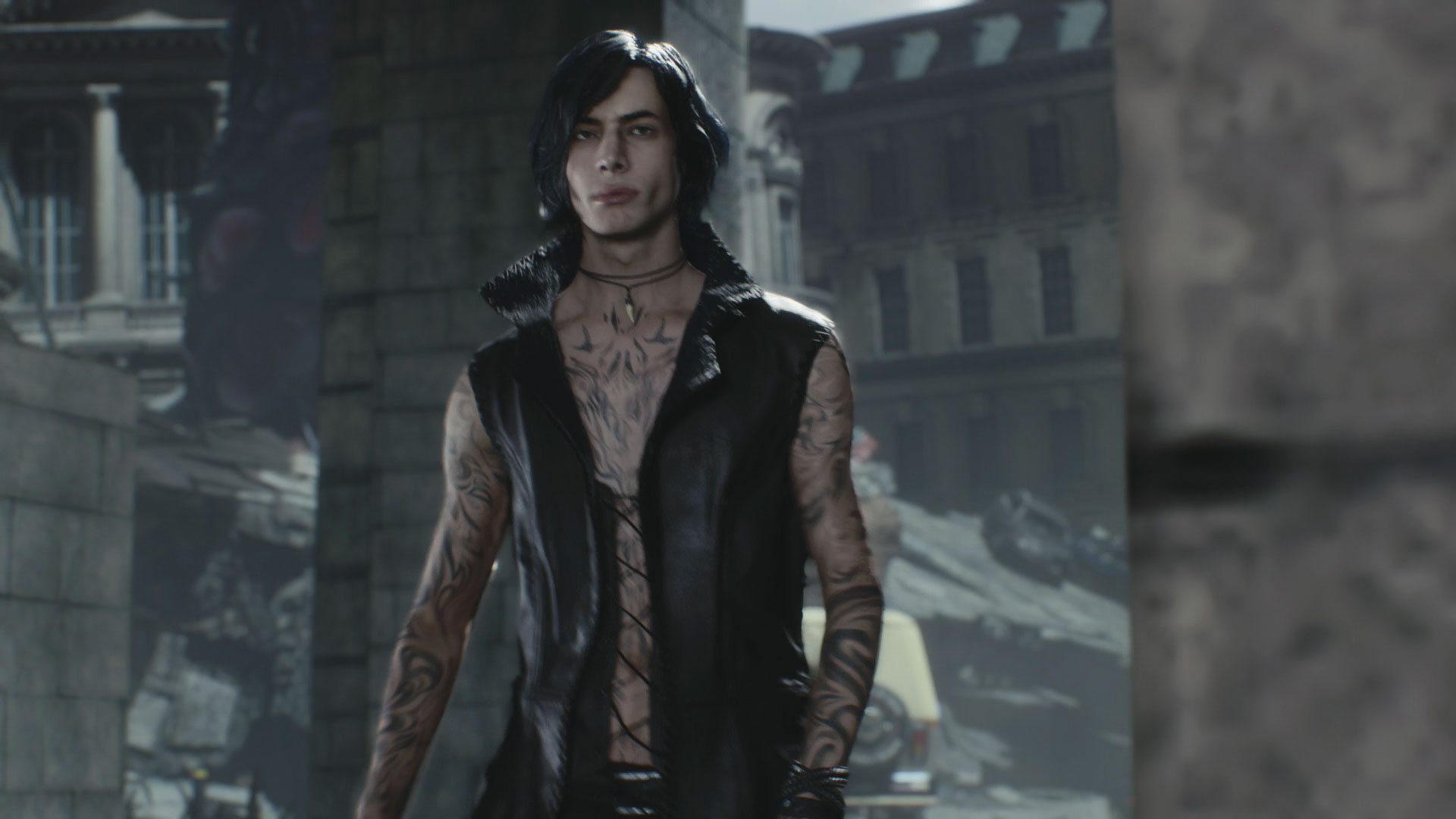 Sometimes I wonder if people here have been playing the same game, cant talk about "dark fedora wearing" when DMC 5 features budget Kylo Ren. Legit some of these comments on story and aesthetic are laughable considering its something the series is known for.
Click to expand...

Can't you really see the difference? V it's the most self aware shit, he fucking reads poetry while fighting, how can you take that and compare it with straight face fucking fedora wearing Virgil.
Reactions: RaduN and Nemesis Prime

april6e said:
What's up with this trend of people trying their hardest during covid to be hipster and bang the drum on deservedly buried games? Is the gaming drought really that bad?

Days Gone, Dragon Age 2/3, Biomutant....and now the opening poster is trying to convince us that the majority of fans and reviewers were completely delusional and DMC Remake was this underappreciated gem and all around solid experience.
Click to expand...

"What's the deal with people liking things I don't like? Must be a Covid thing because my opinions are absolute"
Reactions: MikeM
M

The game is average and mediocre in many ways, you can have fun playing it as you can in any good or bad game.

Not only the core DMC fans but fans of the genre in general thought of the game as really flawed.

Easy style rank up, no lock on, dumb floating devil trigger, dumb colored enemies, easy to exploit moves that kill bosses in 2 hits, holding triggers to swap weapons, multiple keys system to go to secret missions, bad enemy design, no challenging bosses, the weapons are randomly given to the player after boss fights with no connection. (You fight Bob Barbas and get ninja shurikens? what?)

PS3/Xbox 360 ran the game poorly, the PC version at least run the game at 60 fps but the pop-ins and bugs are still heavy on the game.

But there are always people that can endure problems and find a way to enjoy it, even for hardcore players. There are some mods mainly in the PC version that help a lot.

Raonak said:
Atleast DMC2 was bad in an interesting way. Like it was worth experiencing how much of a downgrade from 1 it was.

In technical aspects of combat DMC4 still have some advantages over DMC5, I was a "Nero main" in 4 and his moveset in 5 being mostly made of the same stuff with some differences here and there still felt lackluster, like half of his moveset works to "correct stuff" so you can mess up a combo sequence and just use some quadruple triple jump or dive move to kinda fix it.

Level design in 5 is also kind of uninspired, I've played the four previous games back to back a bazillion of times so I kinda miss the levels trying different stuff. DMC3 still has a more solid level design and better bosses.

There is also the problem that the game is too easy, even on Hard as near every enemy is brain dead. And barely any content, where are the unlockable outfits? different and unique new modes? We cant even play every level as the character we want, something that is basically 0 effort from a development stand oint.


In this matter of fact I really believe Bayonetta 1 and 2 and even DMC3 and 4 made level design/enemy design/unlockable content better.
Reactions: RaduN

DmC is an easier pill to swallow now that DMC V exists, the alternative reality where we would have a DmC 2 instead of DMC V would be awful. For what it is it's DmC SE is decent but a major downgrade from DMC4 and an even bigger from V, since unlike 4 that game was actually finished.
Last edited: Aug 5, 2021
Reactions: mrwhatever

I read Devil May Cry (I thought the original), then …. I see DmC in front.

It was a nice game but not a Devil May Cry.
M

I really enjoyed it. I have played all the DMC games and found this one different in a good way (story and all). I'm sad they didn't run with this as a different universe DMC world. I can see them both co-existing.
Reactions: makaveli60

It was the first Devil May Cry game I played, well the demo for it was. Based off the demo (and subsequent reviews) it seemed way too easy for an action game and I wasn’t impressed. I ended up buying the DMC HD collection and DMC4 on 360 instead and had a blast playing DMC1, 3, and 4. In a way it was good because it got me into the series, but it’s probably the second worst game in the franchise.

The bread and butter gameplay/combat is rather good, but everything else kinda sucks to varying degrees. The story is just bad and changes too much of the lore. Dante is supposed to be Half Demon Half Human as a theme of the goodness in people overcoming where they may come from/their past. In DMC he’s Half Demon Half Angel and it comes across like some high schooler trying to write Shakespeare.

Not to mention the completely hamfisted “capitalism bad” themes strewn through the game (it unironically copies Futurama’s Slurm episode and plays it completely straight). It also completely changes the characters of Dante and Vergil to be mostly unlikeable assholes.

Gameplay wise the boss fights pretty much all suck and aren’t challenging or interesting at all save for one of the early ones, and the DLC where you play as Vergil is just meh. It’s such a shame because they did nail the general combat and that’s pretty fun. Later in the game though they introduce color coded enemies that completely ruin the flow of the combat and put a damper on it, which sucks.

Of course this is all my opinion, but based on playing all the games a half dozen times on multiple systems (I have all of them on Xbox One now).
Last edited: Aug 5, 2021

Not really. The only DMC its better than is DMC2. Boss fights are bad.
You must log in or register to reply here.