mrkgoo said:
In my opinion, your shots posted above seem a little 'unnatural' to me. I realise my hypocrisy in saying that, as photography is not about capturing things naturally (and certainly, a standard JPEG is nowhere near what would be considered natural - just what is considered 'accepted').

I concede that your first shot may be aiming for something more artistic. The second shots is nice, and I like it. Both, though seem a bit oversaturated for my liking. Admittedly, noone ever sees the same pictures on the internet. Calibration of my panel and yours, viewing conditions might be exacerbating any issues.

I may yet get into it all one day, however. (When my photography is up to snuff!)

Radiantdreamer: On that note, I wouldn't worry so much about RAW at the moment - use it when you think you are ready. Learn about your camera, and above all, have fun! If you ever find it overwhelming, pull back a bit - taking pictures should be the first priority.
Click to expand...
I have to agree with mrkgoo. I've seen may HDR images, and a lot of them try to go for this sort of "CG prerendered" look. It's unnatural looking, but artistic in a sense. However, I think wiicast, you've kind of overdid it. The saturation looks way too high, and the image seems a little ... "messy" for a lack of words to describe it.

This one that I randomly googled, looks great. 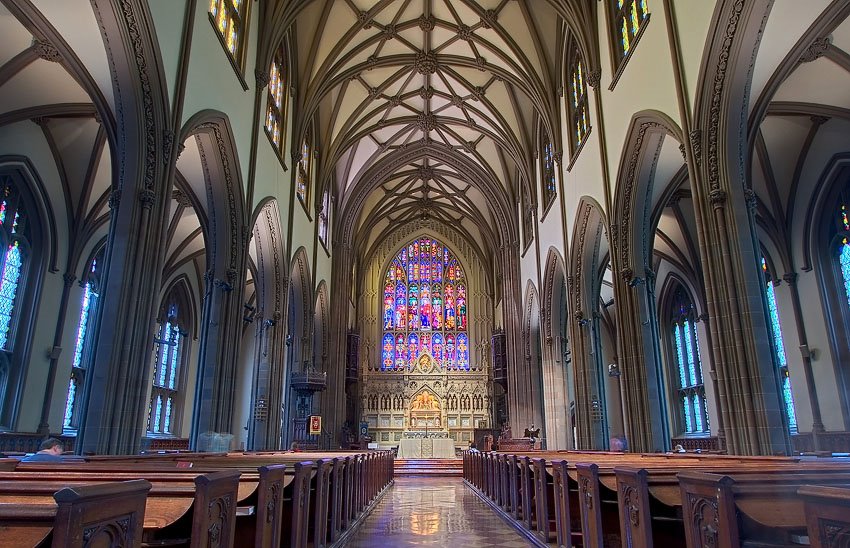 As does this more artistic one.

Though HDRI looks great, I have to say, that it tends to flatten out everything. The shadows sort of disappear.
R

If I remember correctly, you're the guy who like to take pics of his anime figure collections and composite them onto real life backgrounds, right?

Since your subjects aren't alive and moving around (like bugs), you can probably get by with the Canon 60mm 2.8 lens (about $350).

Also, since your subjects are still, you can use a long shutter speed to increase your exposure rather than using a wide aperture or a high ISO. Remember now, there are advantages and drawbacks to using low or high values for the three things that affect exposure: shutter speed, aperture, and ISO.

(let's assume that both shots were taken with a tripod)

These two settings will give you pretty much the same exposure, i.e. they will have nearly identical brightness values. The differences is that Photo A will look better (in the sense that it has better detail, less noise, and more stuff in focus).

Lower ISO produces photos with less noise and allows the camera to capture more detail. Shoot at the lowest ISO you can get away with. Higher ISO increases the camera's sensitivity to light, but at the cost of more noise.


A smaller aperture (larger f-stop value) ensures that more of your subject will be in focus, and that it will be sharper too. In general, lenses are sharper if you shoot them at a smaller aperture (up until f11 or f13 or so on 1.5 digital crop sensors).

Now we come to shutter speed. A slower shutter speed lets in more light and gives you a brighter picture. Simple enough. However, when photographing moving subjects handheld, a slow shutter speed gets you blurry pis since the subject or your shakey hands were moving around during the exposure.

Since the negatives of a slow shutter speed are negated due to the tripod and motionless subject, we are free to make the shutter speed as slow as we want without consequence. Therefore, we can adjust the aperture (small aperture/high f-stop value) and ISO (low ISO) to make for a nicer (but darker) picture and slow down the shutter speed to brighten the photo back up again.

When you are comfortable with these principles, then you may want to get more complex with macro boxes and small flashes.

Don't try to digest this all at once. It's very complicated.

My advice is that for now, you go out and buy the Canon 50mm f1.8 lens right now for like 90 bucks and take a lot of pictures. There's no zoom, but like I said before, photography is about sacrificing in some areas for gains in others. The lack of zoom will give you a really sharp lens, a lens that has a large maximum aperture (f 1.8), and a cheap price.
Click to expand...
Yup! I'm the guy. Taking shots of still subjects isn't too much of a problem. I do use my camera for normal everyday photos too, but it seems that PVC figures are a good place to start practicing.

Luckily I do have a tripod, but I've found using it very cumbersome, and limiting with the angles I am able to use. I'll definitely try doing a crazy high exposure shot with low ISO and aperture with a tripod though.
J

I have a Rebel XT with the standard factory lens, a 50mm, and a 75-200mm telephoto. If I wanted to get a clear photo of the night sky, how long would I need to set the shutter speed?

Thought I'd throw in my two cents:

- 90 per cent of the work in most digital photography is in composition and preparation.

- I think it helps to do a lot of picture research in photography and design magazines to determine exactly what it is you want to capture. If you fancy yourself an independent artist with unique ideas, then by all means don't bother with any of that, but I find it most useful when I can spot an image I really like that I want to adapt to settings, colors, people, themes and so on that I have available to me; and then I consider how I can do that with my equipment

- Get yourself one decent prime lens (the 50mm f/1.8 is a great all-purpose lens) and learn to use it well. Personally, I feel that zoom lenses are counter-productive to learning because they encourage laziness, impatience and the whole "spray and pray" shooting style that digital photography engenders. Prime lenses will force you to put more consideration into constructing your shots.

- Once you're satisfied that you've learned enough from your 50mm, you should have an idea of whether you're like a wide lens or something with longer reach.

- A lot of mention has been made of aperture, shutter speed and ISO sensitivity. I think it's also important to get the white balance right. It can completely change the tone and mood of a photo and it'll save you a load of headaches in post.


JzeroT1437 said:
I have a Rebel XT with the standard factory lens, a 50mm, and a 75-200mm telephoto. If I wanted to get a clear photo of the night sky, how long would I need to set the shutter speed?
Click to expand...
Sit it on a tripod, hook up a remote trigger, set it to low ISO, tiny aperture, set shutter speed to Bulb; then experiment with holding the shutter open for 5 minutes, 10 minutes, etc.
V

affableamerican said:
Have to quote this. DSLRs are complex pieces of engineering, and there is a lot to learn. After several months with my XSi, I get far, far fewer off-focus and soft-focus shots. Which is to say, I'm finally getting close to the actual mis-focus rate of the XSi and lenses that I'm using and reducing the user error.
Click to expand...
Auto-focus problems seem to be fairly common amongst new XSi users. Newer cameras are marketed as having "multi-point" AF systems, which sounds great and all, but it really doesn't mean anything  the user should be telling the camera what to focus on, not the other way around. A lot of people don't realize this and end up with poor images.

OP, if you aren't already, make sure you're using a manually selected AF point. Otherwise, you might end up with soft-looking images.
M

vatstep said:
Auto-focus problems seem to be fairly common amongst new XSi users. Newer cameras are marketed as having "multi-point" AF systems, which sounds great and all, but it really doesn't mean anything  the user should be telling the camera what to focus on, not the other way around. A lot of people don't realize this and end up with poor images.

OP, if you aren't already, make sure you're using a manually selected AF point. Otherwise, you might end up with soft-looking images.
Click to expand...
Ooh ... good point! I always have centre-point focus, so I tend to forget this. Multipoint focus is often touted as a marketing point for SLRs, but I probably won't find a need for them as much, as my style of shooting doesn't warrant their use that often.

They do have their uses, though. For narrow DOF or macro shots, sometimes focus-recompose is a poor technique so alternative points are a blessing. Same with tracking shots on a moving subject.

I hardly ever focus manually, but I suppose having all points active while manually focusing is useful to know exactly where you have focused (well, according to the camera).
R

vatstep said:
Auto-focus problems seem to be fairly common amongst new XSi users. Newer cameras are marketed as having "multi-point" AF systems, which sounds great and all, but it really doesn't mean anything  the user should be telling the camera what to focus on, not the other way around. A lot of people don't realize this and end up with poor images.

OP, if you aren't already, make sure you're using a manually selected AF point. Otherwise, you might end up with soft-looking images.
Click to expand...
heh, OP's name is radiantdreamer.

Yeah, setting the AF point was one of the first things I did. AF has been a huge gripe for me (especially with my POS, er PAS camera), hence why I decided I wanted a dSLR for MF usage.

While having multi-point AF does have its advantages for quick shooting, it isn't necessary with a simple focus lock really.
A

I'm thinking about getting a 5D Mark II for my brother's graduation. Can anybody recommend an all-purpose zoom lens that would be a good companion to the camera? For my Rebel, I only have the stock 18-55 mm and two primes (100 mm f/2.8 and 50 mm f/1.8 II), which he's welcome to borrow anytime but I'm guessing he'll need a better lens to do justice to the camera. I'm not sure what my budget will be, but I would be very grateful if you could give me recommendations in two tiers: under $1K and under $2K. Thanks!
N

i think the absolute best will be the 24-70mm f/2.8L, you should just get that w/o a thought (may wait for the spring discounts). it's a 2K lens selling for 1K now. no brainer. barring that, the 24-105mm f/4L is a great all rounder for outdoors, a bigger range and is a bit cheaper...but if you wanna shoot a graduation ceremony...in a dim hall, it wont suffice.

i'd suggest the 24-70mm for versatility and the 135mm f/2L (its a prime, but it's one of the best lenses in the whole world) for inside portraits of that ceremony. you cant go wrong.
A

Well, I meant that the camera would be given to my brother as a graduation present, but those are solid recommendations. I'll look into them!