So hyped for this.
T

sakipon said:
You could always buy another 3DS for gaming if you want to keep the special one in box (perhaps look into second hand market?). Otherwise you're missing out on many great things, pal.
Click to expand...

Yeah, i will most likely get a 2nd 3DS somewhere down the road that i can play with The price is affordable, so it is more a case of priority for me. I always liked 2D sprite games, so it is nice that they are still being made, and i want to support that.
D

kanugo said:
Great, great news! The 3DS is going to have an epic year.
Click to expand...

Srsly, best lineup of all the systems so far.

This already sounds so much more interesting than Epic Mickey 2. Monster Tale was pretty decent, so this could work out nicely.
D

Like, if you told me this game was going to exist a week ago, I would think it was some fan's bullshit rumor. It is doing everything right so far.
A

I just played through Castle Of Illusion last weekend, it's one of those classics I always come back to - easy to play, still challenging in parts.

I'm kind of scepticle they could do anything like the original game, but I hope they prove me so wrong! Just the existence of this game makes the $70 (CE) I spent on Epic Mickey more then worth it.
A

I've never played the Mickey Mouse Illusion series, I've only played the Magical Quest on SNES. Does it play anything like that?

Apenheul said:
I've never played the Mickey Mouse Illusion series, I've only played the Magical Quest on SNES. Does it play anything like that?
Click to expand...

Close, but instead of gimmicky costumes, its just pure old-fashioned platformer!

I love this game so much I am replaying it on my head... Killing the sweet dragon now btw.
S

The hand-drawn sprites in Power of Illusion are extremely compelling, and, thanks to scrolling parallax backgrounds (a heavily-used graphic technique in the days of 16-bit gaming), reportedly look great in sterescopic 3D. Even better, every level in the game is based on an animated Disney adventure, from "Sleeping Beauty" to "Tangled" and lots in between.
Click to expand...

This is the best news ever.
E

Someone indicates the features in the thread title, everyone should know!
P

but more interestingly, it's also a follow-up to Castle of Illusion Starring Mickey Mouse, a 1990 game for the Sega Genesis!
Click to expand...

Apenheul said:
I've never played the Mickey Mouse Illusion series, I've only played the Magical Quest on SNES. Does it play anything like that?
Click to expand...

Same. I've only played Magical Quest on the SNES. Really enjoy that and I think I still have my copy of it. Hard to get really excited about a new Illusion game to be honest. I simply want Epic Mickey 2 and which ever one is the true sequel will likely get bought.
E

BobbyRobby said:
Can someone confirm if all the following are unique games?

I only have the Master System Castle game, which I really like. Are the others worth getting?
Click to expand...

Already answered earlier in the thread but Yes all those are different games, both "Castle of Illusion" games are different. 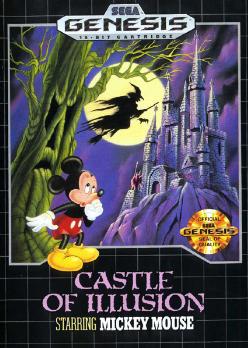 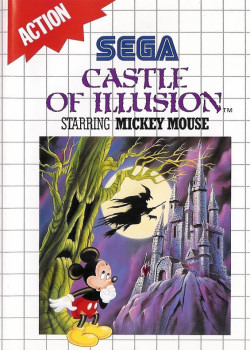 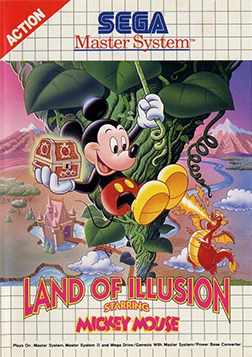 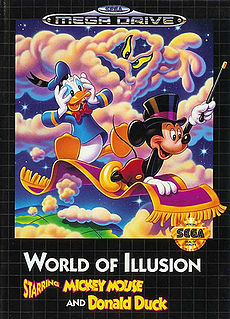 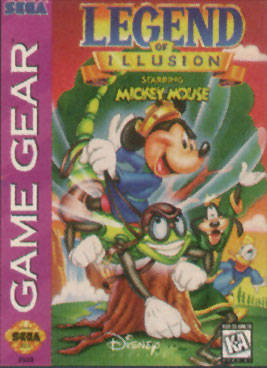 Those ^ are the 5 unique games in the Illusion series.
Personally I've never played "Legend of Illusion", I hear it's not quite as good as the previous titles.

AniHawk said:
what did dreamrift do? were they the hatsworth guys?
Click to expand...

fernoca said:
Yeah. Their site's back online.
Though no word on new projects and only list 'Monster Tale' as their first game as a team; the site also lists games members of of the team worked:

Peter Ong is a veteran game developer with over a decade of professional experience. He has driven game development both as a Design Lead and Producer on a broad range of team structures ranging from a modest team of under 20 people, to a team with over 150 people and a 20+ million dollar budget. Peter is responsible for the creation of innovative and acclaimed action-adventure titles such as The Red Star, Vexx, and Henry Hatsworth in the Puzzling Adventure, as well as high profile licensed titles such as Superman Returns: The Videogame for major industry-leading publishers Electronic Arts and Acclaim Entertainment. For his most recent work of directing the award-winning game Monster Tale, Peter was named one of the Top Ten Designers of the year in Game Developer Magazine. Having worked in either Designer or Producer positions for the full-cycle of development from pre-conceptualization to final production on every game he has been involved with, Peters ability in both creative and business/production roles has lead to the successful shipment of every title he has worked on.

Ryan Pijai is responsible for overseeing all technology development for DreamRift. Ryan received his Computer Science Bachelors and Masters degrees from Cornell University, where he graduated Cum Laude with Honors at the top of his class. He brings with him a wide range of professional industry experience including Lead Programmer at Electronic Arts, the worlds leading video game publisher, as well as Tools Programmer at Autodesk, the makers of AutoCAD and 3D Studio Max. Additionally, Ryan has handled AI, Graphics, Physics, Sound, User Interface, and Gameplay programming for multi-million selling sports games, next generation open world action games, and handheld games such as his most recently completed project as Lead Programmer: the original intellectual property Henry Hatsworth in the Puzzling Adventure for the Nintendo DS.

I'm a little bit concerned about how they will mix 2D platforming with stylus usage; will it end up being something like Canvas Curse, for example? Or maybe more like Castlevania Dawn of Sorrow where you alternately use the stylus to draw stuff and buttons to control Mickey.

For "purity" sake, I would prefer the latter, but then it risks becoming too cumbersome.
(edit: hrmm ok, "tapping icons" makes it seem like it will be alternating stylus usage)

Either way though, that a proven DS developer like DreamRift is working on the game, along with the hand-drawn art morsel, I'm mostly feeling the same as you guys.

I was thinking, and it would be great if they used an art cover for this game inspired in the original one. Nostalgia overflow.
G

Power of Illusion will make heavy use of the Nintendo 3DS's stylus. By tapping the item icons exist in every level, you'll be able to "paint" (trace) those items into existence, including cliffs, cannons, and floating platforms. The more precisely you trace, the better for Mickey. A flawlessly-painted canon will only damage Mickey's enemies, for instance, but if you mess up the painting, the canon will be a danger to everyone in the area.
Click to expand...

In other circumstances I would be extremely annoyed with this, but considering how well used was the touchscreen in Henry Hatsworth there's nothing to worry about.

Anxious for the first screenshots!
C

Ok, I'm sold. I didn't give a crap about the console version to begin with. This is now THE Epic Mickey to pay attention to.
V

I had Castle of Illusion for the Game Gear and was amazing.
I remember all the OST perfectly and some themes were the same as the Genesis games (but they were diferent games, as stated before)

And my favorite, the Castle Theme
T

Speaking of which, I still need to track down and buy this studio's previous DS game.

This sounds too good to be true. Too good!
F

Screens?! I need a trailer on my 3DS!

kanugo said:
Screens?! I need a trailer on my 3DS!
Click to expand...

Hehe, not really. Imagine it as an "Announcement Trailer". Glorious 3D with gorgeous detailed graphics.

Sounds better than the other Epic Mickey 2 to be honest.
I

Aren't all the screens on NP from the Epic Mickey 2 (PS360Wii) game?
M

Vitet said:
Aren't all the screens on NP from the Epic Mickey 2 (PS360Wii) game?
Click to expand...

No. There is a separate article for the 3DS game judging by the cover.

kanugo said:
Hehe, not really. Imagine it as an "Announcement Trailer". Glorious 3D with gorgeous detailed graphics.
Click to expand...

A trailer would be amazing, hopefully we get one really soon. This is going to be good!


Vitet said:
Aren't all the screens on NP from the Epic Mickey 2 (PS360Wii) game?
Click to expand...

Supposedly there are some screens for the 3DS version, which according to people who have seen them, look great.
I

Mhhm, there's about 6 screenshots in Nintendo Power. Along with some Concept Art.
J

Just got the new NP. This game looks so nice.

I wish I had a 3DS to play this game.

And considering the PSWii60 version doesn't look particularly interesting, this should end up as the best-selling version. If it doesn't, there's something very wrong in this world.
Z

joedick said:
Just got the new NP. This game looks so nice.

SOMEONE DOES THAT ILLEGAL THING, SO WE'LL FIND THE IMAGES AAAAAAARRRRGH.
S

I cant believe people get hyped in here. It's gonna suck guys, face it
Z

Way to be positive...god.
T

The details in the OP seem really good;
It's the sequel to a loved game;
People who already watched the screens on NP are saying it looks really good.


It can turn out an awful game, but so far I'm hyped as hell.
C

I'm mega-hyped but the "heavy use of the stylus" bit has me worried.

I'm not a fan of using "L" as a jump button and stylus jumping would be 10x worse. :S
L

Ericsc said:
HYPE! I need to see those screenshots!

Here are some from the Genesis game

the music in that forest stage was really scary

This was actually the second videogame I bought in my gaming career.
You must log in or register to reply here.