Eric Trump is slamming a Forbes report that alleges his charity, the Eric Trump Foundation, has been funneling donations -- from donors who believed the money was going to St. Jude Children's Research Hospital -- to the Trump Organization by paying high sums for use of Trump properties during fundraisers and re-donating some funds to charities friendly with Trump interests.

Forbes reported Tuesday that the Eric Trump Foundation paid the Trump family business hundreds of thousands of dollars over the last seven years for use of one of the organization's golf courses, funds which he claimed were being donated nearly in full to the children's cancer charity.

"We were able to come up with this concept of raising a lot of money with really no expense and it's because we were incurring the expenses at the assets we were taking on the expenses as Trump. We were using our own facilities," Eric told donors in a promotional video.

According to IRS filings, the Eric Trump Foundation in 2012 spent $59,085 on its annual Golf Invitational fundraiser held at the Trump National Golf Club in Westchester County, New York -- money that skimmed from donations to St. Jude's Children's Research Hospital. Those expenses ballooned to $230,080 in 2013 and to $242,294 in 2014, according to the filings. It is unclear from these tax forms how much of those payments went to the Trump Organization.

Forbes reported that in 2011, costs for Eric Trump's golf tournament fundraiser tripled because his father realized that the organization had not been charging for the event and there were no bills to prove it. The Foundation declined to provide Forbes with an itemized list of expenses for the tournament.

Charity experts told Forbes that the amount paid to the Trump Organization for a golf tournament fundraiser for St. Jude's "defy any reasonable cost."

The increased costs for the tournament coincided with changes to the Foundation's board in 2010, when it changed from being made up of mostly Eric's personal friends to those closely connected with the financial interests of the Trump Organization, according to Forbes.

The tax filings also show that the Eric Trump Foundation made a 2014 payment of $87,665 to another Trump property, the Trump National Golf Club in Washington, DC for fundraising events.

In addition, the Forbes report claims that Eric Trump's charity redirected some donations. More than $500,000 was given by the Eric Trump Foundation to other charities, "many of which were connected to Trump family members or interests," according to Forbes.
Click to expand...

And as Forbes points out in its report, ”Altruism as a business-development strategy isn't necessarily illegal. But a situation in which outside donor money is redeployed away from the core mission in ways that seem to ultimately benefit the family that pays the majority of the board is -- at best -- an appearance problem."
Click to expand...

Off course he did.
A

I love this story. All stories looking into the Trump family all at the same time is glorious.
D

I think we had a thread about this already. Unless this is a different case.
R

I mean what else can you do but shake your head at this point? These people are scum, I'll never understand why others wanted to assume the best of them behind closed doors when there is so much shit out in the open to see.
T

These reporters aren't even human, where are the morals!?
E

So this is just a pattern with the family? Literally skimming money from the most sympathetic and disenfranchised sections of modern society?
G

"Moralitys just gone, morals have flown out the window, and we deserve so much better than this as a country.

already had a thread on the Forbes story
S

something something not even people
F

well there it is
T

EdibleKnife said:
So this is just a pattern with the family? Literally skimming money from the most sympathetic and disenfranchised sections of modern society?
Click to expand...

The family is riddled in debt.

big ander said:
already had a thread on the Forbes story
Click to expand...

Apologies-I searched for "Eric Trump" and that didn't come up.
G

"I don't consider the Trumps are people or human", I think thats something Eric would say
K

New York State Attorney General Eric Schneiderman is looking into allegations of self-dealing by the Eric Trump Foundation that were raised by a recent Forbes report.

Schneiderman was already investigating the Donald J. Trump Foundation for whether or not the president personally benefited from the fundraising efforts and spending of the foundation before the inauguration.
Click to expand...

Fucking really? Stealing money from a children's cancer charity. Did he run a bus full of nuns off the road for Lunch?
T

From all sides
Z

If found guilty by New York, he can't be pardoned by Trump either.
S

Good. The trump name needs to be fucked for eternity.
O

SlickShoesRUCrazy said:
Good. The trump name needs to be fucked for eternity.
Click to expand...

Yep. Trump put himself out there and ruined the Trump name for the future.
S

Trash is of a human being
G

He should have funnelled that money to a plastic surgeon.

Not surprised, but glad this got discovered.

This entire family of mongrels need to die in prison. Corrupt, vile, dangerous. This needs to happen before Barron Trump gets fucked in the head.
C

It really is a gross story.

Taking money meant for children with cancer and paying yourself with it. How low can you go?
W

If that's the case I still want the dumbfuck to try it. Might make at least a couple of his delusional followers realise who it really is they love.
O

Drain the swamp, Turn it into a sewage pit. I like your efficiency America.
B

Irony that it was legit for the first couple of years then Trump realised they were being charitable and then felt the need to fleece charities because fuck you that's why. Sad
R

The true cancer here is the Trumps.

Not surprised in the least but disgusted in the most.
R

WhateverItTakes said:
If that's the case I still want the dumbfuck to try it. Might make at least a couple of his delusional followers realise who it really is they love.
Click to expand...

I could see him trying more intimidation tactics that would once again bring up potential obstruction of justice charges.
Z

The fact that daddy Trump made Eric pay more than standard rates for using his golf course when he found out how successful the charity tournament was just highlights, once again, how greedy, immoral, and unfeeling Trump is.
R

Hopefully criminal investigation, ags are notorious for not having he stomach to prosecute charity frauds like this on a personal criminal level.

I guess Ivanka is the true chosen one.
A

It's another money laundering operation.
W 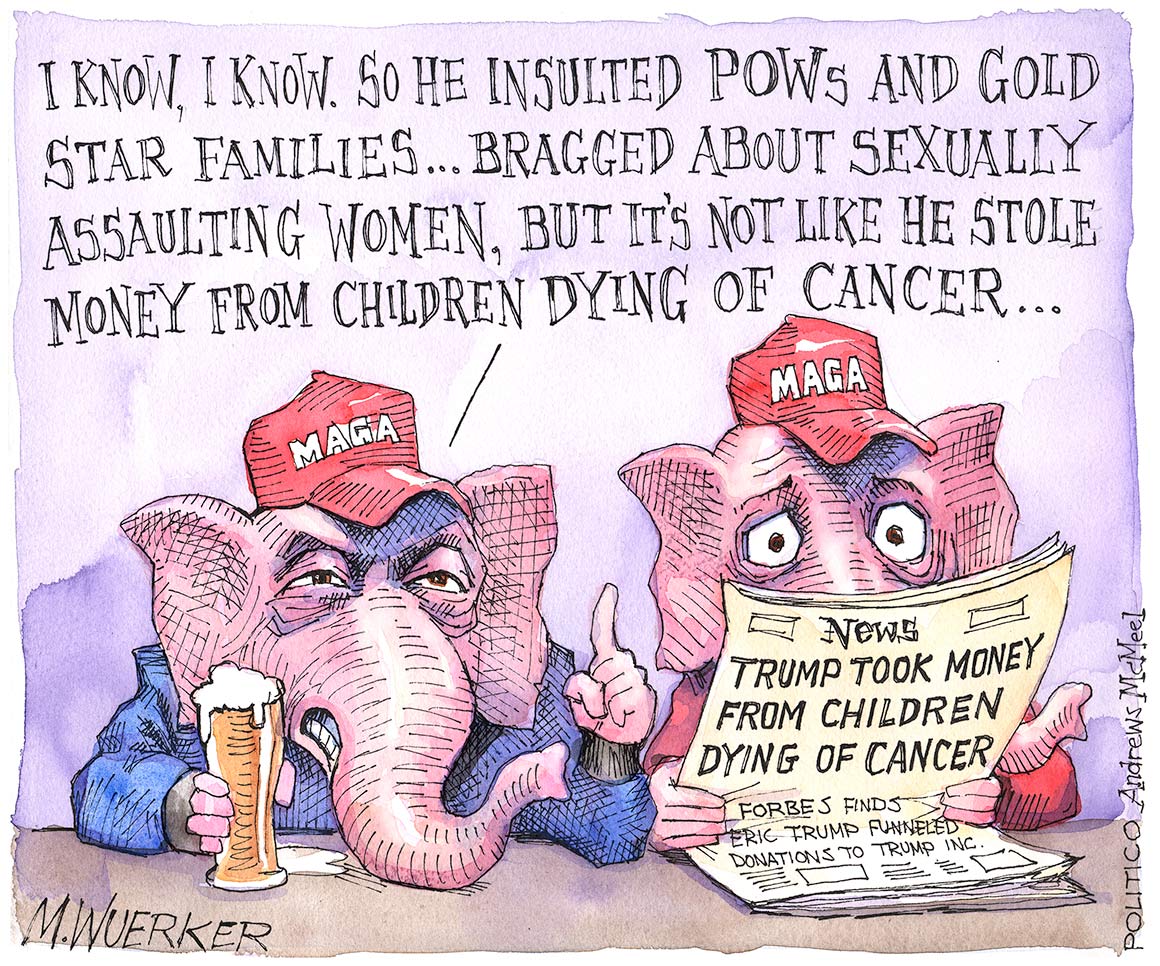 If he actually gets arrested, expect calls from Donald about how New York is holding his son hostage.
J

Now we wait for the news on Tiffany Trump.
E

He doesn't think of them as human anyway.

So what would be the charges & punishment if it happens here?
B

Jarrod38 said:
Now we wait for the news on Tiffany Trump.
Click to expand...

Tiffany is the good one - the anomaly.

Our Saviour.
You must log in or register to reply here.

SolarPowered replied
Jun 7, 2017
Why do you donate blindly, without knowing where your money goes to?