The image was spotted by Ubisoft Montreal employee Azaïzia Aymar, who works as Assassin's Creed's head of content. So you'd think he would know what he was talking about.
Click to expand...
Assassin's Creed IV:

ND really needs to have a talk with their artists about their reference material. They've been called out on stuff like this several times now, both for environment art and character likenesses. Hopefully this gets sorted out quickly.

In our eagerness to get the story trailer out we made a regrettable mistake and didn&#8217;t thoroughly vet the art work used for an in game painting. We&#8217;ve already updated the trailer. We hold all artistry in high regard and take full responsibility for having allowed this to happen.

We want to sincerely apologize to everyone at Ubisoft, the Assassin&#8217;s Creed team, the original artist, and our fans.
Click to expand...
http://www.naughtydog.com/site/post/an_update_on_the_uncharted_4_a_thiefs_end_story_trailer/
A

Everything starts here when Azaïzia Aymar, Assassin's Creed Head Of Content tweeted this 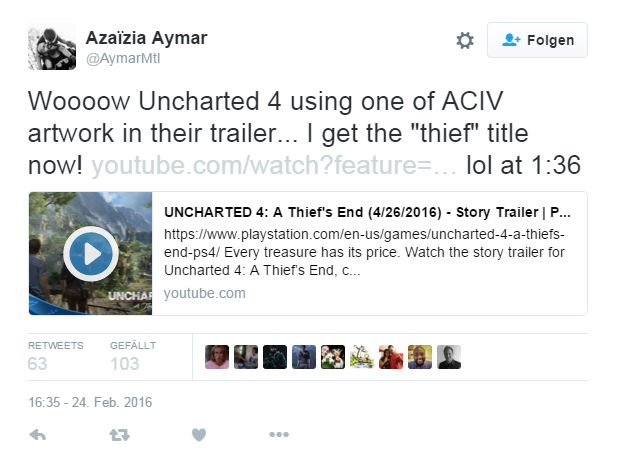 This is the scene he mentions, a (what my guess is) key scene in the game

The image you are seeing there tho is from the Assassin's Creed IV: Black Flag artbook

To those saying "Yo these are not the same!!", here you go

There are minor differences like the missing pirate, which means that this isn't a homage to Black Flag (like seriously, why should Naughty Dog make an easter egg for an old Ubi game? lol) 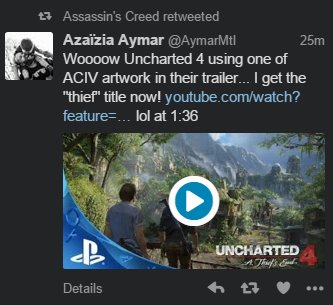 Remember Jonathan Cooper, ex-Ubi animator and currently Naughty Dog animator, who took shots at Team Yves for the 'female animations are too hard b' debacle? 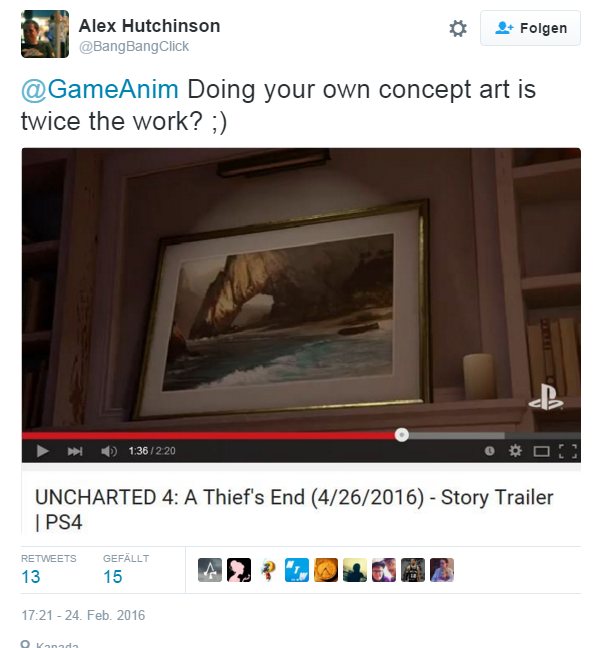 What is going on here? Did Naughty Dog.. I'm scared writing this.. S T E A L Ubisoft concept art because they are among the best in the whole industry? Do they want some of that Ubisoft shine? Or is this just an artist fucking up?
M

That looks like a nice nod to AC actually.
T

I don't see the big deal. They copy the entire game every year.


Seriously though, big oops from ND. They should apologize.
S

Good case of lazy (dev) artist right there
Some serious fuck up.
D

Reposting from the other thread.

Jonathan Cooper is an ex-ubisoft animator. He joined Naughty Dog and said some stuff about his previous employer when the female assassins thingy came to light.

Now with this news, an Ubisoft Montreal dev (creative director) tweeted this to him 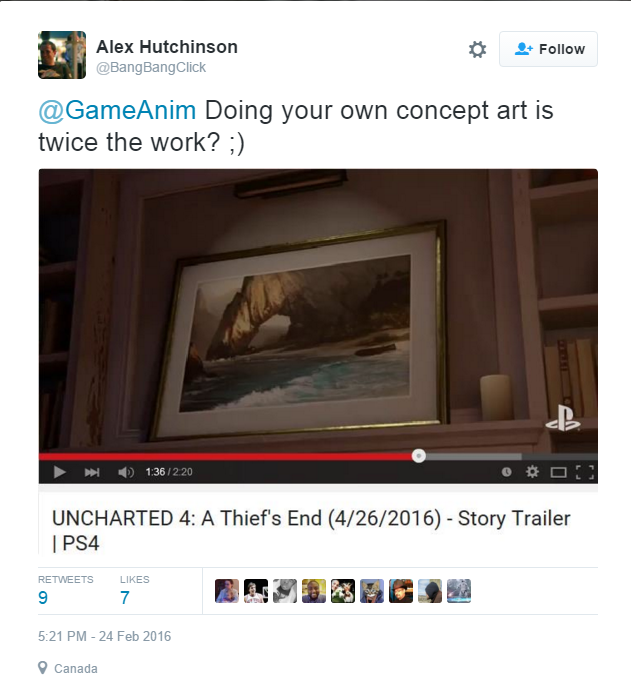 He waited two years... all for revenge.
P

Somebody's about to get canned.
N

I'm sorry, but this is the dumbest, most petty thing I have ever read/seen. Next thing we know Naughty Dog will be charged with using characters that resemble "humans."

And even if it were a copy, at least it'll be in a game I intend on purchasing.

EDIT: Somehow I missed that this was an exact match. I thought the picture on the mantle was being compared to the actual gameplay shot from Assassin's Creed, which does look different. Makes sense now. Wow.
N

Not like the Uncharted games have been very original before. Why start now?
B

Really bizarre they'd do this. Only thing I can think of is that it's a placeholder that was overlooked. Strange that they truck in on it though
D

How do you let that happen?

the fact that it is framed on a mantle is fucking hilarious.
P


A little lazy but eh.
D

Not a big deal at all. It's not like the actual in-game footage looked like AC. Just the artwork on the mantle.
E

That's pretty fucked up. The image is not even changed beside cropping out the pirate. What's even worse is that the trailer goes to that location from the painting immediately after.
S

Nathan's kill count certainly would make him an assassin.

The attempts people are going through to try and start drama is insane to me. Someone rightfully pointed it out, Ubisoft is getting their allowance of social media snark over it because it's a dumb thing to get past whatever artist put it in there, but at the end of the day everyone is going to solve it amicably and move on with their lives.
S

uncharted 4 seems heavily inspired by assassins creed black flags (in terms of settings and all) so i am guessing its just a nod to it.

maybe in the credits they can say, "inspired by assassins creed black flags"
H

The in-game location doesn't look THAT similar IMO. But yeah, they definitely used that concept as a painting in the living room scene. Perhaps the artist who did the piece back then for Ubisoft now works at Naughty Dog? That still wouldn't make it legal, of course, but still.
S

So what game looks amazing
Y

This is actually embarrassing. Not going to make me boycott the game or anything, but it just strikes me as incredibly lazy.

Someone's getting fired and the game will have to be patched.
N

Oh wow, that's a pretty bad. It'll be interesting to see what kind of response and what, if anything else will pop up.
K


A little lazy but eh.
Click to expand...
It's stealing.
P

After Naughty Dog borrowed Ellen Page's appearance then mysteriously changed it after Beyond was announced? Shocking.
L

the AC series does have really great concept art, they can take it to the next level now and label it so good its worth stealing

Didn't something similar happen with The Last of Us and someone's map or something? I guess that guy wasn't fired, in the end.
H

Nobody is standing next to the boat this is BS
T

Massa said:
That looks like a nice nod to AC actually.
Click to expand...
It does, and I would be surprised if ND have fucked up and used the image without permission - especially seeing as they had a similar issue with using a copyrighted map in The Last of Us.
F

Well thats a fuck up.


Someone at Naughty Dog probably just googled something and copy / pasted the image.


I just googled "pirate beach art" and that image is the 2nd picture that came up and linked to a page that had nothing to do with Assassins Creed.

benicillin said:
The attempts people are going through to try and start drama is insane to me. Someone rightfully pointed it out, Ubisoft is getting their allowance of social media snark over it because it's a dumb thing to get past whatever artist put it in there, but at the end of the day everyone is going to solve it amicably and move on with their lives.
Click to expand...
So we shouldn't talk about it? Lol
B

I would imagine they cleared it with Ubisoft before including it.


Seems like a tribute given the "pirate" theme of the game


Edit: image has been replaced. Someone definitely fucked up
Q

digitalrelic said:
Not a big deal at all. It's not like the actual in-game footage looked like AC. Just the artwork on the mantle.
Click to expand...
Yeah. All games should totally be able to steal artwork made by other artists.
V

digitalrelic said:
Not a big deal at all. It's not like the actual in-game footage looked like AC. Just the artwork on the mantle.
Click to expand...
I'd say it is a pretty big deal to take someone's work, remove a tiny piece of it that you don't like, and then put it in your AAA blockbuster product. Or are you saying art has exactly zero value and the artist should feel proud that his or her work was used?

That is, assuming, that the piece is still in the version that will ship on the disc.
V

WOW! That would be pretty embarrassing for the artist who did it!
R

Pretty obvious, down to the penis head negative space.
C