With Microsoft creating service pillars like Xbox Game Pass and Project xCloud to go along with industry-leading hardware, more than ever Microsoft needs a stable of high-quality titles to drive home the quality and value of its subscription options. To that end, the division has purchased tons of new studios, including RPG heavyweights Obsidian Entertainment and long-time partner Undead Labs, while also setting up all-new studios like The Initiative.

For now, here's a rundown of every studio and all the games (we think) we know about so far.
Click to expand...

Not a lot is known about Halo Infinite, save for a teaser trailer we got at a previous E3. The story is expected to re-focus on Master Chief, following the grave events of Halo 5, which sees the galaxy caught in the grip of gigantic ancient constructs known as the Guardians, controlled by the now-rogue A.I. Cortana.

Compulsion Games, known recently for We Happy Few, is a bit of an enigma. The Canadian studio is currently focusing on content updates to fulfill obligations for We Happy Few's season pass, including an infinite Sandbox mode for the survival game, and story packs including "They Came From Below," "Lightbearer," and, "We All Fall Down." Little is known about what these DLC drops will contain, but the first to break cover will be "They Came From Below," which is reportedly nearly finished. It's unclear what Compulsion might work on after completing We Happy Few.
Click to expand...

Led by Brian Fargo, the studio specializes in classic "CRPG"-style titles, where turn-based isometric play in Wasteland and classic dungeon-crawler style in The Bard's Tale.

Right now, the studio is working on Wasteland 3, which already looks as though it's going to be a big step up from Wasteland 2 in terms of visuals. The studio is also working on bringing The Bard's Tale IV to consoles, as well as an "unannounced" project, expanding its employee base by at least 30 percent.
Click to expand...

Beyond working on continued updates for Minecraft itself, Microsoft is also working on a separate title dubbed Minecraft Dungeons, based on classic dungeon crawlers like Diablo.

Despite near perpetual delays, Minecraft should also be getting a 4K texture pack for Xbox One X in the future. We've also heard that the team is working on another "big" separate Minecraft project. We'll have to wait and see.
Click to expand...

One of Microsoft's most-promising recent acquisitions, Ninja Theory is known for the award-winning Hellblade, with some industry-leading facial motion capture and truly haunting atmospherics. While the game was limited in general scope, Microsoft and Ninja Theory seem keen to grow further, having expanded to a new building and hiring several new staff.

The team is said to be working on "multiple" projects, and we've heard the studio's latest could be revealed at E3 2019.
Click to expand...

Obsidian is a renowned RPG company famed for the South Park: The Stick of Truth, and the Pillars of Eternity CRPGs. The studio is also crowned with making what is arguably the best Fallout game, in Fallout: New Vegas.

Right now, Obsidian is actually working with another publisher to complete The Outer Worlds, a vibrant sci-fi RPG under a contract from Take Two. It would appear that Microsoft owns The Outer Worlds IP as a result of acquiring Obsidian, but whether or not Take Two retains the publishing rights to any potential sequels remains a bit of a mystery. Obsidian is also working on bringing Pillars of Eternity II: Deadfire to consoles, alongside at least one unannounced project.
Click to expand...

One of Microsoft's largest and most acclaimed studios, Playground Games is known for the incredibly popular Forza Horizon arcade racing series. The team at Playground Games has swelled enough to split into two separate divisions, one retaining work on Forza, while another is heavily-rumored to be working on an RPG, which, quite possibly, could be part of Microsoft's dormant Fable franchise.
Click to expand...

Rare is Microsoft's most celebrated studio, known for classic Nintendo franchises like Killer Instinct, and more recently Sea of Thieves. Rare continues to work on Sea of Thieves as a live ops game, building it out with new features and systems to keep it feeling fresh, while attempting to attract newcomers. The game is long-rumored to get some sort of fishing system (c'mon Joe), while also adding other new activities.

For a time, Rare was all-in on Sea of Thieves. We've heard that the studio is also exploring building other games, one of which might be another multiplayer title.
Click to expand...

Microsoft's Gears of War all-stars, The Coalition is tasked with expanding the Gears universe beyond its corridor cover shooter roots, and Gears 5 looks as though it could be a big leap for the franchise. Set in what looks to be more open areas, Gears 5 follows Kait on a quest for answers about the mysteries of the Locust, who are hellbent on wiping out humanity. Gears 5 will be the "largest Gears game yet," according to The Coalition, and we should get a better look at E3 2019.
Click to expand...

The Initiative is a brand-new studio led by Darrell Gallagher of Square Enix and Activision fame, based in the Santa Monica area. The Initiative has been scooping up major industry talent including God of War and Red Dead Redemption 2 developers and innovators. All signs seem to point to The Initiative building some truly grand "AAA" games in an attempt to match PlayStation on quality, but very little is known about what the studio might be working on.
Click to expand...

Turn 10 leads the Forza effort for Microsoft, working primarily on the Forza Motorsport series of racing simulators as well as the franchise's engine. For now, it looks as though the studio might be taking a break from Forza Motorsport's bi-annualization, skipping a release for 2019. Instead, the studio is working on further updates for Forza Motorsport 7 for the time being, perhaps waiting for next-gen to showcase the power of the next Xbox consoles.
Click to expand...

Undead Labs is known for the State of Decay franchise and has a sizable fan following who have been helping shape the zombie apocalypse survival sim. State of Decay 2 suffered a bit of a mixed reception due to its rough edges at launch, but after months of polish, it's now in a really good place. State of Decay 3 is undoubtedly on the table, with more robust Microsoft support for its online capabilities. Undead Labs also has a huge array of vacancies, as the studio seeks to expand its capabilities.
Click to expand...

Beyond Microsoft's in-house studios, the company also works with some third-party developers to build exclusive titles for Xbox Live-capable platforms. The central criticism of Microsoft's current-gen Xbox has been the strength of its exclusive games, which have received mixed success. While the Forza Horizon series rocked many accolades and praise, other titles like State of Decay 2 launched in a relatively rough condition. Xbox Game Pass has helped add value to some of the lower-end titles, since all Microsoft games are set to appear in the subscription service, although there's a big appetite for true "AAA"-quality experiences that match Sony's efforts in the space.

Microsoft is well-placed for a game-rich future, especially as it attempts to court subscribers to its services such as Xbox Game Pass, and Project xCloud in the future. It remains to be seen if the company can truly match Sony and Nintendo on quality in the minds of the wider audience, but it shouldn't take long to find out.
Click to expand...

Some of the studios will be having some good surprises at E3, but it's great to have a status update on what everyones working on. The investments in these studios will hopefully pay off big time with tons of quality games.

The re-branding from Microsoft Game Studios to Xbox Game Studios also continues to show their focus on gaming. With he S and the X Xbox One consoles they have already proven to us they got the hardware, and the feature software, now, if they can prove to use they have the gaming software, it's a wrap.

It's looking good, while yes, it's still early, things are clearly showing signs of good things to come, at least imo. For now we enjoy Crackdown 3, while we wait on Battle Toads, Gears, and other unannounced 2019 games that will likely be announced at E3 until then.

Cool. Nice to know I was pretty much up to date on everything. Thanks for putting this all in a central location Voost.
V

That already got a remaster.

Voost Kain said:
That already got a remaster.
Click to expand...

There is no AOE games on xbox

Gotta say, none of these sound interesting as a Xbox fan. Especially if Playground Games is working on Fable and not a new IP.

As an Xbox fan myself, they need something to counter the big Sony hitters. Xbox has nothing at all to match Uncharted, The Last Of Us, God of War... You know, the big hitters.

There just isn’t a visually amazing and story driven game for them.

Granted anything they do now will be for next gen systems. But there’s not even a hint at anything new like this.

And while I can moan about more sequels and nothing original, at the same time some things are missing... like why isn’t Rate making a new Banjo/Conker game?

I dunno, I think the new Xbox will beat the PS5 in terms of raw performance. But games wise, exclusives wise, I know PlayStation will have them beat hands down.
S

So nothing new?
V

Sad if Rare is working on another multiplayer game... Sea of Thieves to me was extremely boring in my opinion. I'm curious to see Ninja Theory new projects.

Oso Torpedoes said:
Sad if Rare is working on another multiplayer game... Sea of Thieves to me was extremely boring in my opinion. I'm curious to see Ninja Theory new projects.
Click to expand...

I would love a new Viva Piñata game... 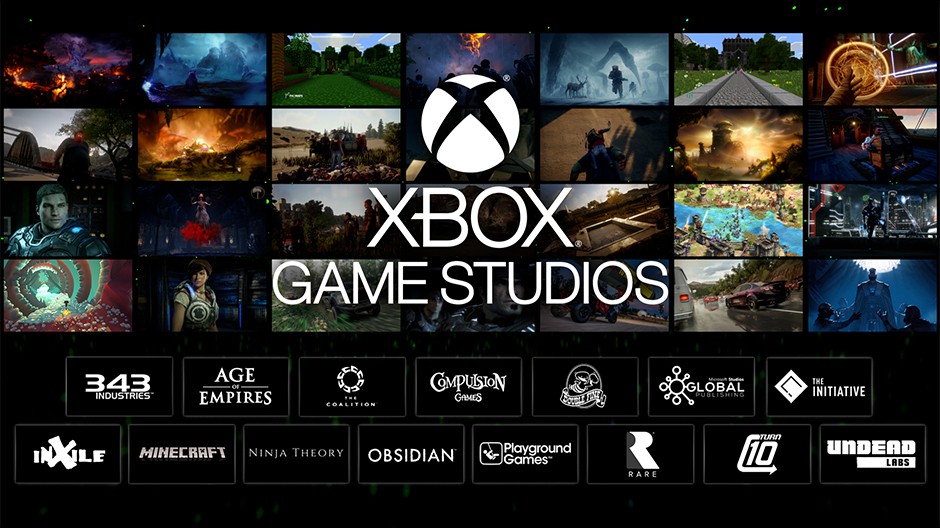 Microsoft's Aaron Greenberg did a tour of the newly acquired development studios and was pleasantly surprised by the innovation and content.

o'dium said:
As an Xbox fan myself, they need something to counter the big Sony hitters. Xbox has nothing at all to match Uncharted, The Last Of Us, God of War... You know, the big hitters.

There just isn’t a visually amazing and story driven game for them.

Granted anything they do now will be for next gen systems. But there’s not even a hint at anything new like this.

And while I can moan about more sequels and nothing original, at the same time some things are missing... like why isn’t Rate making a new Banjo/Conker game?

I dunno, I think the new Xbox will beat the PS5 in terms of raw performance. But games wise, exclusives wise, I know PlayStation will have them beat hands down.
Click to expand...

I would agree with this. I think Ninja Theory, The Coalition, 343 Industries, and The Initiative will do just that.
You must log in or register to reply here.

metaverse replied
Sep 21, 2022
To the people who are concerned about xbox this gen, this is what they will have this gen so far. Plus activision, if the deal is done.
Opinion 2 3 4 5 6

Boss Man replied
May 16, 2022
Matt Booty on State of Decay 3: "They're working with The Coalition up in Vancouver using technology around Unreal Engine5 and stuff in Gears of War"
2