Exclusive- official cover of Gears 5 and the possible release date.

One of the great exclusive of Microsoft and probably for many one of the most important titles of 2019, is Gears 5 , the next installment of the most valuable franchise - along with Halo - that has Xbox. Being very expected, it is true that since The Coalition have not shared much information since last year, becoming every bit of it in very valuable material for fans.

And today, as usual in Generation Xbox, we like to investigate where we can, we have found an exclusive that you will like, the official cover of Gears 5, which has appeared listed in the Taiwanese system of age classification. As at this point we are proficient in the language, we have also found more juicy information than if it is possible that it is subject to changes, because it is usual that this list can be renewed at some time. 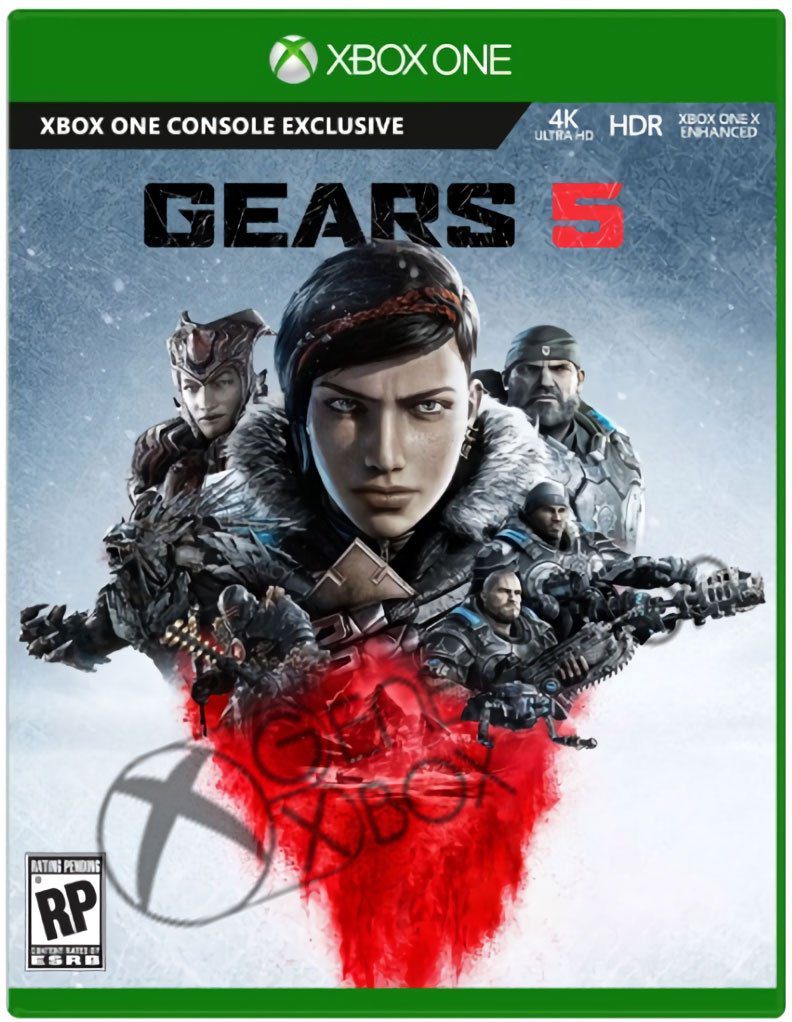 Gears 5 is going to September

The other data we have found is the possible launch date , September 10. As it happened with the remake of the first Gears of War, it is possible that Gears 5 is unmarked of its possible competitors ahead of its departure to September to avoid having to compete in the marabunta of AAA titles of October and November, a very clever move of Microsoft .

But going back to the cover, can you draw any conclusions about the characters that appear? No doubt Kait is the protagonist , but it seems that there is some other character that will be present. 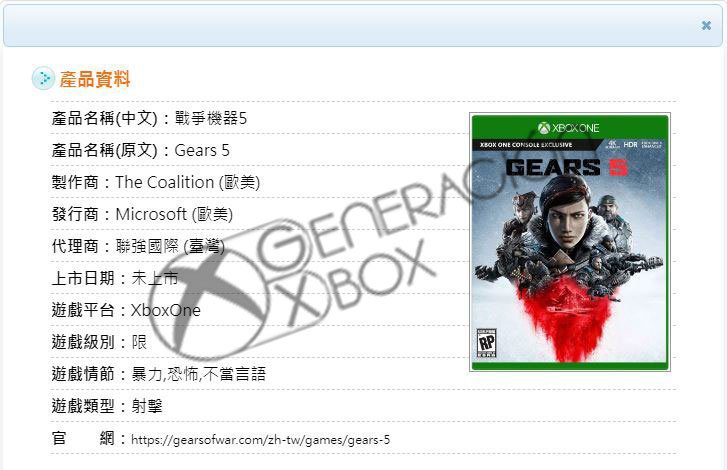 The cover looks photoshopped as fuck!
Reactions: GnomeChimpsky, Lionel Richie, Duallusion and 13 others

I didn't want to make another thread so just adding more info.

Gears 5: New Ephyra would be the center of the conflict between Locust and Gears

The bet of The Coalition and Xbox Game Studios with Gears 5 seems to be titanic. While it is true that in terms of magnitude, Halo: Infinite stole enough prominence, the fifth numbered delivery of the franchise that started Marcus Fenix and his teammates arrives this year and would be one of the first games of "the new and renewed" division of Microsoft games.

A much more ambitious project that promises to leave us speechless. We already know enough about the game, but there is never any additional information. This time thanks to official forums almost confirmed the theory that New Ephyra will be present in the wars of the new installment of Gears of War.


In Gears of War 4 we could see New Ephyra, the capital of the COG. At the beginning of the fourth installment, Jinn made his speech with the hundreds of citizens who now populate this new city. Well, according to the images of the Gears 5 trailer, the pavements and many textures match those we saw at the beginning of the game. Likewise, a shattered Raven argues that this war scenario that we saw last E3 2018, is being battered by conflict. To this the theories around this scenario, assure that obviously there is no great vegetation, so it would be a sign that someone would be in charge of it, once again a house with which we are facing an inhabited city. 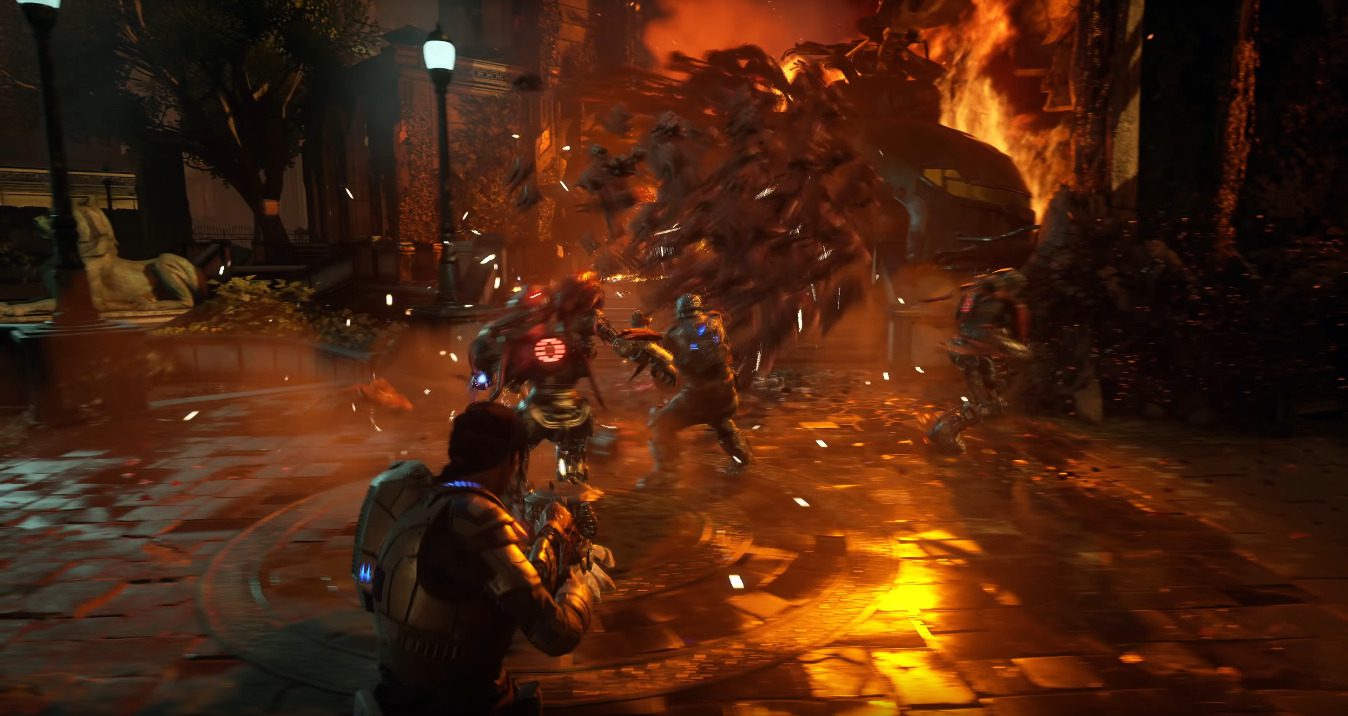 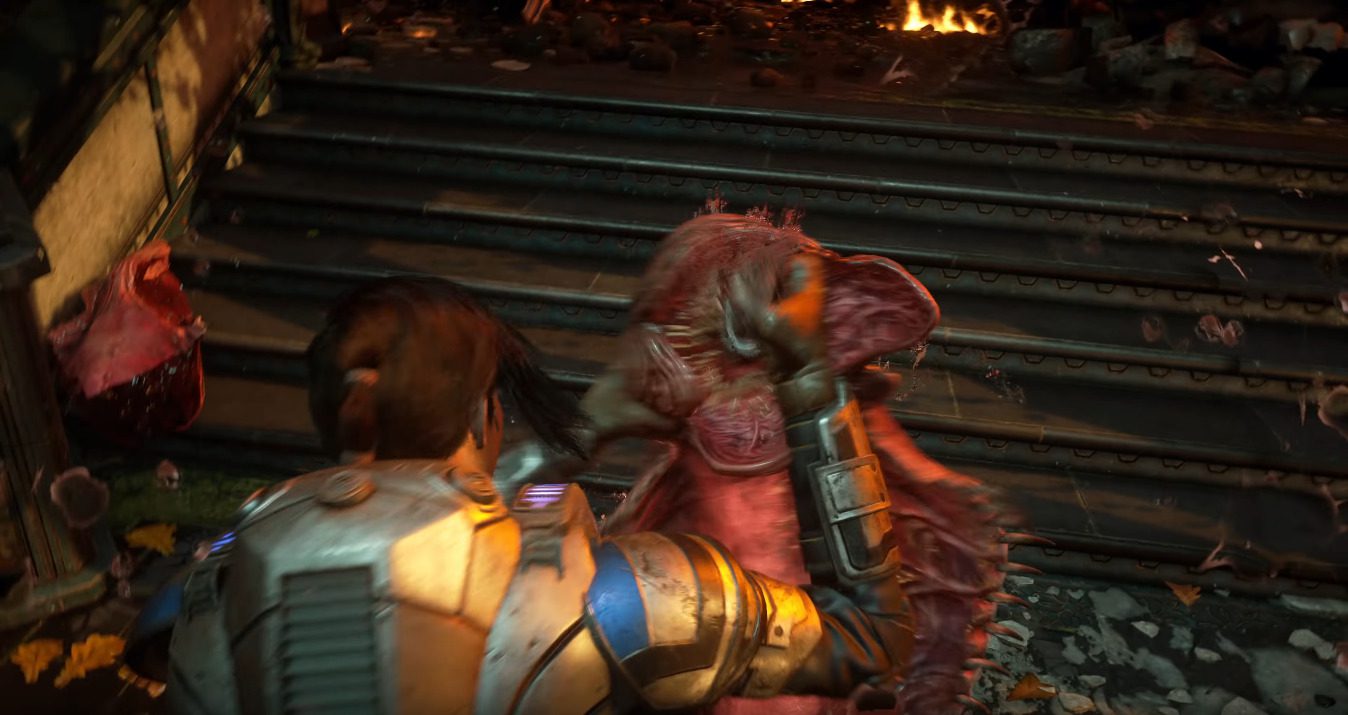 In addition, no architectural element coincides with ancient ruined cities, something that we saw too much in the fourth installment. So everything indicates that there will be a climax where El Enjambre will once again take the battle to the heart of humanity.
Click to expand... 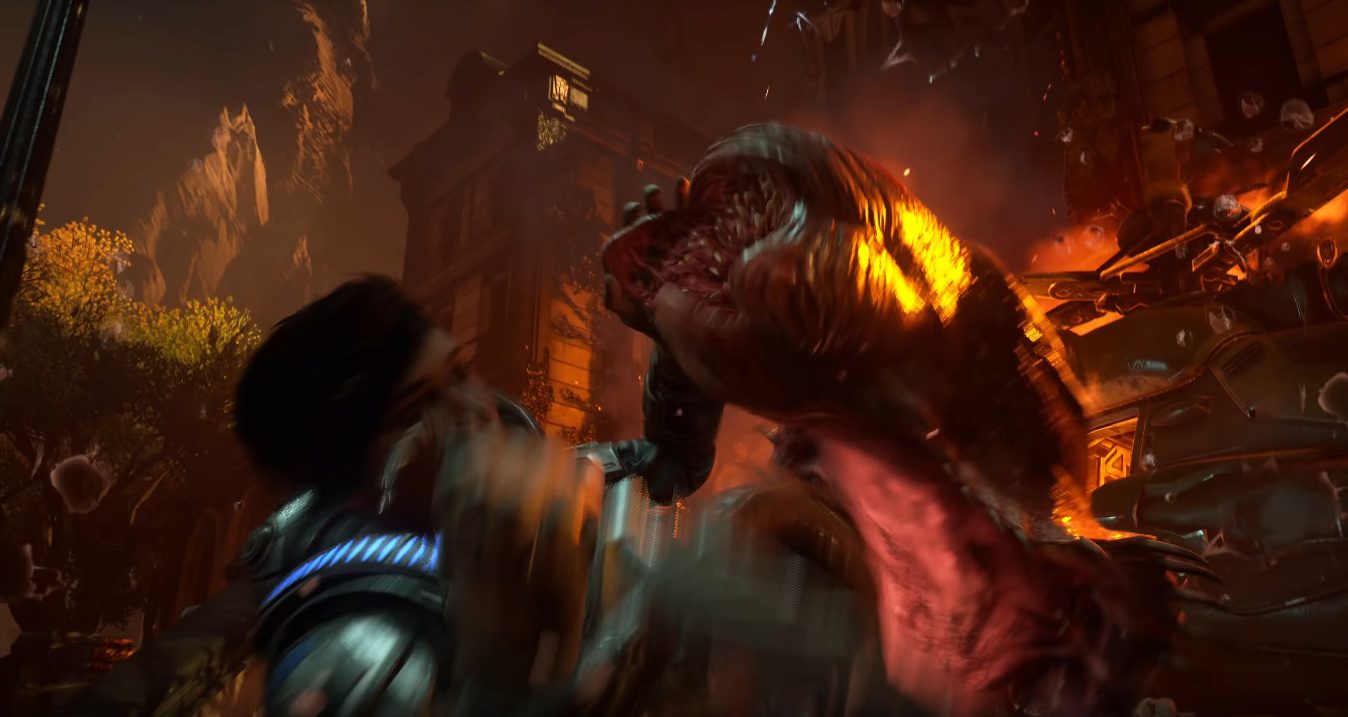 It's so bad I don't believe it's true.
Reactions: The_Mike, FeldMonster, Fake and 4 others

The fuck is this shit. ugh. Too many women. Barf.
Reactions: Lunatic_Gamer and N00bWarrior

big yikes this looks like one of my old school projects. the characters dont even look unreal its like they took a bad bust production and drew that.
B

What's with that red blob?

No way this is official.

JaffeLion said:
The fuck is this shit. ugh. Too many women. Barf.
Click to expand...

What is there one woman on the cover lol? I'm pretty tired of the badass chick with half a shaved head look though.
Reactions: The_Mike, Lunatic_Gamer, merlinevo and 3 others

I don't believe in this cover. Looks really bad.
Reactions: The_Mike and VectorVictor

It literally looks like that James Charles dude. For real, look him up.
Reactions: The_Mike and Isa
N

Gears 5... Since when did they go with that naming?
Reactions: The_Mike and DanielsM
D

Dirk Benedict said:
Gears 5... Since when did they go with that naming?
Click to expand...

They announced that a ways back, I have no idea why they did that. Gears of War sounds and looks better, imo. "Gears" a game about car mechanics.
Last edited: May 13, 2019
Reactions: Dirk Benedict

Breakage said:
What's with that red blob?
Click to expand...

5 things you need to know about free bleeding

There are many reasons to abstain from using sanitary products.

The hype for this game is close to zero, the sales will not be good, Just like 4.
Last edited: May 13, 2019
Reactions: Lunatic_Gamer

Excited to see how they plan to evolve the gameplay, story looks darker.

I hope September is true. Would be awesome

If that cover is real...well, just fuck it all.

Yeah that ain't it Chief. (at least I hope that isn't the real cover cause good god)

naw that definitely isn't it

If they don’t have my Carmine in campaign and multiplayer I’m not buying it just like how I did with 4 :/
Reactions: Space Runaway

I don't know, there's something about this Gears I like....Hope it augurs well.....

Dirk Benedict said:
Gears 5... Since when did they go with that naming?
Click to expand...

Gears of war 4 was revealed as Gears 4.

This is probably heresy on another forum but im going to say it anyways: I dont see how a "female" lead with James Charles facial features is going to go over in the xbox/gears fanbase. I assume some will be there day one because loyal fanbases and all that but this doesnt seem to me to be the franchise to switch from all lead males to females because "muh diversity." Xbox is in no position to be messing with the few golden gooses they have left. This seems like a big risky bet with little to no upside. Having a female lead wont bring in female gamers to this franchise or console.
Last edited: May 13, 2019
Reactions: Lunatic_Gamer

Kingwingin. said:
I hope September is true. Would be awesome
Click to expand...

The September release date is real. It's been what I've been hearing around a few places.
Reactions: kingwingin

Not sure what it is but something about that cover looks off... Like the scaling of the woman doesn't fit in with the rest and the title logo appears to be too small? But maybe that's just me.

I'm a big Gears of War fan, as you can probably tell by my avatar. This cover looks absolutely atrocious. I can see it being a September release but for the love of God please do not let that be the real cover.
Reactions: The_Mike, JimiNutz and DanielsM

Dabaus said:
This is probably heresy on another forum but im going to say it anyways: I dont see how a "female" lead with James Charles facial features is going to go over in the xbox/gears fanbase. I assume some will be there day one because loyal fanbases and all that but this doesnt seem to me to be the franchise switch from all lead males to females because "muh diversity." Xbox is in no position to be messing with the few golden gooses they have left. This seems like a big risky bet with little to no upside. Having a female lead wont being in female gamers to this franchise or console.
Click to expand...

This will not sell well lol.
Reactions: Lunatic_Gamer

That godzilla looking monster on the left looks pretty cool, everything else looks bleh

Your post is barely comprehensible but im going to give it a shot...Im not up to date on my Gears lore and whose who so i have no idea who the lead should be. People liked Marcus Pheonix so if it aint broke dont fix it would be my motto. If the coalition or xbox think they are going to drastically expand the potential customer base because of adding a waymen, well, IDK about that,
Reactions: Lunatic_Gamer

According to Generation Xbox, which is a Spanish outlet that focuses on Xbox coverage, the Taiwanese rating board has a listing that features both the cover art for Gears 5, and the release date. The former looks pretty real, which is to say, if it's a fake, it's a pretty good fake. Meanwhile, the rating claims the game will release on September 10, which is a Tuesday, the most common release date for big games alongside Friday. In other words, the date checks out as well.


Of course, take this with a major grain of salt. Everything seems to check out, but that's the case with many fake "leaks." Thankfully, we should find out if it's accurate soon enough, because I suspect a release date and cover art will be revealed at E3 alongside an extended gameplay trailer.

Gears 5 is in development for Xbox One and PC and is slated to release sometime this year. For more news and media on the game, click here. For more information on the highly-anticipated shooter, here's a brief and official pitch:

"The world is crumbling. Humanity’s reliance on technology has become their downfall and enemies are uniting to wipe out all survivors. As Kait you must journey across the biggest, most beautiful Gears world to uncover the origins of the Locust, and fight with your squad to protect what’s left."

Exclusive- official cover of Gears 5 and the possible release date.

One of the great exclusive of Microsoft and probably for many one of the most important titles of 2019, is Gears 5 , the next installment of the most valuable franchise - along with Halo - that has Xbox. Being very expected, it is true that since The Coalition have not shared much information...

Too woke. No buy.
Reactions: Lunatic_Gamer and Godzilla Emu

makaveli60 said:
No way this is official.
Click to expand...

It isn't. Marcus appearing with a beard makes it 100% fake, let alone the damn photoshop mess in there.
Last edited: May 13, 2019
Reactions: makaveli60

Solarstrike said:
Too woke. No buy.
Click to expand...

Wake it up then

Why does this cover look like Perfect Dark Zero to me?
Last edited: May 13, 2019

The cover art could be a placeholder guy’s.
Reactions: S1L3NT SH0T 419

Horrible! This can't be real...
Reactions: CyberPanda
You must log in or register to reply here.

Jan 2, 2021 started Lethal01
Jan 4, 2021
FireFly
2 3 4
Gears 5’s abysmal Steam debut could tell us something about the potential audience for Xbox exclusives on Steam