I have a veery ulterior motive for asking. Polycount is holding a contest were you take an environment from a fighting game and recreate it in 3D (I can hear the 2D purists with their pitchforks already).

So now Im basically hunting down reference, I have a few favorites, but I figured this could be a good place to show off some of your own faves. I will probably tackle something with no characters in it, but feel free to post whatever you like.

Im also not a big fan of the obvious ... so while my favorite stage of all time is the Chun-Li stage of SF III, I see that as a popular choice and would rather do something thats a little less popular. Also, if anybody has links to galleries, I would totally appreciate if you would share the, they're hard to find!

Some of the ones I think have promise:

Wish I could do this one, haha:

The stage in SFA that's just a grass plain
R

I don't have a pic but Shanghai from CVS2! OOOWEE!
R

Totally forgot about Last Blade! I'll launch the game up and take a look, Garou also Man, you picked like the worst representation of that stage. Haha.


Oh yeah, one of my favorite stages ever is the Thailand stage with the giant statue. Pretty nostalgic for me.
R

I have a soft spot for Balrog's from Street Fighter 2. The hot chicks, the dudes in the background, the cars, the seedy atmosphere, the enigmatic NIN NIN... it was amazing in 1991.
D

Almost all of Alpha 2 actually.
C

Hard to find decent pics, especially at native res, but some backgrounds from JoJo's Bizarre Adventure (Capcom) are amazing. 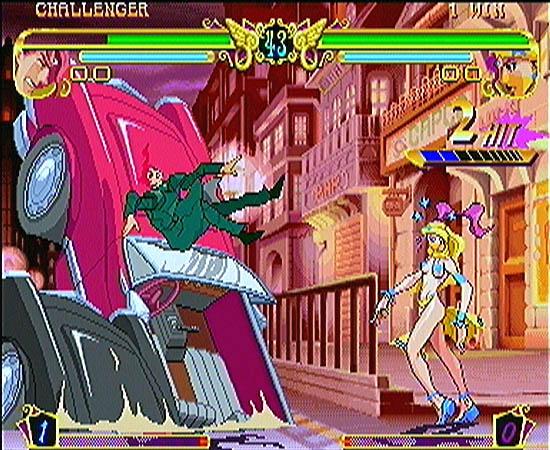 Also im offended by that 2D to 3D contest.
L 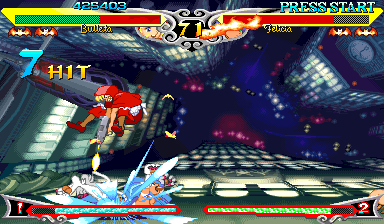 If you looked at anything from Garou, KoF, SFZero, SF3, Vampire Savior, Samurai Spirits, or Bakumatsu Romance you will find so much gorgeous and mindblowing art that could never be replicated today.
S

Shout outs to Alpha 2 as well though, that game had a lot of fantastic stages.
C

man Thanks to Mugen stages I seen a great amount of stages from game I thought were great.

These were the two I thought of as well.
E

Ignore the bottom bit. A lot of really good ones in this thread already.
C 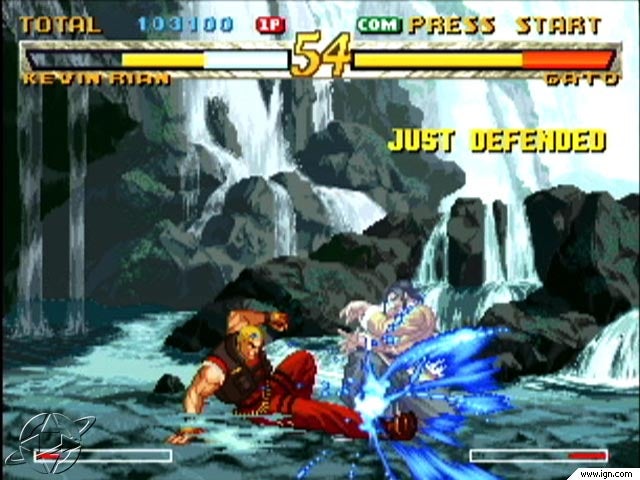 In terms of today, I think MK9 has the best backgrounds out of all the recent crop of fighters.
K

Most of the backgrounds from KoF 2000, particularly the aquarium and the warehouse.
A

All of Pocket Fighter's stages.

edit: but especially this one for some reason Although may not be 2d fighter, Comix Zone has some neat background
W

I also love almost anything from Marvel vs Capcom 2 as well.
A

Really liked this one in blazblue: 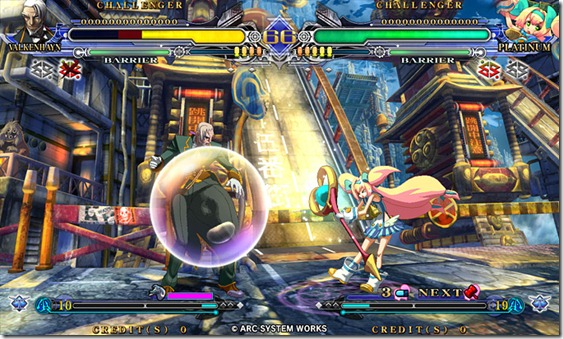 The barking dog just made it for me

The other one that needs mentioning is King of Fighters 13 USA stage. can't find a pic but it's in this video:

I wish there was a way to have my desktop background be one of these with a fight occuring. No, not MUGEN.

And both are from SFA2. Charlie and Ryu's stage.
A

Whoa, nice to see Darkstalkers 3/Vampire Saviour locales get mentioned. Fetus of God would be all kinds of fucked up but awesome. I'd also put down a vote for Yun/Yang's, Elena's & Ken's stages in Third Strike.
S

edit: but especially this one for some reason

I love this stage.

I tried to find a screenshot of it, failed and instead got artwork of the stages Fighting on a tv set. OOOOOOOOOOO YEA!
Click to expand...

..and this. I especially love the MSHvSF variation of the latter, because of the little background gag that would occur depending on whether or not Spider-Man was being used on that stage.

Avalon from Children of the Atom is pretty damn impressive too. (Good thing it was an awesome stage, because you'd be seeing it a lot once you get up to Magneto...)
S

Capcom vs SNK 2 is my favorite game, and these stages are my favorites from it.

And also, I'm not sure if this is stretching your criteria or not Raging Spaniard, but some of the stuff they've done in Card Saga Wars is simply awesome.

Take the Chrono level in this video for example. http://www.youtube.com/watch?v=5rnBRTEEfBw.

I'm not sure if you've followed it at all but they show a whole bunch of stages off in the "card support system" video, they have levels like Valkyrie Profile's first dungeon in the snow and things like that.

You could make a solid case for Alpha 2 having the best backgrounds of all time.

one of the greatest stages evar. so simple yet so dramatic.

Lot of my favorites have been mentioned, but here are two more. 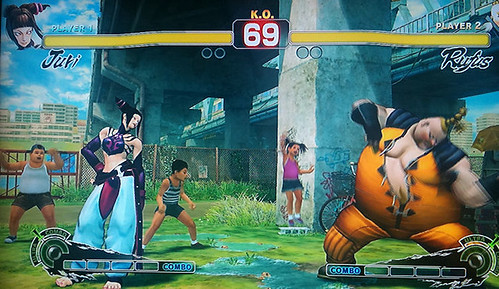 I gotta co-sign on the Street Fighter Alpha 2 and the Darkstalkers 3 stages, those are all amazing visuals. Capcom definitely hit a mark during the mid/late nineties. The stages from Street Fighter III: New Generation are all works of art. My favourites: 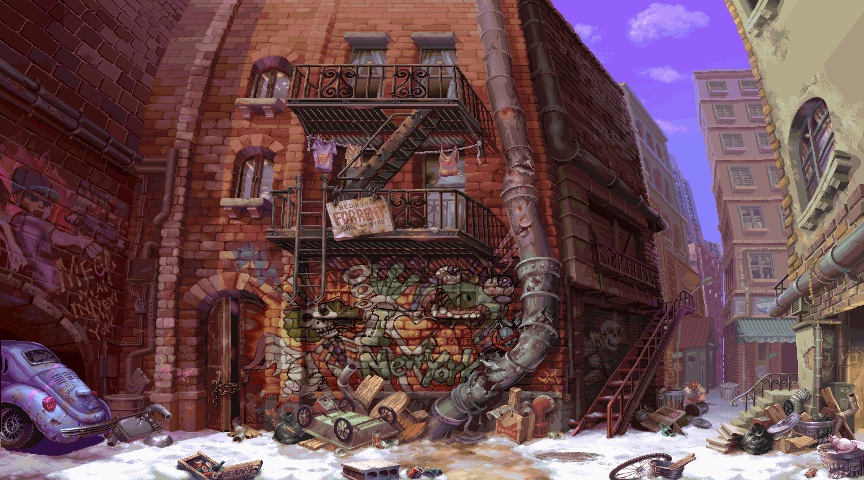 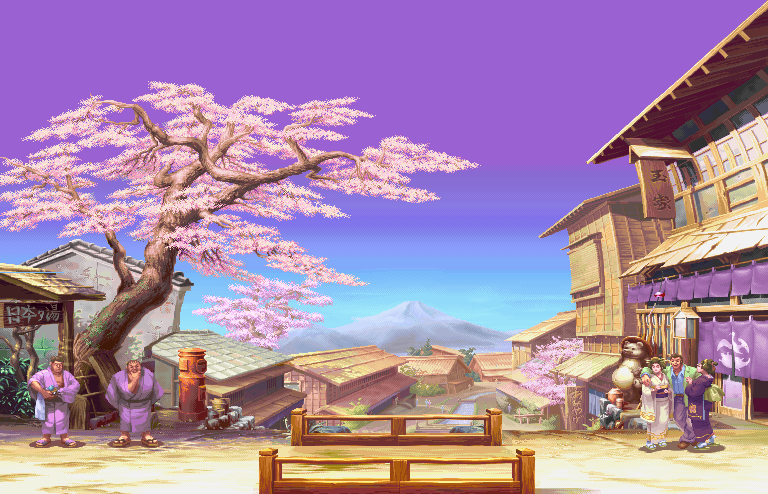 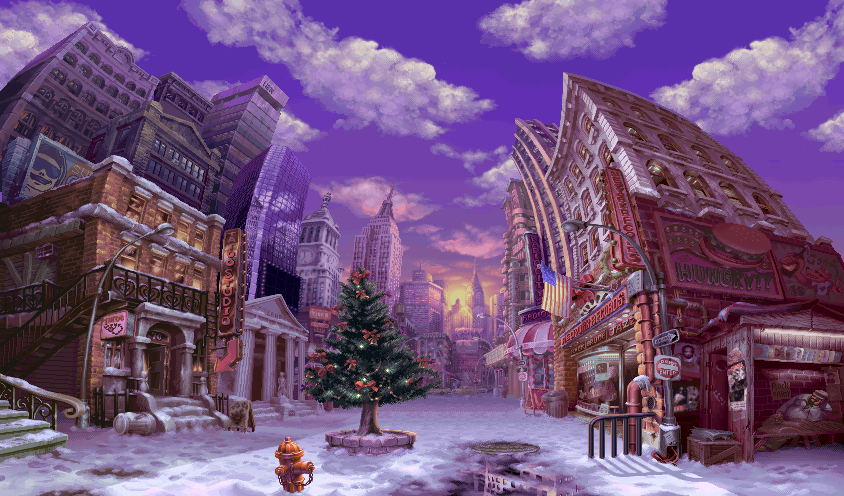 Another random stage I've always enjoyed is The Courtyard from the first Mortal Kombat. I've always loved the pure aesthetic that the game has. 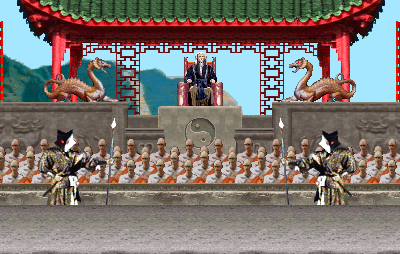 If you looked at anything from Garou, KoF, SFZero, SF3, Vampire Savior, Samurai Spirits, or Bakumatsu Romance you will find so much gorgeous and mindblowing art that could never be replicated today.
Click to expand...

I was playing Vampire Savior training mode on this stage a couple weeks ago and realized that I was fighting on the side of a building. Mind blowing moment for me.
C

Solune said:
Capcom vs SNK 2 is my favorite game, and these stages are my favorites from it.

This stage and every interpretation of the original is fantastic, truly a classic stage.

Come to think of it, every Ryu stage ever has been awesome.
T

VS is probably the winner for the amount of good stages it has, but for something recent: 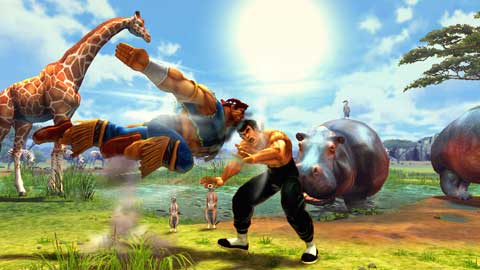 love this stage sooooooooo much.
E

SquirrelNuckle said:
Lot of my favorites have been mentioned, but here are two more.

I am no fan of MK, but this stage was pretty great. It always made me think "why are we fighting? let's mario our way there!".
N

Unfortunately there aren't any larger background pics but The Fallen Angels had some great looking ones:

Emperor Bohe said:
Another random stage I've always enjoyed is The Courtyard from the first Mortal Kombat. I've always loved the pure aesthetic that the game has.

I loved MK1's atmosphere. It really felt like a playable low-budget martial arts flick. I don't like the silly direction the series took after that.
R

I just found out this stage is Australia. I have no idea how I never knew that.
You must log in or register to reply here.

Jul 7, 2020 started sublimit
Jul 9, 2020
TyphoonStruggle
PlayStation All Stars 2: What it needs to succeed