Details are emerging from GameInformer's October issue, which has New Super Mario Bros U as a cover story.

So far we have gotten confirmation of two more mini-games from NintendoLand and further details on New Super Mario Bros U.

- dozens of levels across one world map, like Super Mario World
- map can be panned around and explored at any time
- game features an auto-scrolling, Boost Rush mode for more of a challenge
- multiple branching paths that let you pick which way to go
- this is much more than the tradition level choosing, which usually gives you only two paths to choose from
- mid-world fortresses guarded by Boom-Boom
- end-level castles guarded by Koopalings
Click to expand...
Game Informer spotted 7 worlds: Acorn Plains, Sparkling Waters (tropical), Frosted Glacier, Layer Cake Desert (complete with melting desserts), areas similar to Forest of Illusion and Sky World and a world surround by a tornado
Click to expand...
- Three Yoshi variations
- Pink Yoshi: inflated with a GamePad/Wiimote shake
- This can take Mario even higher than the flying suit can
- Pink Yoshis don&#8217;t help in horizontal movement
- Large surface area useful for collecting a bunch of airborne coins
- Gold Yoshi: shake the controller to light up the immediate area
- Also stuns nearby enemies
- Gold Yoshis show up in the Fire Snake Caverns
- Blue Yoshi: can shoot bubbles
- Can ride the adult version of Yoshi in numerous levels
- Yoshi can still eat breaks
- Collect five to fill a meter
- This rewards Yoshi&#8217;s rider with a power-up
- Camera pans out a bit in co-op
- This helps you see hidden star coins and pipes that you normally wouldn&#8217;t come across in single-player
- Boost Mode: Place up to four floating platforms at a time
- Use the GamePad touch screen in Boost Mode to pop friends out of bubbles, stun enemies, make it easier to reach the flagpole, manipulate environmental objects, swat Paratroopas
- Turn on Boost Mode by powering up the GamePad &#8211; that&#8217;s it
- Players will go through pre-selected packs of levels in Boost Rush Mode
- Collecting coins makes the auto-scroll faster
- Limited amount of lives given at the start of each pack
- Dying doesn&#8217;t reset the clock
Click to expand...
NintendoLand

1. There will be single player only games. Donkey Kong and Balloon Fight amongst them. These games will be the ones supporting the off-tv play. Will have challenging features.

2. Music is really good so far. Even the non-remixed music you hear in the theme park and menus.

3. Looks like there are random "games" or activities? That you can play outside of the big theme parks.
Click to expand...
Metroid Blast:

Metroid Blast up to 5 players. Wii Game Pad is Samus ship (might feature other types of machines), and 4 players can play in free-for-all or team deathmatch. Pointer and analog controls supported. Several maps! Classic Metroid music. You will smile.
Click to expand...
Metroid Blast.. also seems to have a horde type mode?

Go through waves of enemies as a group.
Click to expand...
- ride a small train to and from attractions
- spend coins in the hub that you've earned by playing attractions
- winning pachinko games populates the park with Nintendo memorabilia
- this includes Miis in Zelda costumes
- Metroid Blast has everyone dress up in Samus' armor
- one player flies Samus' ship using the GamePad and screen
- 4 Wii MotionPlus players (plus Nunchuk) try to shoot down the ship
- no radar available
- includes a lava-filled Norfair map
- this map features a mechanical Kraid that players can grapple up
- Metroid Blaster requires Wii MotionPlus
Click to expand...
Balloon Trip Breeze:

Similar to Balloon Fight
Players guide floating Miss through side-scrolling levels filled with obstacles like electric spikes, crazy birds, and hungry fish.
Use stylus to draw gusts of wind to direct the Mii
Goal is to fly as far as you can.
TV shows complete view of the field, GamePad shows zoomed in for precise dodging.
Nintendo hopes the game breeds competition through Miiverse
Click to expand...
http://www.gameinformer.com/b/features/archive/2012/09/10/watch-the-exclusive-trailer-for-nintendo-land-39-s-balloon-trip-attraction.aspx
Will update as more information comes out.
D

Super Mario World
Click to expand...
This pleases me. A lot.

SMW world map style... fuck yeah
Click to expand...
Its funny how much it changes the game but it makes it so much more open and accessible, you can take on different places then revert back to somewhere else.
My first and best Mario experience was 6 Gold Coins - amaze.

Boost Rush mode
Click to expand...
This in 3D Land would have been epic, happy to hear Nintendo are looking to add difficulty and options
K

- game features an auto-scrolling, Boost Rush mode for more of a challenge
Click to expand...
I just want this to be brutally fast, or to let me set the speed.
M

The more I hear about Nintendoland, the more I'm interested about it.
And glad to hear that NSMB U will looks like SMW
O

Something tells me I should go pick up Super Mario World on the Virtual Console..
D

Glad the Koopalings are in, yeah they have been since NSMBW, but at mow this is in HD and is more like SMW. plus Boom Boom!

Nice to see Battle Mii is back!
S

Auto-scrolling mode is the best news. Those were always my favorite levels.
K

Nintendo Land needs more Pokemon, also with an area for each generation.
S

if NSMBU borrows things from SMW it may be day 1 for me.
C

I hope the franchises that are featured in Nintendoland are indicative of what Nintendo plans to release in the future. New Fzero, Donkey Kong, Metroid, etc. A new Balloon Fight might be a good downloadable title.
M

Baiano19 said:
NEW Super Mario World... fuck yeah!
Click to expand...
So aside from the aesthetics and the name, it should be the 2D Mario title most people have been craving?
G

Karsticles said:
I just want this to be brutally fast, or to let me set the speed.
Click to expand...
Spend coins Kid Icarus style! HYPE!

New Super Mario Bros U sounds like the true successor to NSMBW. Traditionally, Mario hasn't been good on a portable.
R

Colonel Mustard said:
I hope the franchises that are featured in Nintendoland are indicative of what Nintendo plans to release in the future. New Fzero, Donkey Kong, Metroid, etc. A new Balloon Fight might be a good downloadable title.
Click to expand...
Finally, the gritty Takamaru reboot we've all been waiting for.
S

I need to know as much as possible about the single player aspect of Nintendo Land. Here's hoping they have information on that.
K

believe
Click to expand...
Oh damn, that would be cool. I need to stop dreaming, though. 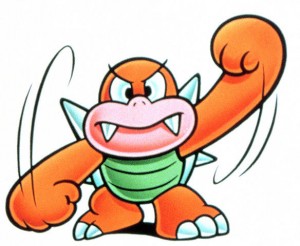 Can you use Yoshi in any level outside of castles/fortresses?
N

I have a good feeling about NSMBU, I place NSMBWii up there with SMB3 and SMW and if all aspects come together correctly for NSMBU dare I say it has the potential to be my favourite 2D Mario yet, now lets just have that music not sound so low quality this time.
S

I don't understand why I'm so excited by all this, but it all sounds awesome.

Bring on some Pikmin 3 news! No?
M

I really want to hear more about NSMBU's new features.

I mean, the list sounds like New Super Mario World. That isn't an unimpressive prospect, but once again they seem to be prioritising imitation over innovation. Yeah its going to be fun to play through proven mechanics again like a sprawling world map, etc.

But remembering back in the day, the jump from Super Mario Bros. to Super Mario Bros. 3 was phenomenal. Maps, powerups, multi-directional levels, new creatures, loads of new mechanics, music, art, everything was colossal.

The jump from Super Mario World to Super Mario World 2 was guided by a smorgasbord of new ideas, mechanics, the best 2D hand-drawn visuals the industry had at the time, and loads of new enemies, characters, themes, and features, and the result was a masterpiece that sprang from the mechanics of its predecessor and resulted in a completely new experience.

The jump from those games to this is jarring. Nintendo have become very comfortable with imitating their classics, rather than trying to take 2D gaming to the next plateau. They've also become too comfortable with a poor art style and unsavory music.

I'll play this, but I'll be enjoying the familiar, rather than awed by new. Nostalgic fun, rather than the push for new ideas that the company was famous for.
D

crimzonflame said:
Can you use Yoshi in any level outside of castles/fortresses?
Click to expand...
Dammit, I hope so. Normal Yoshi, at least... Baby's will likely be level-restricted.

One of the wort things about NSMBW was the fact that Yoshis were only in, like, 6 levels apparently.
T

Possibly the best news ever. Hype for this game just rose a few levels.
S

Too bad that its not dinosaur island, the squirrel suit is a shitty version of the cape and that the music is still a fucking peice of shit.
Also i prefer reznors than fucking boom booms, why did they have to use it in the mediocre game instead of this one.

I at least hope theres a remix of the SMW castle theme, please
N

Great, I was just starting to get tired of the NSMB games and the have to go on and include a
Layer Cake Desert
world.
D

Also, OP is missing this vital piece of info:

What is boost mode again?
N

PhoReal said:
Bring back that Boom Boom music.
Click to expand...
Well it is the boss music in every NSMB game so far, so really it never left.
G

Will we get a space world...with proper suits?

EDIT: Seriously though, bring back the pigs!
S

Is it weird that i'm excited for Digital Foundry comparison pieces of PS36iiU titles?

PS36iiU is now a thing
L

Bring back that Boom Boom music.
Click to expand...
They already have done that.

This may be a ridiculous idea but maybe they could write some NEW music for one of these games, sometime? The sound work in these titles is just shameful.
P

Finally, some damn variety! Cake World...
Click to expand...
Added, though some of those just sound like the usual Desert, Plains and Ice Worlds with food names.
N

Penguin said:
Added, though some of those just sound like the usual Desert, Plains and Ice Worlds with food names.
Click to expand...
Drawing from SMW once again I see, I anticipate the return of brown lava to indicate murderously hot chocolate.

Penguin said:
Added, though some of those just sound like the usual Desert, Plains and Ice Worlds with food names.
Click to expand...
Yeah I'm suspicious.
Z

grimshawish said:
Will we get a space world...with proper suits?

EDIT: Seriously though, bring back the pigs!
Click to expand...
They should just have a World with some themes from Galaxy. Would be really cool if they could figure out a why to implement some of the Galaxy mechanics in a 2D game.

(like launch stars and platforms that flip when you jump)
C

Nocturnowl said:
Well it is the boss music in every NSMB game so far, so really it never left.
Click to expand...
Bring back the original!
O

i had a good feeling about nsmbu. but "Layer Cake Desert (complete with melting desserts)" sold me.
G

Penguin said:
Added, though some of those just sound like the usual Desert, Plains and Ice Worlds with food names.
Click to expand...
...