GameStop: "the flood gates are open for PS4 system reserves"

A Gamestop employee sent me this and it's pretty interesting info. PS4 preorders have an "unlimited" allotment atm. I was told an unlimited amount was unheard of. 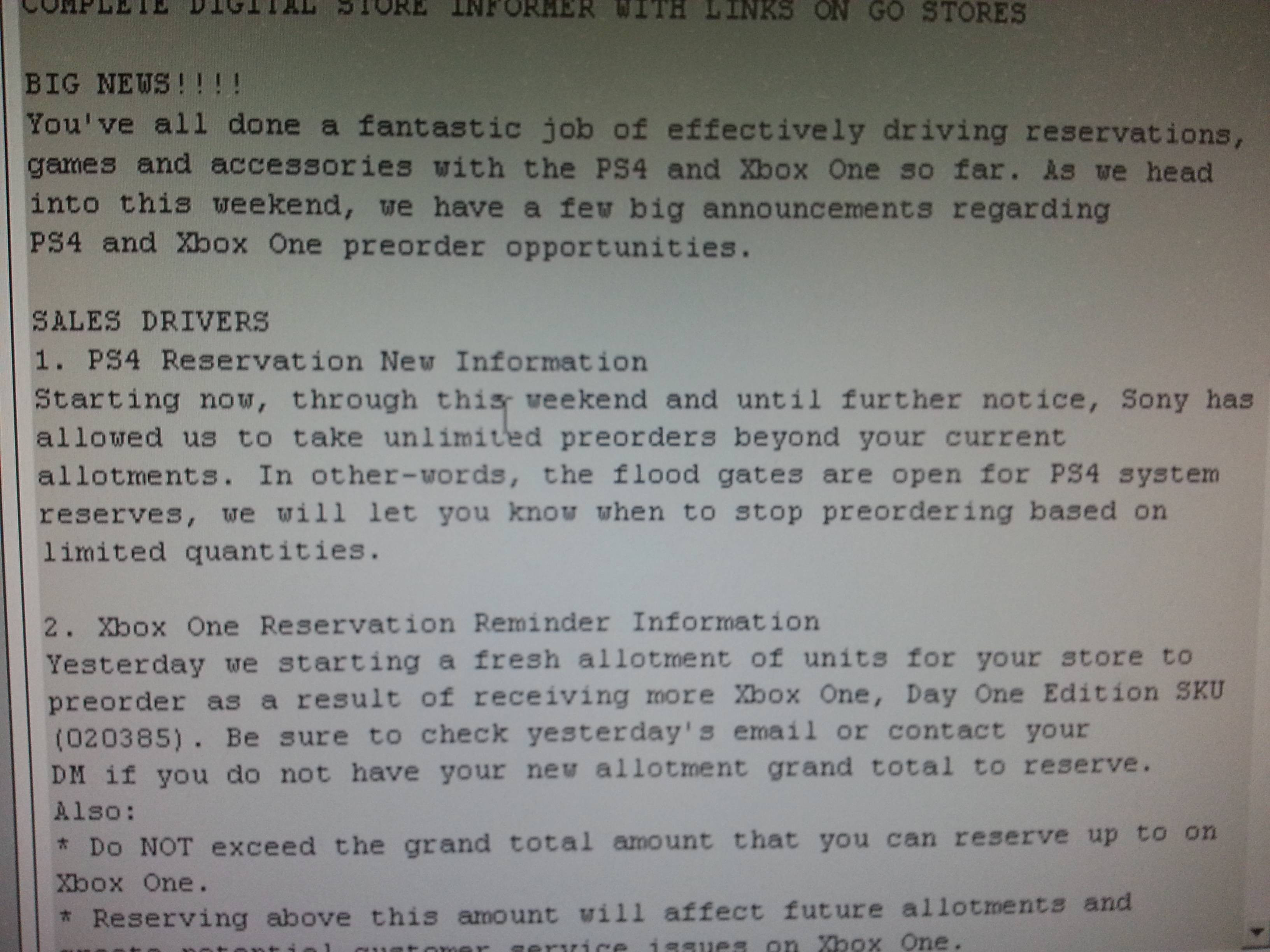 Sure, its unlimited. You'll just wait until March 2014 to get yours because you'll be in the fourth shipment by now.
C

Weird, and hard to interpret.

Unlimited until Sony tells them to stop.

Probably just an indication that Sony is confident that they can produce a lot of systems by launch.

I don't understand how this is possible.
S

I guess Sony really is intent on that 10 million PS4s figure this year lol?
O

Sounds like what GameStop did for the 360. Didn't really work out.
D

its obvious they are going to release it in october and for the big black friday push amirite.
Q

mjc said:
Sure, its unlimited. You'll just wait until March 2014 to get yours because you'll be in the fourth shipment by now.
Click to expand...

Or Sony is hitting its production targets. This is not 1990 any more they can crank these out much faster if the yields are good on the SOC. Which I bet they are.

Pretty strange, also have amazon.com updated there site for Xbox One release date to November 27 2013 - did it always say that?
C

There's going to be tears and a lot of scalpers making big money this year.

But then it wouldn't be a console launch without it.
L

yeah, no doubt. also sounds like there is a possibility this will affect amazon preorders. if gamestop gets all the stock, what happens to the people (like me) that preordered the first day on amazon. if i have to wait because sony doesn't want to piss off gamestop, i will not be amused.

my gawd.. if Sony can get this thing out in October.

Holy shit, they are gonna sell a ton of systems at launch.
J

Lol GameStop learned nothing from the 360 launch.
Z

It really does. I hope Sony can deliver, I hope they aren't just getting overly optimistic about production.

I really hope for an October launch now. If they can crank out units in high volume, then they should be able to launch early.
R

shinobi602 said:
I guess Sony really is intent on that 10 million PS4s figure this year lol?
Click to expand...

Didn't Microsoft say prior to 360 launch that historically the first system to reach 10 million units always lead the generation in sales? Seem to remember that from somewhere. Either way it is interesting to see so many preorders being allowed, but I hope it doesn't end up like the 360 launch where they didn't receive enough units to cover reserves.
G

jesus they really trying to hit that 16 mil rumor from a few months back? this sounds like it might get a little hetic

BTW, It's only unlimited quantities through the weekend. I bet they have kind of slowed down post E3.
Q

McHuj said:
I really hope for an October launch now. If they can crank out units in high volume, then they should be able to launch early.
Click to expand...

Going to be the software that holds them back. They will need every day they can for it. We saw the state of it at E3 for everyone. I am still expecting mid November launch.
T

Sony seems well on schedule for manufacturing, so they could produce a lot of units this year, forecast for how many will totally depend on the launch date though.
C

badcrumble said:
Weird, and hard to interpret.
Click to expand...

I think it must mean Sony is either very confident in their production or the initial ramp up was successful and their parts suppliers are promising solid numbers. I'd guess the latter because Sony know as well as anyone that you can't be 100% sure about how well the manufacturing is going to go until you actually start it up. Certainly at E3 and in other interviews all Sony execs seemed very confidant that the PS4 manufacturing was looking very good beforehand at least.

Or else the initial production was ok but Sony is like, whatever if we overcommit to NA then EU slids a few weeks and Japan gets pushed back to March '14.
B

Maybe sony doesnt want people who want to preorder get turned away just because the stores didnt get their allotment increased in time when they still have units. So for a short time they say unlimited but they will keep an eye on how many sell day by day and tell them to stop when they reach a certain amount or time frame. Good news

wow that's awesome news. I had an xbox one preordered, but I thought I missed out on the PS4 preorders at GS. I will be heading there after work to preorder.

I can't freaking wait for next gen!! These systems are going to be awesome.
L

I believe Sony's plan of first reveal on the 20th of Feb has really put them ahead. They've probably had the system designed and ready to go for some time now.

Couple that with MS's policy changes on DRM and I am almost certain Sony will be out the door first, with far more production.

If this happens, and momentum starts on the PS4, I don't see it swinging back any time soon. All they need to do is show some big games at gamescom and TGS and Sony is going to be on top of the industry with this platform.

GamesCOM is SUPER important for them. EU is their biggest market. If they win over the UK, the only stronghold left for MS is NA, and it doesn't look all that good for them here right now either.

If production is there, and the release date is good, Sony will dominate this gen. It's not like the previous gen where the PS3 offered more power and long term usability over the 360 so that it would catch up late gen. The platforms are extremely similar, there's no reason to be a multi platform owner other than the games. And if you launch at 500$ for 1-2 games, it's not looking good for MS.
J

Yeah, I was thinking since its all off the shelf parts they must be confident to blast through production at a high rate.
N

Methinks that Sony has had everything pretty much down pat long before E3. On the other hand Microsoft, lol...
Y

No room for eBay scalpers. Xbone is the ticket!

Going to preorder mine on wednesday at gamestop cuz a cute girl works there.
C

''its gonna be the biggest playstation launch ever''
-Tretton
S

mjc said:
Sure, its unlimited. You'll just wait until March 2014 to get yours because you'll be in the fourth shipment by now.
Click to expand...

Fucking gamestop, i was there tues morning after E3. the first day you guys took ps4 preorders. I was the first one at the store. I paid in full, I BETTER GET MY FUCKING PS4 on midnight launch day!

I'm going to be so pissed if i do not. Good thing i preorder at amazon too....
J

Feel bad for the people who are gonna get screwed and not get a console a launch because of late preorder. I am skeptical Gamestop stores will even get the initial allotment of consoles they are promising.

Just give me the date already.
K

Blah this kinda worries me. I don't want to wait on line or wait for the next 3-4 shipments to get one.
S

Can't wait to see what kinds of numbers the PS4 puts up for this holiday. It feels like anything is possible at this point.
D

16 million PS4 for this year is the rumored target? wow
J

Antroid said:
It really does. I hope Sony can deliver, I hope they aren't just getting overly optimistic about production.
Click to expand...

If Sony does, they'll have so much more units out than XBONE especially with the yield issues MS is experiencing.

More supply and cheaper is better for Sony.
S

The next gen launch figures will be titillating (lolxz)
You must log in or register to reply here.

Bo_Hazem replied
Jan 21, 2022
The PlayStation 5 Is Starting to Look Like the Revolution It Promised
Game Dev Hardware 3 4 5 6 7