Microsoft is reading this right now and is gonna change it to $399. Mark my words.
T

LuchaRider said:
Nobody can survive that, Sony should be DOA based on this
S

darkinstinct said:
I think we only learn if he still has a trustworthy source or if he has been played.
Click to expand...

I dont buy that for a second.
T

Aiii said:
At this price you probably won't have any trouble securing one on launch day even without paying Game Mania 25 Euro two years ahead of launch.
Click to expand...

I dunno man, there is always a strong xbox enthousiast scene in Holland. the 360 era was huge then, so maybe they jump back again from the ps4?
G

This is pretty great

EventHorizon said:
That strategy simply does not make sense for a premium product being released in the middle of a generation. You can't gain significant market share on price because cost conscious consumers will always buy the more affordable base models. In addition, the cost conscious consumers are not the ones who will be upgrading their existing consoles based on power. To sell Scorpio at a loss is to lose money trying to get a market the product was never designed to compete for.
Click to expand...

That's true as the scenario that I mentioned above was more or less when there was really only one SKU for a console product. The landscape is significantly different now that we have two tiers for each console and selling at a loss to make profit via software sales might not be as viable as there is a lower priced model.

I still think it will be 499, but there is a small feeling in the pit of my stomach that says I shouldn't completely dismiss 399 as crazy as they sounds.
1

Excellent stuff. This is exactly what we need more of
Click to expand...

more of what? that tweet makes him look obnoxious
D

Scorpio is gonna be $399, Im certain MS isnt dumb to release it at more than that.
Click to expand...

This was allowed to be "leaked" by Microsoft, not Geoff himself.
Y

I guess you'll know if they don't give the price at the beginning of the conf what the price is.
O

hope that means it's rad
J

Tecnniqe said:
Sony should be DOA based on this
Click to expand...

PS3 wasn't exactly a big seller at that price
D

Mauddib said:
It's as if Spencer learned goddamn nothing over the last few years. How can a company be so blind?
Click to expand...

Who says they are?
H

Fast Forward said:
Xbox One Elite is my guess.

While Xbox 10 would be a perfect bad name, like Xbox One is, I don't think they will go with that name.
Click to expand...

But there's already been an XB1 Elite with a hybrid drive.and the Elite controller. I owned it.
M

This implies the servers even survive the announcement, which is a little too optimistic IMO.
M

wildfire said:
Seeing too many of these "definitely $399 now" responses makes me realize that being a part of this community doesn't mean the average dedicated gamer is informed or that smart about their hobby.

This is Geoff and the way he manages his relationships with those in the gaming industry is very precise.

MS asked him to announce this hypekiller in advance. Geoff hedged his wording in case MS got cold feet over the negative reaction.


You really should pay attention to how he talks to people in the industry. The only time he ever put anyone on full blast was Konami because it was extremely safe to do so.

This guy will never step out of line in order to maintain his industry connections.
Click to expand...

MS told him to do so because they want the price discussion quickly out of the way before the show starts.

Fucking disgusting. I hope the entire leadership at Xbox realizes what they've done to this console when this thing flops.
J

Yeah, Microsoft will anounce the price is 399 and everyone Will celebrate.
H

PackAPunchedMick said:
Reading this thread back in a few hours will be glorious which ever way things go.
Click to expand...

kingkaiser said:
So, let me get this straight...

people in here actually think that

in comparison to a PS4 Pro will come at no extra cost whatsoever?
Click to expand...

kadotsu said:
Yes, because it is 12 months later.
Click to expand...

12 months later and 4 extra gigs of ram should be the same price?

I keep saying this....look at any pre built PC with the same specs as each other except the ram is 8 vs 12. Watch the price differences you find.

This thing is a step above the Pro. Even 12 months later.

What if.....a last minute twist they call this their next gen system. That might make $499 easier to swallow.

Everybody else coming up with some theories, might as well throw in mine.
7

LuchaRider said:
Nobody can survive that,

I don't get the idea that this is a ruse. What would it accomplish?
S

$399 was the hope but $499 was always the number I saw it coming out at. Same price as the launch XB1 but minus the Kinect limiting the horsepower.

Why would it be scummy to fake out potential leakers? It wouldn't be their fault a high profile guy like Geoff was the one to run with it.
W

Who is this for
G

The part of Brooklyn that hasn't been gentrified y

Omfg too funny. E3 is to me what Christmas was as a kid. I keep getting these awesome gifts
H

What did MS do to piss off Geoff?
Click to expand...

Not caring at leaking a price.. hmm ok maybe. But why would he be a little kid about it and post that?

Whelp, Microsoft just shot themselves in the foot with that. Did they learn NOTHING from the past? How did that work out for sony with the ps3?

Sony already has the upper hand when it comes to the exclusives and games, on top of that making it $100 cheaper than the xbox it's a no brainer.
M

If it is marketing, goeff is taking the act a bit far now lol.
dude looks like he's been half possessed by kamiya
D

Scorpio is gonna be $399, Im certain MS isnt dumb to release it at more than that.
Click to expand...

You have to also factor the ram increase and cooling solution. Those are things that make it different from pro. Which is an added cost.
T

CrimsonGun said:
The average consumer doesn't look at consoles as first place or second place machines. That's what fanboys think like. The average consumer will simply ask for the most powerful console. Which will be the Scorpio.
Click to expand...

If that's what the "average" consumer did, then PS3 would have sold more (in NA, at least), Xbox would have trampled over the PS2, etc.
S

Geoff: "they have a point. I would never leak game info usually."
Spencer: "just say you wouldn't do that to developers, but hardware don't matter"
M

I keep thinking on this...

The PS4 was priced appropriately at $400.

For Microsfts mid cycle refresh to arrive a year after Sonys at $100 more and to not take the opportunity to correct the pricing issue.....I just dont get it.

Price is the #1 most important factor. With speed to market and graphical power nearby.
A 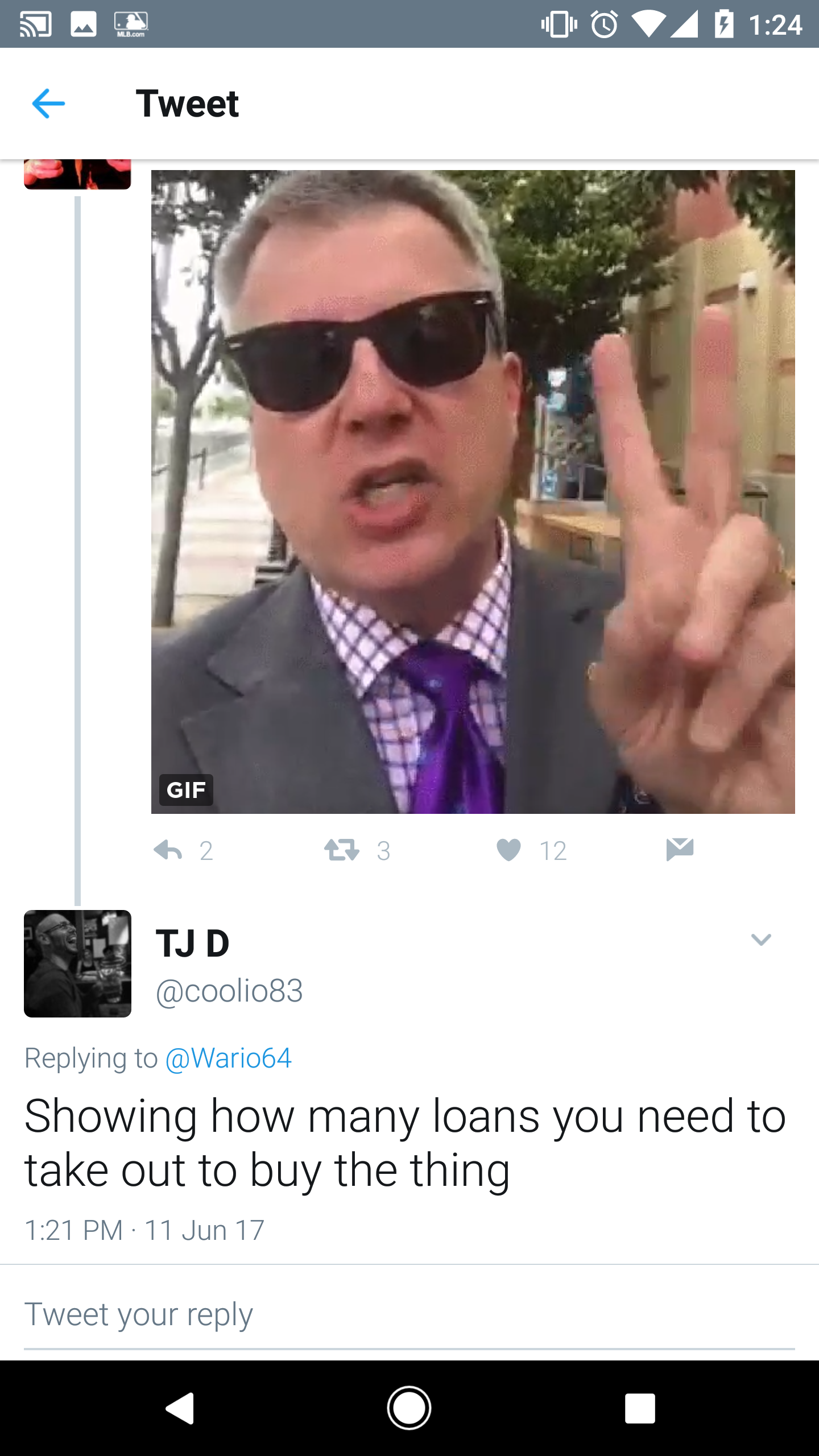 Almost fell out of my chair
A

TB12 said:
I dunno man, there is always a strong xbox enthousiast in Holland. the 360 huge then, so maybe they jump back again from the ps4?
Click to expand...

The 360 was only huge until the PS3 came down from that ridiculous high price that no consumer wanted to pay for a console (heh, irony), after that the PS3 pretty much equaled it in sales by the end of the generation. NL has pretty much always been PlayStation country, traditionally.
F

PS3 all over again.
P

You start at $299 and add a dollar for every minute the conference goes on till they announce the price.
C

geoffmk said:
Nope have not heard what configurations are -- very possible it has Elite controller in it which softens the price.
Click to expand...

Jez Corden, Tom Warren et al have already hinted they heard it was going to be 449 - 499 yesterday. You guys are overreacting.

Don Mattrick : "we have a product for people who can't get online, it's called Xbox 360"
G

He HAS to be deflecting / setting up for a $399 pricepoint at the conference, no way they price it that high!
Click to expand...

LOLOLOL now this is something I haven't heard in awhile.
J

"We have a product for people with only one job, it's called Xbox One."
K

Whelp, Microsoft just shot themselves in the foot with that. Did they learn NOTHING from the past? How did that work out for sony with the ps3?

Sony already has the upper hand when it comes to the exclusives and games, on top of that making it $100 cheaper than the xbox it's a no brainer.
Click to expand...

Pro is not a real 4k box

TheZink said:
Microsoft is reading this right now and is gonna change it to $399. Mark my words.
Click to expand...

Microsoft does not care about GAF. As far as I can tell, this is the only community that really sold itself on the $399 narrative. Thus, it's the only one that will react negatively to $499. Everyone else will be unsurprised, namely because that's what most people forecasted based on the internals.

They're not going to take a 20% reduction in revenue just to please one niche fan community that already hates them.
C

It's the price I expected. Though we'll have to wait and see if it really is the price. I suppose there could also be multiple SKUs.
You must log in or register to reply here.

Hardware Now With Xbox Series X Price Point Has Officially Been Announced To Be $499, How Much Will PlayStation 5 Cost?