The stillness of time.

Samsomite said:
How?
Click to expand...
If Google does a digital only console, its DOA. If its streaming, then it needs to compete with Geforce Now and PS Now. It has to be a traditional console aswell, perhaps a glorified Shield TV with disc based Android games, optimized for that hardware. Now that could work.

My wishful thinking is that I'd love for them to release a dedicated modern games console for next-gen, and bring some real heat with no paywall for online and some proper dedicated exclusives that manage to wow. That coupled with third party and Japanese support would have me go that route next-gen. But I highly doubt it. I hope I'm wrong though, its been so long since there was some legit competition fighting for the consumers dollar, rather than trying to nickel and dime everybody. Hasn't Phil Harrison been working over there on the controller or something?

Redneckerz said:
If Google does a digital only console, its DOA. If its streaming, then it needs to compete with Geforce Now and PS Now. It has to be a traditional console aswell, perhaps a glorified Shield TV with disc based Android games, optimized for that hardware. Now that could work.
Click to expand...
A disc bases system offering the best of Android's games would be relevant to my interests.
F

I don't know about game streaming. I just want it as another option not as the future of videogames.

The idiots over at google can barely figure out what they want to do with their own android app ecosystem.

I would keep VERY LOW EXPECTATIONS cause google has no idea what the fuck its doing and its been like that for quite a few years.

No thanks, Project Stream lagged me every now and then with a 70mbps connection. Plus its Google, don’t want them to spy on me.

turntablekeepsonspinning said:
The idiots over at google can barely figure out what they want to do with their own android app ecosystem.

I would keep VERY LOW EXPECTATIONS cause google has no idea what the fuck its doing and its been like that for quite a few years.
Click to expand...
They may not know what they are doing, but they damn sure know what you are lol!

If it's an actual console then I'm interested, if its just a streaming service then i'll probably pass. Still wanna see what games they have been working on either way.

Will games disappear from my games list if Google deems them not appropriate?

After being denied the chance to even try their project stream due to not passing the packet loss test I've tempered my expectations of a streaming console future in the near term.

As others have mentioned if this is a legit take at a console ala Sony/Microsoft entering the race so long ago now.. then this could get interesting.

I think the industry needs a little shakeup. Maybe Google can attack the revenue and pricing model in an interesting way. Console, game and online prices subsidised by advertising dollars... Yea I know that sucks to hear but imagine if the barrier to entry to all these games were lowered.. Free online, cheaper games... I dunno I'd consider it. I hate the online paywalls so much.

Then again, wheres this hardware coming from? Theres been no leaks or rumors about it.

I'll be interested in seeing what it is. I can't say I like Google as a company though.

Perhaps they finally learned to code. 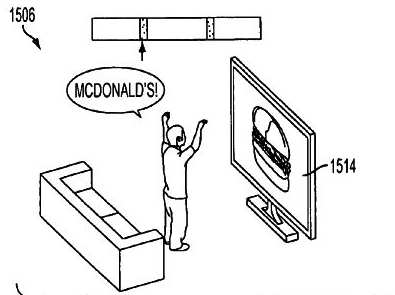 Btw, I fully expect this product to be "sunsetted" at some point in the next few years.
S

Can't wait for a console that will suggest games to me based off private conversations I have around the house.

It probably shouldn't. But this is exciting to me.

I can't stand Apple, but I like Google. Hopefully it's something good in terms of gaming. I can't trust Apple, but I'm willing to give Google a chance.

I am excited that there's more competition but less excited about Google being it. I have grown to dislike Google's products and have almost finished "De-Googling" my life. Their support for products is also sketchy, even for their popular ones like Android. Just this year I have bought my very first iPhone and I am quite happy with it. Apple also makes mistakes and it is not a perfect product but Apple seem to know what they want to do with it, at least.

If I had to choose a company trying their hands in the console business, I'd rather choose Amazon (they have game devs already and are also set up for the necessary online infrastructure) or Samsung (they have a lot of hardware expertise and I believe they could get the Korean gaming industry behind them for support). But I can at the very least appreciate that Google might shake some things up, which is nice. I just hope that they lose interest in it, like they have with many of their other products.

onQ123 said:
It's not streaming only they will have a console
Click to expand...
where did you get that from?
E

I want to see what MS will do because Google will direct compete with their plans.

While that Sony and Nintendo probably will follow the same path they did up to now that is different from what MS and probably Google wants.

Can Google really give a serious blow on MS plans? Let's see how it turn out.
H

JG07 said:
That was a good teaser trailer; really excited to see what they put out there. After all, this is Google we're talking about. This isn't some joke thing like that Project Cars console or Ouya. This is one of the wealthiest technology companies in the world seemingly ready to do something with video games. I'm excited to see what they have in store.
Click to expand...
Uhh they half ass everything and give up on it when it doesnt immediatly take off. I have zero faith in Google.
M

I don't like Google owning everything, all the data gathering and ad services. I find it too agressive.

The more competition the better. If any one can bring some serious heat it's Google. They could probably destroy Sony, Microsoft and Nintendo. I fail to see how anyone can't be excited about this. If you like games then you should be happy about this.
Click to expand...
Imagine all the user data the Google could steal. I'm all for new consoles arriving, but google as a company is a wolf in sheeps clothing.
E

Really thinking about it, seems google is more so gonna compete in whatever space Microsoft is going with the Xbox rather than what Nintendo or Sony is doing. This is gonna be interesting.
D

Ten_Fold said:
Really thinking about it, seems google is more so gonna compete in whatever space Microsoft is going with the Xbox rather than what Nintendo or Sony is doing. This is gonna be interesting.
Click to expand...
Sony has the technology and infrastructure to run game streaming since they have been doing it for 5 years, but they know native playing probably isn't going anywhere long-term. Microsoft believes it has the ace up the leave meaning they can choose to stop supporting Windows sometime in the future natively, and offer either streaming, virtual desktops, or win32 application layers in the cloud. Its not about gaming, its their ability to process in the cloud and charge a subscription. So... what happens say in 2024 and Microsoft sends end of life notices out to Windows/Xbox users letting them know no more Windows and Xbox update or new versions? They only than offer to do processing in the cloud for a subscription. If you have digital software and games they can process them in the cloud, meaning give you a Virtual Desktop or play your Xbox library.

Although, Amazon offers WorkSpace for virtualized windows desktops what happens if Microsoft stops Windows upgrades/updates other than what is offered on Azure?

The world needs to come up with solutions to running win32 outside of Windows, there are some ways to do it, but they are not ideal at the moment. Here is everyone's future (a few years off yet) for running win32, uwp, or xbox i.e. subscriptions.

Lot of sessions going on about this reveal, over the week. Should be more than just a streaming service right? 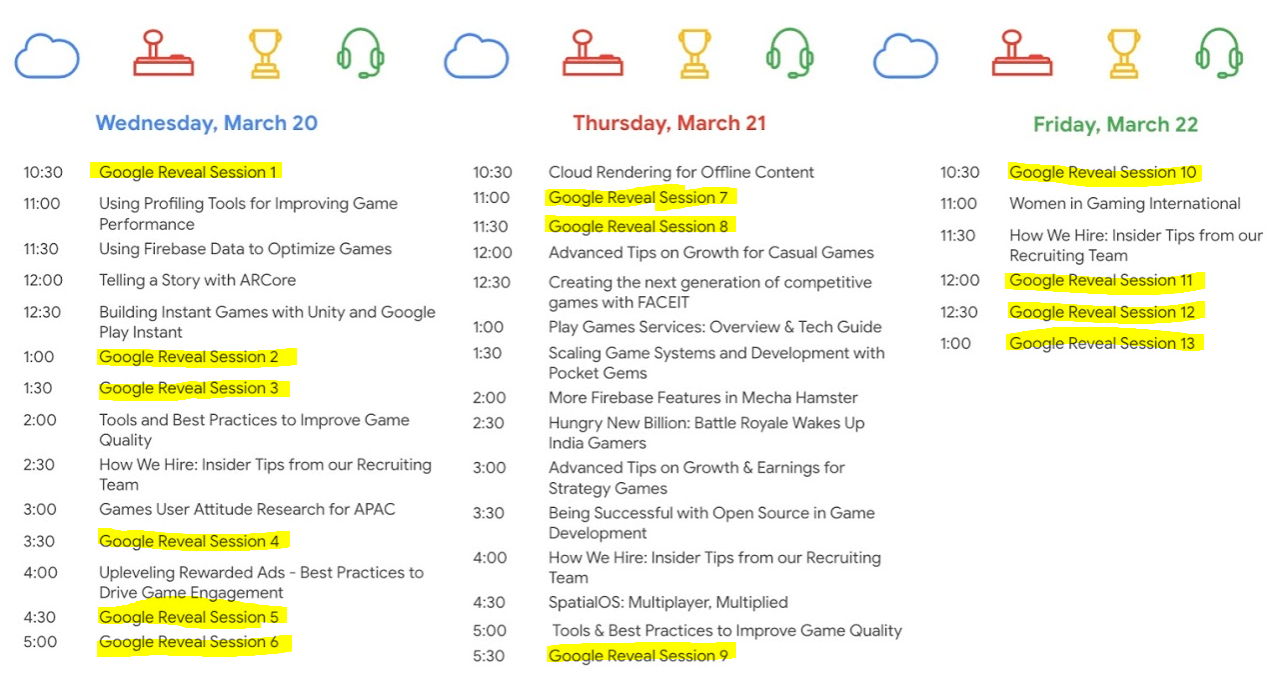 I wonder if this will be more than a glorified Chromecast that comes with a bluetooth controller. I would expect Google to try and utilise their own worldwide network for content delivery and I can't imagine a company like Google making a media or even download based console.

sandkiller said:
Lot of sessions going on about this reveal, over the week. Should be more than just a streaming service right?
Click to expand...
You have got to remember that this is a developer conference, all of those "Google Reveal Sessions" might just be developer talk on how make your game feel less shit with input lag that haven't been named properly yet because spoilers.
Last edited: Mar 18, 2019

I really hope it's a console.

Also, anyone else got predictions for release? This year would be fine as it'll be yet another way of gaming until the beasts of PS5 and Xbox 2 roll up next year.

What I'm really hoping for:

sandkiller said:
Lot of sessions going on about this reveal, over the week. Should be more than just a streaming service right?


Rings some bells?
A

I think this will be a subscription-based, streaming box...basically the future MS are going for with GamePass

These cheap subscription models are a breeding ground for mediocrity. They can all fuck off.