The 3DS version has now passed the Android version as well. Here's an updated graph for almost two months 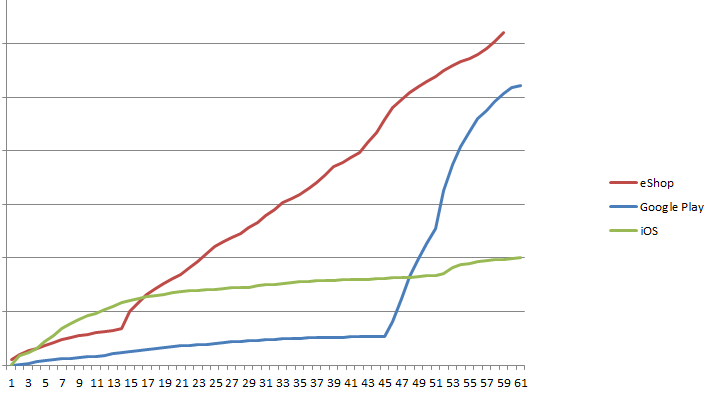 The game did get featured on the front page in the eShop in both markets a few weeks ago (day 43) and you can see a pretty clear bump that week, with about 2x a normal week. It's not quite at the same level as getting on the front page of Google Play, during the weekend it was about 50% of what the Android version did on average when it was featured. I guess the market just isn't quite as big, but it also means that your less dependant on getting promoted by the store owner. While it was a nice bump and I'm thankful to Nintendo for doing it, people seem to be able to find the game just fine when it's not promoted as heavily.

What's really incredible is the legs so far. There's been a few smaller bumps to help maintain the sales; nintendo posting the trailer on their youtube channel, this thread getting reposted on every nintendo website etc, but some of them are hard to see amidst the normal weekend bumps. The game has also been included in various lists on the eShop almost every week. But so far there's hardly been any signs of the sales slowing down, I'm sure it will happen eventually but I'm hopefull it will be a slow decline.
K

Wow, the progression is pretty much linear, it ain't slowing down.
Q

Wow, congrats man and its more than deserved, other devs and publishers could learn something from Gunman Clives pricing strategy.
S

cw_sasuke said:
Wow, congrats man and its more than deserved, other devs and publishers could learn something from Gunman Clives pricing strategy.
Click to expand...
And yes this eShop devs need to price more smarter for certain titles.

3DS Version is the Best Version. the d-pad and buttons make all the difference.

I havent touch the android version since trying the 3DS, also it looks amazing on 3DS

I hope you develop other games on eShop Beril. I feel kind of bad as was going to buy the game but I got a code from you so got a free copy. so consider me buying outright your next game for the 3DS to make up for it.

as CW stated above the price for this game is right.
N

Congrats, it's an awesome and affordable game.
I really hope this encourages you and other developers to offer more good games for a better price.
V

Holy shit that graph! Congratulations!
Amazing how the eshop seems to have strong consistent growth.

Well done. I completed it last night. Good stuff; was surprised just how many different features the game included.
C

Ha! Great for you

Congrats, beril. Gunman Clive is a great game, and your success is well deserved.

Keep up the good work.
M

Congrats on the good sales.

A mod should change the thread title to: "News flash! eShop game outsells both iOS and Android! Nintendo un-doomed?!?"
G

Been playing it off and on lately, really been enjoying it. The second set of levels remind me a lot of the NES Mega Man games which is a good thing.

Doczu said:
A mod should change the thread title to: "News flash! eShop game outsells both iOS and Android! Nintendo un-doomed?!?"
Click to expand...
Nintendo is always doomed even when they win, because winning is just a Fad
R

congrats beril, still haven't download myself yet, will do soon though
J

Congrats Beril and thanks again for giving out codes in the beginning. I had a lot of fun with the game and hope that it continues selling well.
M

Congratulations, Beril! It's also very interesting to see those graphs, so thanks for sharing them!
B

I bought it on 3DS a couple days ago, happy to see I somewhat contributed. The game was great, albeit a bit short. But that's only regrettable because i was having a lot of fun with it. And duck mode is so random, it's amazing rofl.

You're in a good position for your next game i'd assume, and i'll be looking forward to it
E

Congrats!
Which version is the most profitable for you?
What programming languages were used?
S

I hope your success means we'll see more games for 2 bucks, the price on some of the games is ridiculous.
6

It's dirt cheap on eShop, which put me off at first thinking it'd be a bit shitty, which is just because everything on eShop is more expensive and that's just a weird instinctual reaction. I'm totally buying this though now I know it's not. Congrats!
J

Good news. Would love to have a vague idea of how many copies this is selling as I've no idea what it takes, has the Google Play or 3DS outsold the 100,000 free copies given away by Amazon? I'm assuming those weren't counted on the pie chart.
G

Beril, I would like to think the reason your game is selling well isn't just prominence on the front page or news articles, but the fact you've made a really good game. Developers could easily turn in half-arsed efforts and promote their budget price as a reason to buy, knowing people would shell out a few dollars. But Gunman Clive is one of my favourite eShop releases and I'm looking forward to your future titles.
M

GRW810 said:
Beril, I would like to think the reason your game is selling well isn't just prominence on the front page or news articles, but the fact you've made a really good game. Developers could easily turn in half-arsed efforts and promote their budget price as a reason to buy, knowing people would shell out a few dollars. But Gunman Clive is one of my favourite eShop releases and I'm looking forward to your future titles.
Click to expand...
People are just waiting for a game with ios/android price point on 3DS (now with good control) it seems.

jwhit28 said:
How could you not buy it for $2?
Click to expand...
Arguments have been made that Balloon Fight VC was overpriced at 30¢. Just sayin'.
W

Does anyone know what the day 13/14 big bump was due to? That bump looks like it really set the game's current trajectory in motion.
A

Congrats! I had no idea the developer was on GAF. I've actually been eyeing Gunman Clive since it is one of those 5-star games on the eshop. Now I will definitely pick it up.

I'm fascinated/surprised by that graph. I would not have expected consistently strong sales on the eshop. Then again, I found it pretty easily when looking for something to play on there - it was a game that kept popping up on different searches.
G

grimshawish said:
.
Click to expand...
Cool thanks, that makes sense.

Santiako said:
I hope your success means we'll see more games for 2 bucks, the price on some of the games is ridiculous.
Click to expand...
yeah, me too.

Hey Terry Cavanagh, you already launched VVVVVV, launch Super Hexagon and its BOUGHT. I have reached over 100s in all stages, but I don't care, I will play and beat that thing in 3D.
D

Congratulations Its really a great game and deserves every penny.
Z

Congrats, man. Gunman Clive is my favorite eShop game after Pushmo. I'm glad to hear the 3DS version is doing so well. The game is awesome.

I'll have to get this later today when I get home.

I love the price point!
K

you gonna release it for japanese eshop?
J

I recently double dipped on the 3DS version because of physical buttons. Plays much, much better.
G

Congrats. I hope more end up enjoying it as well
L

Yep, first thing I bought from the eShop when I got my 3ds XL a few days ago.
S

Well I am not surprised since the game cost £1.99 and it was actually good, since it felt like a Mega Man game plus playing as a duck was fun. I do hope you make a sequel.