Hackers behind anti-doping leaks: Please write about us! Well give you exclusive

And so the propaganda game continues.

This morning, Ars received an odd ask by Twitter direct message: "Hello, we are Fancy Bears' Hack Team. Are you interested in WADA and USADA confidential documents?"

Fancy Bears HT is the front for the hacking operation that spear-phished International Olympic Committee members to gain access to the systems of the World Anti-Doping Agency (WADA). Those records were leakedand in some cases, according to WADA officials, modifiedin an effort to discredit the Olympics' drug-testing rules. The leaks were seen by officials as retribution for the bans imposed on Russian athletes after widespread doctoring of drug tests by the Russians at multiple Olympic games was exposed by a WADA investigation.

The Federal Bureau of Investigations and an outside information security firm are still investigating the breach. But officials have indicated that, as in the WADA breach, the perpetrators are in some way tied to the group behind part of the network intrusion at the Democratic National Committee and the hacking of e-mail accounts of a number of political figuresincluding Hillary Clinton's campaign chairman, John Podesta.
Click to expand... 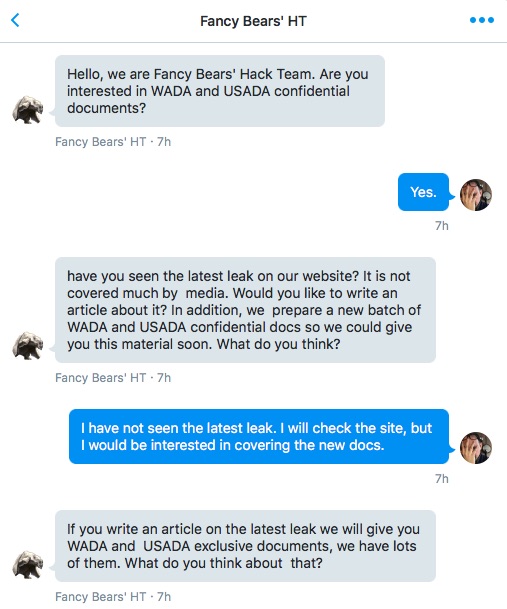 At this point they are just taking the piss.