How Low Will the Price of PS4 Go?

Of course, there have been deals, bundles and temporary price drops, but in this thread, I'm only concerned with official, permanent price drops.

Although historical data does not offer a good indication of the future, I still thought it might be interesting to take a look at both the historical MSRP data of all past PlayStation consoles prices and I also found most of the console unit sales which I have collated into the following charts: 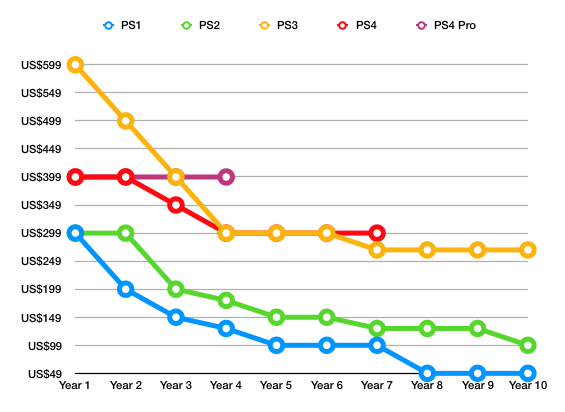 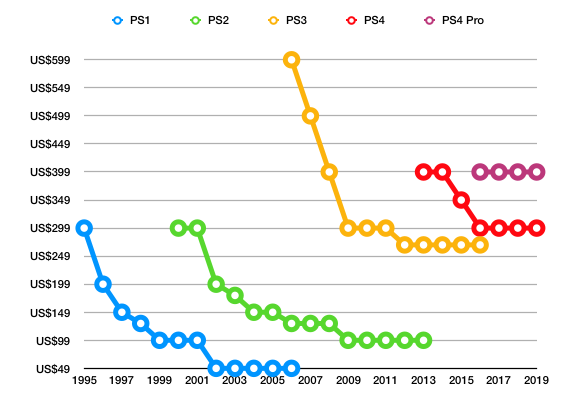 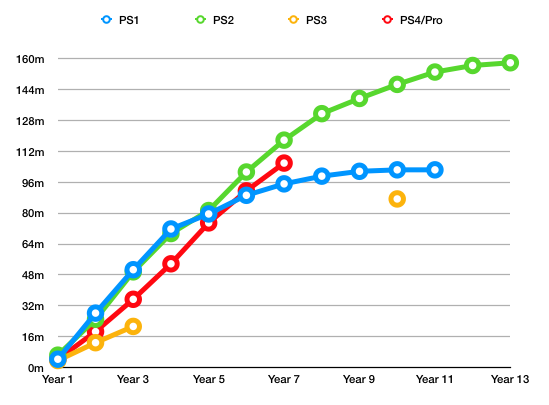 *Quarterly sales data of PS3 of years 4-9 not available

I believe Sony combine the sales of the PS4 and PS4 Pro, but it's suggested that PS4 Pro unit sales have been about 20% of total PS4 sales since the PS4 Pro's launch in 2016.

Whilst I would like to see a PS4 Super Slim released at a $199 price point, I have a feeling that Sony will not do this, and continue selling the PS4 Slim at $299. I think they will do this in order to accelerate the adoption of PS5. I don't know how interested Sony are in making PS4 the "most successful console of all-time", or whether there is any possibility of this happening, even with a $199 PS4 Super Slim. The 3rd chart suggests it's not possible for PS4 to reach PS2 levels, but a PS4 Super Slim at $199, along with games such as Ghost of Tsushima, Cyberpunk 2077, FF7:Remake, The Last of Us: Part 2 in 2020, and a big marketing push into developing markets might see them coming close if Sony continue to market PS4 as long as they did the PS2, which was on the market for a record 13 years.

Either way, it seems Sony's window for PS4's final flourish is fast approaching. No other generation in PlayStation console history has a console gone 4 years without a price drop like we have seen with PS4. Perhaps Sony are satisfied with their new strategy of introducing retailer/seasonal discounts.

Anyway, what say you GAF? What do you think the final price of PS4 will be by the end of the gen?

Bonus: How many PS4 consoles do you think Sony will sell what all's said & done?
Reactions: osiris_128bits and Celcius

if you look at the graph though other than that the PSX, 2 & 4 all seem very consistent
Last edited: Tuesday at 5:55 PM

Im guessing the msrp will hover around $199 for a few yesrs before stores start dropping as clearance once the support ends.

i believe the ps3 super slim was at $169 before being fully discontinued? (This isnt including sales or rollback prices from retailers like walmart or gamestop.)
T

if you look at the graph though other than that the PSX, 2 & 4 all seem very consistent
Click to expand...
No they don't. It's only consistent with the PS3

I'd like to see one with the time value of money taken into account though. That would probably be closer.
Last edited: Tuesday at 6:12 PM

I’ve been wondering this myself. With the position that Sony is in, I don’t think they’ll drop PS4 pricing until ps5 launches. PS4 still sells so well that dropping the price early would just be leaving money on the table... Xbox one is no cheaper.

I'd love to see a superslim model 1 199 ...maybe even due a couple of color variants. IF it happens, it won't be until the PS5 launches. The PS4 is a great game/multimedia machine to have and could still be supported at least on the indie front for a few more years.

Trogdor1123 said:
No they don't. It's only consistent with the PS3

I'd like to see one with the time value of money taken into account though. That would probably be closer.
Click to expand...
Dude the PS3 drops hard where as the X,2 & 4 are almost the same

Taking a guess, might see a $50-100 price drop temporarily but not until after all the trade in deals for PS4 > PS5 and they get rid of all those extra "refurbished" systems

Roitorb said:
Dude the PS3 drops hard where as the X,2 & 4 are almost the same
Click to expand...
The PS4 is consistently 100-150 more than the PS2 or the PS1 for the majority of their life spans. Thanks a hardly the same.

I have seen a lot of 250€ deals around end of november/december, but with the PS5 on the horizon I don't think the console is worth much at all.

If the PS5 offers full backwards compatibility, you'll probably be able to pick up a used pro console on craigslist for $100 or less shortly after the new one launches.
You must log in or register to reply here.
Share:
Facebook Twitter Reddit Email Link
Top Bottom