I found a vagina in Watch Dogs 2 and Sony suspended me (Update: Ban lifted)

These collectables are getting out of hand.

Seriously though, I understand if people are offended by the implications of 'indecent exposure' in games but hey as long as it knows it's an adult-targeting game and handles it properly, then what its assets emulate are fine in my book, there is a difference between nude and lewd. Question is if Ubisoft actually authorized this or it was some stray dev. (Veeeery high chance this was not unanimously planned lol.) Also, ESRB didn't catch this??

Anyhow, sucks for you OP!! Thankfully the suspension's only a week but it's still a week...the fact that Sony tracked you down from an online post does sound a wee boorish but, well, it's touchy, this kinda thing..!!
Click to expand...

It's been shown in this thread that it was noted by ESRB.

The real issue is OP being banned for a bullshit reason.
B

Stigfinnare said:
Share a 'gina and you are out but please go ahead and bash someones head in!
Click to expand...

You're right, it's much better to drop a toilet on someone.
E

Why is extreme violence okay but nudity is not?
We can kill a shit load of people in the most graphic ways possible but not show any skin?
It's not like there are any sex acts occurring, they're just nude.
So the nude human body is inherently sexual?
What a dumb fucking policy, it's in the fucking game.
R

_woLf said:
If this is true, that indicates a much more significant problem that should have the ESRB on Ubisoft's front door pretty soon.
Click to expand...

RockmanBN said:
Didn't GTAV have penises in it?
Click to expand...

They already had one in GTAIV's dlc but vaginas have always been a big no, no. Even mostly in movies

maybe noone had challanged the esrb until now
C

Games now at HBO levels of nudity....
I

Guarantee I'm going to screw up this post? Yeah.

Yeah, this shit will never make sense to me.
K

I appreciate Ubi going natural though. None of that body fascism.
A

As for "first vagina in a game," don't you briefly see a hairy pussy in Red Dead Redemption when you walk in on a couple having sex?

Granted you're not seeing labia and the actual vagina and stuff. But still.
A

Oh word, you can get a blowie in this too? Man, I'm gonna leave work early this is an open world I can get behind.
D

This isn't hidden so I don't know why the ESRB wouldn't already know.
P

Tagyhag said:
For what purpose Ubi.

Why not? Stop being such a prude. It's pixels.
S

If you posted it to twitter via PS4, so that it shows in your PSN community feed, you fucked up.
B

Enter the Dragon Punch said:
this too. NSFW
Click to expand...

The game is rated appropriately for this type of content. I don't see a problem with it. This isn't Hot Coffee Mod 2.0.

OP shouldn't have been banned for something that was normally present in the game.
F

LOL this thread is going to be one of the greats.
Z

Where is our resident low poly gynecologist? (Apologies if he already is here, thread is moving too fast for me)
F

The only difference is this turned out to be an actual vagina in the texture file.
U

Skateboard P said:
That's kinda disturbing. Why would someone put that in a game?
Click to expand...

I read through that one. What a trip it was.
K

Enter the Dragon Punch said:
this too. NSFW
Click to expand...

Not a gaffer.
I

Doesn't have a vagina in the game make it a rated 'A' for the base game?

People can always buy the game and not patch it? Wonder if it will be like GTA SA hot coffee and explode the internet then make the game rated 'A' lol
C

what the fuck. ya this a problem
K

I'm confused. Was this shared on Sony's network or just on Twitter?

Quite a hairy situation Ubisoft put you in, OP
P

Are genitals part of every citizen model or just added on nudists and prostitutes?
G

If the image was posted here and on twitter, why is Sony banning you?


Lighthouse said:
what the fuck. ya this a problem
Click to expand...

I looked on the ESRB website and nudity is there soo

I guess it's ok? Don't know why sony would ban you


Grimsen said:
If the image was posted here and on twitter, why is Sony banning you?
Click to expand...

Maybe when you link accounts there's an agreement?
P

The trending section on my Xbox One feed about to get a whole lot more interesting when watch dogs 2 officially releases..
S

ItsTheNew said:
Quite a hairy situation Ubisoft put you in, OP
Click to expand...

Brb buying this game and taking system offline before its fixed.
K

Morrigan Stark said:
Because you posted on... Twitter? Wut? How do they even know it's you? Or was it through the PS4 sharing/twitter connection thing?

Kind of stupid that they'd ban you for this regardless, but at least it's just a week-long ban and not permanent, I guess... :S

Edit: also, being nitpicky, that's a vulva not a vagina
Click to expand...

test_account said:
How could Sony ban you from sharing on Twitter? Those services should be completely seperated as far as i know (i know that you can share directly on Twitter from PS4, but still, you're not sharing on PSN).
Click to expand...

The share function on ps4 is used to propagate your Whats New PSN feed. So when you press the share button to post on facebook, twitter, YouTube, etc... it automatically adds that post to your PSN feed so all your PSN friends and followers can see it on their Whats New feed at which point any of them can flag it for Sony to review by hitting the report button. 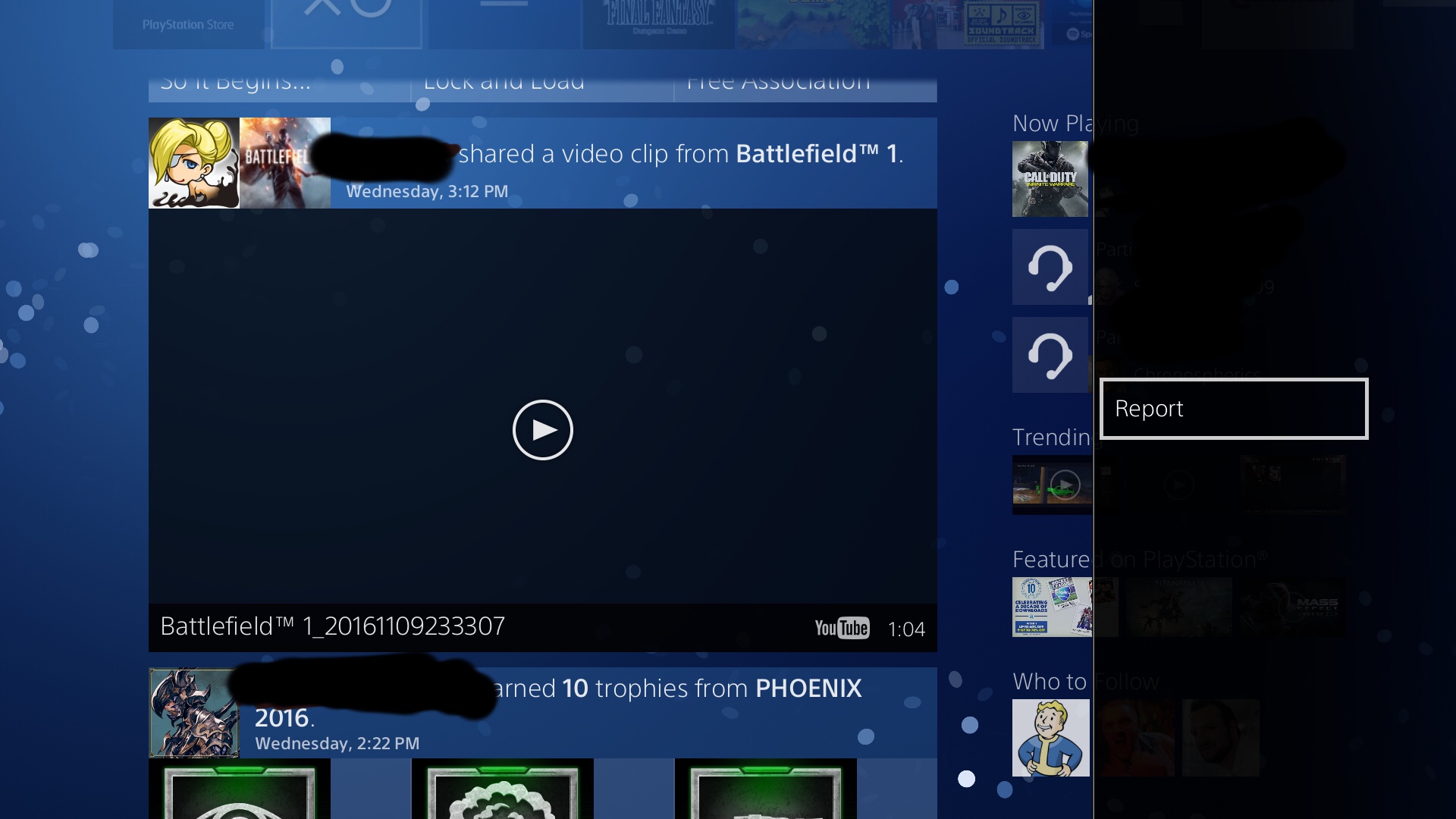 It definitely did, I remember being surprised when I saw it.
J

wtf at sony how are they going to ban you over that especially considering it was on twitter. it's a game released on their console and their console has a share button for things like this.

Rebel Leader said:
I looked on the ESRB website and nudity is there soo

Yep! I didnt realize they would have nudity in this game but i guess they are going full monty on this one.
N

Enter the Dragon Punch said:
no, you can find nudists with fully rendered full frontal nudity in the game

again, VERY nsfw
this too. NSFW
Click to expand...

What I really want to know is, do these allow custom soundtracks, or did Ubi actually put a No Use For A Name song on their soundtrack? Mind fucking blown if they did.
A

That's not a real vagina.... where are the balls?

Well it sucks but the attitude of Sony is understandable.

And I'm 100% for nudity in games, in Europe this games is 18+ (dunno about usa) so nudity, yeah sure why not, as said many time, blowing people's heads but not showing nudity is hipocrit, it's time to stop that hypocrisy imo. As long as the rating fit the game content of course.
T

Wowfunhappy said:
I'm confused. Was this shared on Sony's network or just on Twitter?
Click to expand...

it's true. and that was what, 2 years ago? Nobody made a big stink about Outlas, and I think that was way worse than this by far.
I

HBO games presents
You must log in or register to reply here.

Jan 7, 2020 started MiyazakiHatesKojima
Jan 7, 2020
EightBit Man
VICE: It's only a matter of time before Sony kills access to PS3 and Vita games entirely.