Colin Moriarty said:
Reliable sources have confirmed to IGN that there were layoffs at Sony Santa Monica Studio today. The Sony-owned, exclusive developer &#8211; founded in 1999 &#8211; is best known for its God of War games. The extent of the damage remains unclear, though there are indications that one of the projects the studio was working on has been cancelled alongside this round of layoffs.
Click to expand...

Update: Sony has provided the following statement to IGN, confirming what our sources have told us:

SCEA can confirm that we have completed a reduction in workforce at Santa Monica Studio. This is a result of a cycle of resource re-alignment against priority growth areas within SCE WWS. We do not take these decisions lightly. However, sometimes it is necessary to make changes to better serve the future projects of the studio. We have offered outplacement services and severance packages to ease transition for those impacted.
Click to expand... 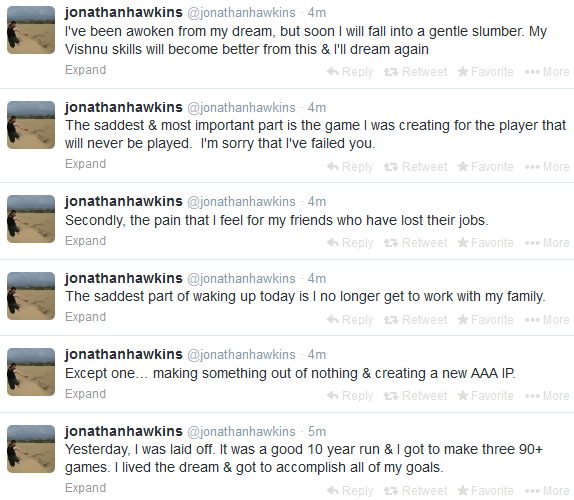 @GrumpyGamerGuy I'm not sure. But the IP is canceled.
Click to expand...

According to our sources, a majority of layoffs consist of key staff that were working on Santa Monica&#8217;s new IP, the project now more or less scrapped into oblivion. While details on the project are scarce, we&#8217;ve been told it was a science fiction title not all that far removed from Bungie and Activision&#8217;s Destiny, and a very large project at the studio, with sources expressing very positive enthusiasm for the project&#8217;s vision and potential. We&#8217;ve also been told that after Destiny was formally revealed parts of Santa Monica&#8217;s sci-fi project underwent rather significant changes, the original vision apparently quite similar to what Bungie is cooking up, changes applied to distance the two. Based on information supplied, we&#8217;re lead to believe the choice to divert Santa Monica&#8217;s project away from Destiny comparisons lead to somewhat troubled development, the studio unable to fully get the project back on course, ultimately culminating in its cancellation.

Hard times in the gaming industry.

Here's hoping everyone lands on their feet.
C

No one is safe.

nooooo! i wonder what was cancelled??
L

I wonder them moving had something to do with it?
C

Damn, hopefully not too many let go. Hope they find new jobs quick.

And hope it wasn't something too awesome that got canned.

I did not expect this. Or maybe I should've. Ascension was just a poor idea. I sure hope they didn't can the NOT God of War project, because by jobe I've had enough of that crap.

Wha..? That sucks. Hope they land somewhere and I hope it's not a lot of people affected.
F

Wow, that's unexpected, what with their new site and job openings and whatnots. I wonder if it was a large-scale project (i.e. GoW type) or a smaller indie-like project.
S

Stig's game should be too far along, a GoW sequel is too easy money, so Barlog's joint?

Better not be.
A

surprising to say the least...damn

No. Why is this happening... Irrational was enough for the month.
N

What is Shuhei Yoshida doing?!
P

Was it Stig's game?

I have a feeling this will become even more prevalent in the near future. To much bloat and bad management in the AAA space and unfortunately the workers are going to be the first to deal with the consequences. Sucks, hopefully they can create a lot more smaller studios and make games.
S

btkadams said:
nooooo! i wonder what was cancelled??
Click to expand...

Stig's game? It was in development for a long time and no one even teased it or anything....
S

Strange.. those guys are constantly hiring aren't they?

StuBurns said:
Stig's game should be too far along, a GoW sequel is too easy money, so Barlog's joint?

Also looks like the video showing around the studio has been made "private". There they talked how cool of a place it is to work amongst other things IIRC.
W

ah shit, I hope the cancelled game wasn't the next God of war. Such a talented studio.
Z

What led to this? I thought Ascension did ok?
B

Hope every lands on their feet, the games industry is really good at helping out one another in these situations. Lots of good talent. developers!
E

wat. they were talking scaling up for barlog's game so recently.
P

Doesn't SSM help out a lot of different studios and stuff? Maybe it was just a small time thing they were helping out with and canned it, and not a big project.
R

Goodbye The Last of Us 2 and any chance of TLoU1 on PS4, I'll never get to experience any of your universe.

Oops, I suck. This Sony world is bewildering to me so far.
N

What the fuckity fuck?
R

What the hell? They just posted hiring ads recently and I've talked to a few people that work there and have said things are going great.
V

I can't understand first-party closures/downsizing. Sony's got three platforms they're trying to support - don't they need all hands making as much content as possible?

If it's in response to Ascension - the problem with that game was not with the developer, it was with a franchise that had seen its logical conclusion and was fatigued.
S

I guess Sony doesn't feel the pressure to build exclusives at this point.
G


RedRooster said:
Goodbye The Last of Us 2 and any chance of TLoU1 on PS4, I'll never get to experience any of your universe.
Click to expand...

I imagine this is in response to GoW: Ascension ?
B

Shitty - though if cutting God of War, I will admit I was growing weary of those titles and would hope Sony is planning to transition talent to a new IP.
N

Neuromancer said:
What is Shuhei Yoshida doing?!
Click to expand...

What? How is this his fault? Unless I missed something then slap me.
J

Probably a title that just wasn't working out, I'm sure the principal players will still be there.
F

Well, this was out of left field.
M

RedRooster said:
Goodbye The Last of Us 2 and any chance of TLoU1 on PS4, I'll never get to experience any of your universe.
Click to expand...

El_Chino said:
I imagine this is in response to GoW: Ascension ?
Click to expand...

Slow response if so.
P

If true then my best goes out to those affected.

I just applied for an internship there too....
S

Feel sorry for everyone who lost their jobs

Sucks though. I wonder what their project was

This is odd, with the momentum Sony has going and all...
U

I am betting this was a result of all the stock stuff that happened. I am pretty sure Sony is still slimming down everything company wide. Maybe this was just a bunch of people working on an idie title or something. Hopefully not anything God of War related!!