jett said:
If anyone deserves to be get screwed it sure is Cory Barlog.
Click to expand...
What? He made Sony Santa Monica's best game to date, God of War 2.
S

Nirolak said:
I'm actually assuming the project they kept is God of War 4 by Cory Barlog, since I got the impression that Stig's project was just in pre-production for ages while most of the studio made God of War: Ascension.
Click to expand...
I really hope you're right, seems to make sense.

All the best to any of the guys and gals out of work, hope you fall on your feet.
T

It can't have been Corey's game that was cancelled, can it? I mean, they only just re-employed the guy about 8 months ago, so to then squash his project would seem odd. Unless it was still in prototyping stage and Shu didn't like how it was looking? Stig's game must be in development of some kind for over 3 years, so it's probably too far along to cancel. Which leaves what? I mean, they're moving to a bigger property and just had one of those development videos saying how awesome SSM is, so the timing seems odd. Maybe this is out of context and it was an SSM-produced smaller project (a la Sony Smash Bros. or The Unfinished Swan). I dunno. I feel like we need more on this before jumping to conclusions.

famousmortimer said:
Genuinely shocked. And bummed.
Click to expand...
Any info about the canceled game?
T

Aren't games more popular now and selling more than ever? If so, why are we hearing news like this and news of big studios closing their doors?

Perhaps a large chunk of that record game sales money is coming from the casual/mobile market. A larger chunk than many hardcore gamers would like to admit.
N

stuminus3 said:
Its OK guys Shu has a funny Twitter account and he seems like a cool dude I wish he was my friend I bet we'd get along great.
Click to expand...
I like him but at the same time I've never forgiven him for Studio Liverpool. =(
S

RoboPlato said:
So weird. The studio is expanding and hiring still. Maybe they were letting some less experienced employees go to make room for more new hires?
Click to expand...
Hmm if the loss of a project is true I would assume one of the games was taking too long or not compelling enough in Shu's eyes to continue.

Either way it sucks hard
T

...the fuck?!?! Here I thought SSM was an untouchable golden child.
J

Anticitizen One said:
I bet the new IP was cancelled and there only making God of War 4 now
Click to expand...
I can't see them making another GoW, seeing as how Ascension flopped terribly.Also, unless Stig was one of the members let go I dont believe his project is the one cancelled. My guess is it was a new project that was being worked on by the Ascension team.
V

Damn, I really want to see that non-God of War game.
C

famousmortimer said:
Genuinely shocked. And bummed.
Click to expand...
Any idea what project took the axe?

I'm assuming the rumoured VR thingy wasn't it.
I

This is probably Todd Papy's team (Ascension). He left a while back.
N

This is a result of a cycle of resource re-alignment against priority growth areas within SCE WWS
Click to expand...

Sn4ke_911 said:
What? He made Sony Santa Monica's best game to date, God of War 2.
Click to expand...
He also left SSM out to dry when he left them out of the blue during production of GOW3, which is why we got the game we got.
S

teknix said:
Aren't games more popular now and selling more than ever? If so, why are we hearing news like this and news of big studios closing their doors?
Click to expand...
"Games" aren't uniform. God of War: Ascension was a disaster for one.
V

And so new agents sent out to infiltrate other studios were born.
Good luck to them all.
A

Last studio I expected to see hit with layoffs. Such a talented group.

I feel for them, however I'm optimistic they'll find work quick by having SSM on their resume.
R

infiniteheteroskdasticity said:
This is probably Todd Papy's team (Ascension). He left a while back.
Click to expand...
This actually would make sense. Maybe the ones left couldn't hold the project together. It would be absolutely massive news if Stig or Barlog's games were cancelled.
X

Trevelyon said:
...the fuck?!?! Here I thought SSM was an untouchable golden child.
Click to expand...
No studio for any of the companies should be considered untouchable.
T

Wow, it seems the best way to not get fired is working for Nintendo.
B


which project? Please tell me it's some minor colab project and not the Stig or Cory projects

Any insiders? Really could use some info right about now

AgentChris said:
PD, Mm and ND.
Click to expand...
I wouldn't have thought of Mm as higher up than SSM.
F

Lingo Specialist said:
This is a result of a cycle of resource re-alignment against priority growth areas within blahblahblah
Click to expand...
That is some top tier jargon jiujitsu.

Layoffs always suck. Best of luck to those affected. At least they get severance packages.
T

Gestault said:
I assume he's talking about PS3, PS4 and Vita.
Click to expand...
His point was that Sony isn't supporting Vita, and PS3 anymore.
J

Hope those who were affected get back on their feet soon.

I hope they didn't cancel the Space IP. I'm not really into GoW so something fresh from them would be nice.
M

This Is a bs story. Need some actual numbers and project canceled if Any. Is this big or small time stuff? Really way too little info
F

So they are growing and building a new building as of Feb 1, but laying people off at the same time?
Got to be one of those trying to be "lean" business tactics...or they are saying eff it after seeing how much it would cost them.
F

Today seems to be the day for that stuff: we just lost 5 people today thanks to restructuring. Not a good day...

I hope the SSM people affected by this will land on their feet.
S

RoboPlato said:
This actually would make sense. Maybe the ones left couldn't hold the project together. It would be absolutely massive news if Stig or Barlog's games were cancelled.
Click to expand...
That would make sense to me but what project would they have been working on that got cancelled then?
B

The perfect Dark said:
Wow, it seems the best way to not get fired is working for Nintendo.
Click to expand...
I would knock on wood before saying that.
H

SniperHunter said:
Stig's game? It was in development for a long time and no one even teased it or anything....
Click to expand...
Surely that makes it less likely that it was his game.

I thought SSM have been on a hiring spree as of late? This is really unexpected.
V

infiniteheteroskdasticity said:
This is probably Todd Papy's team (Ascension). He left a while back.
Click to expand...
That makes sense. The key GoW people moved with Stig, and Barlog is building his dream GoW team to take the series in a new direction.

MyLifeIsALie said:
This Is a bs story. Need some actual numbers and project canceled if Any. Is this big or small time stuff? Really way too little info
Click to expand...
What makes you think that kind of information would be revealed?
P

I sucked six dicks to get this tag.

Neuromancer said:
I like him but at the same time I've never forgiven him for Studio Liverpool. =(
Click to expand...
http://www.ign.com/articles/2013/12/05/firesprite-sonys-studio-liverpool-lives-again
P

Evolution had better hope Drive Club is a runaway sales success because I'm getting exceedingly confused how they've avoided all the downsizing with once stalwarts like Studio Liverpool disappearing entirely and now the behemoth of SSM getting a hit. Oh and The Last Guardian continuing development of course.

I don't actually understand it at all since SSM are up there with ND, and this was probably a new IP thats been scuppered. Was it one of their joint productions like The Unfinished Swan follow up?
R

Seems like the AAA bubble popped and everyone is adjusting to the new reality of less bloated productions.

Ouch.
Bad times at Sony.
I feel bad for those folks that are out of work.
F

Ok, so they post this on the blog last month about moving into a new facility. 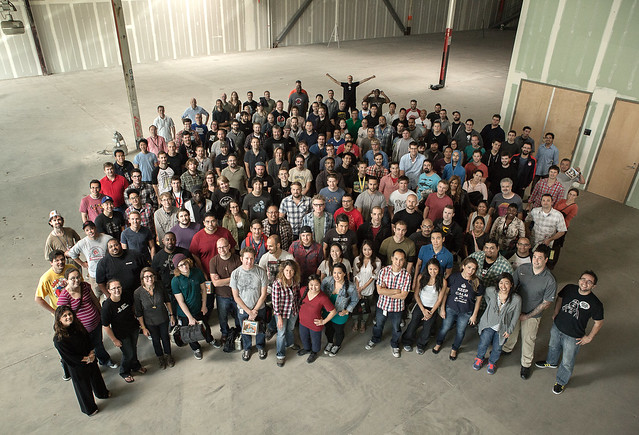 Now 14 years later with 47 games published at this studio here in Santa Monica, it definitely feels like we made the right decision. As we continue our expansion, were preparing to say goodbye to this long-time home, and move into a new cutting-edge facility that will meet the needs of our growing team for the next era of Santa Monica Studio.
Click to expand...
And to lay people off, she forgot to add.
N

Did Barlog ever confirm working on a new GoW or is that just speculation?
T

Sn4ke_911 said:
What? He made Sony Santa Monica's best game to date, God of War 2.
Click to expand...
Yeah, because one guy made the whole game. And he didn't have an existing template to go off of either.

Anyways, I'd rather this be about Barlog's project than Stig's, just for the fact that it's been hinted at for years, while Barlog only recently joined back with SSM.
B

Sendou said:
What makes you think that kind of information would be revealed?
Click to expand...
Approximate numbers are often revealed. That's even how we know the sizes of some development teams because they talk about percentages and such.
F

Oh man, so confirmed. Best of luck to all devs out there.
S

IMO they should downsize the studios that made Knack, Killzone or Beyond Two Souls

It was probably a Vita game :/