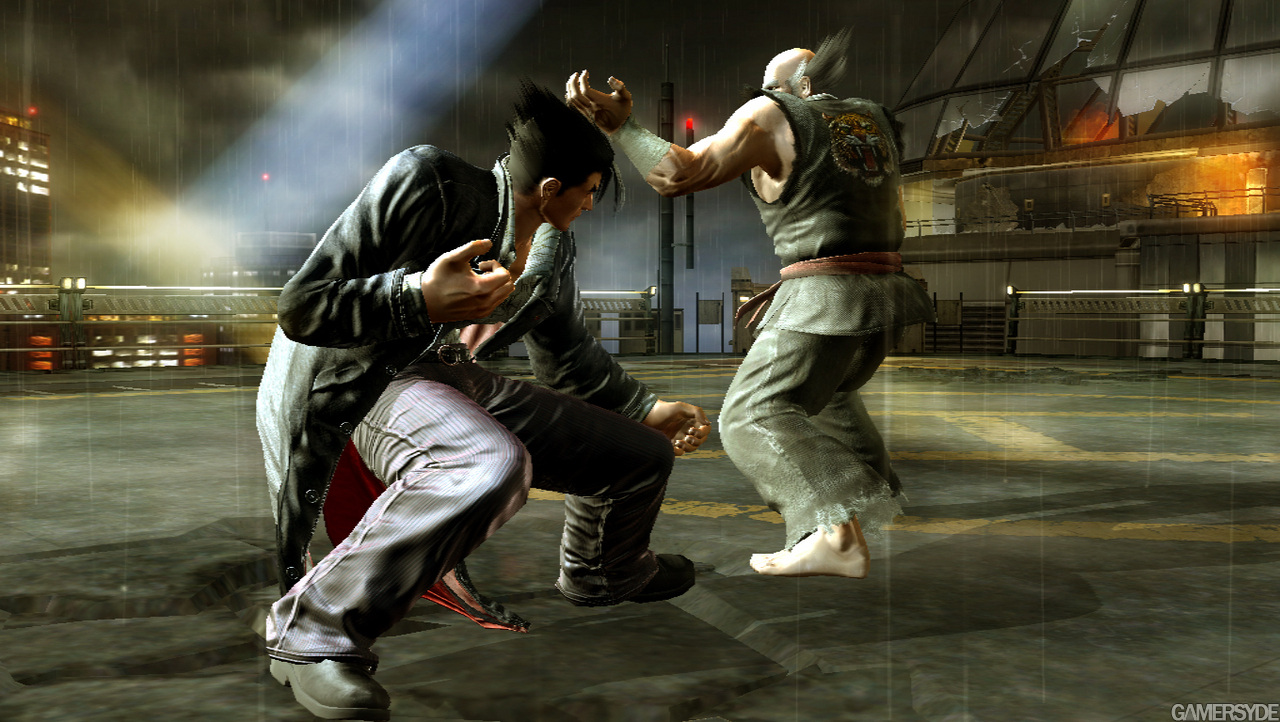 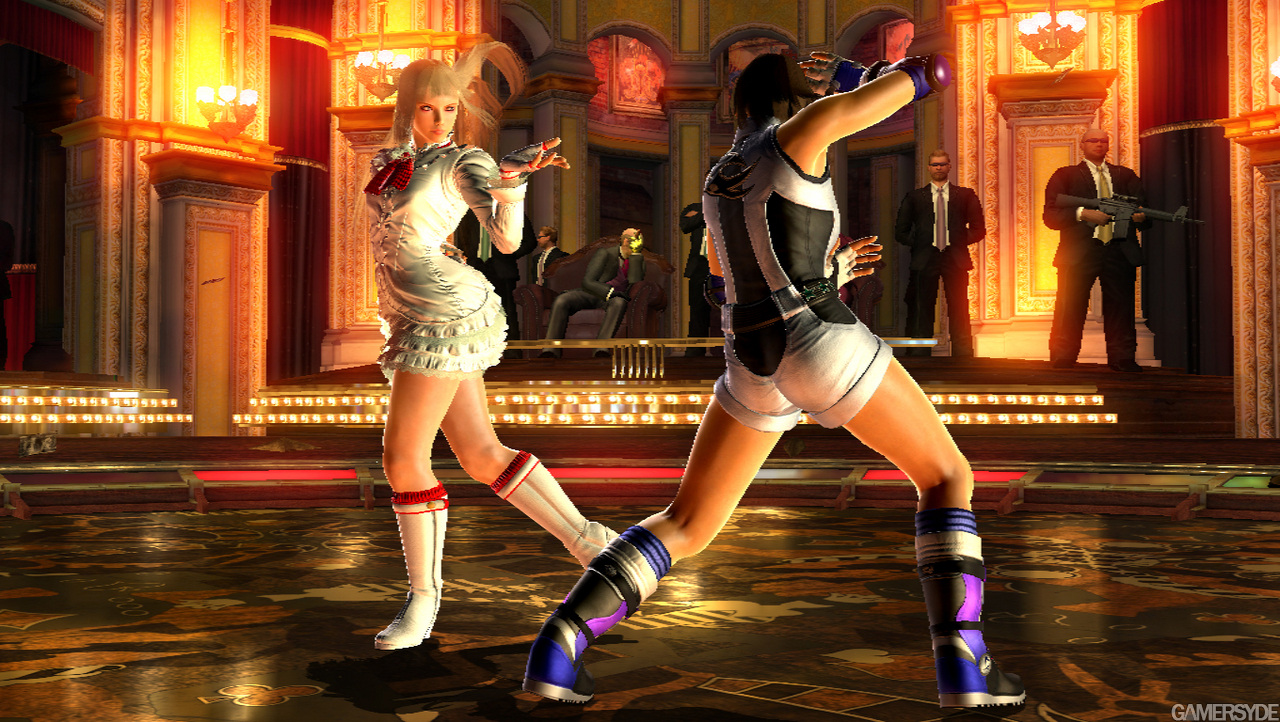 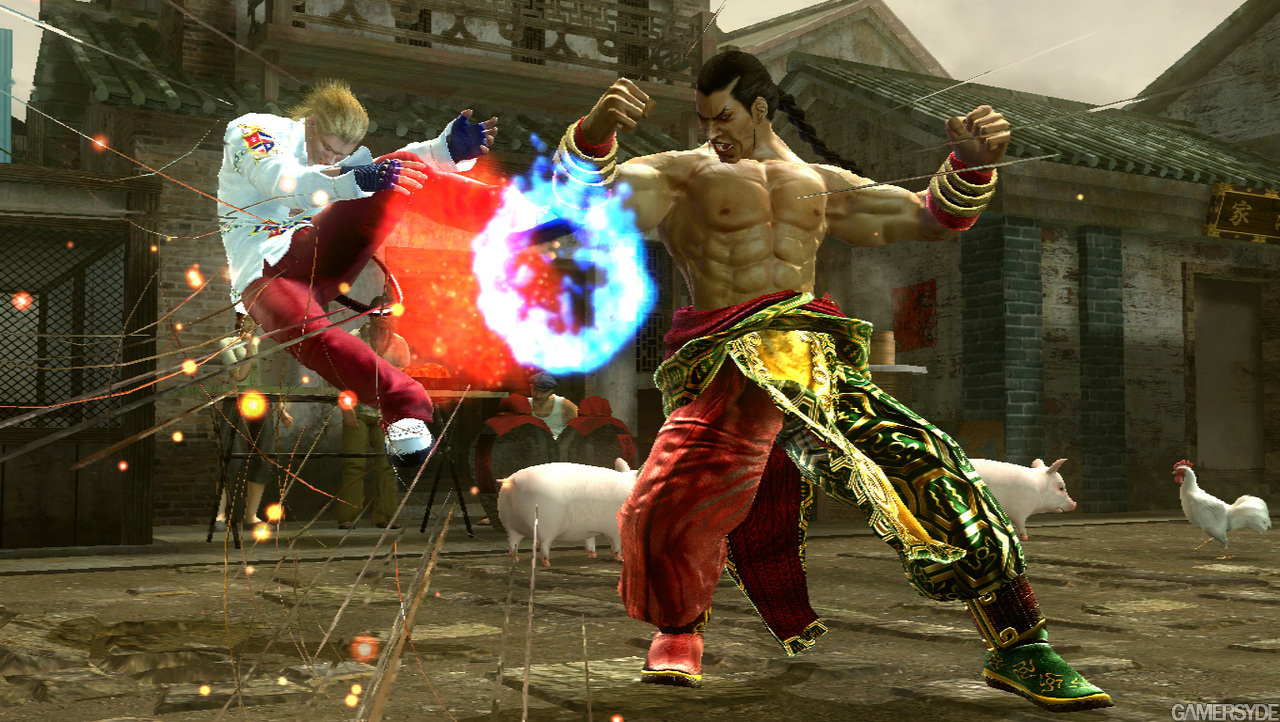 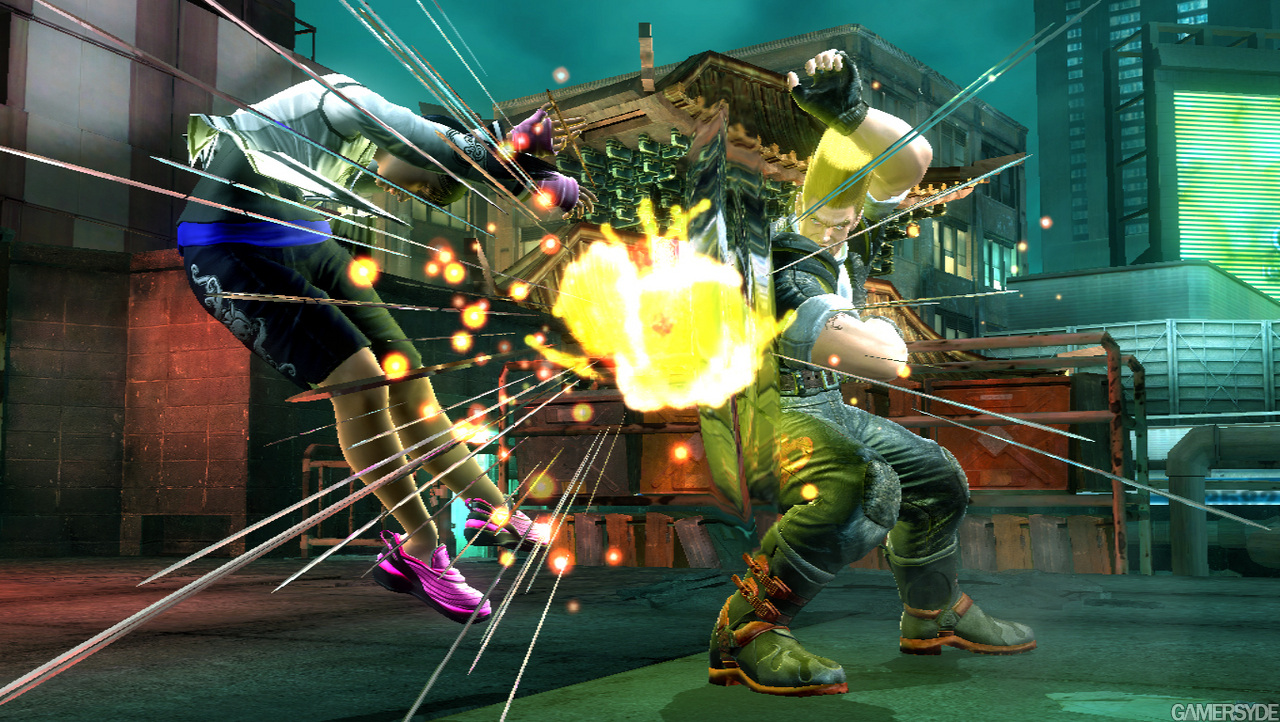 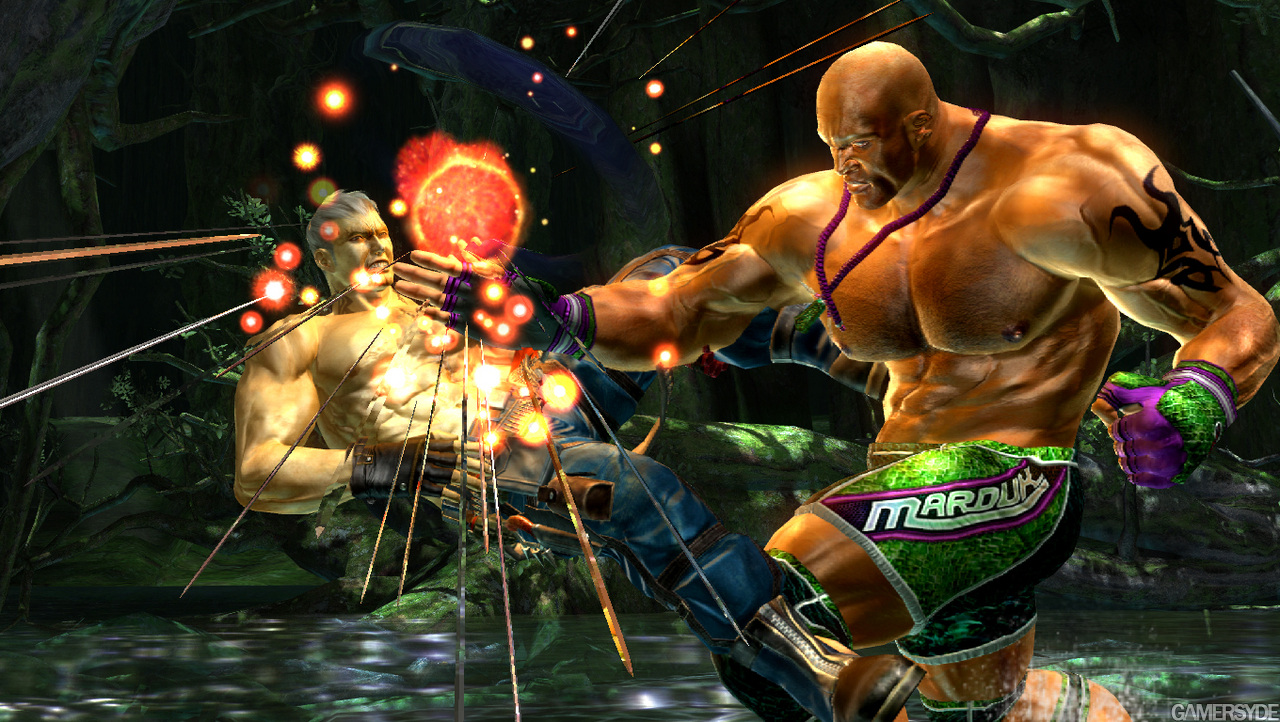 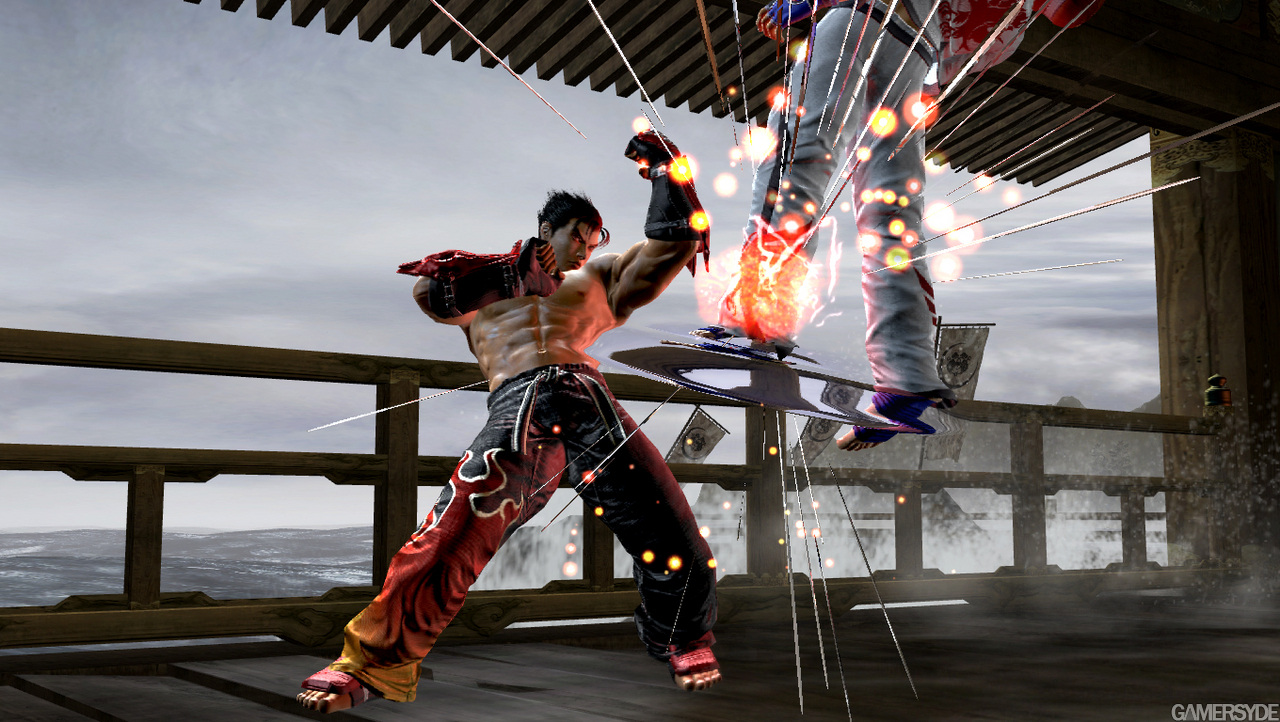 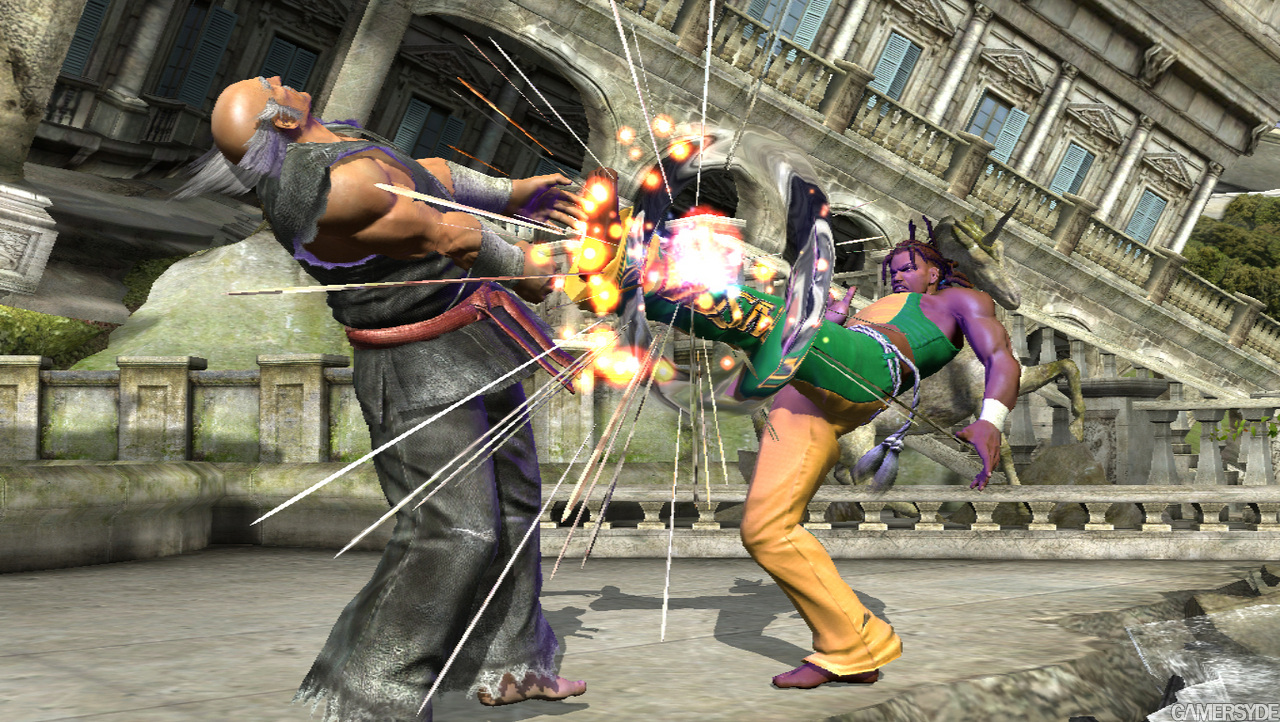 Also a bit of info for Europe, and an update on the release date:

LONDON, UK  2 December 2008  NAMCO BANDAI Games Europe gets working on its combos in preparation for the next instalment in the ultimate fighting franchise TEKKEN 6, scheduled for release in Europe through its distribution partnership with Infogrames Entertainment in autumn 2009 for the Xbox 360® video game and entertainment system from Microsoft and PLAYSTATION®3 computer entertainment system.

Developed by NAMCO BANDAI Games Inc., TEKKEN 6 brings the blockbuster fighting series onto multiple platforms for the first time in the history of the TEKKEN franchise. TEKKEN sets the standard for fighting games with its stunning realism and uncompromising quality, and TEKKEN 6 promises to propel the series to greater heights with major gameplay enhancements and the largest character roster ever seen in the TEKKEN series.

TEKKEN 6 sees the return of many familiar faces while also introducing a host of new characters resulting in the largest line-up the series has ever seen. Each fighter is equipped with their own deadly techniques, moves and attack combinations to make TEKKEN 6 the most challenging King of the Iron Fist Tournament yet. A character customization feature will further intensify the fighting action and multiplayer gameplay modes let players take their fighters online to compete for world domination.

Boasting an illustrious 14 year legacy, TEKKEN is among the most popular and well-known gaming brands in the world with the entire franchise selling more than 33 million units to date. TEKKEN 6 is a must-have for any fan of console arcade fighting.

For more information on TEKKEN 6 visit http://Tekken.Namco.com or http://www.namcobandaigames.eu/ and for Ataris entire product line-up visit www.atari.com.
Click to expand...

Whats with all the lines?
S

why so ugly?
B

In an effort to regain a foothold on next gen, Namco... emulates early PS2 game (RRV) aliasing issues?
A

Damn this game looks bad. How can something slated for next year look worse than whats already out? :lol And I'm a Tekken fan. I've always felt that fighters should look great cus of the limited arenas/character count.
G

SnakeXs said:
In an effort to regain a foothold on next gen, Namco... emulates early PS2 game (RRV) aliasing issues?
Click to expand...

It's nice to recall an era when Japanese publishers actually did cool stuff.

('cept for you Capcom. You're alright.)
N

Damn. Look at that ass. Damn so sharp, my eyes are bleeding.

Looks like one of those games that wont really make sense until you see it in motion.

Now I have to consider using the 360 dpad for this or just playing Tekken 5 again...
A

Wait, what year is it again?
T

Those sparks look like artifacts. It also really needs some AA.
R

How could one fighting game from a company look so good and another so ugly?? They should really consider using centralized tech..
S

Every fighting game should have AA. Its a small area, whats the problem?

EDIT: The detail is nice and I'm sure it looks good in-game but I think I would have preferred touched up shots.
D

Won't be judging too much, but damn those screens are ugly as fuck.
T

Cue bitching about Namco keeping the arcade release out of the US and forcing me to wait an extra year...

At least it won't get swallowed by SFIV though, I'm glad they didn't think they could compete with the game we've all been waiting years (and generations) for...
R

MvmntInGrn said:
Every fighting game should have AA. Its a small area, whats the problem?
Click to expand...

twinturbo2 said:
Cue bitching about Namco keeping the arcade release out of the US and forcing me to wait an extra year...
Click to expand...

Why did they hold off on the arcade release here?
M

Seeing this makes me want Virtua Fighter 5R on consoles even more.

I just DO NOT UNDERSTAND!

How come fighting games have not advanced at all this generation in terms of graphics? i mean they SHOULD be the best looking games out there considering how small the levels are and the fact that there is generally only 2 characters...surely they could push the consoles harder than this.

i mean take racing games for example, they are somewhat similar in their restriction on gameplay and thus can spend time really making what they have look the best they can.

I just think developers have been VERY lazy this generation when it comes to the fighting genre.
M

The images are in 1360x768 resolution, not 16:9. If I remember it correctly from the Virtua Tennis 3 days, that's the Arcade version resolution.

RiZ III said:
How could one fighting game from a company look so good and another so ugly?? They should really consider using centralized tech..
Click to expand...

I don't really care about the jaggies, but the same happened with Soul Calibur IV.

While it is a really good looking game it doesn't come close to a next gen game :| It's not awesome! It's just...good!

Oldschoolgamer said:
Why did they hold off on the arcade release here?
Click to expand...

Too expensive, I think.

If anyone has seen this game in motion, they'll know screens do NOT do this game justice.

i think the stealth background face-palm guy in pic no.2 says it all really

backgrounds look like dr quality, frontgrounds better but not great
B

Damn, this has to be one of the worst aliasing this gen. Yuk.
H

This game is the best looking fighter that is out there, no doubt. These shots look old as hell though, I thought they already released them.
O

The jaggies are hurting my eyes! Did they just through in more polygons and called it a day?
L

MarkMan said:
If anyone has seen this game in motion, they'll know screens do NOT do this game justice.

I played it a bit over the break when I went to visit family in California. It looks great
A

This is the real question here, wtf

autumn '09? That's basically 2010. From the looks of it, this game isn't what I expected it to be after all those years of silence.

Other than that.. THOSE FUCKING JAGGED PIXELS ARE BURNING MY EYES!
R

Perhaps, but it still looks way better than Tekken. The SC games have always looked better than SC. Might be cause it is a lot easier to pull off the art style SC games go for, less realistic, but still, SC4 had really awesome facial modeling.
D

Wow. That's jaggy. If the lack of AA is to focus on framerate, this game better move like two people fighting right in front of me.

It kills me that there are so many games that could be close to a lot of CGi stuff out there if the aliasing didn't destroy the illusion.
G

I don't understand how a fighting game with 2 characters on screen doesn't look better than action/adventure/fps games>Uncharted, MGS4, KZ2, RE5, Yakuza 3 etc.
C

These screenshots can't be right... They just look to awful
R

How many of those run at 60? If fighting games could get away running at 30, they would look a ton better.
You must log in or register to reply here.

eastcoastkody replied
May 11, 2021
Katsuhiro Harada/Bandai Namco Is Making Its Most Expensive Game To Date