In the world of S.T.A.L.K.E.R. 2, each fridge will tell its own story. Documentation leaked

In the world of STALKER 2, each fridge will tell its own story. Documentation leaked

Two files allegedly containing partial technical documentation of the game STALKER 2: Heart of Chornobyl have hit the network. They
thegamespoof.com

Two files allegedly containing partial technical documentation of the game STALKER 2: Heart of Chornobyl have hit the network. They show that the developers want every item in the game – even an old fridge – to tell a story.​

“No matter who”, published more behind-the-scenes leaks on his profile – this time in the form of two several-page text documents. They allegedly contain partial technical documentation for STALKER 2: Heart of Chornobyl . They are written in Russian and are to come from the period when the game was still developed on the Unreal Engine 4 technology – in August last year, the developers announced that they had switched to Unreal Engine 5 .

What has leaked out?​

The first document is entitled “How to run a project” and consists of 12 pages (A4 size).

The artistic side of STALKER 2​

I will discuss the second document in more detail below as it is probably more interesting to most players. It begins with the following text:

The task of the environment is to tell the player a story. In fact, a single scenery object is only a small part of the larger picture.

A person is used to looking at everything at once, perceiving a bigger picture, not realizing that everything around is made up of small stories of insignificant objects. Understanding this is what ultimately makes the environment meaningful and attractive. No object exists outside of the world around it; it always fulfills a role (…).
Click to expand... 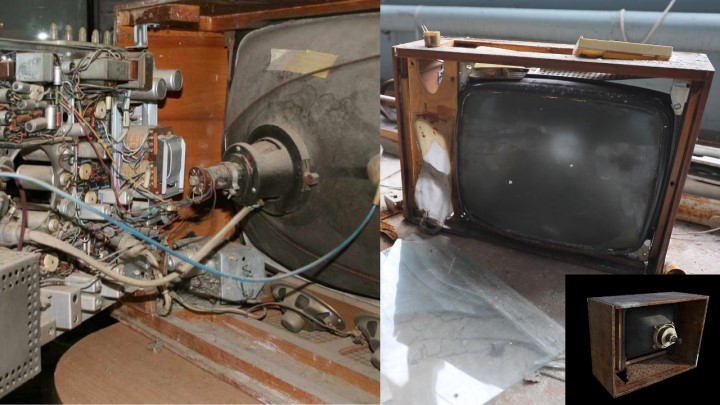 A story told by the environment​

It seems that the creators of Heart of Chornobyl attach importance to even the smallest elements of the environment .

Almost every room, forest or wetland tells a story that we will learn through an in-depth look at objects in a given scenery. The creators even go a step further and when creating the elements of the environment, they ask themselves:

What did the object go through before it was included in our “frame”? What is its path and by whom was it used? Example: an ordinary “Dnieper” refrigerator, manufactured in 1957.
Before the tragedy in 1986 [talk of the Chernobyl disaster – note ed.] it was somehow used by the people who bought it (one person, family, state organization?). Therefore, apart from rust, it will have traces typical of households (…).
The dents – not random, but where they should be – make objects look more realistic. For example, damage to the door of the aforementioned refrigerator may be the result of its repeated careless opening (…).
Click to expand...

Each object is part of something bigger​

Another example featured in the document is an old stove:

Before the stove was abandoned, it was used by someone (most likely by the inhabitants of an ordinary household).
Click to expand...

It had been torn from the place where it stood. You might think that the looters did this to temporarily hide their belongings in it. (…) The logic behind creating such an object is as follows: damage caused by domestic use> leaving it alone for many years [by evacuating people from the vicinity of Chernobyl – add. ed.]> dents as a result of displacement or other actions of the looters> left to fend for themselves again (…).
Click to expand... 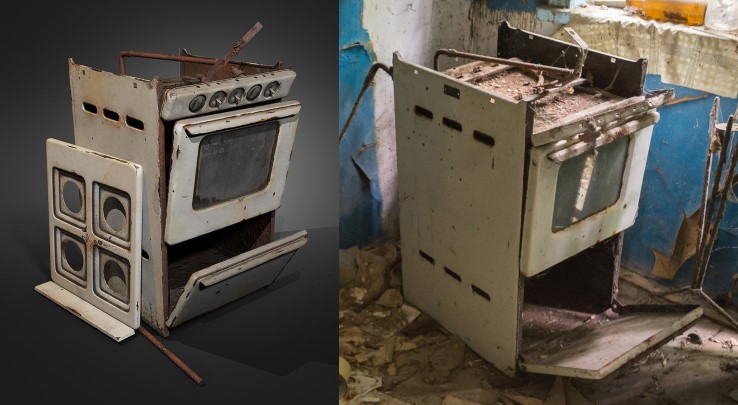 The work of the hands​

In many cases, the creators try to avoid the procedural techniques of generating objects and focus on those created almost 100% by hand :

Crafts are very important. The fact is that the procedural nature of a model often reveals its artificial origin through excessive homogeneity or repeatability.
On the other hand, the artist’s task is to create a convincing object – which would also work in the real world – and not one perceived by the player as a kind of “prop”, intended to fill the empty space on a given level.
It shouldn’t have happened. That is why we try to make each resource as unique as possible and we use procedural maps wisely. If we make rust, we wonder how it will be located, where will it be darker and where it will be brighter (…).
So if you get any graphic artifacts somewhere after applying the procedural mask, try changing the overlay type from UV to Triplanar first. (…)
This kind of sloppy shocks the player out of the general atmosphere, especially when hitting the visible sides of objects (…).
Click to expand...

Facts beyond your imagination​

In creating objects, the creators do not rely only on their own imaginations. They also search for information and curiosities about the appearance and operation of the object they create , so that it resembles its counterpart in real life.

It is not an easy task – after all, we are talking about items that, in most cases, have not been produced for decades. Finding their documentation is sometimes almost a miracle.

The rest of the document​

In the further section of the document – as well as in the file “How to run a project” – there are strictly technical information: naming of individual elements, such as model meshes or textures, or guidelines regarding, for example, Texel density. Those interested can read them at this link. 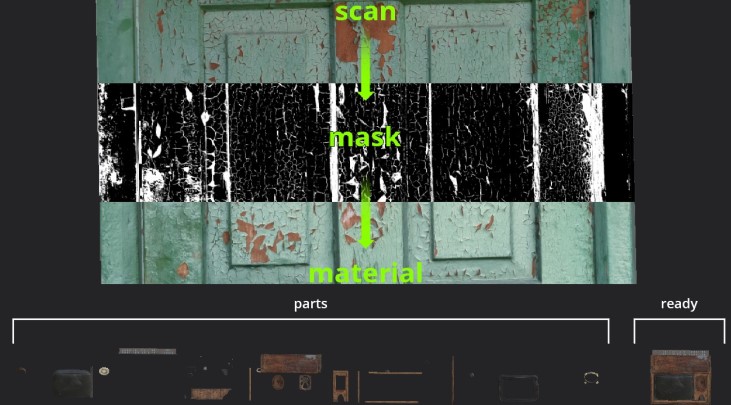 Hopefully the developers and their loved ones are OK.
N

This is all pretty standard stuff for environment artists, there's nothing unique.

It's called visual storytelling and without it, modern games wouldn't get pushed back three times before release because of a pedantic developer who spent 300 hrs on a fridge magnet.
Last edited: Apr 26, 2022
P

I just hope this comes out soon

adamsapple said:
Hopefully the developers and their loved ones are OK.
Click to expand...

The devs have or are in process of relocating to Czech Republic. 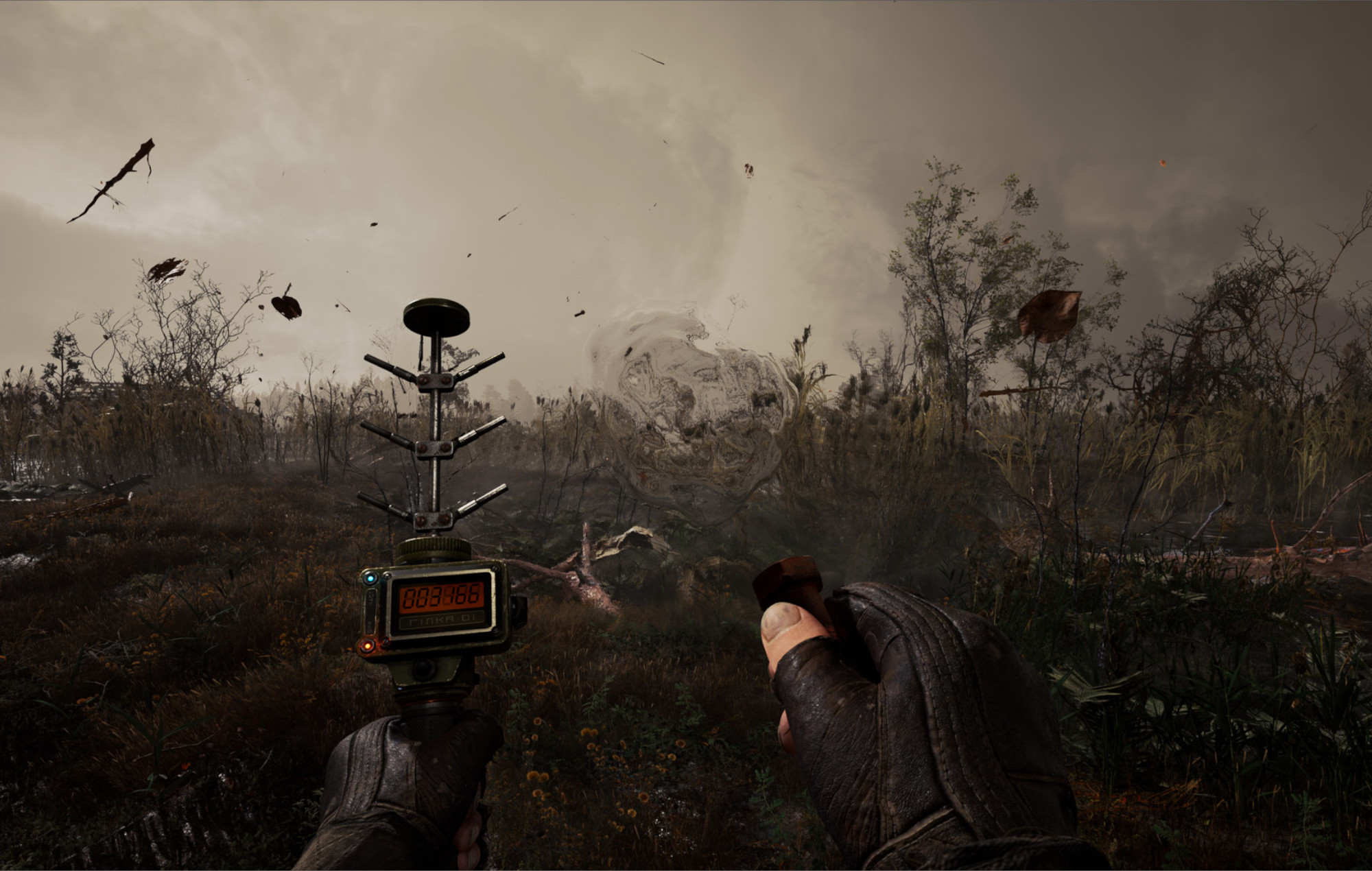 The studio may be in the process of moving to the Czech Republic.

eh, the first STALKER had a metric ton of cut content/ideas, like the more you use a specific gun, the more proficient you'd become at using it.

the old fart in me says stuff like this will get cut or only barely implemented.

It's funny to me that proper level-design and prop-design is now a news-story.

The bigger news-story will be how much of this content gets cut from the final game.

The even-bigger news-story will be about how many people love the game, despite it being a shell of its intended-self.

Soo deep, wow. Can you imagine? Analyzing that kind the world and the stories it will tell?

I feel more confused than Jayden Smith right now... and right after he found out his mother was tapping his friend.
You must log in or register to reply here.

Spukc replied
Yesterday at 7:56 PM
Do you view Level Design in Level-Based games in the same lens as Open-World games and if yes/no how do you differentiate between them?
Opinion Cringe Analysis