Inhumanoid: The Only Remake We Truly Need

Lovecraftian monsters are all the rage right now. dark fantasy is all the rage. dragons are as popular as ever. 80s properties are getting made left and right. now's the time to revive Inhumanoids! 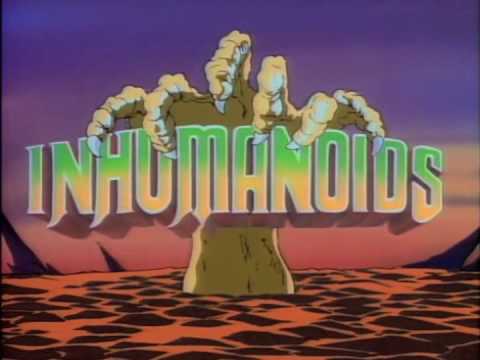 is the title of an animated series and the name of a Hasbro toy property that were both released in 1986. In the tradition of other Hasbro properties such as Transformers, and G.I. Joe, the show was produced by Sunbow Entertainment and Marvel Productions and animated in Japan by Toei Animation. Inhumanoids tells the story of the scientist-hero group, Earth Corps, as they battle a trio of subterranean monsters called the Inhumanoids with the aid of elemental beings, the Mutores.

the heroes are a team of scientists who tunnel to the core of the Earth, towards and underworld that is teaming with all kinds of monsters, which they battle with crazy machines and vehicles (sold at a toy store near you). there is the Dark Souls-style Skellweb, a living and breathing Dungeons and Dragons world, with awesome character & art design.

there are the titualar Inhumanoids themselves, three ancient monsters who awaken due to the machinations of a wealthy industrial 007-style villain (complete with an eyepatch) and repeatedly attack the surface, as well as the medieval style realm under the Earth. D'Compose has an exposed ribcage that he uses to trap his victims. Tendril is basically a cthulu monster, a large, green, squidlike destroyer of worlds, arising from ancient magic. Metlar is their leader, looking like he came right out of Ghosts N Goblins.

The story begins with the discovery of a monstrous creature encased in an amber monolith buried in Big Sur national park, which is recovered by the government-funded Earth Corps, a geological sciences research team. The finding spurs Blackthorne Shore, a corrupt industrialist, to clandestinely uncover a second monster buried elsewhere—a giant vine-like creature called Tendril, who attacks the amber block's public unveiling in San Francisco to release the macabre colossus trapped within, D'Compose. They rampage through city streets before fleeing into the watery darkness of the bay.

The Earth Corps member code-named Liquidator returns to Big Sur in search of further clues to the origin of these monsters, whereupon he discovers a race of sentient trees, the Redwoods, who explain that they are members of a subterranean population known as Mutores, and that their kind sealed the evil Inhumanoids Tendril and D'Compose beneath the Earth ages ago. The malevolent Inhumanoid leader, Metlar, remains imprisoned below the surface, paralyzed by the magnetic field of a Mutore duo named Magnokor.

A nocturnal assault by Tendril demolishes the Earth Corps base, prompting a chase into the depths of the Earth, but even with the help of another Mutore species, the rock-bodied Granites, they are forced to retreat back to the surface. When their budget is summarily cut by Senator Masterson, a crooked politician in Blackthorne Shore's shady pocket, they are approached by Sandra Shore, Blackthorne's sister, who has learned of her brother's sinister plot to liberate Metlar. Funded by Sandra, the team constructs new vehicles and embarks back below the Earth's surface, tracking D'Compose and Tendril to the city of the Granites, where an ensuing battle frees Metlar from Magnokor's hold. Having pilfered the Earth Corps's engineering schematics via his ties to Masterson, Blackthorne joins the fray, now equipped with his own battle-suit whose magnetic powers he wields against Metlar, only to be derailed by Tendril's interference while Sandra falls victim to the mutative touch of D'Compose.

Earth Corps manages to escape and forms an alliance with the Granites. Herc accompanies them to D'Compose's domain of Skellweb while Auger and Liquidator venture into Metlar's kingdom of Infernac, and Bright convinces the Redwoods to help defend the surface world against attempts by the Inhumanoids to acquire sources of power. Herc and the Granites are able to defeat D'Compose's reanimated soldiers and restore Sandra to normal. Blackthorne pursues Auger and Liquidator to Infernac and tries to use his magnetic powers on Metlar once again but is foiled by Magnokor and taken captive by Metlar.

Acting on information forced from Blackthorne, the Inhumanoids raid a Soviet air base, stealing a handful of nuclear missiles. A seemingly repentant Blackthorne warns Earth Corps that the missiles are intended to shatter the divide between the Earth's crust and mantle, but upon travelling into the Earth to preclude this catastrophe, the team discovers that Blackthorne has set them up and that the missiles are actually meant to detonate the planet's core. Earth Corps is able to convince D'Compose to allow them access to Infernac — a deal made easier by the fact that the Inhumanoid already fears for his own survival in the face of Metlar's insane plan — and they manage to defuse enough of the missiles to thwart the explosive scheme.

Following a climactic battle, D'Compose is re-sealed in amber casing and Tendril is imprisoned by the Granites. Finally, Magnokor succeeds in neutralizing Metlar even as Blackthorne is arrested by Earth Corps. Senator Masterson provides the Earth Corps team with a new headquarters facility, but a tissue sample secured from Tendril during their first encounter with the monster has mysteriously gone missing.
Click to expand...

what is more, Inhumanoids is largely from the brain of Flint Dille, a George Lucas-ian figure, a sort of sci fi enthusiast who was friends with the original Dungeons & Dragons people, and went on to do tons of 80s cartoon animation:

After grad school, Dille worked as a freelance script reader, production assistant, and assistant art director before getting his first writing job from Joe Ruby at Ruby-Spears as a Saturday Morning Development writer. This led to writing scripts for Mr. T., The Puppy, and RoboForce. Later, Dille went to work for Sunbow Productionsand served in various capacities as Writer, Story Editor, Associate Producer, and Co-Producer on several shows, including The Transformers, G.I. Joe, Inhumanoidsand Visionaries.

Dille joined the production team of The Transformers as a supervising story editor in the show's second season (1985-1986) and also co-wrote wrote the episode "Prime Target" with his G.I. Joe colleague Buzz Dixon. Dille worked on an extensive rewrite of Ron Friedman's screenplay for Transformers: The Movie (1986); although Friedman contractually received sole screenplay credit, Dille was credited onsceen as the film's story consultant. After the movie, Dille served as a story editor for the third season of The Transformers (1986-1987) and wrote the season's five-part opening story, "Five Faces of Darkness."

Dille returned to G.I. Joe after the series was taken over by DIC Entertainment, co-writing the episode "Injustice and the Cobra Way" for the show's first DIC season (1990-1991).

Dille worked briefly at CBS on the in-house production of Garbage Pail Kids, before working with Amblin Entertainment on several projects, including An American Tail: Fievel Goes West, Tiny Toons (as a movie), and We're Back! A Dinosaur's Story.

if they are going to do a nostalgia remake, let's do this. have the Stranger Things guys do it. or Guillermo Del Toro. or Quentin Tarantino.

Wow, never heard of this before. How could I have missed this?
Reactions: Tesseract

I never got to watch the show itself as a kid but I remember the toys being for sale and they seemed huge at the time.

Finally watched through it during my earliest stoner years when the dvds came out and had fun with it. If you ever watched a Sunbow cartoon from that era then you'll recognize all the voice actors (Especially Chris Latta). 13 ep series so the budget was pretty good for an 80s tv show and the tone and imagery probably scared a good bit of kids. The last few episodes didn't get a dvd release in the US, which was lame as those had a couple of the more extreme (By 80s kids cartoon standards) episodes. Had to import a UK set for those. US dvd's also fucked up by missing an entire sound channel for the intro, which ruined the opening theme. Most would probably find this cheesy as heck but if you like Sunbow's 80's output or want some nostalgia then you'll prob have fun with it.

I don't know about a reboot or live action movie since Hasbro movies are super garbage and it's very obscure. Maybe if the new Dr. Strange works out some crappy exec might think it's a good idea to attempt their own horror copycat and they'll realize they have this in their ip vault and gamble on it. =P

Also the dvds are going for $100+ now? Jeez I bought them for like $2 each back when nobody wanted them. I should sell them before they get some random new digital release or something.
Last edited: Jul 25, 2019
Reactions: #Phonepunk# and Tesseract

Yeah! Loved watching this as a child.

damn that shit is dope as fuck, pretty sad that i missed this
Last edited: Jul 26, 2019

As a kid, I loved Inhumanoids. I remember getting two of the three monsters for Christmas the year they debuted on tv (Metlar and Decompose).

Metlar showing how much he loves America.
Reactions: #Phonepunk#
You must log in or register to reply here.