Last month, Intel's CEO stated that the industry should stop focusing at benchmarks but recent material presented in its 'Partner Connect' program reveals that the blue giant still heavily relies on CPU benchmarks over its own and competing products from AMD. Marked by controversy, Intel has once again presented its new 'Real World Performance' & 'Real World Usage' benchmarks which compare the Intel Core CPUs vs AMD Ryzen CPUs on both desktop and notebook platforms.

The slides were gathered by AdoredTV (Via Videocardz), and essentially show what Intel is internally presenting to its partners rather than end-users. The 'Intel Partner Connect' slides are intended for partners only so that they can use the material for their own presentations for the said products. It is useful in most cases with the shared specifications and differences providing partners an insight into what new to expect from Intel's latest products however, the controversial part begins with the market positioning and product benchmarks that Intel uses in its presentation.

We can see Intel comparing its Comet Lake Core i7-10750H CPU based laptop against an AMD Ryzen 9 4900HS laptop. The Intel laptop is shown consistently ahead of the Ryzen 9 laptop in a wide variety of gaming titles with up to 23% better performance. The Intel laptop comes with a lower price point of $1299 US versus $1449 US of the AMD Ryzen based laptop. It seems like everything is great but not until you dive deeper in the specs. Both laptops used for comparison in the tests feature a different tier RTX 2060 GPU, the one on the Intel powered MSI GL65 is the full 90 Watt variant while the one used in the ASUS ROG Zephyrus G14 is a 65W variant with lower clocks.

More on the source: 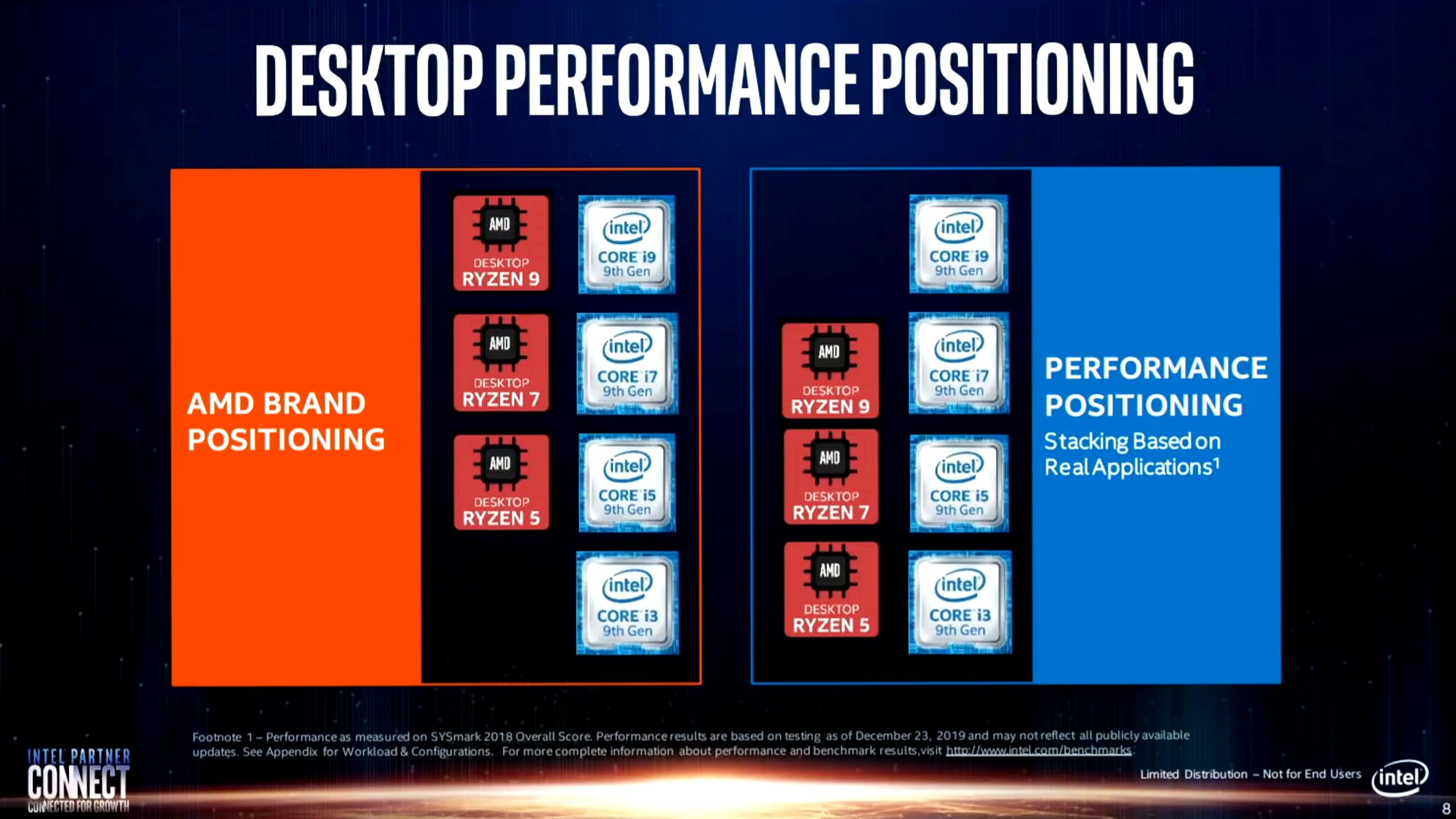 Intel is going for, yet again, shit tier marketing. I have that exact AMD laptop and a AMD desktop machine now, no more Intel for me when AMD is so good.
Reactions: SantaC

AMD is for those with a tight budget.

I’d pay a premium price for an Intel/Nvidia console - the performance boost would be well worth it.
Reactions: marquimvfs, GHG, Panajev2001a and 6 others

That used to be true, but with 3000 series AMD stepped up their game, and now the CPUs from both companies are more or less on par no matter what you throw at them, at least as far as desktop market goes.

ToadMan said:
AMD is for those with a tight budget.

I’d pay a premium price for an Intel/Nvidia console - the performance boost would be well worth it.
Click to expand...

It’s also the thermals. Look at people making a huge deal about the PS5. For a console the design has to meet many different goals beyond performance.

Is anyone surprised at this point? Intel have been like a fish outta water for the past few years
Reactions: marquimvfs

You must have missed the memo, AMD now has the general performance grown on both desktop and laptops.
Reactions: marquimvfs and GHG

I'm really curious to see what Intel's next-big cpu arch looks like. Will they actually recover? It's going to be interesting. Just wish Optane progress didn't stall as well.

Using a 12nm process only goes that far, you can't keep throwing power, fancy turbo modes and binning at the CPU forever. AMD will have the lead for at least another year, Intel seems to be still restricted to maximum 10c/20t for their desktop and laptop CPUs.

ToadMan said:
AMD is for those with a tight budget.

I’d pay a premium price for an Intel/Nvidia console - the performance boost would be well worth it.
Click to expand...

For what it's worth there is a nVidia based console option, it's called the Nintendo Switch.

It's a troll post, don't waste your time.
Reactions: onunnuno
You must log in or register to reply here.