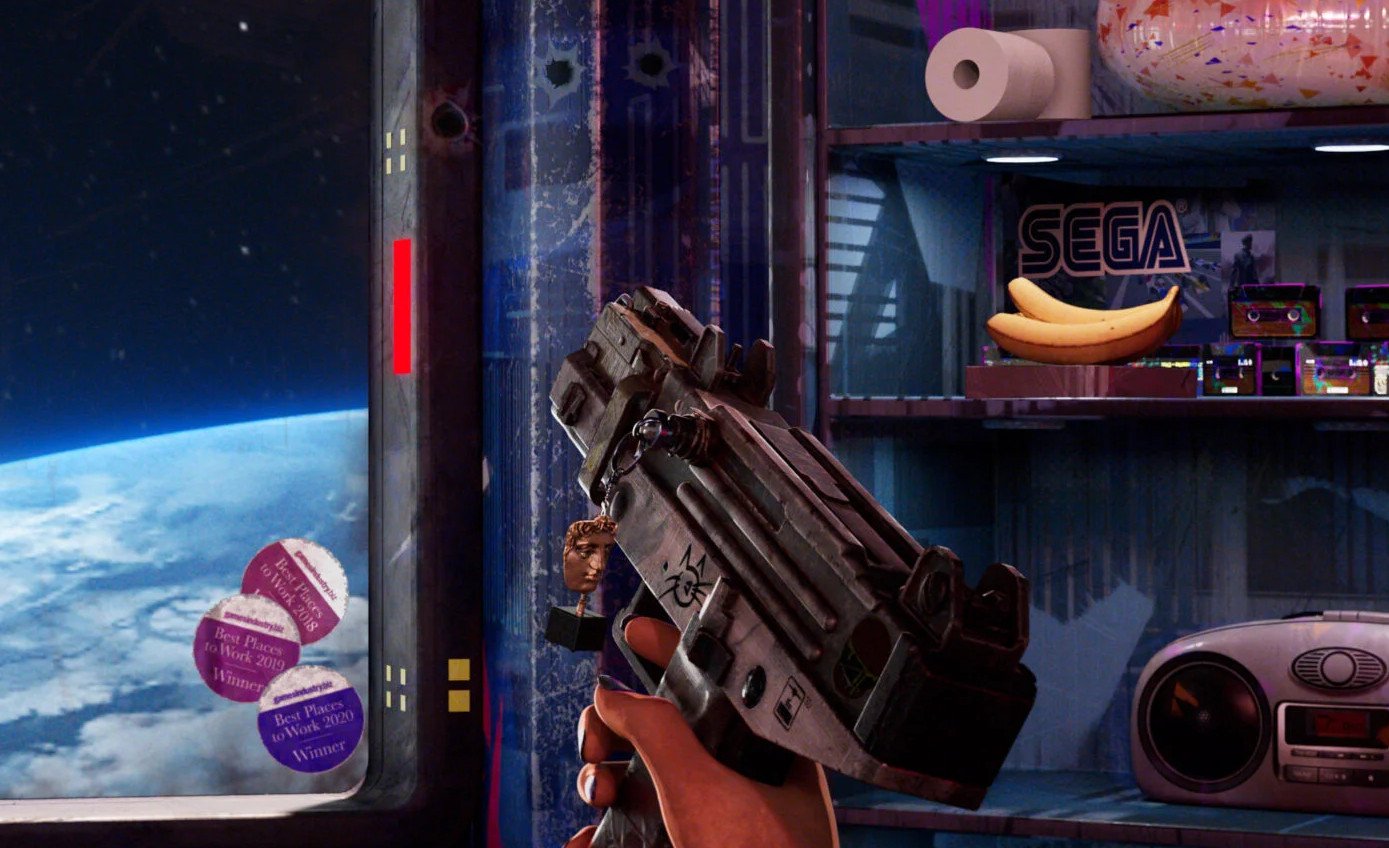 The Total War and Alien Isolation studio has been working on the shooter for several years, but it’s yet to be shown publicly. According to job listings, the game will be “something radically different in the FPS space.”

The new image appears to suggest that one of the unique elements of the shooter will be its many references to other Sega titles.

Sonic can be seen floating in space, while a set of shelves next to the player house a Sega logo, a bunch of bananas (which may be a reference to Super Monkey Ball) and some paint-sprayed cassette tapes (which may refer to Jet Set Radio). There’s also a Virtua Racing screenshot on the wall.

Other potential references are less immediately clear, including some toilet rolls and a giant inflatable unicorn. The former may refer to Yakuza: Like a Dragon, which includes the need to collect toilet tissues, while the latter may refer to ToeJam & Earl, which included a rubber ring power-up. 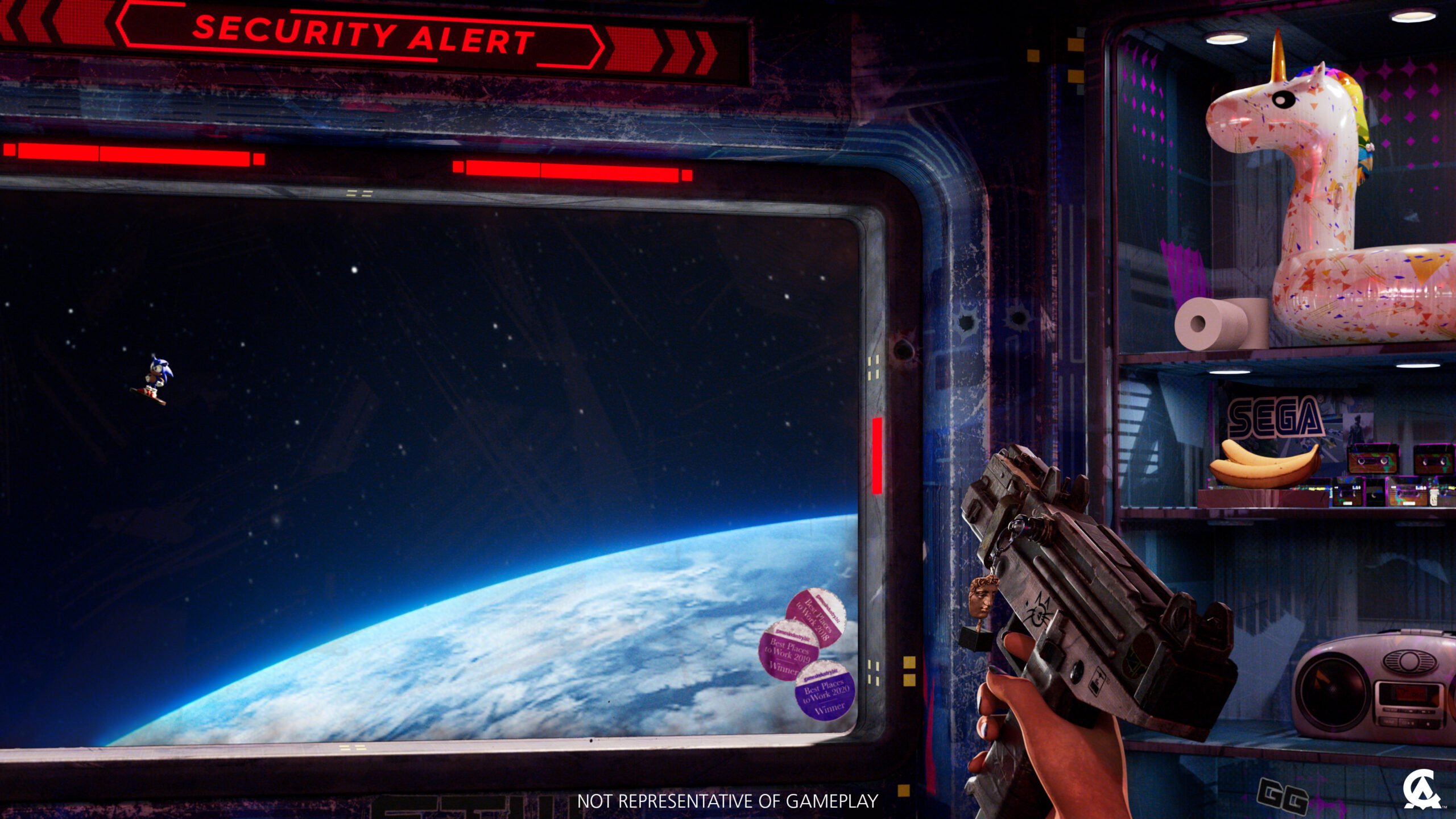 (a woman is holding the gun)
A "waise fwom your gwave" over 9000 level revival would be Zillion.
(unfortunately i think it's a Tatsunoko property)
Last edited: May 26, 2021
Reactions: Lone Wolf and Soodanim
M

Creative Assembly worked with Microsoft to create Halo Wars 2, and now doing another Sega title... Microsoft... Sega.... Yesterday was Tuesday And tomorrow is Thursday so that means today is....

oh my god
Reactions: Area61, makaveli60, MDSLKTR and 5 others

OMG, can you imagine Empire 2 these days lol

I dont think CA would dare

I’d like to see Creative Assembly make a sequel to Alien Isolation and for it to be what Colonial Marines ought to have been
Reactions: SinDelta, makaveli60 and llOswaldll

no doubt Alex Kidd in Billie the Kid's World

I want Spartan Total Warrior and these next gen consoles can give us the best experience for these types of games!

They have multiple teams. One of which is their Historical team. They could very well be working on that as the DLC for Three Kingdoms winds down.

Gniady, who was a producer for the original Destiny’s competitive PVP multiplayer modes, and a gameplay designer for the sequel’s sandbox, announced his move to the UK studio on social media this week.

It’s not clear who else is working on the shooter at CA, but Gniady’s pedigree in the competitive shooter space will surely benefit the development team.

The way its worded it seems if they are developing a multiplayer FPS based on the Alien franchise? Or is this just getting my hopes up too much? Reading too much into it?
Reactions: IbizaPocholo, mansoor1980 and MiguelItUp

The way its worded it seems if they are developing a multiplayer FPS based on the Alien franchise? Or is this just getting my hopes up too much? Reading too much into it?
Click to expand...

Man, I really don't know. I can see this going in several different directions. But BOY do I want it to mean an Alien themed multiplayer title...
Last edited: Oct 6, 2021
Reactions: skit_data

MiguelItUp said:
Man, I really don't know. I can see this going in several different directions. But BOY do I want it to mean and Alien themed multiplayer title...
Click to expand...

I’m probably reading too much into it but whatever this is it sounds promising.
Reactions: MiguelItUp

skit_data said:
I’m probably reading too much into it but whatever this is it sounds promising.
Click to expand...

Agreed. I just want more Alien/Aliens, so pardon me, haha. But I love the idea of THAT team being the one that's at the helm of this new project. Hopefully we hear more about it sooner than later.
Reactions: IbizaPocholo and skit_data
You must log in or register to reply here.