Note: The last image (Twitter) is referencing this NX speculation thread on GAF. It's not even a Nintendo thread, it's NLG and NX.

It's entirely possible that he's straight up trolling but I think the title is accurate. Mods can change it if they disagree.


Skiesofwonder said:
Not sure if this is thread worthy, so I'll post it here:

Kevin Periera (host of Attack of the Show and the recent Nintendo World Championships) tweeted:

For those that don't know, the Gamestop Expo starts this Wednesday.

If you look at his SnapChat (AttackSnap), in one of his story snaps he quickly turns the phone camera away from a television screen, saying "you weren't suppose to see that". He also mentions in another snap that he is rehearsing for something Nintendo-related at the expo.
Click to expand...

Calm Mind said:
what the what?

PKMNTrainer said:
Is this happening? 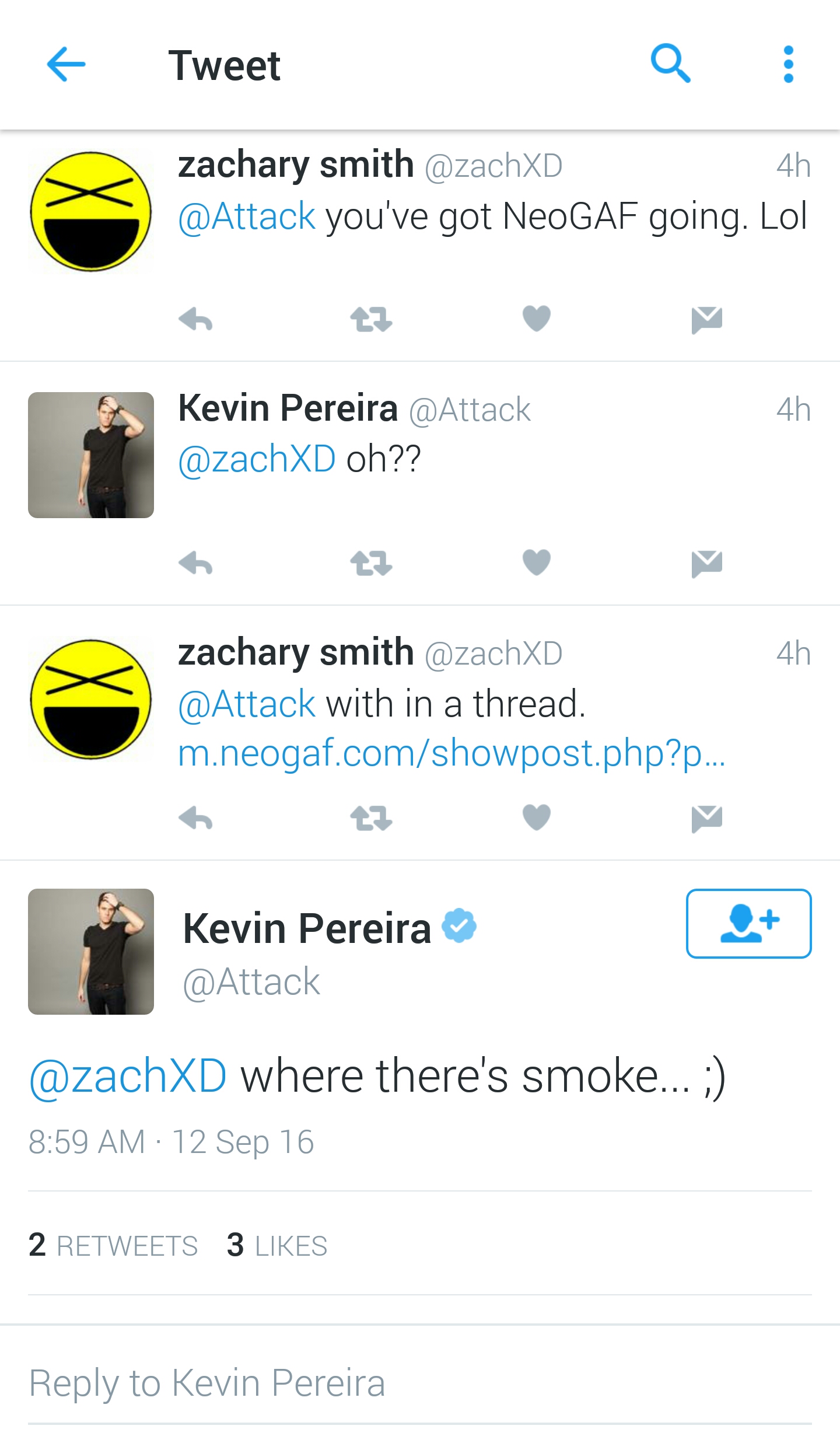 This is how publishers push their fall lineup on gamestop's managers to drive up preorder numbers. Games or systems do not get announced here.


Nintendo probably just hired him to present - they hired him to do the nintendo world championships last year.
N

lol that would be amazing.
G

How you just make this thread with that title..
S

Thanks for editing it.
O

It's just going to be about the upcoming amiibos, The Mini NES, and maybe some new N3DS designs exclusive to GameStop. NX is not happening in September.
D

No way would it be announced here, but who knows
R

Where did you get a hint of NX from again?
B

Dystify said:
He doesn't mention NX at all...?
Click to expand...

The last image from his Twitter directly references an NX thread.
F

This thread will be locked quickly.
F

Would Nintendo let him tease this much if this was really an NX reveal tho?

I sure hope yes they would, but I dont believe it
M

If this was anything big, he'd have been ninja'd to death by now.

Here are some great 3DS games you can expect to buy this year and early next!
D

No he didn't
Y

No, possibly something amiibo related.
K

OmegaSmash said:
It's just going to be about the upcoming amiibos, The Mini NES, and maybe some new N3DS designs exclusive to GameStop. NX is not happening in September.
Click to expand...

No way Nintendo would show the NX there.
J

woah so its a big conference room, what the heck else is Nintendo gonna show in a big conf room.

I am so moist right now
V

this is what NX speculation does to people

The title shouldn't have had NX in it. Not only he could be trolling with some of his tweets, but there's nothing at all indicating "NX" anywhere. Just that it's Nintendo-related for sure. Nothing else.
H

kind of jumping the gun aren't we?

The post he was linked to doesn't actually mention the NX.

Nintendo wouldn't just drop an NX reveal with absolutely no warning at a GameStop expo.

Making a whole new thread is a bit much honestly...
U

They wouldn't let him do this, though.
J

It wouldn't be the most ridiculous thing they've done.
N

Makes sense, retail need to know about it to start buying in stock etc

OP looks there! Can you see the rose flying elephant?
B

The NX is a G4 reboot, praise be
A

What a fitting place to reveal the device.
F

Don't do this to yourselves.

I can almost feel the rage when it's just a 40 minute presentation of new Mario Party minigames and Color Splash food animations and shit before the gamestop employees get their hands-on with the fall line-up.

I mean, who fucking knows at this point