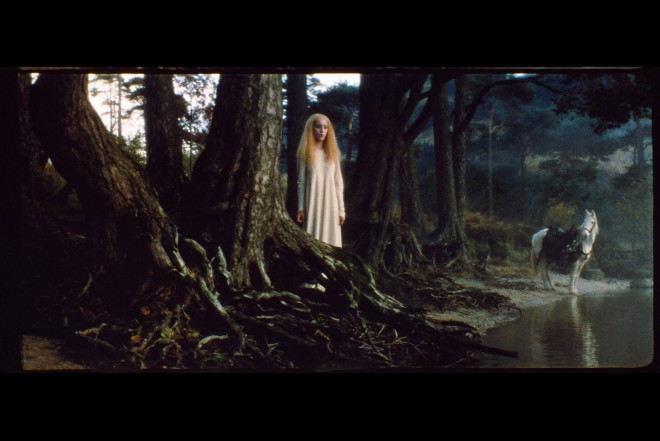 Christian is still debating how to share Black Angel with fans. &#8220;Probably the best way is a downloadable version,&#8221; he says. &#8220;I think it would be great to see it in a cinema again on a program with Empire Strikes Back. That&#8217;s how it was intended to be seen.&#8221; I suppose we can sit through Empire one more time, if we must.

More at link
Click to expand...
Always good news when a lost film is recovered.


And yeah, it's the directorial debut of the man who brought us Battlefield Earth.
D

Huh, that's cool, especially for those involved. I wonder if it's any good.
X

I suppose we can sit through Empire one more time, if we must.
Click to expand...
Don't make it sound like a chore, Wired, jesus.
W

Always great news when a lost film is found.
T

Lionel Mandrake said:
And yeah, it's the directorial debut of the man who brought us Battlefield Earth.
Click to expand...
HAIL XENU
C

What can Tarantino pull from this for a future project?
B

Kinda weird to think that anything made after 1970 could really get "lost". I thought at some point studios got much better about storing and maintaining their archives.

Aren't the original prints of Star Wars IV-VI supposedly "lost"?? Or is that just the excuse that Lucas gives when asked why he will not re-issue the original versions on DVD and BluRay?
I

I'm interested when the public will be able to see this.

I'm surprised it aired before a movie based on it's length, was this common back then?
G

This was shown before Empire in the theaters?

That was the first movie I remember going to. I wonder if I saw this too.
K

Lionel Mandrake said:
And yeah, it's the directorial debut of the man who brought us Battlefield Earth.
Click to expand...
You mean Academy Award winner Roger Christian?
S

Lionel Mandrake said:
And yeah, it's the directorial debut of the man who brought us Battlefield Earth.
Click to expand...
http://www.youtube.com/watch?v=-CZt_XyE3tg

I didn't go out to a lot of movies until around the time of Return of the Jedi, but I certainly don't remember any 20-minute short films playing before anything I saw.

I imagine it would have pissed off a lot of theatres too, since most movie houses only had 2 or 3 screens back in the day. Adding a long short film to every screening would prevent them from getting in an extra showing every day.
Z

Worth it.
Click to expand...
It's funnier without the commentary.
G

That is really cool. I would love to see it.
H

BigJiantRobut said:
Don't make it sound like a chore, Wired, jesus.
Click to expand...
I think they were being facetious.
T

There's a longer interview from a couple years ago:

Is there any chance that we'll see Black Angel released on DVD?

I had a 35mm copy. Richard Edlund's company, Boss [Films], they chucked it all out. I've never forgiven them for it [laughs]. George Lucas had a copy on the ranch, which their archivists cannot find. They've been searching and searching for me. I know that [Lucas] showed it to Spielberg in the early days, and it may have got left somewhere&#8230;

Do you mean to say that there isn't a complete copy anywhere now?

Well, by weird coincidence, Les Dilley, the other art director I worked with&#8230;Les wanted to be a producer. We weren't working so I said 'I'm going to make this film'. He said 'Oh, I want to produce!'. I had to go and sit with his wife and say 'Listen, I've got no money, nobody's going to get paid - if he's going to do this, you've got to be okay with this'. So in the end he did come and do it.

Les called me out of the blue after about a year and a half, two weekends ago. We were catching up and talking about Black Angel and he said 'Well blow me, I made a copy!'. I said 'From what?'. He said 'You gave me a print!'.

I remember now that you got three prints, in the early days, from Rank. There was a bit of slight re-grading to do on his one, a few shots, so we gave him that print. So I've got a print of it now at my disposal. I have a half-inch copy. I regraded it - when I was doing commercials, somebody cancelled five hours of time at one of the best facilities in Los Angeles, and the owner, who's a friend, phoned me up and said 'Do you want to use this time?' , so I went and regraded Black Angel. And I have a three-quarter inch of that in storage.

But do your other plans for the Black Angel story make you think twice about releasing it?

Do you know something? I'm wrestling with this. I was talking about it yesterday. I still get letters, still get emails, there are threads on the IMDB going on and on about it - people guessing the story and how much it affected their minds&#8230;but I just wonder if I brought it out now, thirty years later&#8230;
Click to expand...
I don't know if this Wired article references new developments or is just a new interview...
H

Full werewolf off the buckle

This short sounds amazing. I'd be willing to pay a few bucks to see it.
M

As someone who actually saw ESB in its original theatrical run, I vaguely remember this. Would love to see it again, because really all I remember are images.
A

get some go again

thought you guys were talking about this classic.
A

Sounds good to me!