LTTP: Neo Geo Mini - Did anyone else get this?

I wonder if any fellow Gaffer here has bought the Neo Geo Mini?

Anyway, me and my brother are having a blast with it, despite the fact that it's not a portable console--it needs to be plugged to a USB port at all times.

Also you have to pay extra bucks for the controllers and you have to buy a mini-HDMI cable if you want to play on your TV. I wish all of this was included in one package, but it's not a dealbreaker.

The Japanese version has a large variety of games from King of Fighters 94-2003 to Samurai Showdown 2, Real Bout Fatal Fury, The Last Blade, Mark of the Wolves, Metal Slug, and some others. The Neo Geo library is truly timeless.

It's so fun to have a quick session of King of Fighters or Samurai Showdown every other day, although my brother is beating the shit out of me almost every time

Having this arcade system at home is like a dream coming true and it feels like we've come full circle since 22 years ago where my brother used to borrow a Megadrive from his friend to play Samurai Showdon on it. 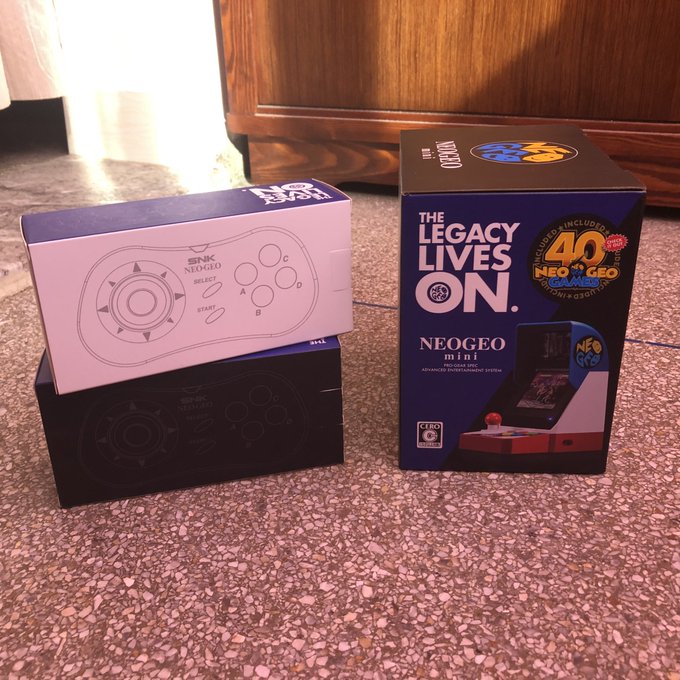 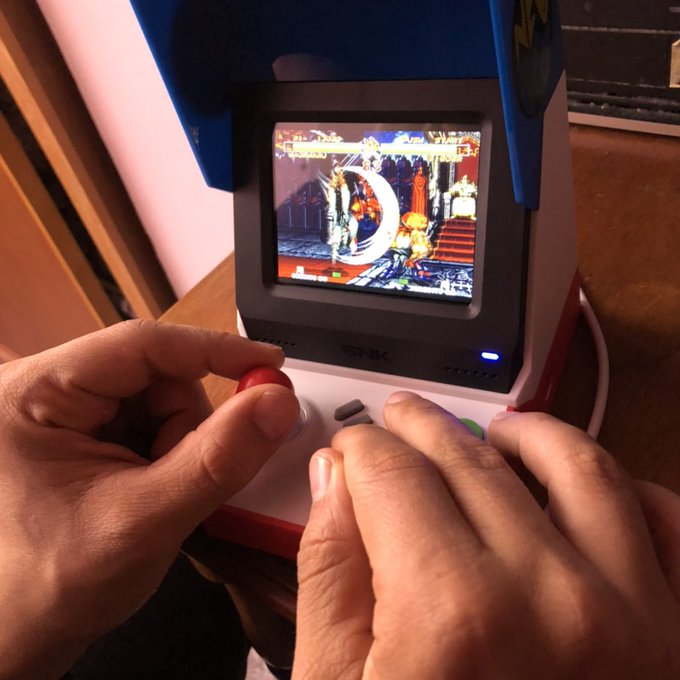 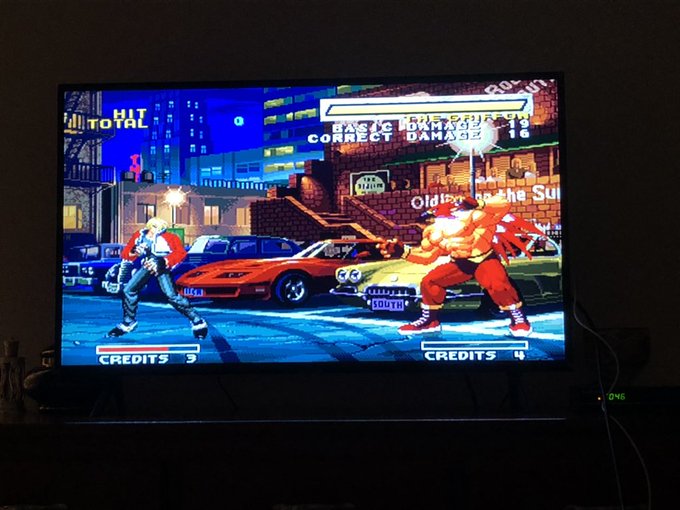 That reminds me I need to try mine out. Few months back I got one the international version and a c64 mini when Amazon had them cheap, but I didn't get around to trying them yet.
Reactions: ProgenitorCastle and ValiantTraveler

Yes I bought one. I love it. Got it on a black friday sale via Amazon for only $69. It's so damn good.
The build quality on it is quite amazing being it's so small yet fully functional. If you're any type
of Neo Geo fan, you really need to pick one up before they stop selling them. I have a feeling years
from now these things will get pretty pricey value wise.
Reactions: ProgenitorCastle and ValiantTraveler
M

It's trash, the TV output has vasline filter. I wish they would just provide RAW sharp pixel 1080p output.

it's okay, but if you intend to play just on a TV the NeoGeo Arcade Stick Pro has a newer version of the emulator built into it, which outputs a far nicer (less blurry) picture.

But as a novelty, having a cute tiny arcade machine is pretty neat, and the games look great on it's own built-in (albeit very small) screen due to the native resolution.
Last edited: Jan 10, 2020
Reactions: ProgenitorCastle and ValiantTraveler

I felt the screen was way to small, I’m sure it’s a great little system but if I buy something I’d like to be able to comfortably use it.
Reactions: ValiantTraveler

The money I did not spend on the Neo Geo Mini I've just put into a DE10 Nano. I'm set for life.

Glad to see more and more people are getting the DE10 Nano.
Reactions: Tarin02543
M

My next project is definitely MiSter.

DESTROYA said:
I felt the screen was way to small, I’m sure it’s a great little system but if I buy something I’d like to be able to comfortably use it.
Click to expand...

The screen is indeed very small, it could have been larger for the same console size, there is unused space around it. However the games look very crisp on it.

Games do look pixelated on TV (and I have a huge one) but it doesn’t look bad, you get used to it.

Every time I plan on getting one I just back out. I need an actual NeoGeo Arcade machine with just KoF in it
Reactions: ValiantTraveler 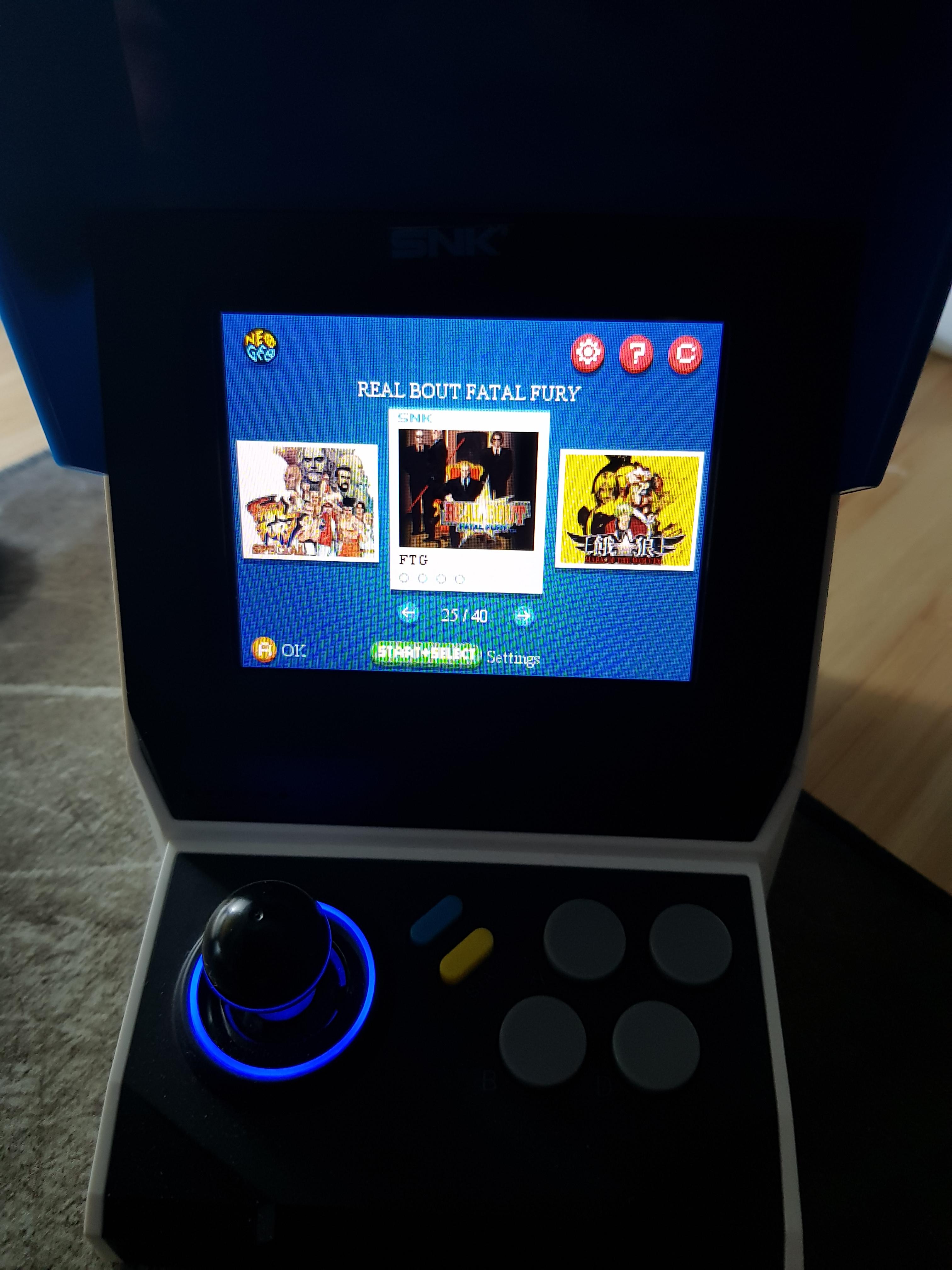 its really neat as its own thing
Reactions: ProgenitorCastle and ValiantTraveler

The last Neo Geo device that came out and was good and well polished, though with some flaws, was the NeoGeo Pocket Color.

The Neo Geo X was a disaster yet it was such a good idea.

Scale with OSSC 5x + All Games on NeoGeo AES = WIN
Click to expand...

I love my Neo Geo Mini. Discovered a few neat games from it, like Magician Lord for example (even though it's probably the most difficult game I've ever played). It threw me into an arcade frenzy by making me want an arcade joystick, which I got today as a birthday gift for myself in the form of the Hori Arcade Stick Mini for Switch, to better play arcade classics like Metal Slug using it.
Reactions: ValiantTraveler
M

diffusionx said:
Isn't the NeoSD Pro like $700 + you need an actual AES?

YES, I am a bit into Retro Gaming.

I got the international version and then the Samurai Showdown version. The video output is really not that bad.
Reactions: ValiantTraveler
You must log in or register to reply here.

May 2, 2019 started Nymphae
May 2, 2019
Sub_Level
Why the Hyper Neo Geo failed ; or why you don't send old hardware out to fight against Sega