This is originally a 2002 game, Nintendo released an HD version in 2013 and today, 2020, it feels very new. Moving to a cell shaded, ocean world makes perfect sense to move away from the last two traditional open world games.

I like how they get other characters involve (Medli in the Dragon Roost Cavern, and the Earth Temple, and also Makar in the Wind temple.) and it can draw comparisons to cooperative gameplay in another game.

The main dungeons are Dragon Roost Cavern, Forbidden Woods, Tower of the Gods, Forsaken Fortress, Earth Temple, Wind Temple and Gaon's Tower and they all play very well, some more favored than others.

You can't really have dungeons without big quests. If you've played a Zelda game before the first thing is pretty obvious, get the Master Sword, this doesn't mean the Master Sword is fully intact. Link must undergo a trial to have the sword cooperate with him at 100% power. Link restores the Master Sword and the other main quest is finding the core pieces (eight shards, to restore the Triforce of Wisdom).

The oceans and islands are very attractive and a lot of hard work was put into island variety.

Like other Zelda games you need bottles for potions to make link stronger, spending time on side quests with some feeling more important than others that reward you with items or hearts and I really give Nintendo credit here in allowing you to roam the oceans in almost an open world atmosphere and at the time of 2002 everything was linear.

Discovering chests in the middle of the ocean keeps you involved. Amazing.


I can't figure out why people chose to not finish the game, that's amazing to me

Beyond everything said, Wind Waker reminds me you can take a year or two off from the original Zelda graphics, you can hurt some people in the process but overall get a pass for providing something new. 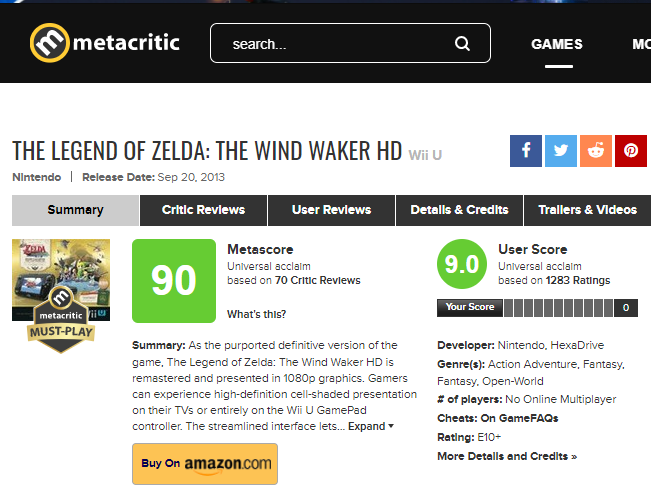 Wind Waker like other Zelda games in the end is a powerhouse and and I'd like to see Nintendo try to build more worlds around oceans.
Reactions: Bullet Club, Nico_D, QuantumZebra and 4 others

I’m trying not to double dip on games from here on out, especially since the Wii U is still connected to the TV. However, Wind Waker HD on Switch would be an automatic purchase for me. You are correct that it absolutely holds up.
Reactions: rubenburgt and Tschumi
S

I started it few yrs back, got upto where I had to find the Triforce shards then stopped as I got a new job, time passed and i lost the passion to finish it even though I had loved it so far. I keep thinking to go back to it, probably from the start but im holding out for a switch version hopefully next year. I never played Twilight Princess or Skyward Sword either so hoping for all of them.
Reactions: Tschumi

Absolutely loved it. Lots of haters when it originally released, but I thought it was something special since day one.
Reactions: Rean no Kiseki, Nico_D, Closer and 1 other person
T

At least visually Wind Waker is a game you can easily go back to. Even years after its release.

One of the GOATs. If they rereleased on the switch, I would buy again.
Reactions: Tschumi

I am playing this at this very moment on dolphin, the OG version with PC-boosted graphics... It is... I was thinking of making a thread about what magic this game is. It is without a doubt my definitive zelda experience.

I completed it when I was like 13 or whatever, but coming back to it now, I'm just struck, struck, by how stylish and clean and futureproof the whole thing is.. this game animates so damn well...

It's style, atmosphere, emotion, it just hasn't been matched by any other game.. Twilight Princess has aged 10x worse than TWW... I just can't wrap my head around all I want to praise this game for.

I haven't played the HD version, but with this boosted dolphin version I don't think I need to.

... when i was a kid, gamecube was the only console i ever got my parents to shell out for (until a cheapo chipped xbox in beijing), and i thought i was getting some kind of compromise system... but this game, alongside Metroid Prime, SSB:M, etc, made me see that the console was trying to push the envelope and bring new levels of style and futurism to the market... Looking back i think gamecube can genuinely be placed alongside ps2 and xbox and considered as the possible best of all... It might not win because of PS2's greater number of mature titles, but it could certainly beat out og xbox, which had great peaks but was mostly pretty bland... I'm not positive, I wanted to research it, but I actually have a feeling that GameCube was actually the most powerful console for particles and lighting.. and Metroid Prime was a flawless 60s fps, with ridiculously high polygon counts... Fun fact: Gamecube version of Metal Arms: Glitch in the System was graphically the most complex - you can port in the xbox textures using dolphin~
Last edited by a moderator: Nov 19, 2020
Reactions: CalmYe, Allnamestakenlol and Kev Kev

such a great experience. i kept my wii an copy of this game just so i could pull it out an play it once in a while
Reactions: Tschumi and Allnamestakenlol

I don't think this game will ever look outdated. Its art style is timeless. Such a beautiful game.
Reactions: Thurible, Closer and Hulk_Smash
L

Timeless is the best word for it. Just a timeless epic. They could spend 3 months updating the UI and sell it again and people would snap it up.

Anyone who disagrees is a
Democrat
Reactions: Nico_D and Tschumi

I'd really like to see this ported to switch. The art style really pops at higher rez

lefty1117 said:
Timeless is the best word for it. Just a timeless epic. They could spend 3 months updating the UI and sell it again and people would snap it up.
Click to expand...

4k or close resolution.
Complete the missing dungeons.
Motion controls make a return.
Gamecube controller because why not.

For any people out there trying out Dolphin for old gamecube games, I recommend Gladius. You'll need to use a specific version of dolphin to run it properly, with specific configuration, (and a gamepad, not necessarily gamecube) but it could well be one of the very best non-first party games on the system... Lucas Arts, turn based gladiator combat, school management, heaps of content, lots of customization and character classes, pretty attractive visual style (if obviously a bit dated - if they ever get it to work on the newest versions of dolphin it'll look miles better) and a wee bit of a story tacked on, to boot!

(note, I posted earlier on this thread about TWW, and how much I love it (post #8) just wanted to share this other one for people who are building interest in the gamecube and may be aware of dolphin.)
S

Not nearly as good as the Zelda games before it. Fun game but the triforce quest made me stop playing and I didnt beat it til 5 years later.

It's a nice game but it's a weak Zelda game. Can't believe they followed up Majora's Mask and Ocarina of Time with this.
Last edited: Nov 19, 2020

I think it was the first Zelda after A Link to the Past that I bothered to finish. Absolutely gorgeous game. Dunno why it clicked much more than OoT/OoT3D, but the timeless art style is probably one of the reasons.

Great game and a good Zelda. That said, imo Twilight Princess has got better dungeons and bosses.
You must log in or register to reply here.