First of all, Mafia II is being developed from the ground up as a cross-platform sequel simultaneously on all three platforms (PC, Xbox 360, and PlayStation 3). You may remember the not-that-great Xbox and PlayStation 2 ports of the original Mafia--that won't be the story with the sequel, which is being worked on by a sizable team of some 120 developers at 2K Czech. The developers have been upgrading the game's basic technology, the Illusion Engine, for some three years. The game will take place in an open world some 10 square miles in size (twice as big as the world in the first Mafia) and will stream the world's geometry in real time. Consequently, you should see no loading screens while playing, even when entering any of the game's more than 100 interactive indoor areas, such as diners, auto garages, and swanky high-rises, all of which will be packed with destructible environments.

Although the original game took place in 1920s America (better known as the Roaring Twenties), the sequel will take place within a 10-year time span between the 1940s and 1950s. This new time period will set the table for faster-paced action on all fronts, now that better guns will be available, and far better cars. The autos of the '20s were utility vehicles that struggled at speeds of 30 miles per hour or better, whereas the 1950s ushered in the era of high-performance muscle cars that were built for speed and racing. In addition, the game will have a more lenient, more realistic way of handling incursions with the law. Instead of chasing you to the ends of the earth on a minor traffic violation, the police in Mafia II will be "fat cops" who may tire of chasing you after a few blocks if all you've done is commit a traffic infraction, but they will definitely call for help if you've been gunning down civilians willy-nilly. You probably also won't want to be pulled over for a traffic ticket if you have some wise guy's body in your car's trunk. Then again, the story of Mafia II is one man's 10-year odyssey, from humble beginnings under the thumb of his hardworking but unsuccessful father to entering a criminal syndicate and eventually becoming a made man, so later on in the game, the police will be on the take and will actually help you on your way.
Click to expand...

We watched as Vito and Marty hit the elevator to meet their inside man, change into their disguises, and then head up to the posh penthouse. The joint was a highly detailed, fully stocked piano bar with a handful of mobsters in expensive suits cracking wise as we walked through the party to head to the boardroom, which lay behind the bar's wall of frosted glass. After we were waved into the boardroom on the pretense of cleaning a stain off of the carpet, the game switched to a brief cinematic sequence during which Joe armed the bomb underneath the table and then waved us out the window to a window washer's platform, where the two were to make their escape.
Click to expand...

The idea behind Mafia II's gunplay is to make it much more of a shooter and much less of a tacked-on, auto-aiming minigame. The gunplay that we saw was fast-paced and deadly. Even though you'll be carrying weapons that are conventional to the '40s and '50s, such as various handguns, rifles, and Tommy guns, from what we saw, your fights won't be the kind of arcade-style, drawn-out firefights that you may have seen in other games--you know, where you take a few hits and then casually make a run for the nearest health pack. Yes, the game will have a full-on cover system that will let you attach yourself to nearby walls and other objects, and even blind-fire around cover. Yes, enemies will also smartly use cover themselves, taking shelter behind walls and even kicking over tables to hide behind. But a few well-placed shots will do you in completely, and a well-placed bullet in the head will also take out your enemies, who will be hard-nosed mobsters but still human.

The chase through the penthouse was short but thrilling, thanks to a command performance from Mafia II's most impressive supporting cast member: the environments. Bottles and shot glasses shattered loudly when bullets began flying, small furniture got chewed up by gunfire, and after a stray bullet grazed a pipeline, the building's sprinkler systems poured torrents of water into the hallways, obstructing our view in some places. We watched as Vito and Joe ground their way through armed gangsters that stood between the two men and the elevator. At some points, the two played a deadly game of cat and mouse as both men alternately dropped behind cover and sprayed off a few shots to entrenched enemies. At another point, Joe bum-rushed a thug who wasn't fast enough to react (or smart enough to stand away from the building's windows); the poor sap was brutally beaten, picked up by the lapels of his pinstripe suit, and hurled clean through the glass to plummet to his death below. Apparently, Mafia II will also have a new melee combat system, but the details on this are being kept under wraps for the time being.
Click to expand...

So this is what the game actually looks like, or at least closer to it.
N

Mafia was awesome I can't wait to play this!
R

WTF? I remember it looking better than this, downgrade?
C

Why do all the male character models look the same?
C

I loved Mafia 1 so much, its a no-brainer for me to buy the sequel.

Nice to hear they reworked the shooting.
K

Look nice, but some reasons I didn't like the faces tho.


Dabanton said:
Why do all the male characters models look the same?
Click to expand...

Rapping Granny said:
WTF? I remember it looking better than this, downgrade?
Click to expand...

It means we were being fed bullshots. Meh.
O

I thought the trailer from last year was running on the engine? What bullshit.

Rapping Granny said:
WTF? I remember it looking better than this, downgrade?
Click to expand...

You guys actually believed those trailers that were out last year?
A

Dabanton said:
You guys actually believed those trailers that were out last year?
Click to expand...

Dabanton said:
You guys actually believed those trailers that were out last year?
Click to expand...

This is Mafia, so I will be buying the game anyway, and I love the art style, but why does the graphics engine have to look so bloody awful.

And before I get raped by people who can't look past the shiny, I'll explain: The bloom in that 2nd shot is obscene and why does the room with the piano have a solid gold sink (complete with 10 polygon tap!) and the 1st paining in the background is massively overlit and is thus a blurry mess yet the paining next to it is fine?

Early I know, but I hope the lighting engine isn't so insane, especially indoors as the game reaches a more final state.

Edit: Also, bloom on painted lines on the road, in the DRY, oh dear.
R

Yeah, definitely looks downgraded, but coming off of the joke that was the Godfather II's graphics, I'll take it.
B

except for the screencaps from the cg trailer I think it looks about the same here as it did in the previous screenshots.

Hope it's just console screens, I was really digging the look of this.

Still looks great though and should be the best crime game this year.
L

These screenshots aren't downgraded. They're simply screenshots of the console versions instead of the PC version.
R

Looking good but he looks far too relaxed when shooting guns. :lol
S

Everyone check the interview, got a fair bit of gameplay in it...
D

Mafia 2 is looking great so far. Mafia 1 was so awesome.
A

dallow_bg said:
So this is what the game actually looks like, or at least closer to it.
Click to expand...

They took down the video interview??? wtf?
I


EvilDick34 said:
They took down the video interview??? wtf?
Click to expand...

I know. Can someone upload it at youtube or something?
W

The best things about Mafia cant be shown in screenshots.
H

I have to admit those shots look odd.

No AA, and where's the slight bloom that gave all the magic to the previous screenshots?

Oh well, I love Mafia1, it still lives in my memory as one of the best games I ever played, we'll see...
J 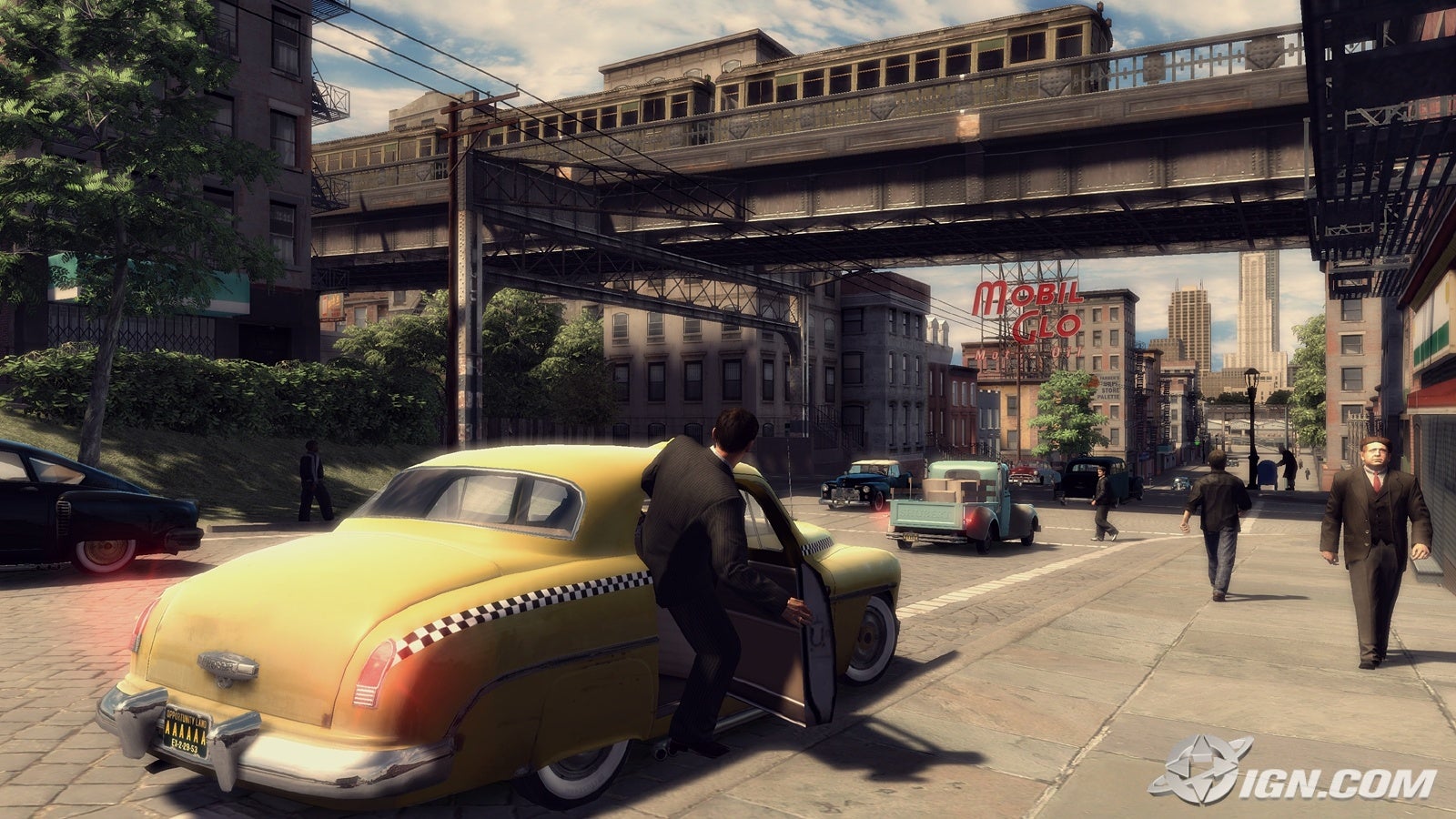 I just want a great framerate sandbox game, I don't mind visual hits. I'm in it for the fun not graphics. Mafia 2 has my interest. I like games in a old setting, or rather have the style of a old setting. Like Fallout 3, Bioshock, and Resistances.
D

If it's half as good as the first game, it's gonna kick so much ass.
N

Scrumptious! I hope the framerate is a solid 30 FPS at least.
B

must be ps3 version
S

Fuck GTA, Mafia I was awesome and Mafia II is going to be incredible. I have faith.


HK-47 said:
The best things about Mafia cant be shown in screenshots.
Click to expand...

Judging from the low-res textures, the 16:9 resolution and all the aliasing, this is obviously the console version.
S

Well those who actually played that half-assed shit that was Mafia on the consoles would surely know by now that if you want to play the Mafia series you gotta do it on PC.
S

EvilDick34 said:
They took down the video interview??? wtf?
Click to expand...

It features a lot of gameplay footage.
You must log in or register to reply here.

Aug 28, 2021 started 3liteDragon
Yesterday at 4:58 AM
Dream-Knife
2
Someone NEEDS to make an FPS that's as rage inducing as Modern Warfare 2 but doesn't need to be military based.