Starting on August 27, you'll be able to advance purchase Pack 1, Pack 2, or the Pack 1 + Pack 2 Bundle either through the Shop section* in Mario Kart 8 (as shown) or Nintendo eShop.
Those who advance purchase both packs can begin using the Yoshi and Shy Guy characters immediately

You can cancel your advance purchase by contacting Nintendo Customer Service before the first DLC pack is released.

Both packs combined require more than 2.0 GB of storage space. An external USB hard drive may be required to download this software from the Nintendo eShop. To learn more about storage options, click here.

Mario Kart 8 DLC can be downloaded only in regions where the Nintendo eShop is available.

Link, Isabelle and Animal Crossing Villager All Get Ready to Race

REDMOND, Wash.--(BUSINESS WIRE)-- Two new downloadable content packs will take the world of Mario Kart 8 in directions the franchise has never seen before, while significantly expanding game-play options. The packs, which launch this fall and in spring of 2015, and are available for advance purchase starting Aug. 27 at $7.99 each (or $11.99 for both), deliver a ton of new content, including first-time crossover characters like Link from The Legend of Zelda franchise and both Isabelle and the Villager from the Animal Crossing series.

In addition to these two new downloadable content packs, a previously announced game update goes live Aug. 27 that adds a variety of new features, including three free Mercedes-Benz cars that players can race: the modern Mercedes-Benz GLA, the 300 SL Roadster from the 1950s and the legendary Silver Arrow of the 1930s. Go to http://ninten.do/6181WR6B to view a video of the in-game karts in action.

&#8220;More than 1 million Wii U owners in the United States alone are already enjoying the fun of Mario Kart 8,&#8221; said Scott Moffitt, Nintendo of America&#8217;s executive vice president of Sales & Marketing. &#8220;Mario Kart 8 already includes the largest number of characters, karts and options of any Mario Kart game to date, and these amazing expansion packs give players even more choices.&#8221;

Each pack will contain two new cups, each with four courses, which, in total, increases the number of currently available courses by 50 percent. The DLC packs include classic courses like Wario&#8217;s Gold Mine from Mario Kart Wii, as well as new courses, some taking place in the worlds of The Legend of Zelda and Animal Crossing. New vehicles will also arrive with each pack, including the Blue Falcon kart representing the F-Zero franchise in the first DLC pack.

Mario Kart 8 owners who purchase both packs starting Aug. 27 will get access to eight new colors of Yoshi and eight new colors of Shy Guy to race with immediately. To purchase the packs in advance, users with a broadband Internet connection can click the new &#8220;Shop&#8221; icon in the game or visit the Nintendo eShop on Wii U.

The DLC packs are scheduled to include the following: 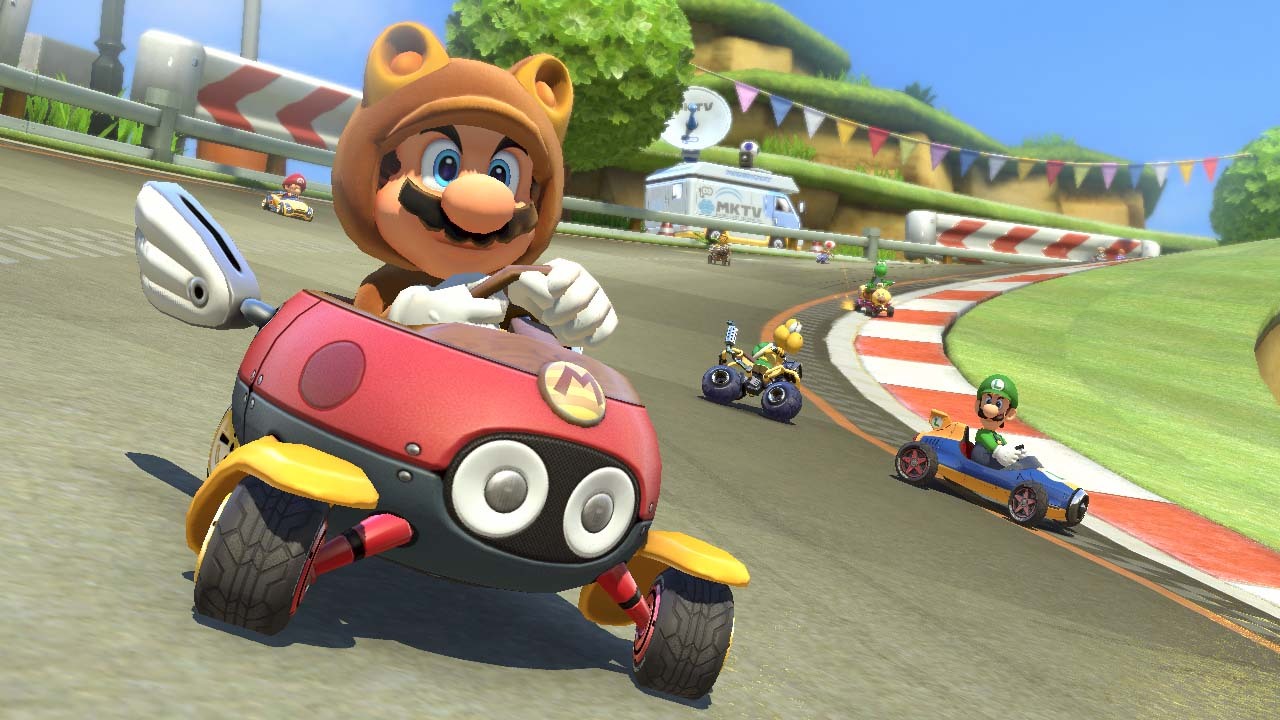 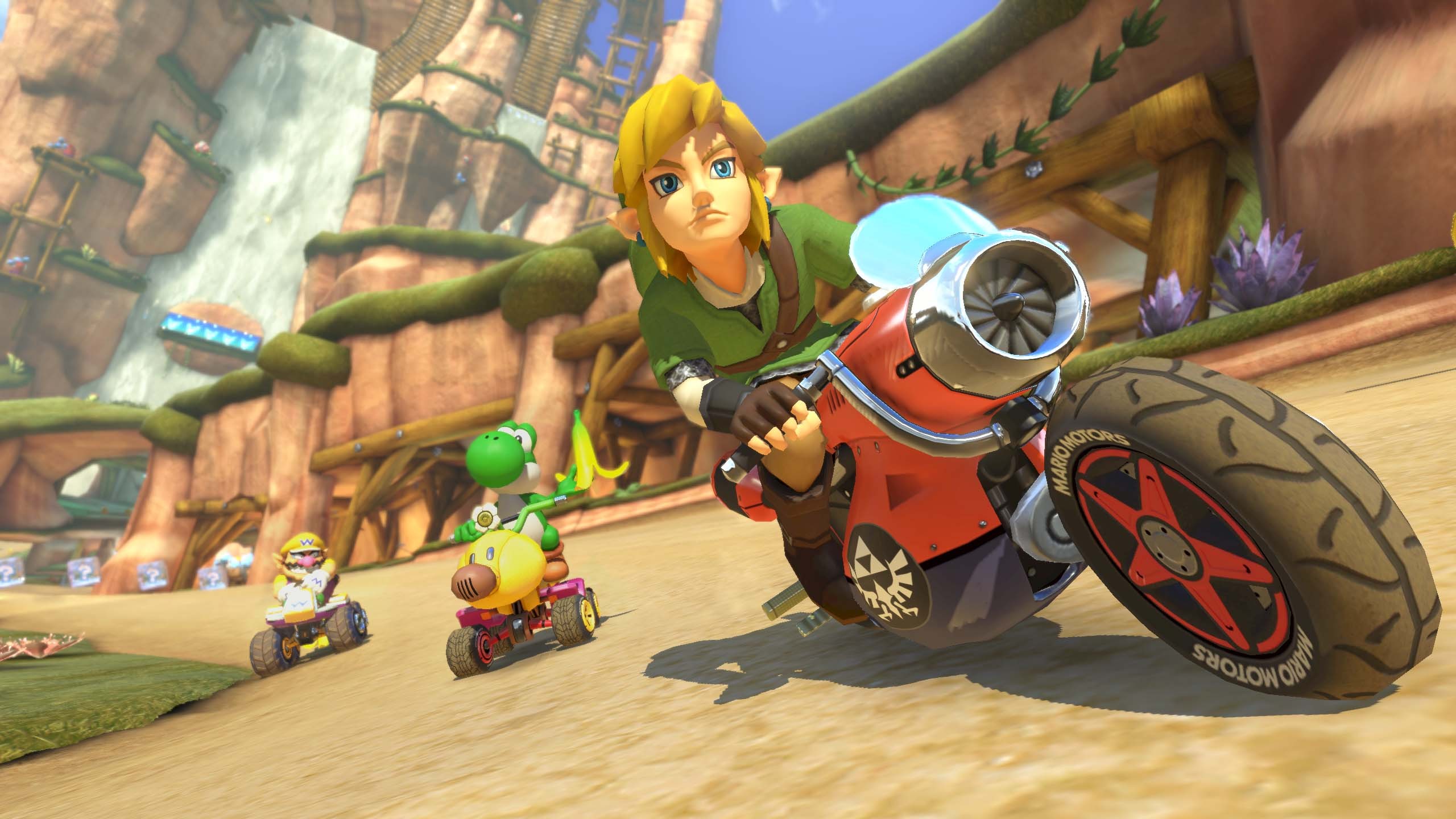 VOOK said:
Got sent screens of the minimap and the coloured Yoshi and Shy Guys.

Wow that's like the price of an extra value meal.
E

I'll be buying both.
N

12 for both packs, wow,thats how you do dlc ladies and gentlemen
N

This is more fucking hype than SSB
C

Poor Europe though. What was it looking like, seven euros each?
T

What kind of games have you been playing that make this special?
C

Nearly half the of the amount of content of the base game, for about 1/6th the price.
C

That is probably lower than anyone would've expected from this. That's a damn deal.

That is a great price.
L

Does this mean that we'll finally get Super Smash Kart in the next iteration. I can't believe its taken this long. They can still call it Mario Kart for advertising reasons but just use Smash characters instead of strictly Mario.
P

This will be the first dlc I ever purchase separately.

Good value. Worth it.
S

Zelda finally comes to Mario Kart! I love everything about this DLC.
B

Sad if anyone complains about that. That price is honestly way lower than I was expecting, especially if you buy both. What an amazing deal for that amount of content. Really impressed
T

$12 is a steal. A preorder for DLC that doesn't come out for over two months seems really silly though.
K

Fanfuckingtastic. Have my babies, Nintendo.
F

IT WILL BE MINE!
T

A couple of hours ago I thought $9.99 per DLC was a great price, and now I see this. I hope it's the same in Europe.


Tucah said:
$12 is a steal. A preorder for DLC that doesn't come out for over two months seems really silly though.
Click to expand...

The preorder is to get access to the Yoshi and Shy Guy skins.
G

Now that is how you do DLC! Nintendo be spoiling us.
A

"...pack one coming out in November."

Such a long wait, but looks great.
H

How many dlc cups were found in the game's folders again? Ill most likely end up buying this, I just wanna see all the tracks before getting it also the zelda cup sign is completely new, correct? No one found that one?
G

Bumping the total track count from 32 to 48 is amazing. Wish that there would be more Villager variations, but aside from that this DLC looks incredible! Now all they need to do is boost the lap count on N64 Rainbow Road!
V

TheAdmiester said:
What kind of games have you been playing that make this special?
Click to expand...

That's a great price for essentially another half of what MK8 had on disc in content.
Y

Wow. I was expecting at least $20 for both. That's greatl
T

Damn that price is great.
O

Only issue I have is the 2GB download. I should get a dedicated external HD for my Wii U
K

Oh and you can use the recolors for Yoshi and Shyguy if you preorder right away?! That's awesome.
V

Those who advance purchase both packs can begin using the Yoshi and Shy Guy characters immediately.
Click to expand...

I expected literally double that price.
And was willing to pay it.
B

I love you, Nintendo.
O

Unless the Triforce and Animal Crossing cup icons replace the ones in the disk data, we could potentially see even more DLC for MK8 after these packs.
V

Is Nintendo of Europe doing a combined deal? I know it's £7 per DLC.
B

Interesting 3 of the leaked icons in the game's code aren't used in these DLC packs, perhaps they have plans to do a 3 and 4 pack as well?
You must log in or register to reply here.